This week we’ve been talking about the fifth floor on your journey to the top of the tower! This floor will be all about the Temple of Seasons, and will begin in a wintery area in the woods, where you’ll walk through a corridor of trees that part and walk off to the sides to reveal a path before you, all while fae dart back and forth (just to set the tone a bit). This path will eventually lead you to the Temple of Seasons entrance, where the actual floor will begin.

You’ll enter a Temple of Seasons room that’s currently winter, but thankfully, Naniva appears and helps you by turning the room into spring, allowing you to enter one of three doors. This door leads to a fight or puzzle room yet to be decided, where you end up rescuing Autumn. Once you return to the first room, she will then turn it into autumn, revealing a second door leading to another fight/puzzle room where your goal is to rescue Summer. If you succeed in this and return to the first room he will turn the room into its summer version, allowing you to pass through the final door.

In this final room, you’ll battle an enraged version of the Hydra, summoned by the mirror guardian of the tower. This version of the Hydra has one more head, representing spring, thus you’ll have to battle the four seasons all at once! We haven’t decided exactly what the spring head will do yet, but one suggestion is that it’ll cause loads of bushes to grow in the area, serving either as an obstacle for you or something that will deal damage as well (by the addition of thorns). Another suggestion for a super move the hydra can make here is to turn the room into all seasons at once, using all of their powers for a short while… >:)

As for the puzzle/battle rooms, we haven’t made any fixed plans, but we’re playing around with the idea of having a special enemy in the shape of a rainbow orb, that will appear and turn the room into all seasons – only once you defeat the orb it’ll go back to normal, so until you do the rest of the enemies will be in their elite versions. We don’t want these rooms to be too complex, seeing as there’s still a ton of rooms to go through, but I think so far we have a good balance. Let’s see where the next floors take us :)

In Arcade Mode, we need a room you’ll get to once you finish the Ghost Ship, where you’ll get some sort of reward – and, if you’re powerful enough, you’ll get the chance to transcend into one final floor where an epic final boss battle awaits!

So, I’ve been making a couple of suggestions for what this room could look like, and this first one is inspired by what I’d like the final floor to look like – otherworldly, up in the sky, on floating isles with other floating isles in the distance having statues or parts of statues of Grindea on them: 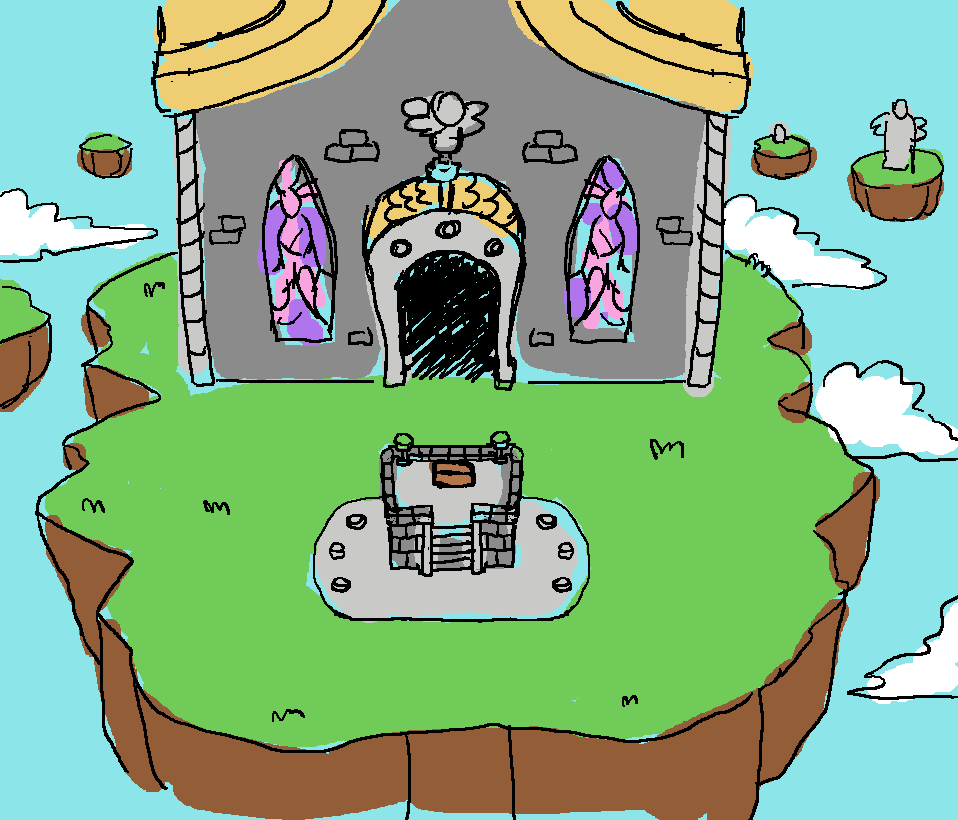 The second idea is a throwback to Bishop’s realm where you’ll be battling him in Story Mode, a grim and dark realm.. In this version, the doors of the temple will open either to an intense glowing light or straight up to the sky, if you should have enough power to get there… :) 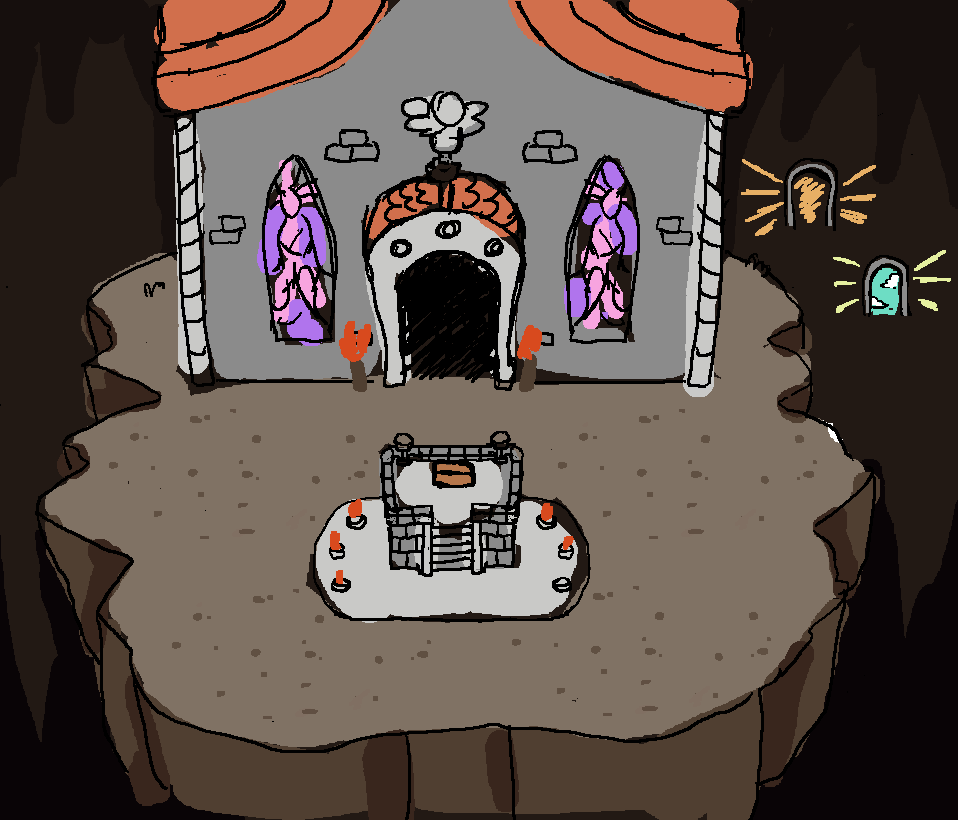 While I was sketching that room, I also went ahead and made some suggestions for the average room design in case we’d end up making regular rooms in that final floor you’ll only get to with the right power level, looking something like this: 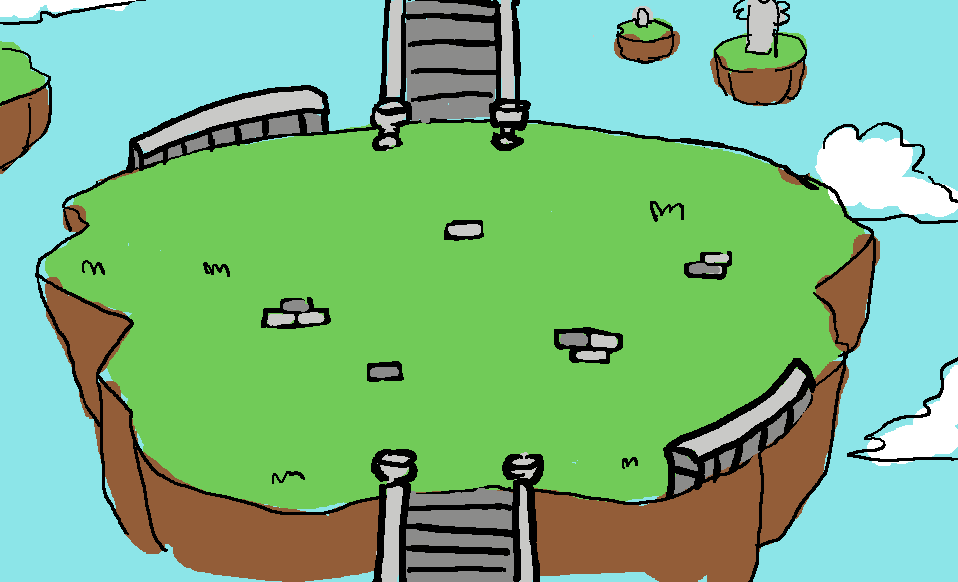 We’ve also been talking a lot about what the final tower dungeon would look like for those that aren’t under the mirror’s influence, so I’ve been playing around with ideas for that as well. Here’s one such suggestion, featuring a lot of mirrors on an otherwise gray tower setting: 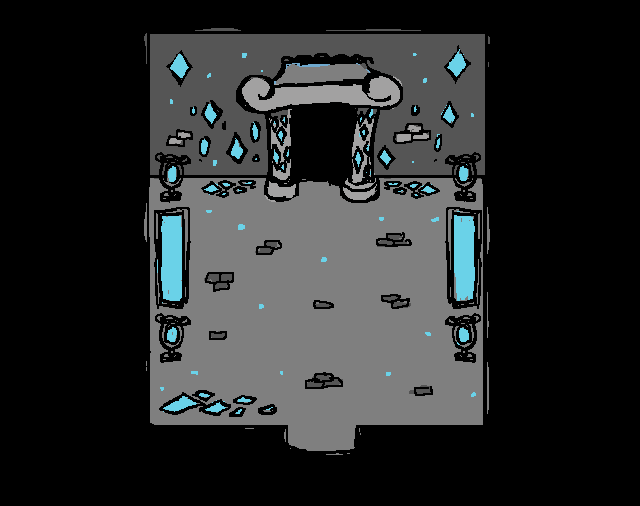 There’s a big possibility we’ll redesign or at least change the colours of the tower exterior now that we have a better idea of what the inside involves, but we’ll figure that out once we’ve completely decided on a design for the interior :)

Now, one of the many things Teddy has been working on recently has been adding a bunch of smaller cutscenes and fixes for the various new quests. One such thing is having Bishop appear during the Ghost Ship quest for a short while, and to make his appearance look as good as possible we went through a bunch of iterations. Here you can see our progress, going from pretty crude, to working our way to a more polished version:

Most things we implement go through a bunch of iterations like these, which goes to show implementing the first idea you have just the way you imagine it isn’t always the best bet :)

Meanwhile, Fred has been working on not only Bishop but Grindea herself as well: