Once again, Teddy have been hard at work in the Skills Workshop. This week we present the third and final skill of the Air-tree, the Wind Slash. 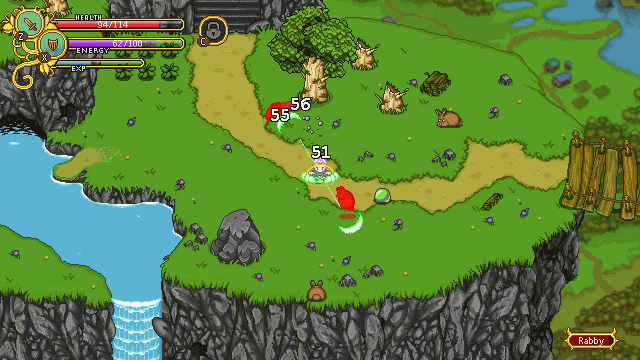 The Wind Slash is another projectile based skill. What makes it  stand out from the rest of our skills is the way you fire the projectiles.

The moment you start charging the Wind Slash, a spinning, double edged arrow appears under your character. Once the charge is released, two Wind Blades will shoot out from the character in the directions that the arrow is pointing, damaging all enemies they pass through.

At higher charge levels, a second arrow will appear spinning in the opposite direction, firing an extra pair of Wind Blades. This makes it possible to land double hits if the arrows are aligned during the charge release.
The Wind Blade is deviously hard to control, demanding good positioning and timing. If used correctly however, it has the ability to deal tons of damage to multiple enemies at once!

Other than skills, we’ve spent a good amount of time focusing on balancing Arcade Mode. Besides changing a ton of small things such as damage numbers, item costs and skill nerfs, we’re also investigating changes regarding health recovery.

The health recovery is a major element that really ramps up the difficulty in Arcade Mode compared to Story Mode. In Story Mode, every enemy has a chance of dropping a Health Orb which restores some of your lost health. The chance of enemies dropping orbs is also increased the lower your characters HP gets. To top it all off, your death only means having to replay a small portion of the game!

In Arcade Mode, Health Orbs can only be obtained by either clearing a floor or receiving them as a reward for clearing a Challenge or Bet. While this makes things a lot more unforgiving and challenging (which is what we want Arcade Mode to be!) it also makes it incredibly difficult to mount a come back if you’ve taken some heavy hits in a room, and if you die, that’s the end of your run.

To mitigate this, we’ve messed around with adding a small health regain every time you managed to clear a room quickly enough to get the S-grade. What (we hope) this will do is promote more aggressive and risky play when your characters HP is low in hopes of receiving the S-grade and added health regain.

One drawback to this is the creation of an artificial “skill bump”; a player will get better and better at a relatively steady pace, but when he starts getting S-ranks with some consistency the game suddenly becomes easier, possibly causing an unintended spike in the player’s progress. We’re still experimenting with this to achieve the best balance!

In addition, or as an alternative, we’re also adding a nurse, which will appear at semi-random intervals and offer you healing for cold, hard cash. The more health you’ve obtained this way, the steeper the price! Our hope is that this will make gold management more interesting than it is now, since buying a better weapon in a shop might mean less healing if you run into a nurse, and the other way around. This solution also opens up healing to every player, regardless if they have the skill to clear a room with S-rank!

The balancing act of both Arcade and Story Mode is a task that we’ll keep wrestling with up until release, but hey, that eternal struggle is one of the twisted appeals of our trade :)


Cool as abilities and wicked work with the health, some really good ideas there.

An idea for the wind slash. Maybe the longer you channel it the faster the arrows go and the more damage they do.

You know, go full charge to deal heaps of damage, but you really need good timing to let it go.


Did you guys create the game engine from the ground up?


Do the arrows for wind slash start in the same place each time it is cast, or are they randomized?
I’m guessing randomized, but felt it was a good idea to get clarification. Since we can only see one cast in the animation.


I’ve seen the wind slash on the stream and I think it’s a pretty good idea. It really needs the right timing to use it efficiently.
The health recovery thing is very good and necessary! I barely made it to floor 2-1 and I think it’s almost impossible to get to higher levels.
There is one thing going through my head: There is this new frosty friend. But what about normal pets like rabbys and slimes? Weren’t they supposed to fight, too?


Oh god that Nurse looks intimidating with that needle. Awesome!

I like the idea of rewarding bold play. Careful methodical play should have benefits but so to should being decisive and quick and “skilled”. Saying that, some of the highest skilled players are so good because they play carefully, so I’m only using the word to communicate.


I dunno how I feel about health being more plentiful. I can consistently reach the bottom floor in the demo at the moment without any difficulty. Seems it would diminish the challenge if you could heal up all the time.

But if you guys are making it harder to compensate for more HP, I guess that’s cool. :)


You guys are really creative with your skills. It’s nice to see a variety of quality skills rather than a bunch of clones like in other games. I also really like the giant syringe!


@The7thLegion: Interesting idea! We’ll keep it in mind if we feel we need to spice it up :)

@manablight: Depends on your definition. We’re using the XNA 4 framework and Lidgren Networking library, but the rest is home cooked!

@Sogomn/J: With the new systems and balance changes, arcade mode will become slightly easier for people not using the “broken” spells (Fireball/Ice Spike/Nova) and it might end up harder for players relying on the excessive magic damage scaling in the current beta build

About pets, the regular ones you catch currently won’t do battle with you like the frosty friend, mostly to save some development time, but also to make using combat pets a more unique decision.