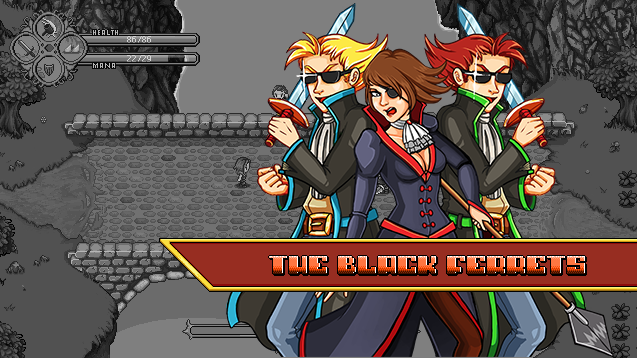 
I haven’t commented the last few weeks, but the gif of that battle looks too awesome to be passive this week. Good job. I also like the slime with the apples ^_^.


Game is looking great as usual! Can’t wait for the next update!


Wow, looking good! Something simple as that candle stick getting chopped up is animated so well! That portrait looks really nice, too, and being able to see the different stages of it is very interesting. The line art on it looks exactly like the anime/manga style but the style of coloring makes it unique.

A tip for the boss portrait of Vilya’s gang:
The hands on the sidekicks don’t look like they are gripping swords. Clenching the fist more and bringing the swords closer to the body should fix that. Right now the hands look too open and like the swords are being held by their fingers, when it should be the whole fist. Hopefully this helps, I don’t mean to insult the work.


These are looking very well done! It’s also cool to see you update some old things like the card. Really shows how the artists have improved/made progress while working on the game.

Regarding the fight, it’s looking a bit cramped to be able to really dodge things. But I do like the sword spin thing that shows you where you need to dodge to. Can’t wait to see what happens with this battle.


Game is really coming along great. I’m looking forward to another boss battle!
Also, What are those strange keybindings in the first gif? They look like sD and sZ can you bind button combos?


@ninjagabe: Kind of! You can use shift and control as modifier buttons!