And so, it’s time to begin making the Third Tai Ming zone for real. I (Vilya) can’t believe we’re finally starting on the last stretch of this dungeon… It’s taken a looong while for sure :D

In this post, I’ll be making the basics of the first map, which features the entrance to the sacred shrine where the artifact you’re after sleeps. There’s a lot to add – walls, grass, the platform and the building on top of it. Some things can be reused from previous maps (parts of the architecture and the cave walls), others have to be made from scratch (such as the platform and it’s decoration):

After all of that’s been made, I add trees, bushes and rock with our editor tool. Finally, it’s back to Photoshop to add flowers and grass decorations! Once all of that’s done, we’re left with the basic version of the area: 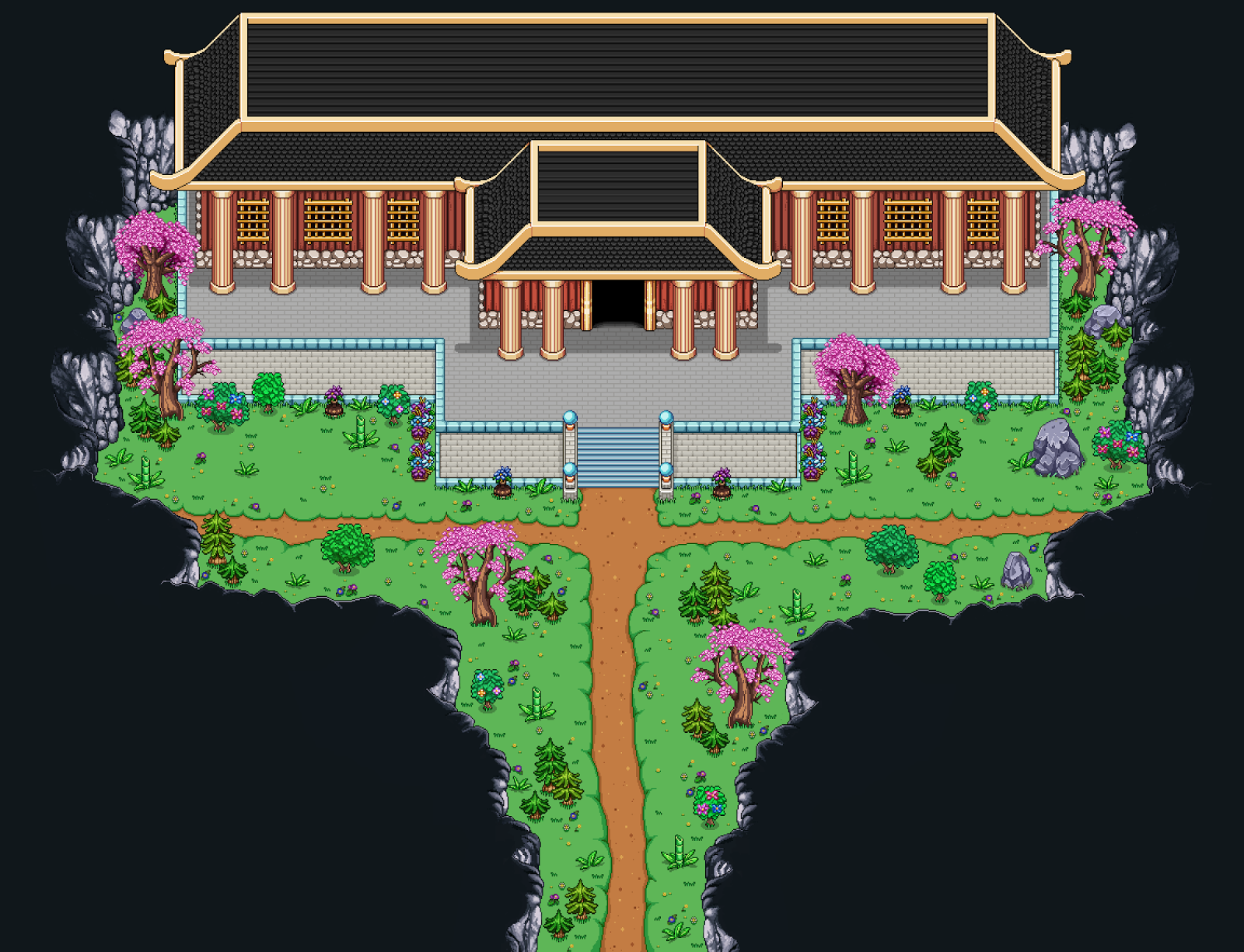 Now it’s time to think about the various ways we can spice this up and make it look more unique! Let’s begin by adding some banners around the platform. Too much stone texture never made anyone happy, after all, so let’s break it up with some cloth:

The cutscene you’ll see here is all about celebration (which may or may not end in a strange way… but more on that later), so I added some pennants hanging from the roof as well:

There has to be some kind of light source around here, and what better than some lanterns? I add a bunch of them between the decorative cloth around the platform:

Next, the most fun part. Painting some bells! They felt like a nice addition to the sacred shrine, and may or may not begin to chime as the celebrations proceed (we haven’t discussed it in detail yet):

To make the parts of the shrine building that’s behind the entrance look a little more interesting, I decided to remove the middle window and add a couple of statues instead, as well as some crates with flowers to decorate this holy place:

Finally, some additional flower decoration, to make the statue look less out of place against the floor, and add to the festive feeling: 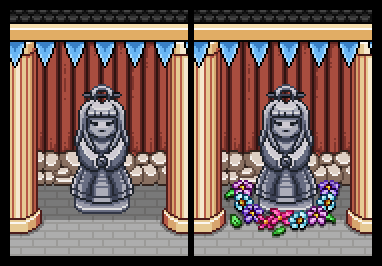 And now, here’s the map after all the decorations have been added! Looks a little more interesting now, I’d say: 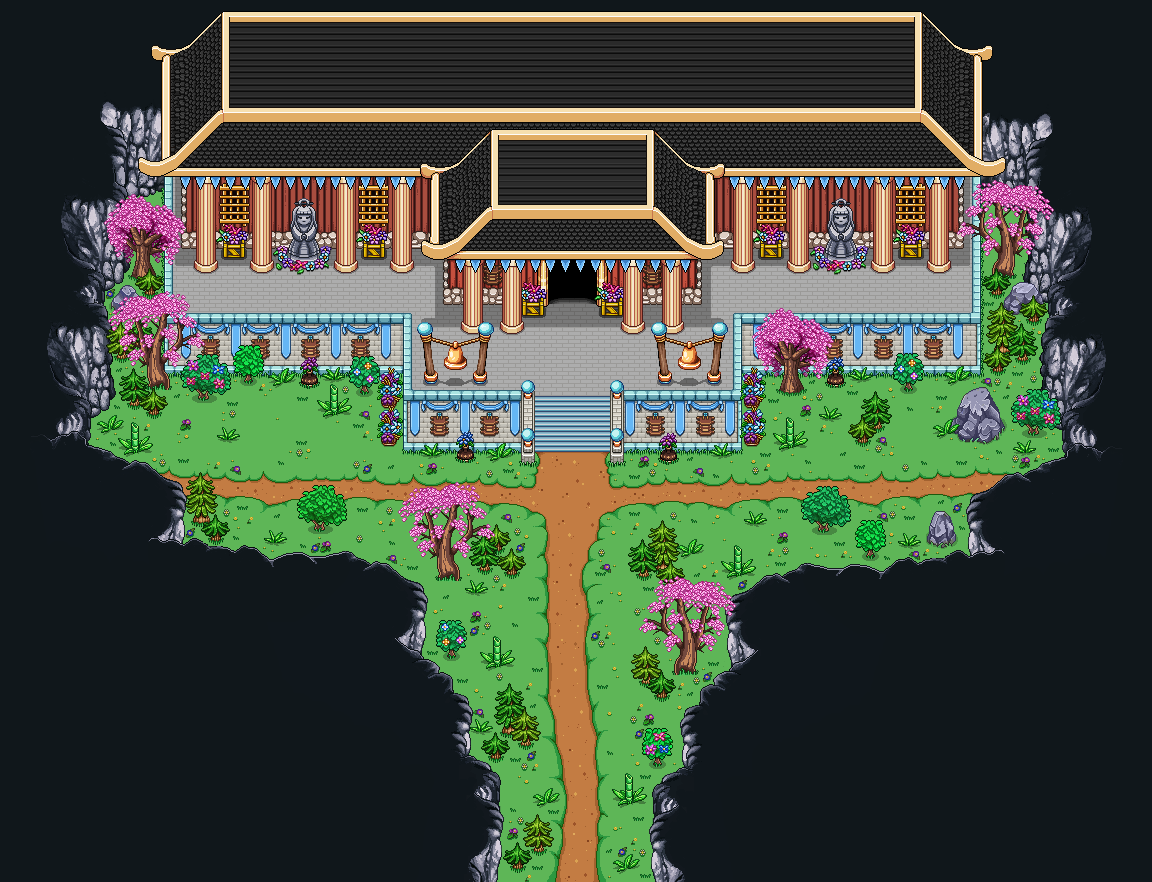 But let’s not stop there! As the years go by, even this sacred shrine is forgotten and doomed to fall into disrepair.

Working on this was pretty much a case of “how much of this can I ruin?” and then setting to work. The lanterns are broken or have fallen down, some of the pillars have fallen, there’s some vines growing, the bells have fallen, statues have broken, cloth have ripped, and sometime in the past people began to move a lot of storage stuff outside of the shrine, leaving broken crates, jars and barrel there now.

There’s still a lot of fun things I’d like to add, but at some point I had to stop myself, or I’d keep going on this for days! Maybe I’ll go back and add some more stuff before everything gets implemented though :)

Feel free to share ideas on how to add further destruction to this map (so long as the building itself remains intact)! 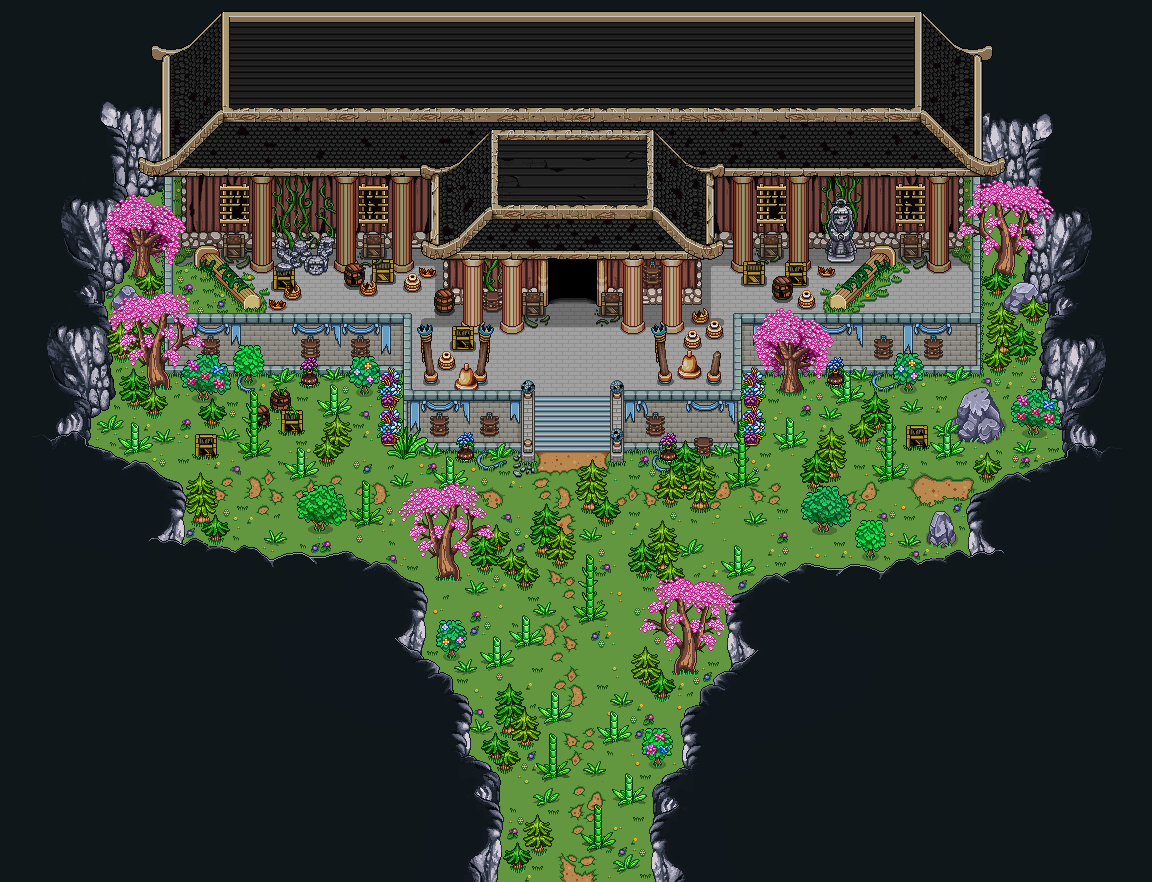 Aside from beginning on the third and final part of Tai Ming, we’ve also continued improving the second zone, polishing the area up a bit. One of the major improvements we’ve added is a ton of water effects, since the water was quite stiff earlier! Here’s a preview GIF of what it’ll look like once it’s been patched into Frontline:


Maybe you could try adding some cracks on the stones on the floor/walls that the shrine is built on top of. In comparison to everything else in disrepair, the stone itself looks still in good shape.

You could try adding some moss on the lower parts of the wall too, seeping through some cracks in the stones as well.


The main thing that I think is missing in the ruined temple is that entire columns have collapsed, but the roof is still intact and pristine across the long flat sections – there should be sections of tiles broken away/sagging/some holes (which allow light and water inside the appropriate internal area)
Also unless the pillars are made of Styrofoam they should have broken apart when they hit the ground
Also agree with the above comment
Other than that, looking good


If you’re still looking for feedback, I agree with Tim about the roof – if the columns are starting to fall over, no way the roof only has some tiles missing. I’d also say that the columns that are still up look remarkably unscathed – maybe give them some moss/vines too (like the fallen ones) or have them look like they are starting to crumble … or maybe a divot out of one where maybe those townspeople with crates smacked into it, something to make them look more worn, anyway. Same goes for the floor/foundation, really – you’d think it would look more worn as well.