This week was a very special week, since the annual GGC was hosted (and also the week where we launched housing on frontline – go check it out)!

GGC is short for Gotland Game Conference, which is basically a game expo where the students at the game design education showcase their game and a bunch of people from the industry is invited as judges to give feedback and select which ones did the best. It all culminates in an award ceremony with an after-party where we all get a chance to hang out together and share experiences with other game developers. So basically, it’s great!

For those of you wanting a glimpse of all the game presented at the conference, check out this video:

One of the showfloor favorites, and clear winner of many of the awards at the award ceremony was this little gem called Pump the Frog, made by a bunch of first year students: Totally charming and so well polished. It was hard to imagine they only had 8 weeks from start to finish, incredibly impressive work! It’s also nominated for several SGA (Swedish Game Awards) categories, so its success might continue on to other venues as well!

If you want to know more about the conference or would like to see some cool pictures from the showfloor and presentations, head over to the conference website!

Now as I mentioned, this week we also launched the housing system, which is now playable on frontline! So, when we weren’t at GGC judging games and hanging out with fellow game developers, this week was all about some last minute housing polish, finishing up the remaining details and the graphics needed for them!

First up, we realized there were some more forgotten things we needed to take care of!

Some miniatures for the carpets from before, for example: 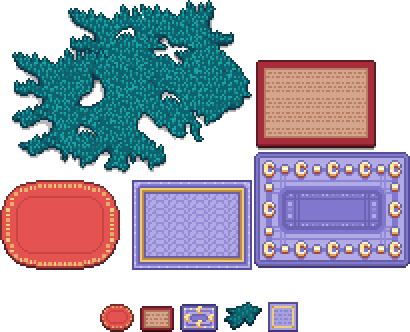 And then, a couple of items some of you have likely had in your inventory for quite some time! The red slime carpet and the green slime bad:

Hopefully that’s the last of our forgotten objects, and we can now focus on just adding new ones in the future :)

As for the housing system itself, the way you get the house, for now, is that once you’ve completed Flying Fortress, the scientist Kim will appear in Evergrind City next to your currently not-yet-built house, explaining one or two things about the science behind the houses in the game (and your own)! 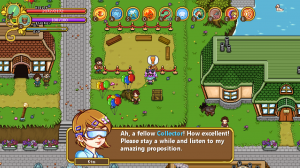 She also wonders if you’d like to help test out some new systems, and upon agreeing to do so you’ll be able to purchase the house from the carpenter, who will build it for you. After this is done we plan to move Kim back to the lab in the HQ where she’ll continue doing other experiments (gotta keep busy, you know)! 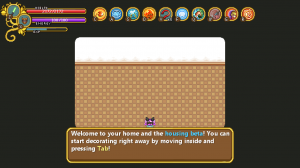 As for the house, once it’s been finished (this happens once you change screens once), you’ll get a very short and basic explanation of how to use it upon entering the building.

We’ve continued working on the icons that illustrate what tool you’re currently using, and here they are in action: 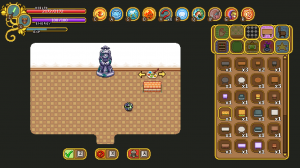 First up, the style icon (seen above). After some thinking we’ve decided the arrows for each of the icons need to be remade, and it’s also missing a proper outline and an animation at this point.

Next, the carpet tool’s “carpet version”:

For this one we’re actually considering using the old version (seen below) after all, to make it stand out a bit more from the carpets you’re editing.

Finally, a GIF showcasing both the stack and the move tool:

The stack tool (as well as the carpet tool) don’t use the correct freeze frames in these GIFs which means the animation isn’t paced exactly right (it’s supposed to pause for longer on each stack), but it gives you an idea of what it’ll look like. The move tool is missing an animation in these GIFs as well, but it has since been added to the game. Finally, we added outlines to all the icons, which made them stand out a bit more against the background. This can also be viewed in the game.

We did have a discussion regarding whether or not to use a more simplistic style for each of these (like the old version of the carpet tool), but decided against it in the end. This way there will be a little more color, and hopefully each icon will stand out enough on their own once the outlines and proper animations have been added!

As for Fred, his main focus has been getting all those housing icon moving. Here are the finished icons he worked on:

We didn’t talk about the hand tool much in the previous post on housing, but the hand tool is a very basic tool accessible from the housing menu that allows you to move around your house and select any furniture piece you want (which in turn brings you into the other tools). The hand tool is also connected to your skin color in-game, and matches that of your character.

Here’s the new and improved move tool! We changed the arrows quite a bit, both in shape and color, plus it now moves and has an outline. It works a lot better than the old version, to say the least!

There’s also this new and improved version of the carpet tool icon (above), and the stack tool which you’ve already seen, below:

And here’s the style tool, a little bit interesting now that the brush is moving about:

Finally, Kim got a slight redesign to better resemble her portrait as well as an additional animation. In her regular one, she’s doing some chemistry stuff, mixing a liquid of some sort. While she’s outdoors telling you about the housing science, we thought we’d give her a different animation to better suit the theme (as well as one that doesn’t make sounds every few seconds):

We currently haven’t decided whether she’ll pick her chemistry set back up once she returns inside, or if she’ll continue using her newfound tablet instead!

Now, if you haven’t tried out the housing system yet, go ahead and let us know what you think! We’re eagerly awaiting your feedback :)


Oh man, the pixel is just too overwhelming! I love it too much! Especially the animation


Housing still seems to have a few clipping issues, but overall the system seems to work pretty well. I wish more items were available; I tried to mix items from two sets together, Mt. Bloom and the Halloween items, but ended up feeling that more clutter was needed. In addition, I was surprised that I could only turn chairs 90 degrees in each direction. I hope work on the housing system continues and multiple rooms will be available so I can make a lot of fun themed rooms.