Last week was all about the Arcadia Rework for me, something which will continue to be the main focus for a long while to come. As you can tell, it’s coming along at a steady pace, one building at a time!

This week I will begin creating the underlying decorations, grass and paths between the various spaces. Since we’re also fairly sure about the Utility skills, I’ll also start creating their icons, while Teddy and Fred continue to deal with testing, testing, testing and skill graphics!

We’ve had two major discussions these last few days, both in regards to the new Utility skills. First, about the buffs: we are currently disagreeing whether it’s better to keep them as we originally planned (one buff for the offensive stats and one for the defensive stats), or to separate them further. Specifically, there’s an idea it’d be more interesting the have speed be it’s own buff, allowing the current Haste skill to remain (only balanced so it’s more useful). However, there are those of us who feel the “package” buff is a more interesting buff to use, even if it means the speed stat won’t be buffed as much as it could have been if it were its own buff.

Currently, we haven’t actually made up our minds about this! What do you think you guys would prefer? Two buffs: one for offense (damage, speed, crit) and one for defense (defense, shield reg, EP reg), or three: one for damage and crit, one for speed, and the defense buff left as is?

We’ve also talked about the amount of silver points spent on each Utility skill. We’re considering whether to have each skill have 5 levels (as was planned), or if it’s better to cap them at 3 each.

With 5 stages, the skills become more of an efficient silver point sink, but the skill improvement between each level will be rather small. With 3, each point spent on the skill will give a bigger upgrade, but you’ll also finish leveling the skills much sooner. Currently we’re leaning towards 3, as it seems more rewarding to the player that way, but we haven’t fully made up our minds yet.

If you have any ideas in regards to these discussion, feel free to share in the comments! We love to hear your input and what you think about decisions like these – after all, we want to do what’s best for the players :)

Now, last week we left Remedi with his wagon surroundings looking rather empty! Time to remedy (ha) that, and give him some fancy flowers for his collection:

The idea is that, before you’ve unlocked this plot of land, the wagon won’t be there at all, leaving only some dirt in a half circle. A sign describing what will appear there will be in the middle of it, and we’ll probably use some flavor text, such as describing how an alchemist might be lured there if you just get some interesting plants for the dirt (done automatically by paying the amount needed by the sign).

For now, this is what it looks like in its completed form: 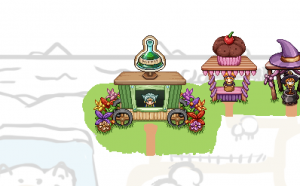 As Arcadia continues to grow, it’s time to add that central piece of decoration, right below the mountain where you set your course for another arcade run:

It’s a well! And not just any well, but one of those visual plots that will help increase the number of people entering your town! Instead of being functional in the sense it adds a specific mechanic, it attracts NPCs that might give you a quest or two :) 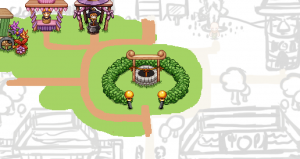 And here’s the progress on the big map: 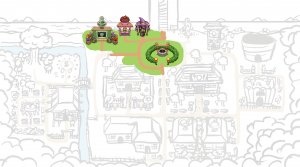 In the portrait department, it’s time for another kid roaming the streets of the desert/harbor town:

I have all kinds of ideas for this NPC, though I’m not entirely sure they will actually be realized, so I’ll keep quiet about them for now. All I can say is that Heero Yuy of Gundam Wing might have been an inspiration!

Finally, what Fred and Teddy has been up to: more skill work! The graphics for the Utility skills are coming together one by one, and here’s a few examples of the Barrier skill, tarting with it’s breaking due to a bee attack:

In the current iteration we’ve decided not to go with our original plan, which was that a barrier break like the one seen above would cause you to take the remaining damage (if any) after the last of your barrier hp is used up. Instead, it’ll now absorb the whole attack, keeping you safe from harm even as it’s close to breaking. Our reasoning for this is that it feels more satisfying being able to completely shield yourself from harm, especially against strong enemies which might be able to hit through the barrier with just one attack. We’ll balance this by lowering the amount of hits and hp the barrier can shield you from instead, but if it still ends up too OP we might bring back our original plan.

Of course, after a barrier break you won’t be able to recast the skill for a little while as well, as seen above.

Next, what it looks like as it expires due to the time limit:

After about 10 seconds it fades out, at which point you can recast it so long as it didn’t break due to taking too much damage. Finally, below, you can see the perfect guard effect as you bring it out in the right moment against a bee:

And here’s a closer look at the effects:

We’ve also begun implementing the Death Mark graphics seen in last week’s post! We are, however, considering changing it slightly, perhaps making the sword red and adding a skull, making it better fit its rather ominous name!

And to end this post, here’s a first iteration of the Challenge skill:

This, too, will be further improved. Below you can see an effect that will be added to the animation, to better indicate in which direction you aim your skill. Eventually there will be a speech bubble with curses thrown at the enemy as well:

Onwards we go! With some luck, these skills might be available as soon as this weekend for Frontline players, but it depends a lot of any more bugs that may surface as we continue to test these out. Fingers crossed!


First and most important:
Skills should cap at 3. They are utility for a reason. Having main spell maxed and bunch of spells for diffrent situations is much better.
Secondly, I feel like there should be 3 buffs, because you get way too much DPS increases (dmg crit AND spd is way too much for being utility skill)from using just 1 ability.


The death mark skill probably shouldn’t flash red and blue, as flashing red and blue lights were reported to cause seizures in the Porygon episode of the Pokemon anime.


Three buffs would be better in my opinion since it allows each buff to be more useful in it’s own right and allows a bit more control/decision making for the player to build their own unique character.


I don’t think Ninjarock fully understands epilepsy, flashing red and blue is fine if you don’t make it too intense (like that episode was, since it flashed very bright and extremely rapidly), if it was the colors rather than the intensity and rapidness of the flashing, police themes would be absent from every game on account of their red and blue flashing lights. I for one am all for the red blade with a skull, that seems very fitting.