Truly, last week was not so much about art or programming as it was testing. We really want to get the balance right this time, so we’ve decided to play through the game at least once per skill, giving each of them chance to be the main skill in a playthrough. It’s truly a challenge to tweak the numbers to make them mathematically balanced vs each other, without losing the soul of each skill.

Because the game is already quite a few hours long, and we want to make sure each skill scales well as the play progress through it all, it means A LOT of the work week has been spent “simply” playing the game over and over, taking notes on how each skill feels at various points of the game. To our aid, Teddy has made a number of shortcuts, i.e. we can now walk through walls to skip certain puzzles. That’s basically the only skip we use, though, as we still want the level and gear to be as true to a real playthrough as possible.

With each skill completed, we’re getting close to evening them all out, and right now most of them feel a lot more powerful than they did previously.

As we started playing the game using the new version of Blade Flurry (shown last week), we realized we weren’t quite satisfied with the way it looked now, so Fred took a small break from testing skills to make a third version, which is kind of a mix between the two earlier ones (note that this is currently a WIP and hasn’t been fully finished yet):

Chain Lightning will get a slight rework. Instead of seemingly randomly jumping to any enemy within a cone-shape before you, the skill will now favour the enemy you’re looking straight at (though if there isn’t one there, it will jump diagonally still). The main target will then take a bulk of the damage, leaving less damage for secondary targets the lightning then jump onwards to. We hope that by making this change, the skill will feel more satisfying to use, as you can select which target you want to kill first rather than doing rather underwhelming damage to a bunch of them.

The Flame Thrower might get reverted back to its original form, where you could move and damage enemies at the same time, although your movement speed while using the skill will be greatly reduced based on your cast speed. This will, at least, likely be true for Story Mode, where it no longer feels very strong compared to the other skills that got buffed. However, we have not tested these things out in Arcade Mode yet, so it remains to see how OP it feels there at the moment.

Balancing skills between Story Mode and Arcade Mode will probably be one of the biggest challenges during this rebalance period, as the modes are so vastly different from one another. In Story Mode, it’s rather unlikely you’ll ever be as tightly surrounded by enemies as you tend to be in Arcade Mode, which means some skills will work a lot better depending on which of the modes you’re playing. We’re trying our best to balance this without having to change any of the skills EP cost or damage in just one mode.

And in other news, we’ve decided to make respeccing a lot cheaper than it currently is. For a while we considered making it free, but we feel a low cost will give the player a bigger sense of impact as they level skills, compared to if you could just change things around free of charge at any time!

Hopefully, our great rebalance will draw to a close this week, as we all have looking forward to taking a week’s break from 4th and 8th September, just to recharge the batteries before the great long autumn and winter rolls over Sweden. Finishing the patch up just before then would be ideal, as we would be able to return a week later and go through all the accumulated feedback. Fingers crossed!

Now, as more stuff is added to the new revamped version of Arcadia, it’s time to create the Cinema! While we’re still not completely sure this will be available at the end (it kind of depends how well we can solve some of the issues with the mechanics), for now we’re fairly sure we want it there in some shape or form.

Inside the cinema, you’ll have the option to replay previous arcade runs and show them off to your friends. It won’t affect your current runs in any way, but we feel it would be interesting to be able to review a previous run and see where things may have gone wrong – or simply use it to brag of your achievements in front of your friends ;) 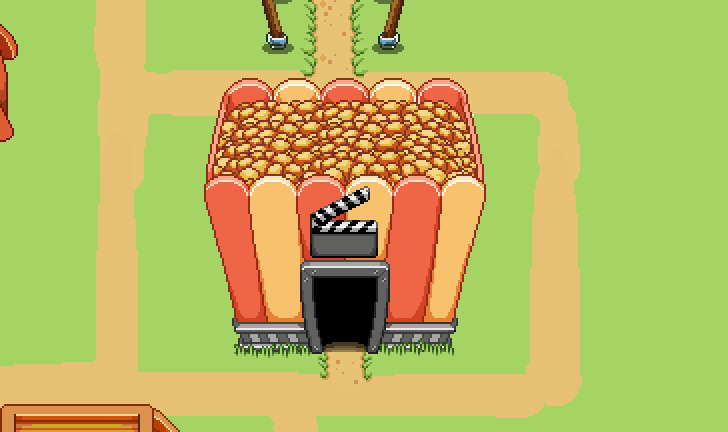 Some grasp the mechanics of Grindea almost immediately, others struggle to land a perfect guard for the whole of the game (so far). To help the latter ones along, and add a challenge to the ones who think they’ve mastered the fine art of the shield, we’re adding the Dojo! 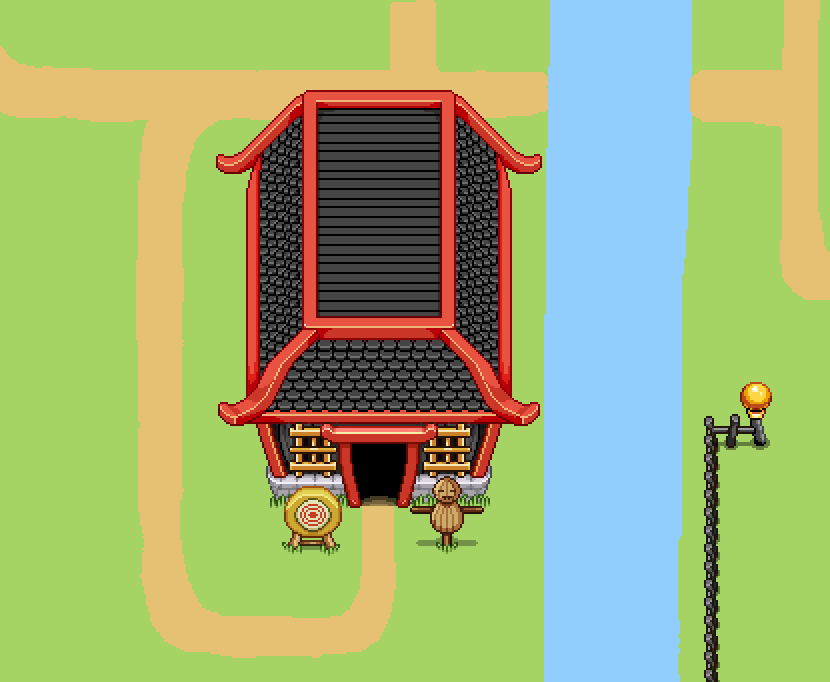 The theme of the left side of the map is more tranquil and nature-y than the rest, as we’ve decided to put most of the decorative spots in this part of the map. One of these is a small garden with a fountain, which serve to bring more people into town (and more people equals more quests)!

Like the other decorative slots, this plot in itself does not affect the mechanics of your arcade run, but the quest(s) you unlock with it might: 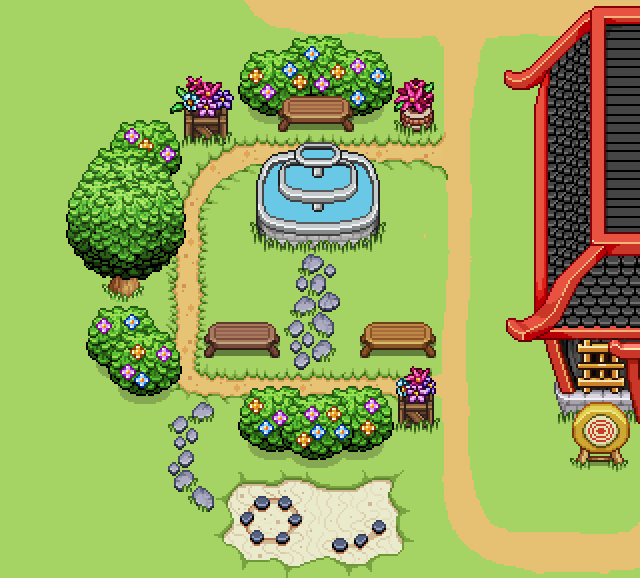 Only two plots left! Drawing close to the end: 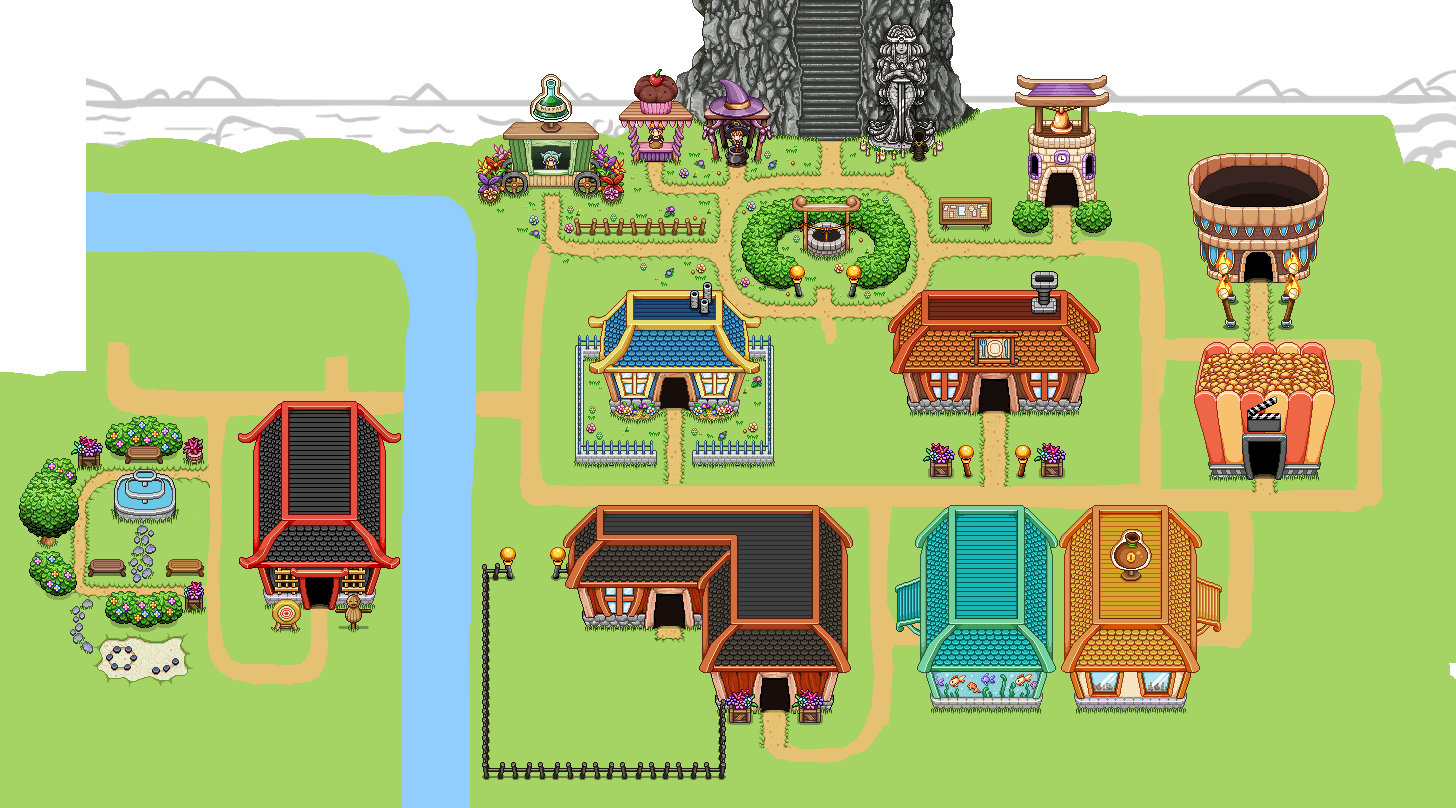 
Keep up the amazing work. It’s great to see the thought process and the decisions you all make, especially the back and forth. Makes one appreciate the care you all are taking to make this game special. You guys really value the player experience in art and mechanics and it’s exciting to see each week unfold. I look forward to more news!


Wow, playing through the game multiple times to test each skill? That’s some very impressive dedication! I admire you guys!! Awesome job so far! I’m really excited for this Arcadia revamp and balance+support skills. :DDD
Blade Furry just keeps looking better and better in my eyes.