One thing we didn’t mention in last weeks posts are what will happen to your old potions. We aren’t so cruel as to simply remove or disable the pots you’ve bought so far – instead they will turn into pet food (which, honestly, is probably what most of you have used them for so far).

As such, we’ll be adding a new shop to the game: Oak’s Pet supplies, found at the farm in Evergrind West! At Oak’s Pet Supplies you’ll be able to buy dishes to feed your pet(s) with, each one boosting a different stat.

At first, we weren’t sure whether we wanted to keep these foods simple, calling them simple things (such as HP Food, Crit Food, etc) and having a very basic appearance (basic pet food cans in different colors and with different icons depending on what stat they boost). However, after some discussion we thought it’d be more fun to use ‘real’ dishes, with fancier names.

Sure, it does not make as much sense that Oak is selling outright food at his farm, but we’ll make that work later on. Maybe that’s why nobody is buying things at Belmont’s café? Oak is serving better stuff for cheaper! It’s food for pets but who cares so long as it’s tasty, right..?

Anyway, without further ado, introducing the dishes that have replaced your old potions:

Light Ceasar Salad – Nothing like a light salad to keep you up on our feet! This dish is replacing the old speed potions, and boost speed when fed to your pet.

Hearty Stew – A thick and warming stew to boost your health! Feed it to your pet and you’ll get a nice HP increase.

Spicy Prawn Soup – A hot soup that will help you land those crits after you feed it to your pet.

Sweet Sundae – Finally, a sweet dessert for your EP needs. Feed your pet this yummy dish and it will be sure to help you keep that EP up and running.

And the title of the shop page! We decided to go for Pet Supplies rather than Pet food since we want to keep our options open: maybe Oak will end up selling other things as well! Such as new taming items…. We’ll see!

Now, time to get back to the Arcadia rework, and we begin with a quick update with some random improvements/additions! First up, I felt the Farm outdoors looked awfully empty, so I added a bunch of hay for your pets to eat, just to make it look a bit more special:

Second, way back we decided that the furniture salesman should have a little sign like all the other shops, so I went back and added it outside the player house:

Speaking of the player house, we also mentioned ages ago that the player house in Arcadia would be the one available in Evergrind as well, rather than the random run-of-the-mill house currently available. Said and done:

Finally, something not-Arcadia related! We’re considering adding a painting of the player’s mother in the lab, where you dad hangs out with the artifacts. Just a little reminder of why you’re collecting them in the first place~

Now, finally time to move indoors and start doing some cool house interiors (it’s been a while now)! Today, we’re starting off with the Clock Tower, featuring the world’s longest GIF. I should have just recorded a video of this whole thing but I’ve been doing GIFs so much now that I just completely forgot I also have a YouTube channel for these things. Oh well!

This place was actually quite a bit of a struggle! I’m working on my rendering technique for those pesky wall textures, trying to fins a nice balance between too plain and too much detail/colors.

The main part of this room is the bell, which will allow you to change the time of day, and the window which indicates what time of day it is. The window will be animated by Fred at some point, where the image will turn from night to day. At that point the background might look completely different depending on what’s easier to animate for him, but for now I just put a piece of the Arcadia background there instead of keeping it empty. 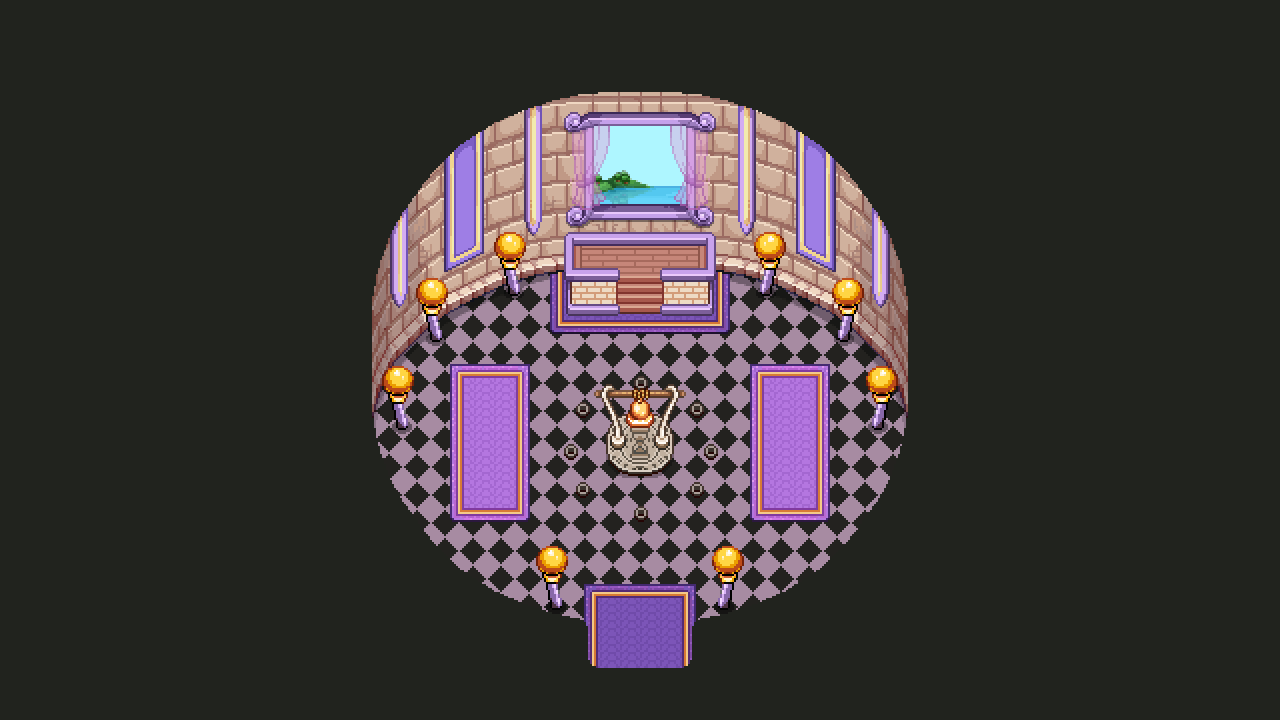 Next up we continue the Arcadia rework, today starring the the farm interior! This place will have the same look and feel as the farm in Evergrind West, only with updated graphics and more stuff.

We’re actually considering replacing the old farm interior in Story Mode with this one, but we haven’t fully decided yet. On one hand it looks a lot better graphics wise, on the other it’s kind of nice to have the unlock in Arcadia be a bit more special. On the third hand (…let’s not get into anatomy…) many players will probably never play Arcade Mode or get to the point where they unlock the Farm, so it means a lot of people won’t get to see the better version, while most people likely will visit the farm in Story Mode at some point.

And the finished version, missing Oak, of course: 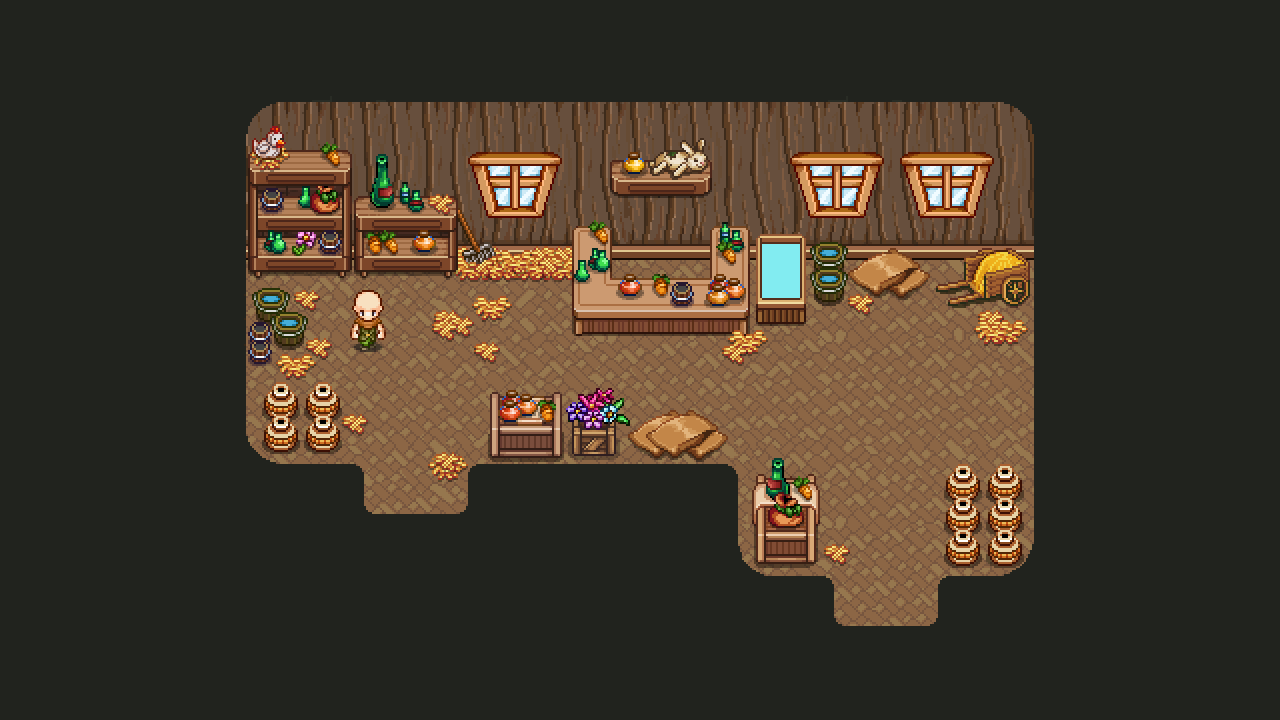 And while I continue doing Arcadia stuff, Fred returns to the desert! Over the weeks I’ve made quite a bunch of portraits for people in the desert, and now it’s time for Fred to start making their sprites~

Here’s a bunch of the inhabitants you’ll be able to talk to in the upcoming desert town, also featuring their WIPs and various stages before the final versions were picked (the final selection are the one in the circle on top): 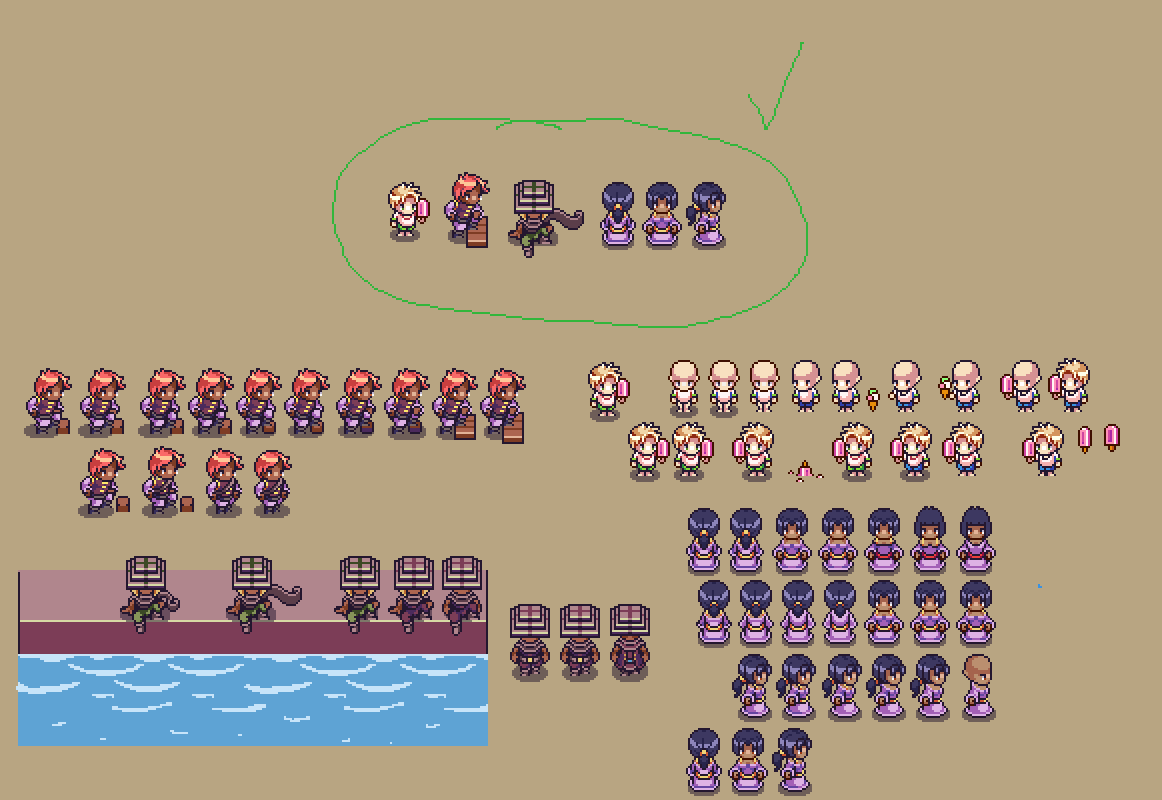 There’s also a bunch of fishes being made for the Aquarium that will be available in the Arcadia Rework! So exciting, look how cute they are:


I shall catch the glorious fishstick fish and it shall be a delicious fish. :D

I really like the new player house and pet food. Feed all the ice cream to my pets~


Its such a nice thing to see the game coming along together little by little. Every detail in it is well thought and amazingly well executed. You guys are doing such a great job and every one of you is a great professional on your own areas.


hi, i have suggestion about armor.
how about a set of armor, there is helmet, body, shoes and another accesoris. when character use this complete armor then have special effect.

Just wanted to say I’ve put around 100 hours into this game and love it (100% story mode a few times, except the archery mini-game that I’m pretty sure is impossible and I’ve given up on). Really fun game, looking forward to the rest of the story! Arcade is a way too difficult for me so not really waiting on those updates unfortunately.

I do have ONE qualm that I hope you’ll consider though. Pets feel almost useless with how slow they level up. It would honestly take me several days of grinding to make one useful. Now, I know that’s the name of the game, but really the game isn’t too bad in any other aspect. Right now, I get like 3 levels on a pet and it becomes very tedious to get more levels. I imagine you’re a bit afraid to break your game by letting them be too powerful, but I think letting get up to level 5-10 more easily would be a change for the better.

All the best and looking forward to more.


Great choice on going with fancy food plates and names!
It may have something to do with not having ate anything today, but those plates made me hungry.