This week we mainly continue our work on the Arcadia remake, but we also took some time to bring a bunch of printouts of the desert area to our favorite fast food place for a little chat! Our goal was to discuss more in detail exactly what’s going to happen as you journey through the desert towards the harbour town, and what side quests we aim to include as we add this to the game. 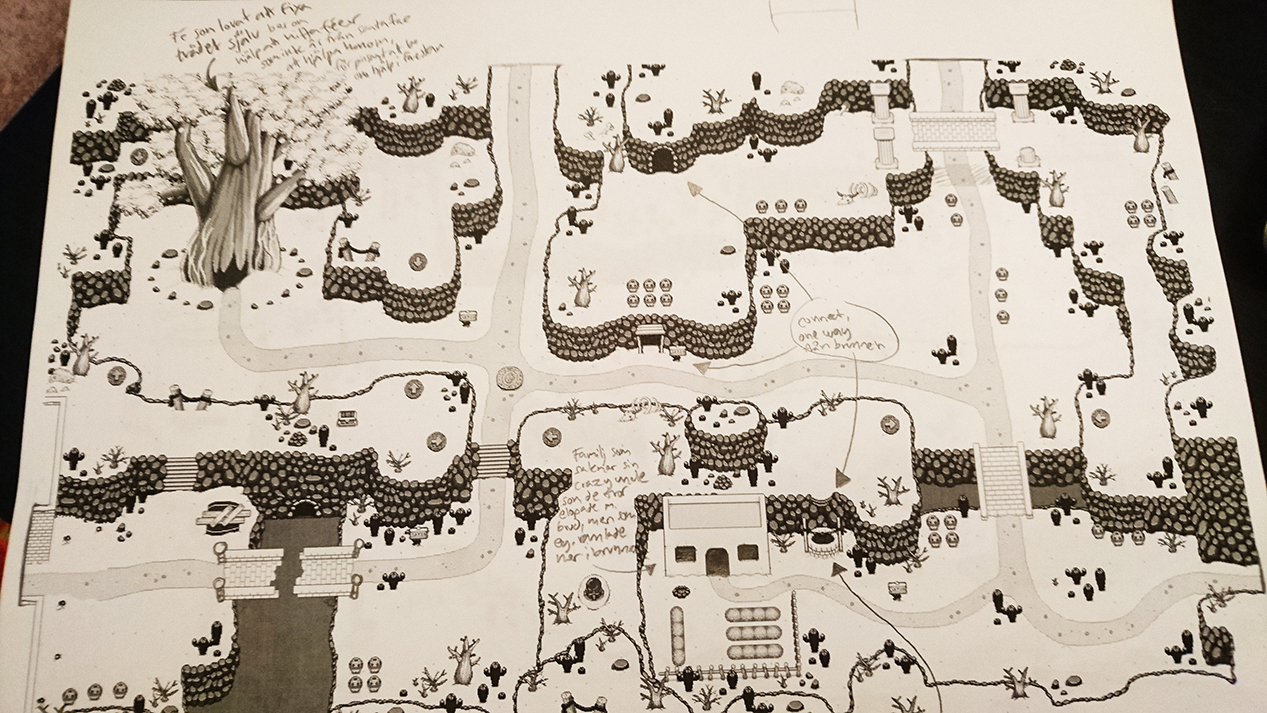 We took a ton of notes on each of the maps, filling them with sentences about what will happen, what things will look like, what caves will connect and what will be in them, etc. After we were done, the desert had gone from a pretty basic set of maps to one of the most well thought out areas so far, at least in my opinion!

We aim to include three bigger side quests when we add it to frontline/stable (not including quests we might come put with for the harbour town), but like most areas, we have more ideas for other quests to include at a later date when it’s time for an overall polish of the entire game. While it won’t have a big side area like the Tai Ming’s phase shift section, the main quest here will bring back a lot of old friends to the plot, and have you travel outside the desert as well.

With all this new information, there’s a ton of new maps (cave interiors, specifically) for me to do, and a few new enemy and mini-boss animations for Fred to deal with as well! It’s all gonna be a lot of fun, and we hope you’ll be as excited to finally explore this area as we are making it.

However, before we start focusing for real on the desert, there’s still something left to do: the Arcadia rework (as mentioned), including the Tai Ming and Mount Bloom floors which currently aren’t in the game. So while we’ve made sure to plan ahead for this, it’ll be a little while before we actually continue working on the desert stuff.

And the next Arcade Mode interior…. is the Inn! Or the tavern! Whatever you wish to call it. True, it does not have beds, but who’s to say there isn’t a hidden door somewhere that leads upstairs?

In either case, this is sort of an upgraded version of the old Tavern in Arcadia. Doesn’t look exactly the same, but I went for the same sort of feel and the overall layout. When everything is implemented this place will probably have more visitors than it currently does, more inhabitants looking to hand out quests!

Here’s the WIP video, using a lot of old housing items for this one: 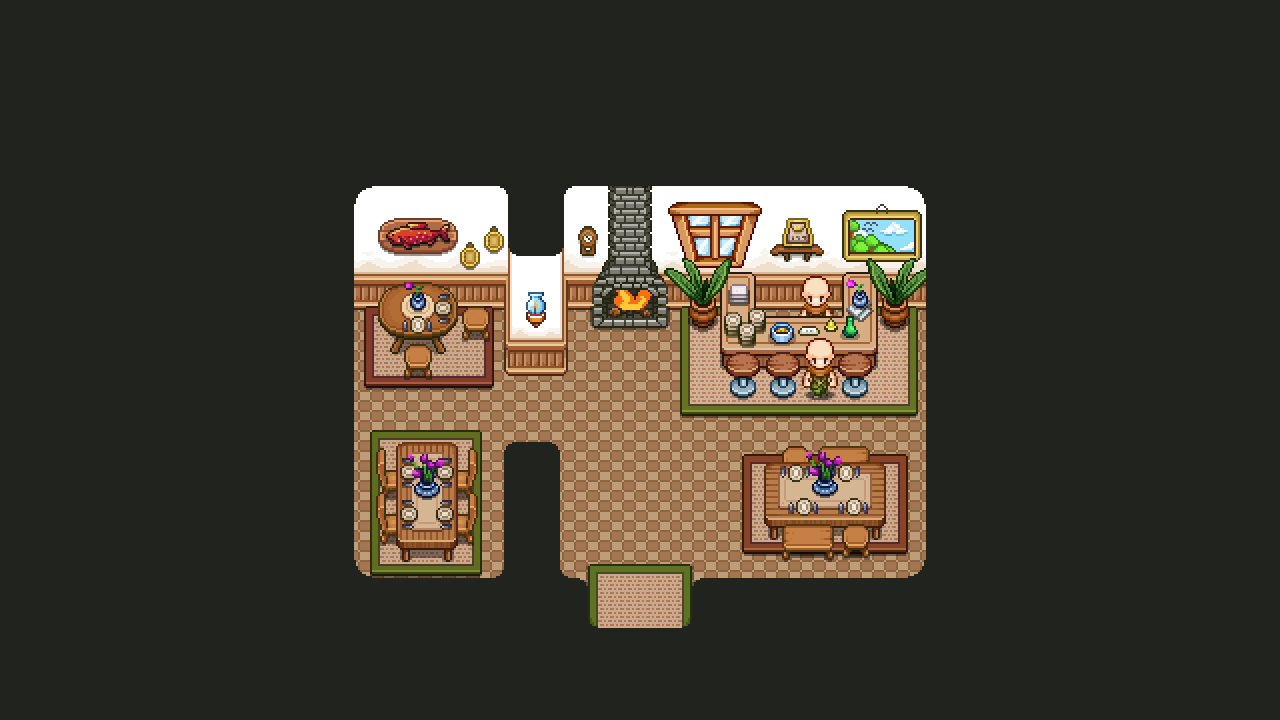 Next up, the arena!! Another interior that gets and upgrade, where we aren’t completely decided on whether this new upgraded version will replace the old one in Story Mode.

Like with the farm, I kind of went for the same layout and overall design, though in the original version there are statues of fighters which I opted out of in this version: I just didn’t feel it worked very well with this rather smaller and more compact version of the layout.

Instead, my hope is to have a few spectators chat in the reception area, maybe swooning at the champions (you guys) who are about to enter the fray! 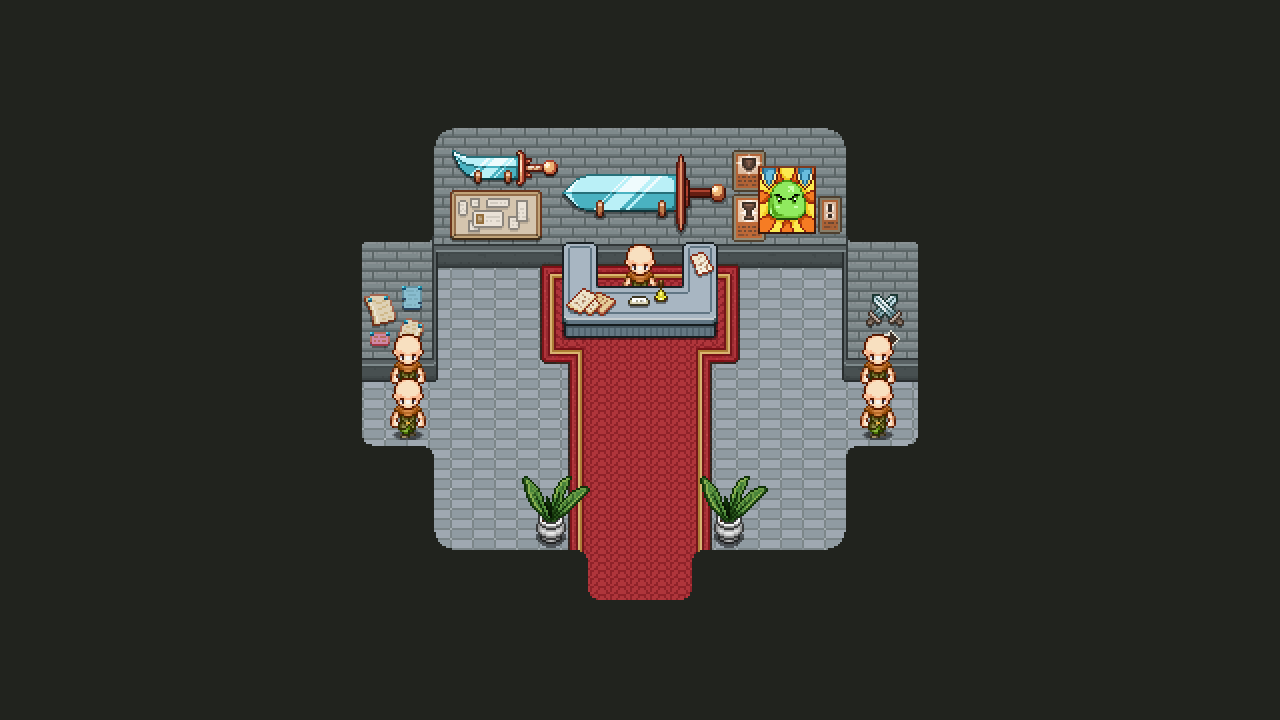 And now, a completely new building, not previously available in any form: the Bank! How exciting! …Maybe.

So for this place we wanted the look of a waiting room, with a kind of office-y feel to it. People requesting loans and whatnot will be waiting for their turn, while the player can just waltz up to one of the desks and request an exchange of gold to essence (or the other way around)!

Aside from the desk where the bank workers will be, there’s a (heavily guarded!) vault, and a water cooler, cause waiting times for non-players can be quite extreme… 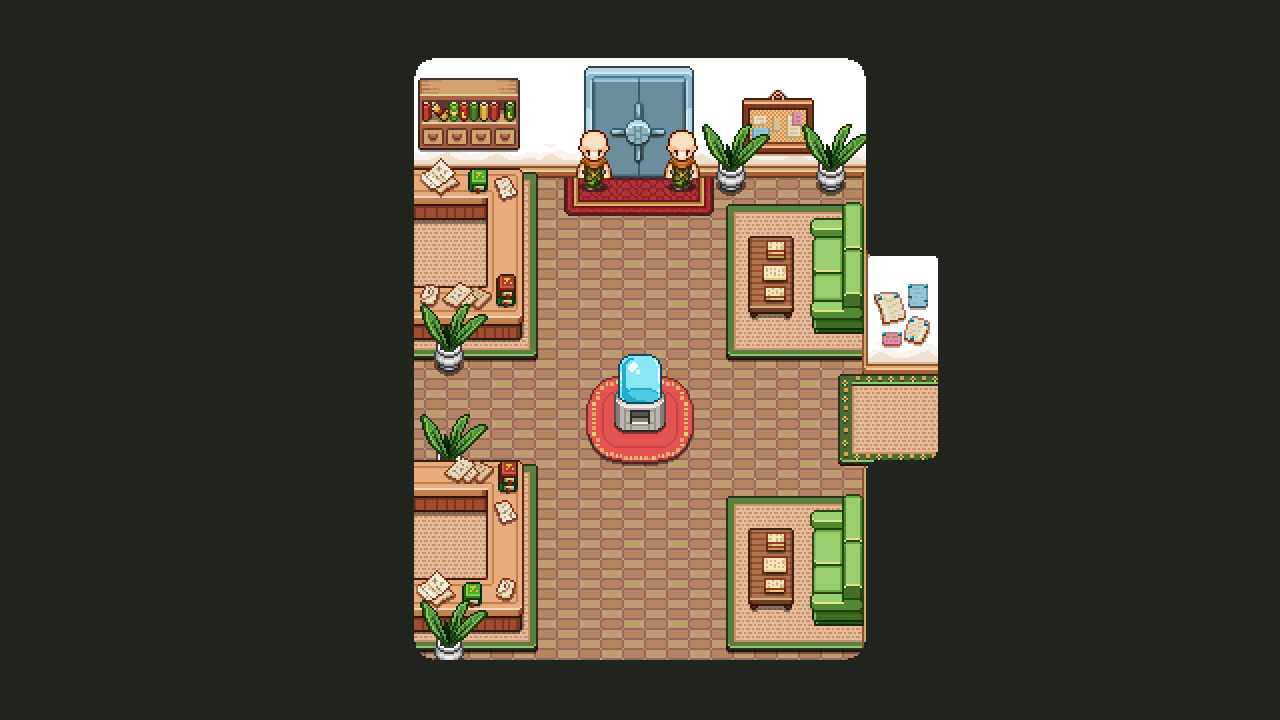 And finally, a bunch of new fishes for the Aquarium, to end this week!

After some discussion we’ve decided to make all of the fishes available in the Aquarium, which means each of them needs to be animated. While Fred has made a bunch already, there’s still a ton left to do…

..and as such, here’s the second fish batch, ready to be put into an aquarium near you:

Playing a new character through story, got my bow, went to upgrade it and was spamming start/clicks to talk to the npc faster, it for some reason gave me the second bow upgrade right away (the winter one). It actually put my gold into the negative too so it did charge me for it on top of the composite bow.

I think it was still upgrading when I talked to NPC again because I was spamming. Also if it mattered, I left the area and came back later before upgrading because I didn’t have enough gold initially.

P.S : Thank you for adding Blink to the game. So much fun with it, especially with Titan’s Throw.