We’re back! Hope you guys have had a great holiday, a merry christmas and a happy new year! Now it’s 2018, and as we continue working on and implementing Arcadia rework, it’s only natural that our weekly meeting has a lot to do with establishing the smaller details of how everything will work!

Early Gold Quests
In order to quickly get your first building(s) up and running, we’ll add a couple early quests with gold rewards to speed things up and get your into the whole building thing as soon as possible! Some will probably be reused from old Arcadia, while a couple will be brand new.

Balancing Gold Rewards for Slow Builds
How much gold you get per run/room will be balanced is a tough one, because we don’t solely want it to depend on how quickly you clear rooms (even if they will play into it too, of course). Using only speed as an indicator would mean that certain builds, such as anything involving Insect Swarm for instance, would get a lot less gold vs the builds with faster clear times. To counter this, we’ll award extra gold depending on how long your active time on a run is, meaning if you play for a long while with a slower build, you’ll still get the proper gold reward that quicker builds get.

Remember how I mentioned a build time that would count either IRL time or Arcade run time (or a mix of the two where time passes faster if you play Arcade Mode)? After some discussions, our current stance is that we’ll probably skip build times altogether.

This was a kind of difficult decision because we wanted to give players another incentive to play more Arcade Mode (play the game to unlock your building/unlock it faster)! However, you’ve already played Arcade Mode to gain the gold used to unlock the building, so it felt a little unfair that now you have to play the game more before it actually spawns, even though you already paid for it. Instead, we’ll probably use a fade to black effect with some building sounds before you return in front of your fully built property.

We’re still not 100% sure about this, and each of us actually have our own preferred version with the fade to black being the compromise. What would you guys prefer? Would build time be a nice or annoying thing?

A couple of Treats & Curses
We’ve only just begun planning for these, but here are the ones we’ve come up with so far:

Treat – No Elites spawn at all
Treat – More HP from HP orbs
Treat – You start your run with a Time Crystal that rewinds time to when you first entered the floor if you should die. Meaning you get a chance to play through the floor again and fix your mistakes!
Treat – Increased chance of getting treasure rooms

Keep sharing your best ideas and we’ll see where we end up with all of these!

And now, time for more interface design, this time featuring the Arena! As a reminder, here’s what it looks like in Story Mode: 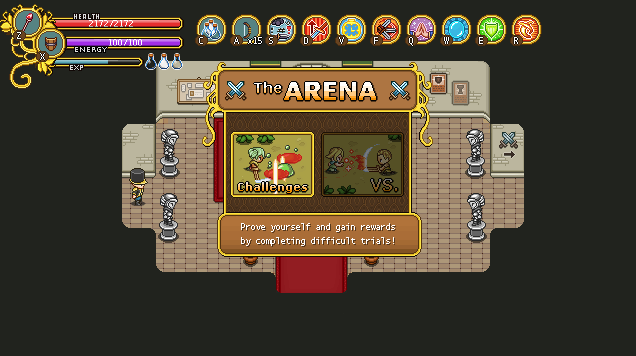 There are two categories, Challenges and VS. Challenges won’t be available in Arcade Mode, but there will be something else: 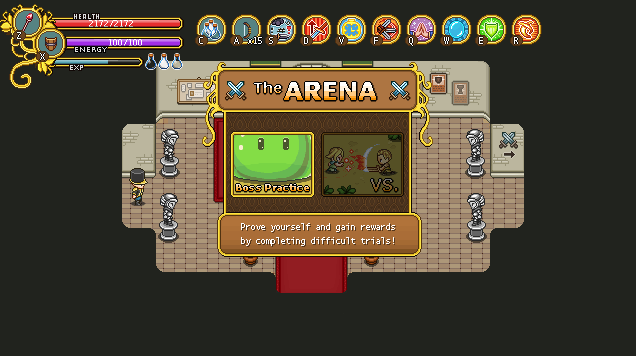 Boss practice! For those of you who have troubles with bosses, we know it’s really difficult and annoying to get chances of practicing against them as you have to survive a whole lot of regular enemies first. To give players a chance to polish their skill against these more difficult bad guys (as well as a way of learning their patterns), the Arcadia Arena will let you pick and choose among the bosses you’ve reached so far (no skipping ahead). When designing this interface, I presented two options: one featuring three bosses per page (with a scrollbar), and their name next to them: 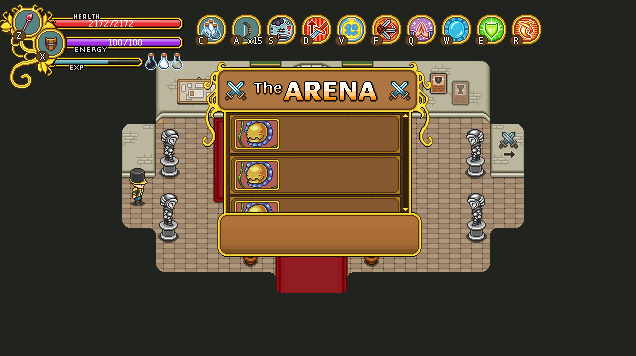 ..and another, featuring just the boss images, with their title and description shown only in the text box instead: 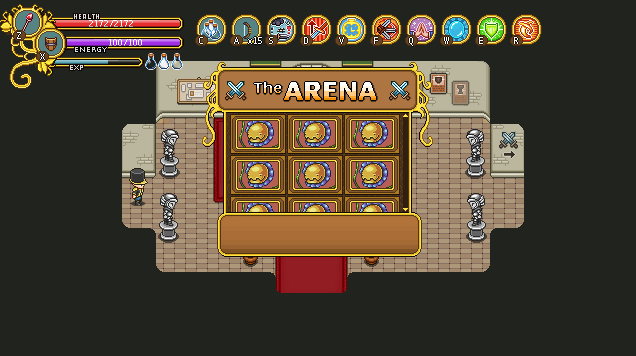 It’s likely we’ll go for this second version as it has room for a lot more enemies and the text box won’t be used much anyway!

Once you’ve selected the boss you want to practice against, you’ll be presented with three character slots, featuring the last three characters who reached that specific boss, with their equipped weapon and main skill of choice shown beneath them: 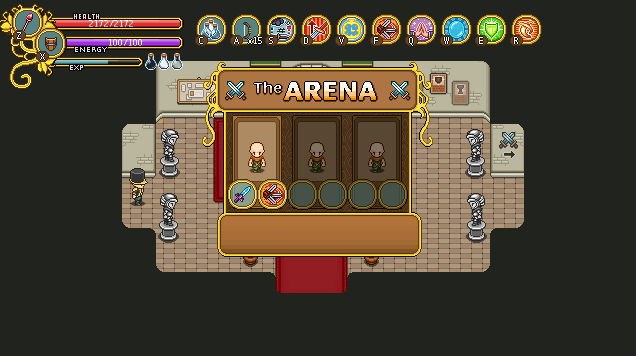 This is so that you’ll have approximately the right level and equipment for the boss fight (as your current Arcadia character is level 0 with no gear what so ever)! It gives an accurate representation of the fight, as it reflects how you got there last time, and allows you to try out the fight with possibly different builds (if you change playstyle between runs).

Once you’ve selected which of your old characters you want to rebattle the boss as, you’ll be transported directly to the boss room for another go at the battle! Currently, none of these will cost gold or any other value, so you can practice as much as you like :)

The next interface up on the design table belongs to the Bank and involves trading essence for gold, and gold for essence! For this interface we’ll use the Quantum Lumber interface from Housing as a base: 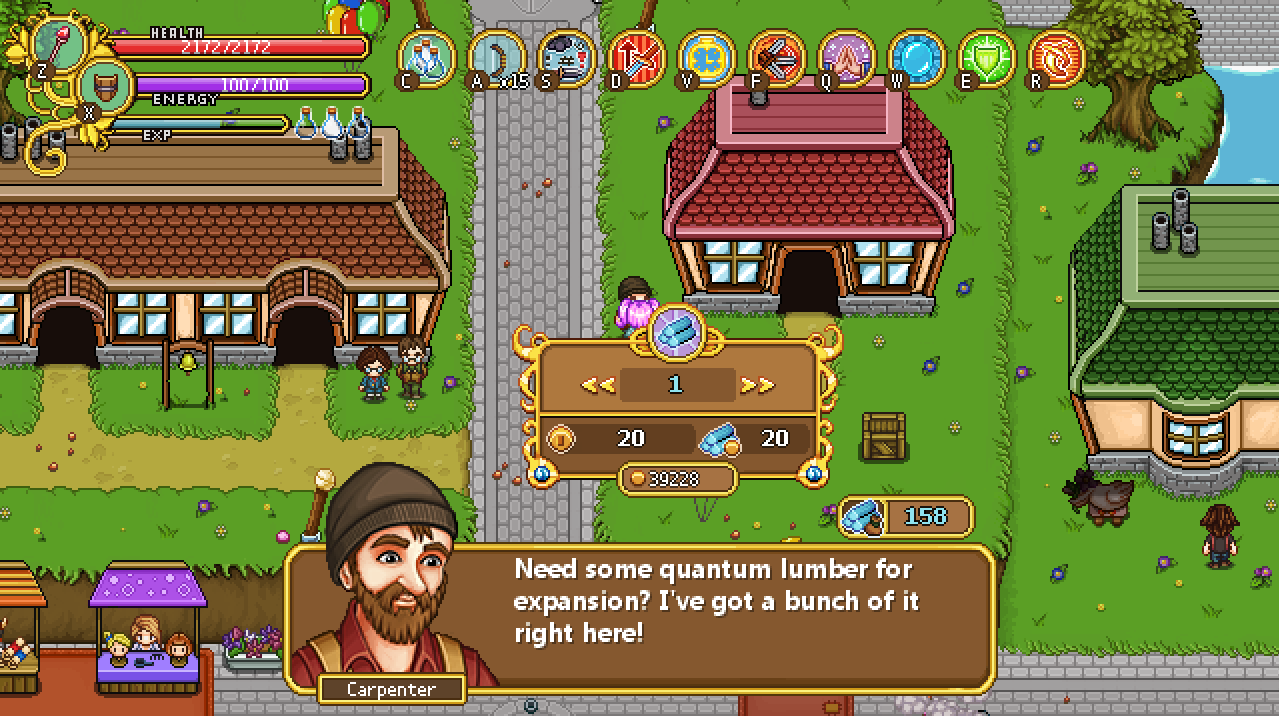 The main difference between the Lumber interface and the Bank’s interface is that instead of Lumber we’ll deal with Essence (obviously), and that you’ll be able to either buy Essence by handing in gold, or sell Essence and get gold back for it.

From the beginning we thought we’d deal with both in the same interface (calling it exchange instead), where you’d scroll right to get more Essence and less gold, and scroll left to get more Gold but less Essence (with a symbol for the respective currency on either side). However, we felt it’s probably easier to understand if we just call it Buy/Sell Essence and keep them separated.

Here’s our first try at a modified version of the Lumber interface: 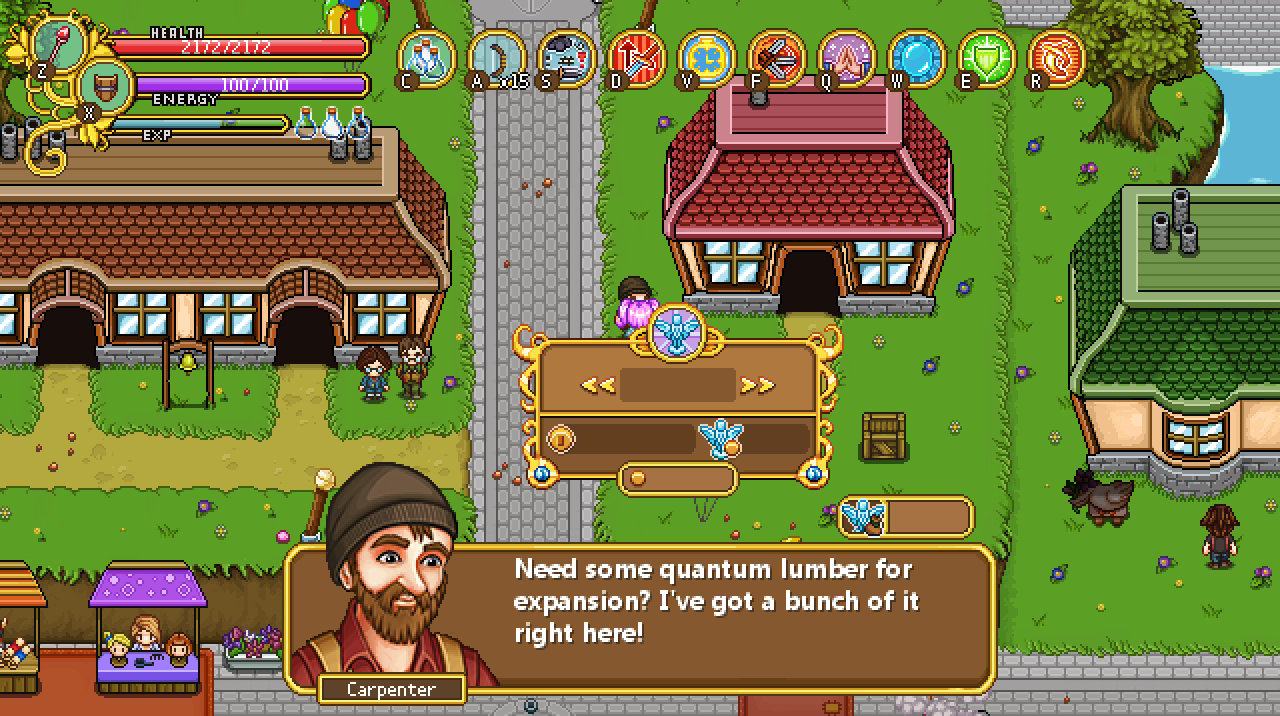 Here, the Lumbers have each been replaced by an Essence statue. The top box will contain a number indicating how many Essence you want to buy (or sell), the number next to the big coin will let you know how much that will cost you (or how much you’ll get back for selling your precious Essence), and the number next to the Essence-with-a-coin indicates the current exchange rate (which don’t change the way things are designed now, but we thought it might be interesting to know).

The small gold coin is next to your current gold total, and the Essence-with-a-bag shows how many Essence you currently own. Pretty much like it is in the Lumber interface, in other words! 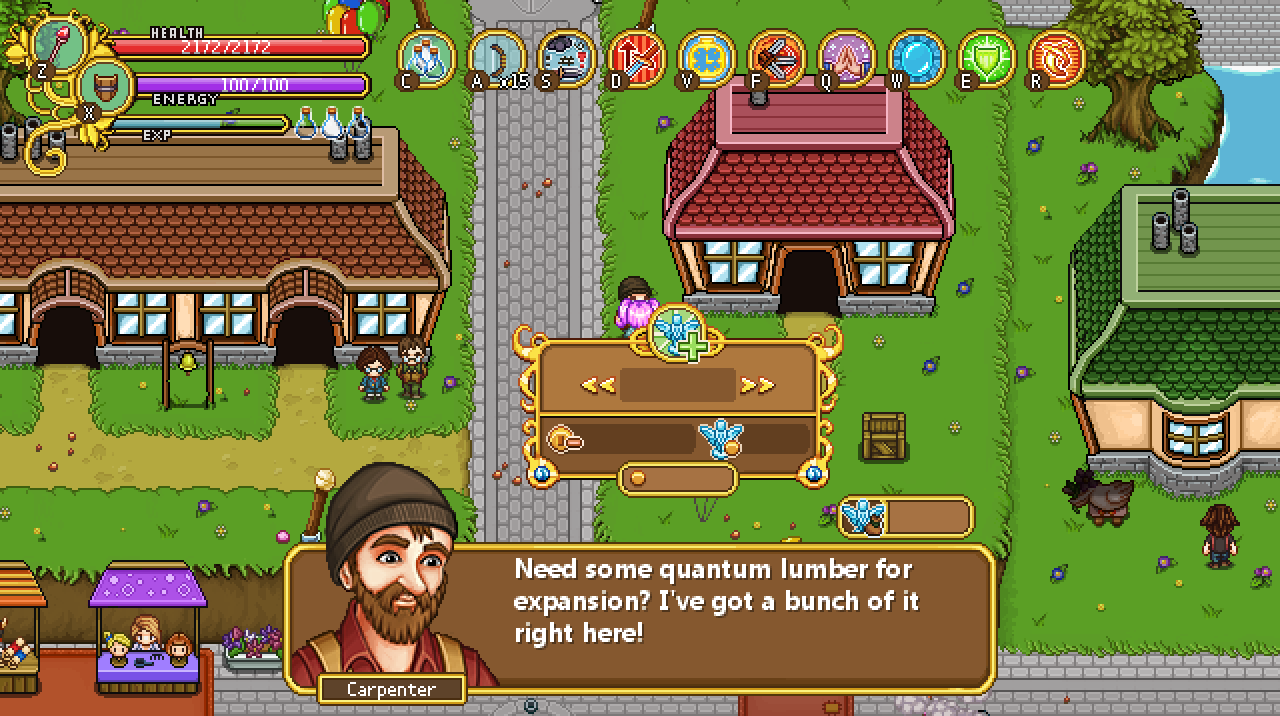 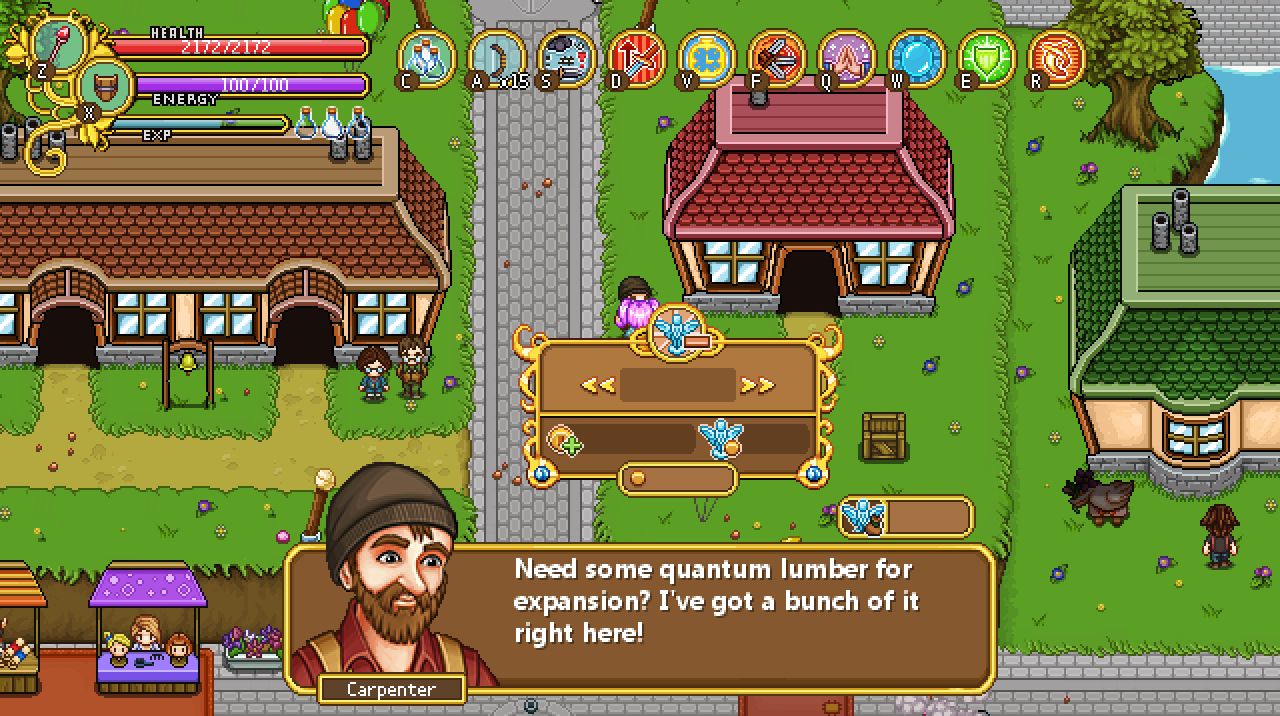 Finally, the shop menu (where you select Buy/Sell or Talk) needed two new buttons for this, so here they are as well:

Remember Trunk, the sidekick who will fill the role of (a more cheerful and optimistic) Bag in Arcade Mode? In order to communicate with you properly, he of course needs to have his own portrait:

The final version, slightly cut off to fit the text box:

Finally, there’s a bunch of NPCs made by Fred! Some of these have portraits that have been showed before, but the two on the right are brand new archaeologists that will be inspecting the old ruins and skeletons found in the desert!


Fade to black with construction sounds is more ideal imo


In my opinion fading to black is a somewhat poor stylistic device.

I would prefer the building-time solution. The combination of being able to “spend” real-time or “ingame-time” (which I would measure in floors instead of actually spent time) is great. On the other hand I get that you don’t want the player to “pay twice”.

So how about after unlocking the building the player needs to do just *one* run to actually spawn the building. This may however lead to players just starting a run and instantly aborting it so I would probably prefer to having to reach a certain floor (rather easy maybe 4th or 5th) and just have a construction site with building sounds until then. One way to include this in an immersive way is eg. that you have to “collect” one or more builders who are waiting on random floors (similar to existing quests).


I would prefer not to have a build time with irl or game hours. That just brings to mind mobile games and stuff, which is super annoying. However I would like there to be something else, maybe you gotta beat the first (or first two) floors? Not sure tbh, but I very much dislike the fade to black then it’s there type of thing.