Another week and more desert progress! This week it’s time to begin making those houses that will appear in the desert town. First up is the church, where a certain follower of Grindea will appear:

In the beginning we thought it’d be fun to have a sword at the top of the building, kind of emulating the way churches here in the west have crosses up there, but we’ll probably replace this to something more associated with Grindea later on, such as a bigger version of Essence or something along those lines. For now though, here’s what it looks like: 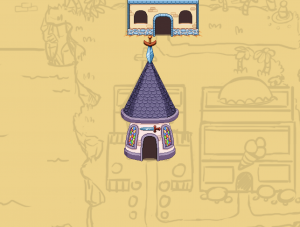 Next building is the Ice Cream parlor! A place where you’ll be able to get a yummy snack. In the final image below, the window got mirrored so the light on it comes in opposite directions. I will fix this in the final version and possibly put silhouettes of ice creams through the glass as well. 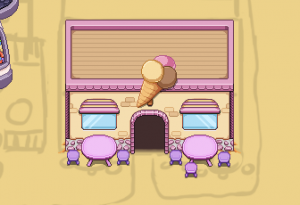 And the next part of town I’ll focus on is the beach! A place where people go to relax and enjoy the pleasant weather around this area. Maybe play some beach volleyball or take a swim in the water:

The water around the area looks a little lacking right now, but I plan on asking Fred to make some animations for waves coming onto the shoreline, ans well as the usual water decorations: 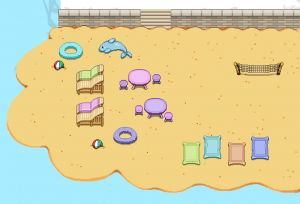 Now, another portrait! Continuing on with the family of gardeners, it’s time to make a portrait of the father, the guy with the pot of unknown liquid:

As the Arcadia rework is well on its way, Fred has moved on to make a couple of things needed for it, in this case a sprite of Candy that isn’t hidden behind her giant cauldron, and a cute little familiar we decided to add that tags along with her:

How cute! Wouldn’t you like to have one of those familiars of your own? ….Well, maybe you will. Maybe you will.


If Pumpkin Familiars don’t become tamable pets I will cry myself to sleep every night forever. Q_Q