It’s been a while since we had a post with design decisions and the main reason for that is simply that we haven’t had much to talk about! I’ve been busy making stuff for the desert town while Teddy has been implementing all of the stuff me and Fred made for Arcadia. Recently we sat down to talk about two things though, and the subjects of those talks can be found in the title…

First up the Arcadia version of the Farm. Our first idea was that this place would be a place where you could get taming items and capture the same enemies that you can currently catch in Story Mode, which will then start living in the pasture outside the farm (or inside town if you decide to leave the gate open).

After some discussion we thought this would be a little underwhelming though, seeing as you don’t bring along your pets here as you do in story mode. So instead, our goal is that you’ll be able to tame not only all of the enemies, but also that you’ll be able to capture several of the same species, and decide yourself how many of each or which of the animals you want to display in the farm. To do this we’ll add an interface showing how many of each animal you currently own and how many are currently outside in the pasture.

To catch these animals you’ll use bait in the same way as you do in Story Mode, but you’ll be able to buy more from Oak in order to capture more of the same kind. Chickens will be the main exception to this. They will instead be acquired through eggs that you can purchase from Chika, who will also be present in the Arcadian farm. The eggs can be placed in nests inside the farm building, and take a set amount of ingame time before they hatch.

At the moment you’ll only be able to capture the animals available as pets in Story Mode, but our goal is to be able to tame and keep each type of enemy in the pasture.

Meanwhile, Haddock’s role in Story Mode has been quite underwhelming outside of him giving you a fishing rod early on. To remedy this, we’re having him give you quests, where the rewards are aquariums for your housing house. Each aquarium has enough space for a set number of fishes (which you select yourself from the ones you keep in your inventory). There will be a variety of sizes available and each come with different styles of inside decoration. As for the quests, they will be centered around fishing and presenting Haddock with different fishes.

Now, time for some mixed Arcadia fixes! I know we’re not completely done with the Desert Town, but I needed to go back to Arcadia to fix these things so Teddy can continue implementing ’em. First up, we decided to change the name of: 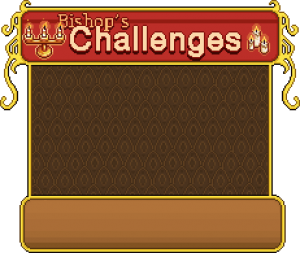 ..to the slightly more ominous: 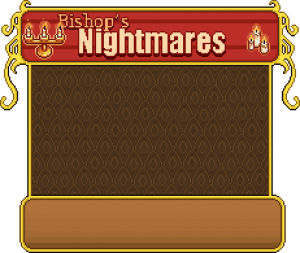 Our reasoning here was that a ‘challenge’ sounds like something it’s possible to overcome, while the idea of these insane runs is more a case of seeing how far you can get before the inevitable end.

Speaking of insane runs, the boss practice in the Arena needed a new interface where you get a ranking ranging from S to D on your encounter with said boss. Points will be deduced if you take hits or take very long to finish: 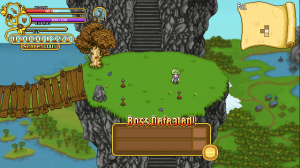 Next up, here’s a little reminder of what Master Ji’s dojo looked like when I was done with it: 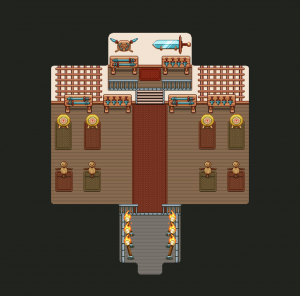 …and the reason I’m showing it is so you can compare it to this smaller version: 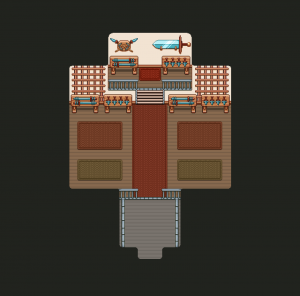 We decided to make it smaller to make better room for the camera and just limit the space in general: there’s really no reason to run around to much when your main goal is to shield the enemies!

Next, another reminder, this time of the farm: 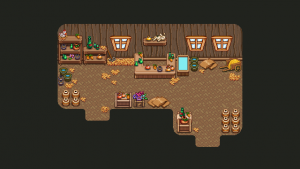 As mentioned, you’ll be able to hatch chickens from (enormous) eggs, so I went ahead and made the nests where these will be placed:

Investigating an egg will give you a hint of how much time remains before the egg is ready to hatch (though in rather vague terms ranging from ‘not in a while’ to ‘soon’, hah! The actual amount of time it’ll take will be decided on as we continue testing. 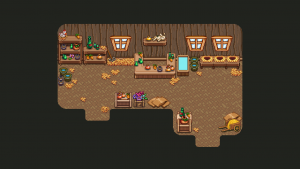 Next up, some small interface things, namely a button for selecting shield training and ‘shop title’ windows for when you talk to Master Ji, Muffin or Candy respectively:

We’re not completely done with Arcadia yet, and with our new ideas for the farm, it’s time for me to put together some basic interfaces for the new features.

First, an interface for deciding how many animals of each kind you want roaming around the pasture/full map:

The numbers are placeholder for now but are supposed to be how many animals are currently outside vs how many you have in total. The % will be a / in the final version, I just quickly used the % here to make sure there was enough room for everything: 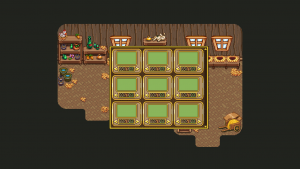 In the interface, you’ll see the taming item on the left, and what enemy it tames to the right: 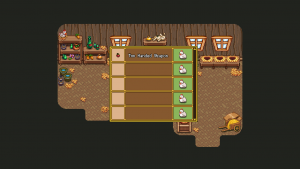 Of course, in order to get to this portion of the menu, a button is needed. We considered using the regular Buy button, but since this doesn’t work the same way the regular shop interface does, we made a new one for buying Taming Items:

Meanwhile, the eggs Chika sells will be available in a regular shop, which means it needs a shop title box, as seen below:

Next we have another portrait! This is the second armwrestler, the opponent of the one shown last week. A quick reminder of the sprite version:

The one is actually a young lady, but not much more is known about her for now. Most of these Saloon NPCs will probably mainly be background characters that won’t get much of a story of their own, but never say never! It’s always good to have a number of spare characters for upcoming quest ideas.

Fred continues to take requests on animations given by Teddy as he fleshes out the revamped Arcade Mode. Most recently, we needed a receptionist for the Aquarium which will house your collected fishes. Since we have but one master of the fishing rod, we decided to put him on duty here as well, and in doing so give him an animation from the side:

Next, a little something to help enhance Master Ji’s shield training! This shield will appear whole or break, depending on whether you win or lose his current challenge:

Here’s a little sneak peek of what it currently looks like, though we’ll likely change a few details:

As for the pet business, we thought there should be a slightly bigger fanfare to capturing the pets now that they very clearly get sent down to Arcadia rather than go with you (perhaps we should add this effect to story mode as pets get sent to the farm as well):

Finally, another inhabitant of the desert town, a guy who might just have spent a little too long in the sun (or perhaps should have removed his sunglasses first):


Dang. Was hoping the Arcade Mode was fully done. XD I cannot wait for the story mode. I’ve been grinding with my same character. He’s level 28 XD