Hey guys! It’s a new week and new adventures. First, though, let’s take a look at some of those last minute fixes for Arcadia.

Some of you might have noticed some very wonky backgrounds for some of the Mt Bloom challenges! This is due to a miscommunication between me and Teddy: he had made a couple of backgrounds by copying and pasting random pieces of old backgrounds into something that fit with the phase challenges he designed. However, he forgot to tell me about these and so when the patch initially launched, it launched with the WIP bakgrounds – oops!

While this has been fixed, though it hasn’t been updated in the game yet. For now, enjoy the rather wonky WIP versions, haha! 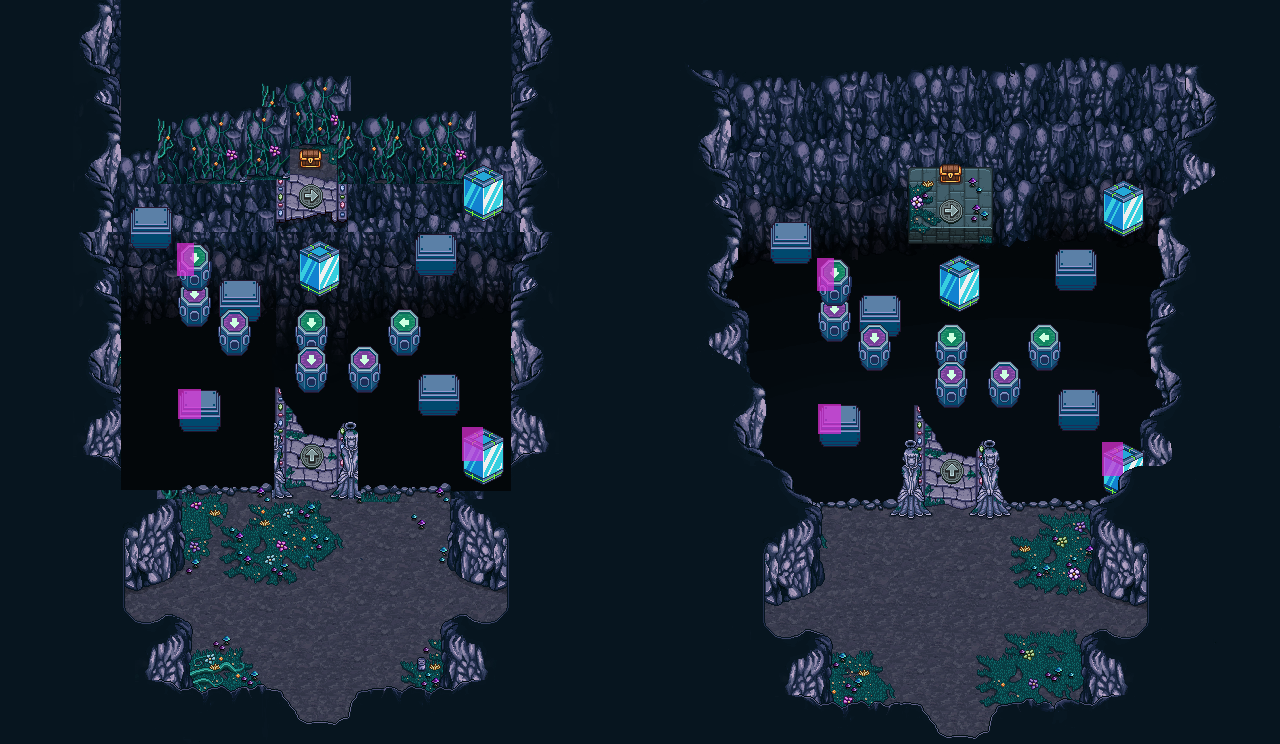 Another thing that will be added soon-ish are the achievements for the two new floors. As always, there will be one achievement for reaching the floors, respectively, as well as one for clearing all the available challenges and for getting S-rank on both floors of the same theme.

Other than that, it’s more bug fixing and fixes on the menu for Teddy while me and Fred will continue on to the desert! Fun times :)

And the next step on the desert menu for me is of course to repeat the whole process of the previous cave map and create aaaall the rest of them in their most basic form to begin with: meaning walls, floors and any stairs/dropdowns/doorways: 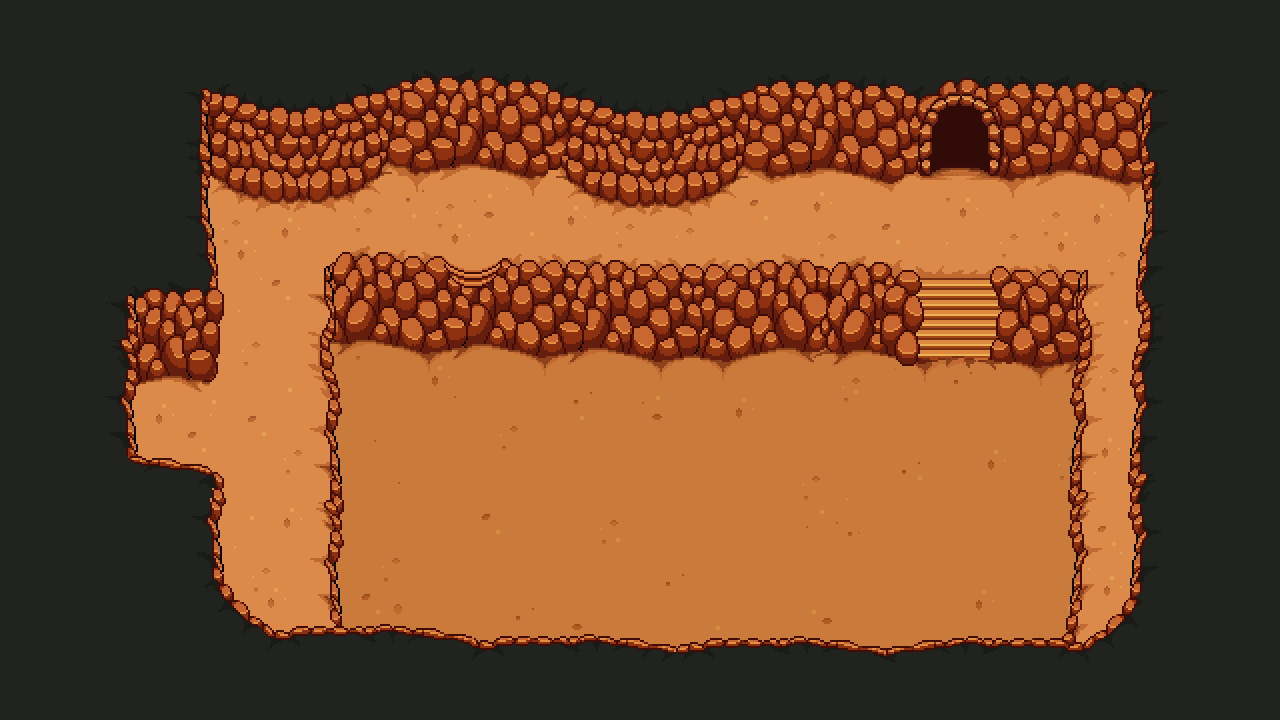 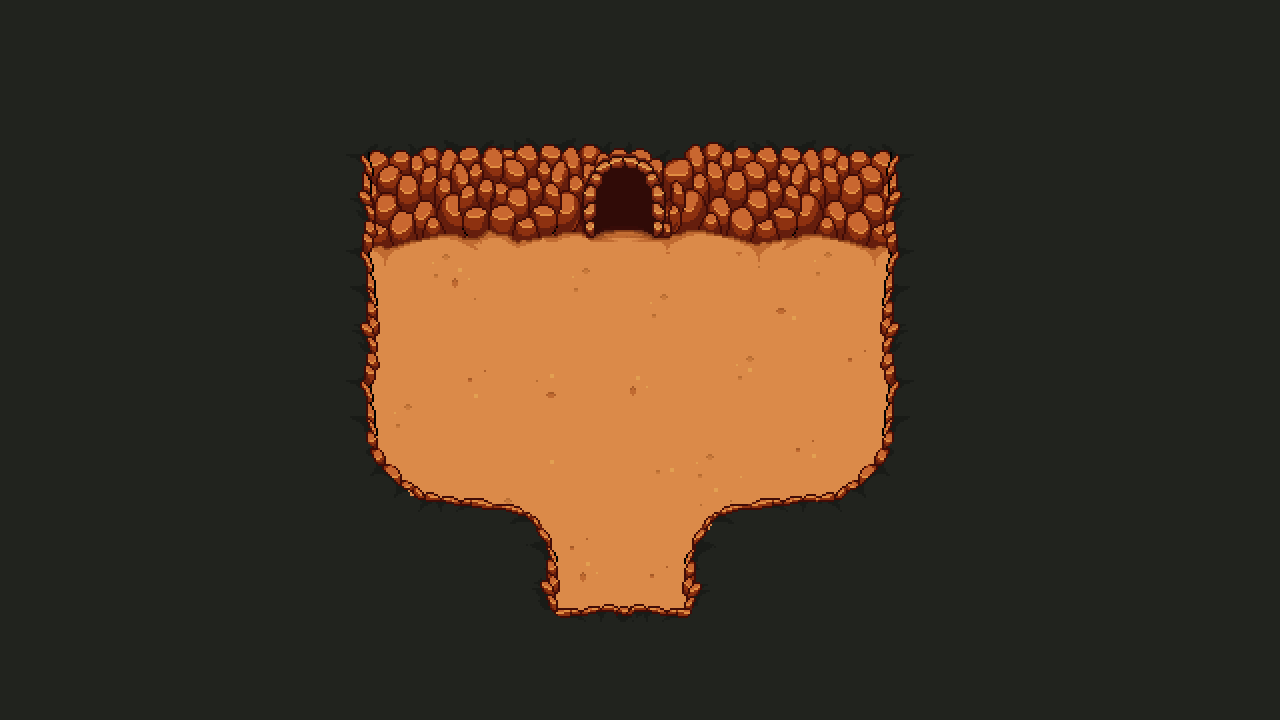 The room above will be used twice for two different caves, and you’ll be able to tell them apart by the decorations.

Next, this big boss room will be cut off at the top… 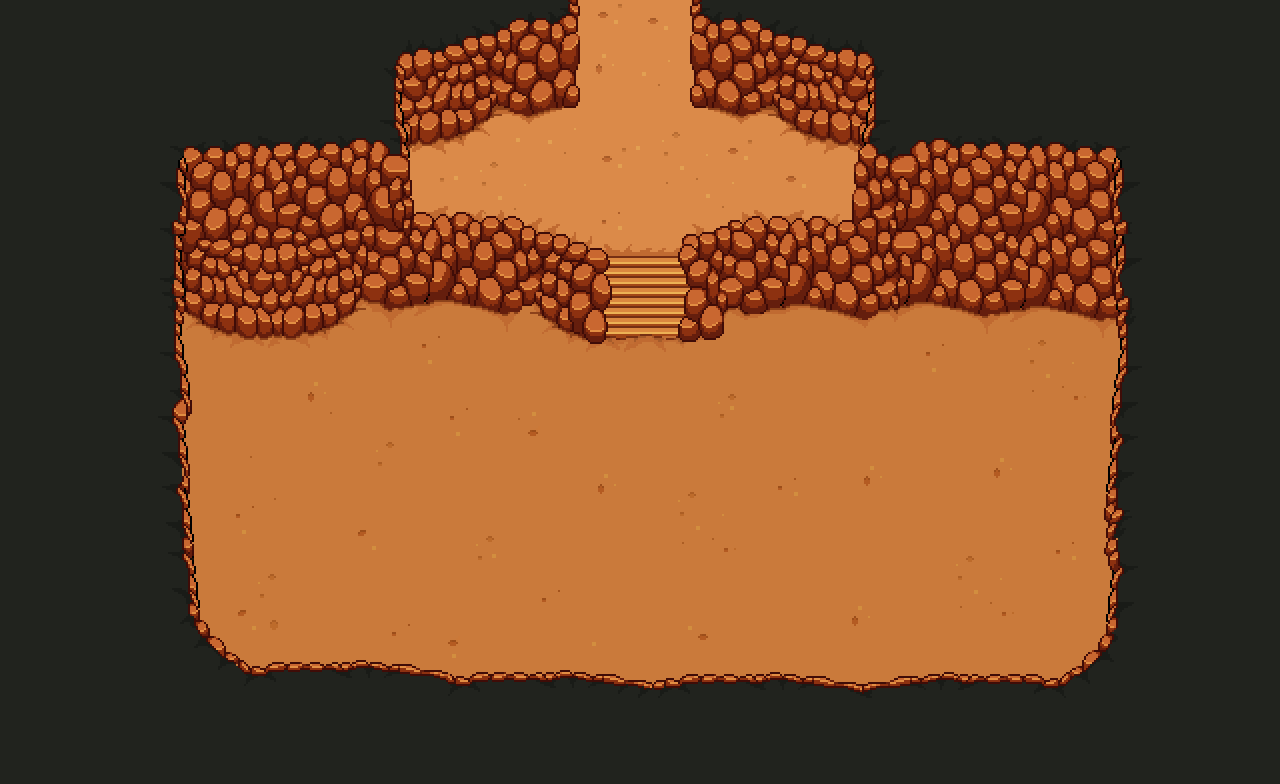 …to make sure you don’t spot the boss if you were to enter the cave from this side: 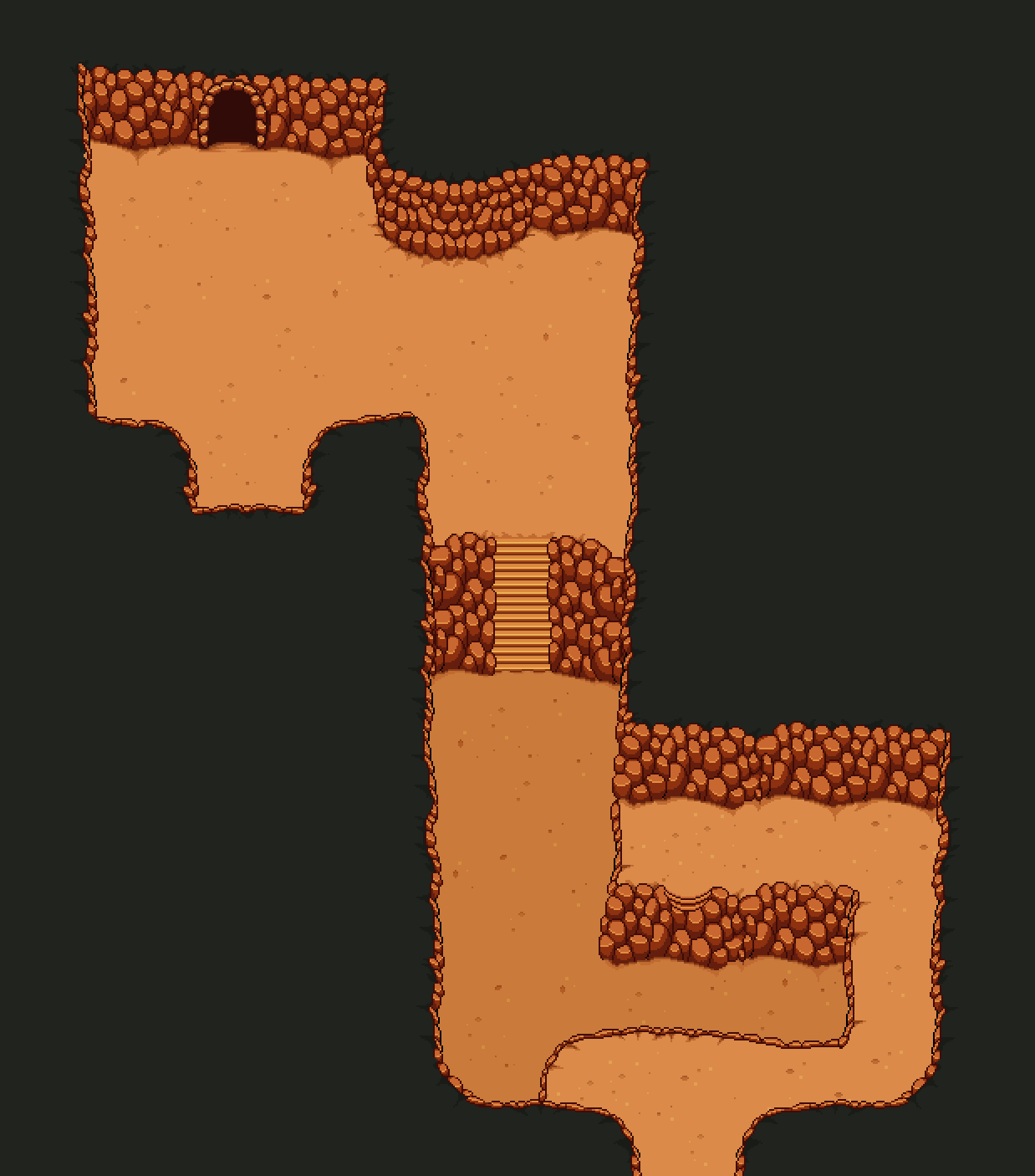 Finally, it’s time to decorate everything! Starting with the first floor, I added a bunch of crystals in the walls, more mushroom types, and a bunch of small rocks to decorate the areas as a whole: 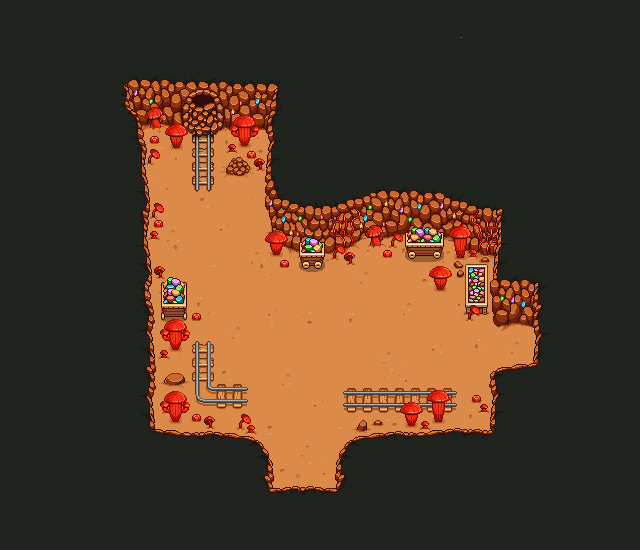 Then, it’s on to apply it all to all of the other maps! For this map I also created a stair leading to the upper floor: 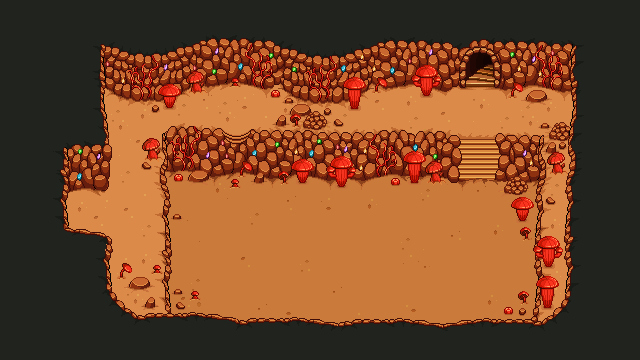 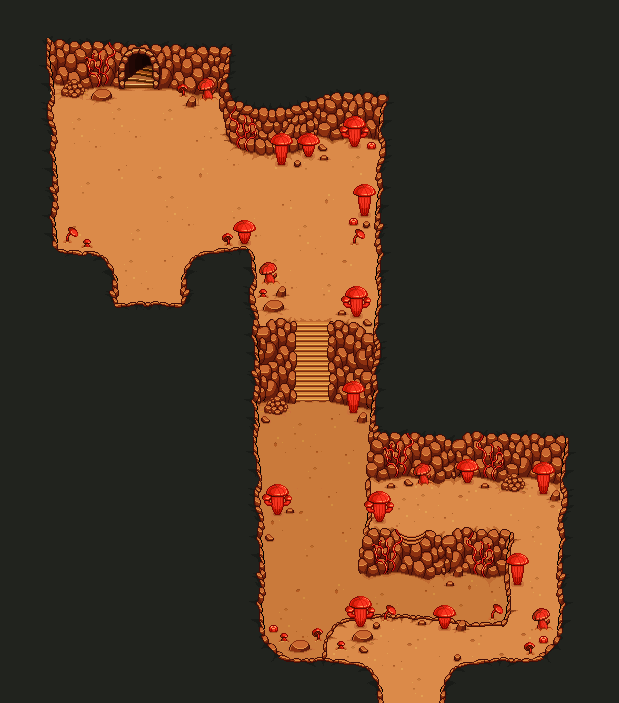 …and for these, stairs leading to the lower floors. Here you can also see the difference between the two maps, making them quite distinct from one another even though they’re the same size: 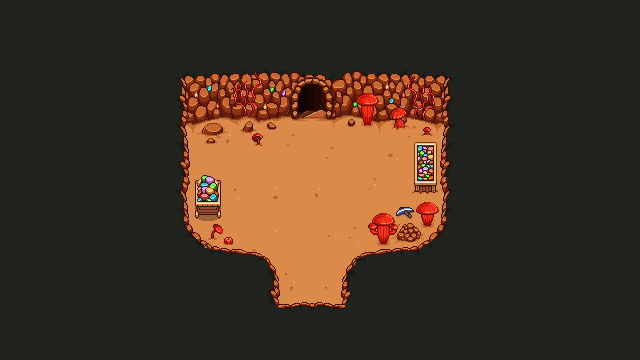 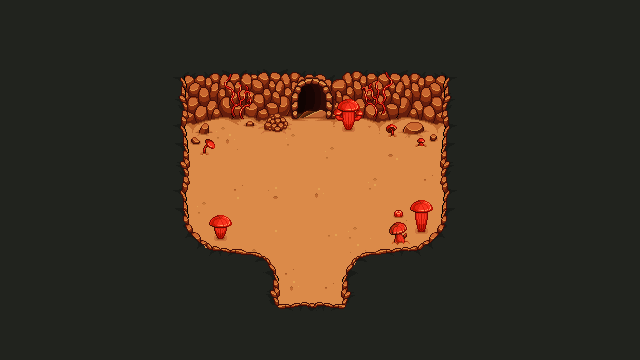 As you may notice, the cave with the alleged boss fight is missing from this lineup: that’s because I will make a different kind of decoration for that area! Stay tuned ;)

First though, it’s time for another portrait, and another video! I decided to record this one since I was making this portrait at home rather than the office, and the quick export feature that I use to make the images that make up the GIF is broken there (I should fix it, but I haven’t gotten around to it yet). So for now, here’s another video featuring the creation of one of the card players in the saloon:

And finally, let’s end the week with one more portrait. This is a very important NPC, based on our composer: Andrew Riley of Lucky Lion Studios! His NPC will, naturally, be a musician, who among other things will appear in Arcadia to help you change the town music.

In story mode, he’ll be hanging out in the desert town, playing music to anyone who passes by. Maybe he’ll make an appearance somewhere else as well? Who can tell!


Nice to see you guys are relentlessly making progress.
I think the mushrooms are repeating too much, though. Maybe just try to shrink/enlarge or mirror them (the small one is always hanging to the right).