This week we’ve finally started going through (and implementing) the sound effects! As usual when we start this part of development, we’ve sent out a request for a bazillion sounds to our trusted sound effect person, Fark who then promptly provides us with what we asked for, sometimes with several options!

To decide on these options, we go through each sound effect one by one and select our favorites. We tend to do this separately when we have the time, so to note others of our preference we have a grand google doc which looks something like this:

Whenever someone has listened to a sound effect, they put down their preference beneath the name of the sound effect, noting who they are by using the first letter of their name. If two people are in agreement that’s the sound that gets chosen, and if nobody agrees on any one option, there’s usually a discussion some time after everyone has noted their preferences.

Sound effects really make such a huge difference to the game, and we’re super happy to be able to work with Fark in this way and get the bestest sounds for Grindea! Can’t wait for you to hear those cute Loods – which, by the way, you might be able to later today when we have a frontline update scheduled! :)

Moving on with the desert stuff, there are still a bunch of interiors to finish. By now I’ve made so many random items across the game that a lot of them can be reused in various ways, and for this room in particular I used a bunch of old stuff either as is or after making some slight changes to them.

This house, you see, is a warehouse that stores a ton of random objects, so what better place to reuse a bunch of those random things, such as jars, chests, boxes and whatnot? Of course, we wanted to keep the feel of the desert interiors so where’s a bunch of carpets and such as well.

Below you can see it in its current form, though I couldn’t help myself and added a few more items after finishing up the video (as well as fixing the missing pixels on one of the carpets, oops) :) 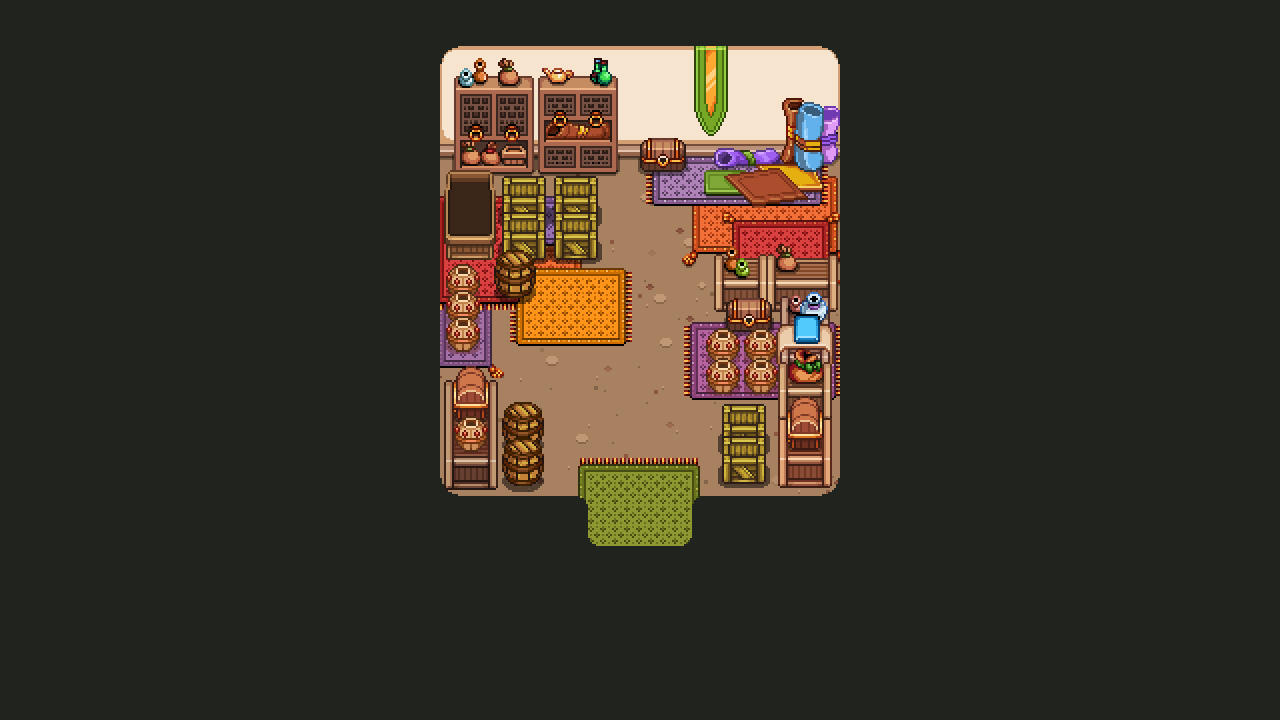 Next up we have another portrait! This guy is strolling along the market, looking at the wares. How interesting!

The next portrait is of one character you might have come across before, though not personally. You see, this is Professor Mandrake, who has been corresponding with Ivy recently. Such a swell guy, helping her with her research!

As you might guess, he will also be found in the desert. What he’s doing there? Why, wouldn’t you like to know!? You’ll just have to play and see ;)

Fred continues to make desert NPCs as well! Since I made the portrait for Mandrake, he began making his sprite:

When we designed this guy we though it’d be fun to make him a really buff guy. There’s this stereotype that professors are bookish and quiet, so this time we wanted to mix things up a little and make him a very charismatic, body building type of guy. Cause why not? :D

In the desert town, there’s another new NPC throwing coins into a fountain for luck:

…Meanwhile out in the water, something very strange is taking place:

Perhaps you recognize these silly guys from somewhere else. What are they doing in a boat? Where are they going? What will they do there? All to be answered in the upcoming main quest :D