Last week I made the entrance cave and the reward cave for the optional math puzzle sequence. This time around it’s the actual math puzzle’s turn to be made! In the GIF below you can see the basic process for the creation of each of these rooms: 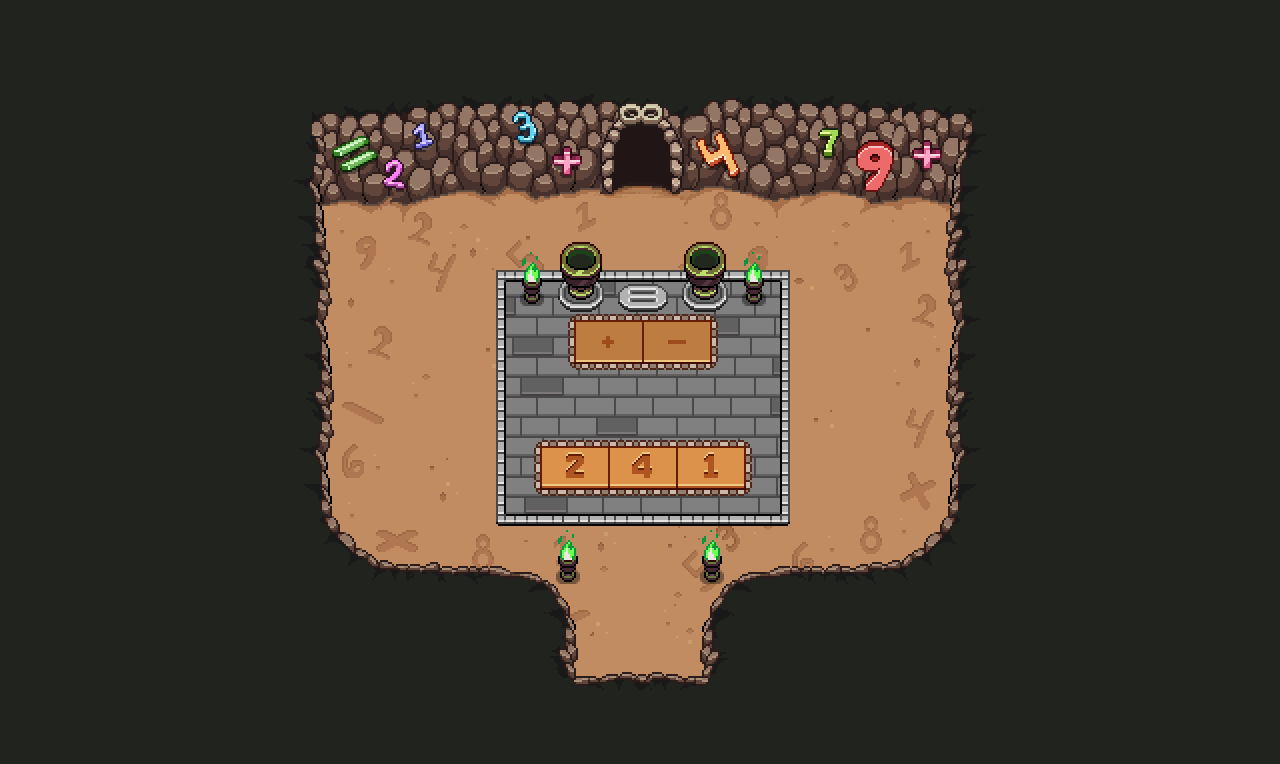 And now we can take the same graphics and apply them for each of the difficulty settings (yes, the last one gives me nightmares too – in fact, most of these give me nightmares): 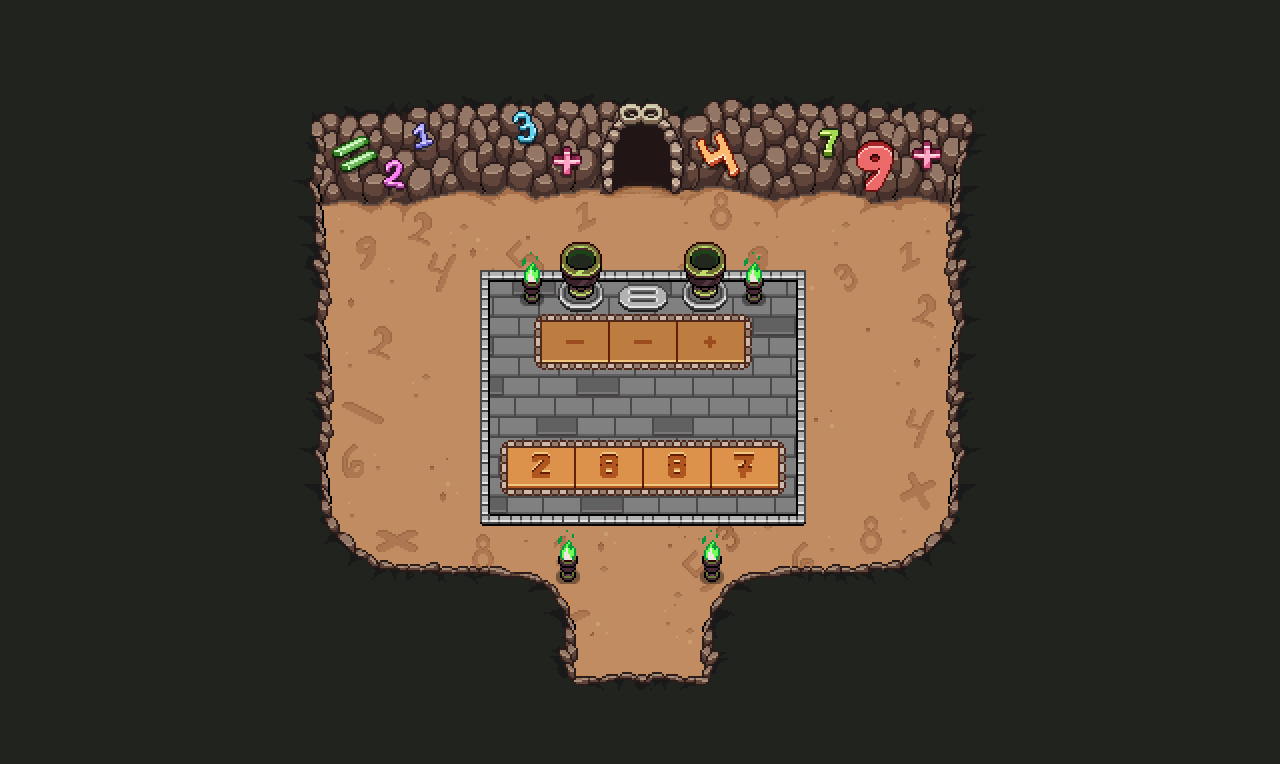 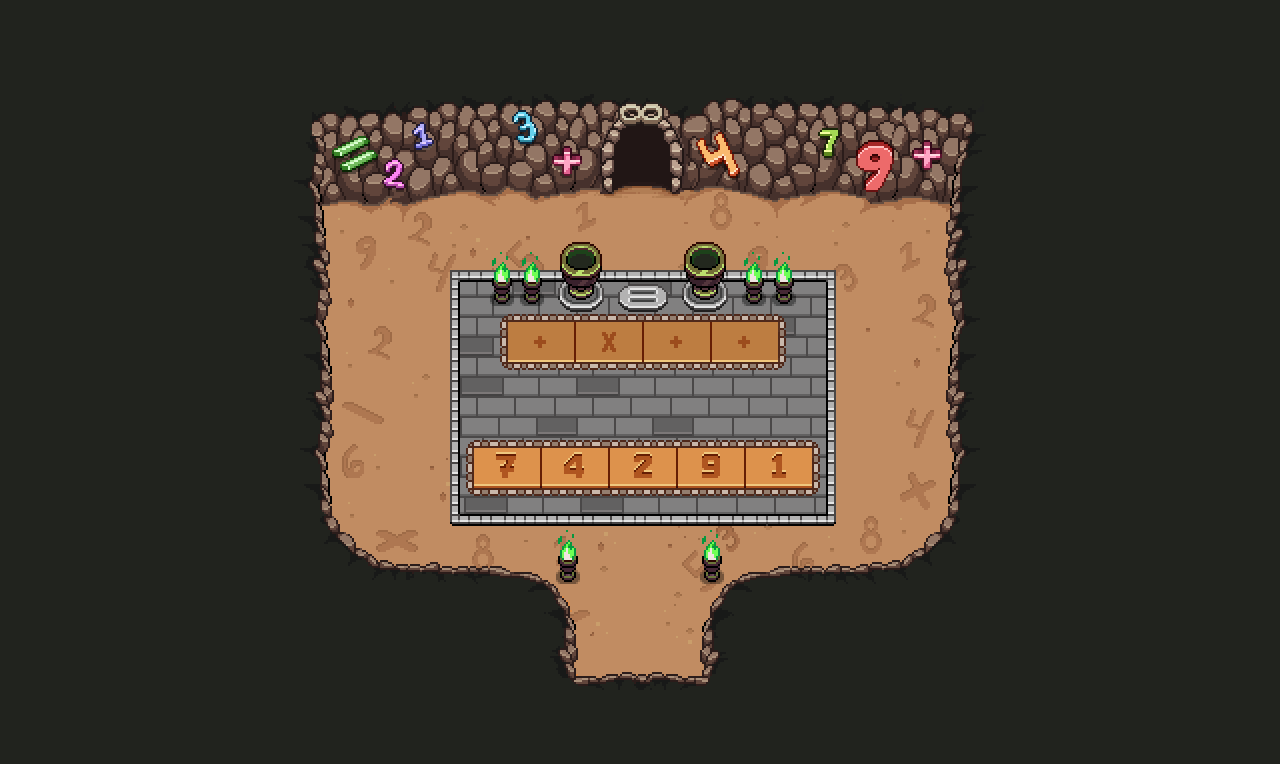 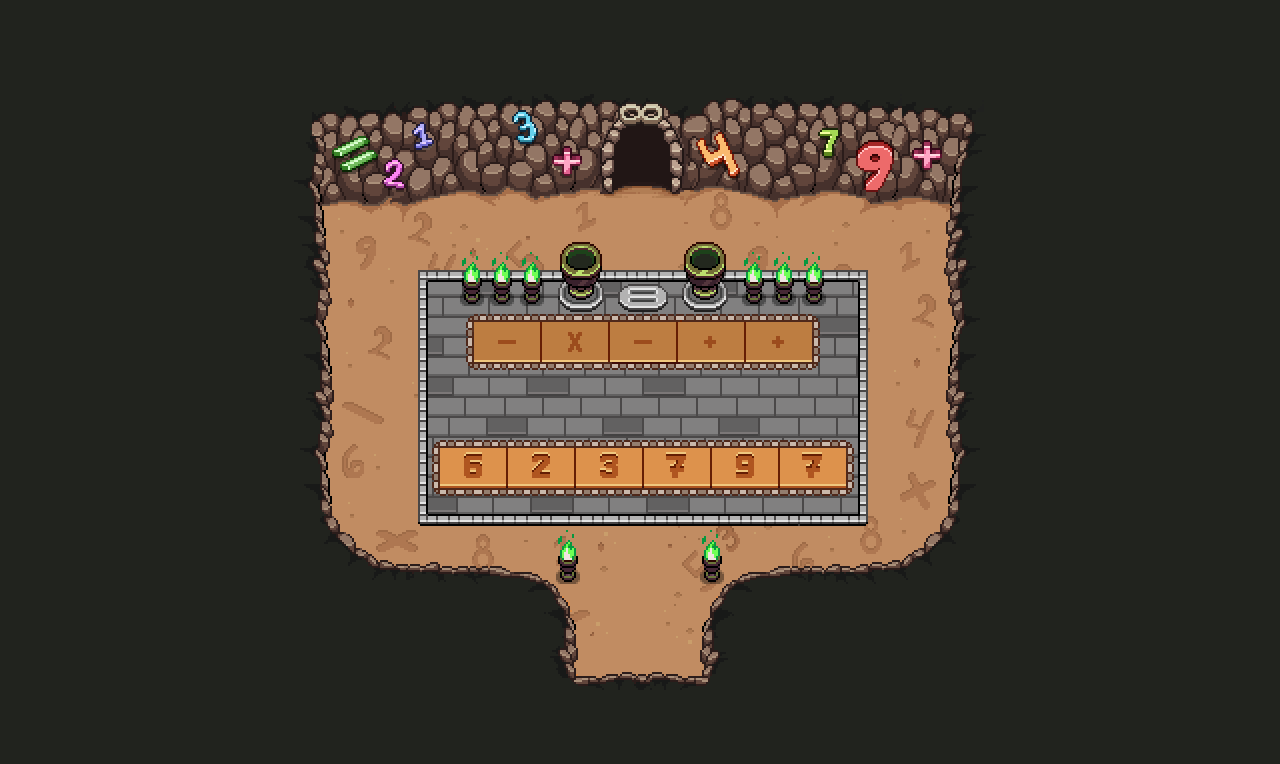 On top of these, there will be a set of wall- and floor variations so it won’t look like you go through the exact same room every time. For the endless math puzzle version there’s also this counter on the wall as seen below, which allows you to keep track of how many puzzles you’ve completed so far (we’ve capped it at 999 since we don’t think anyone has the stamina to do any more of those… but maybe one of you will prove us wrong?): 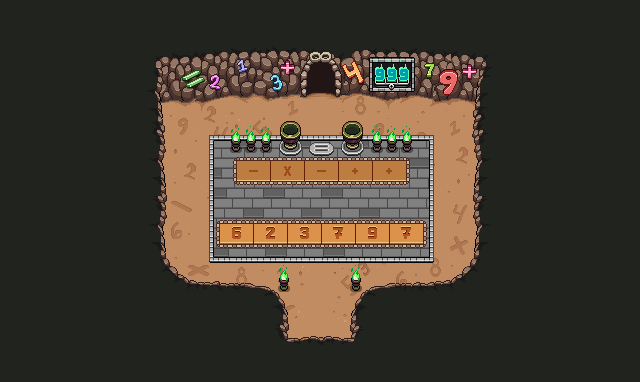 There’s still some random fixes I want to get done before the stable patch hits, so here’s a bunch of those again!

First up, closing up the tree so it doesn’t look like you can walk into it (I know this is a common enough problem in the game already!): 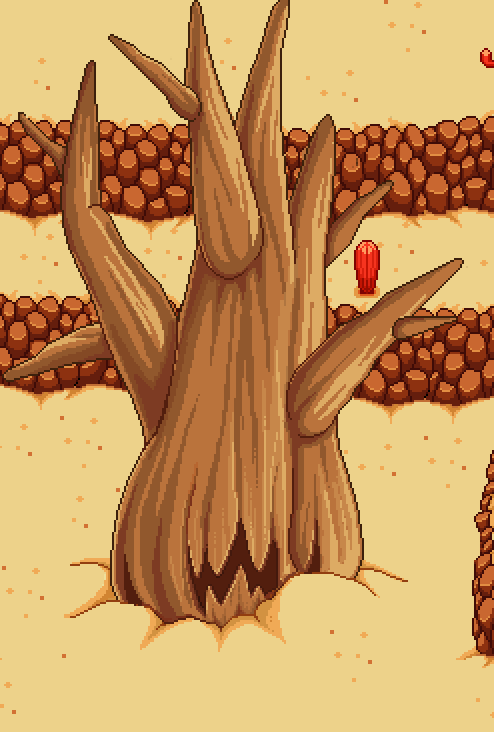 The optional Math Caves need its own entrance as well, which fits its aesthetics better than the current; hence the removal of the wood in favor of this more metal-y entrance: 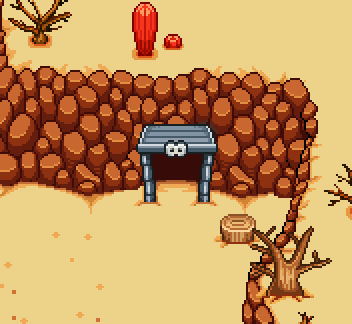 Of course, in the final thing, there will be a few of those flaming goblets as well.

There’s one of two more quests to add for the stable patch, one of them involving this drinking fellow at the Saloon. As such, it’s fair to give him a bunch of new expressions: 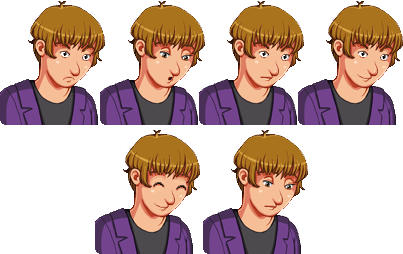 And since you can’t have a quest without a reward, here are two mysterious sprites involved in this quest:

It was a while since we had a meeting, but now it’s time to start getting serious about the Ghost Ship and design the 2nd and 3rd floors! So we sat down and discussed what kind of things we’d like to see, brainstorming various design ideas for how the floors could look.

We already had some basics down: we wanted there to be a kitchen and dining area for the ship’s crew on the 2nd floor, and a grand ballroom, a set of cabins as well as the captain’s bedroom on the 3rd. With this information in mind we made a bunch of sketches, quickly discarding a few of them.

Here’s one of our ideas for floor 2: 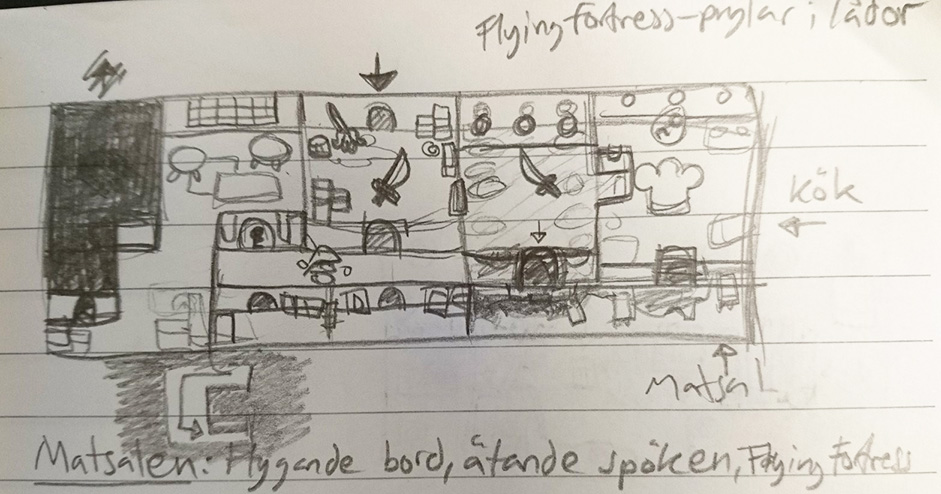 A quick sketch for one of the “puzzle” rooms: 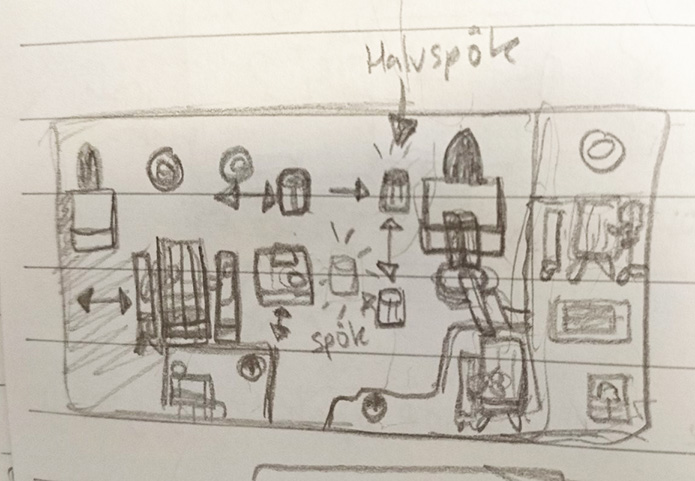 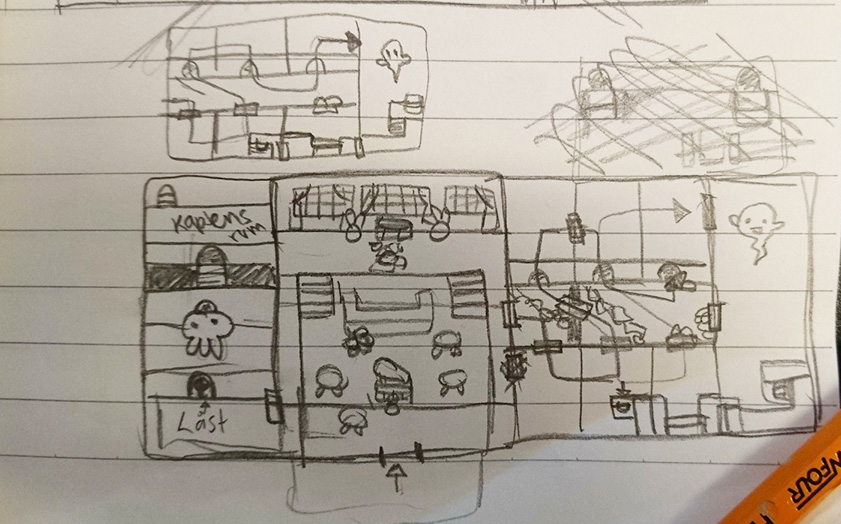 And one of the versions we scratched:

As before, we’re not quite sure about how some of the puzzles will look in the end, so I’ll probably stay away from making backgrounds for those rooms until we have some kind of prototype, focusing instead of the more static rooms such as the basic battle rooms! And one such room I can make is this cleaning room:

Using the base from a previous room idea, I make a bunch of cleaning sprites and water on the floor. The idea is that the mops will be animated and that this room will be used as a battle room, the first of the 2nd floor! 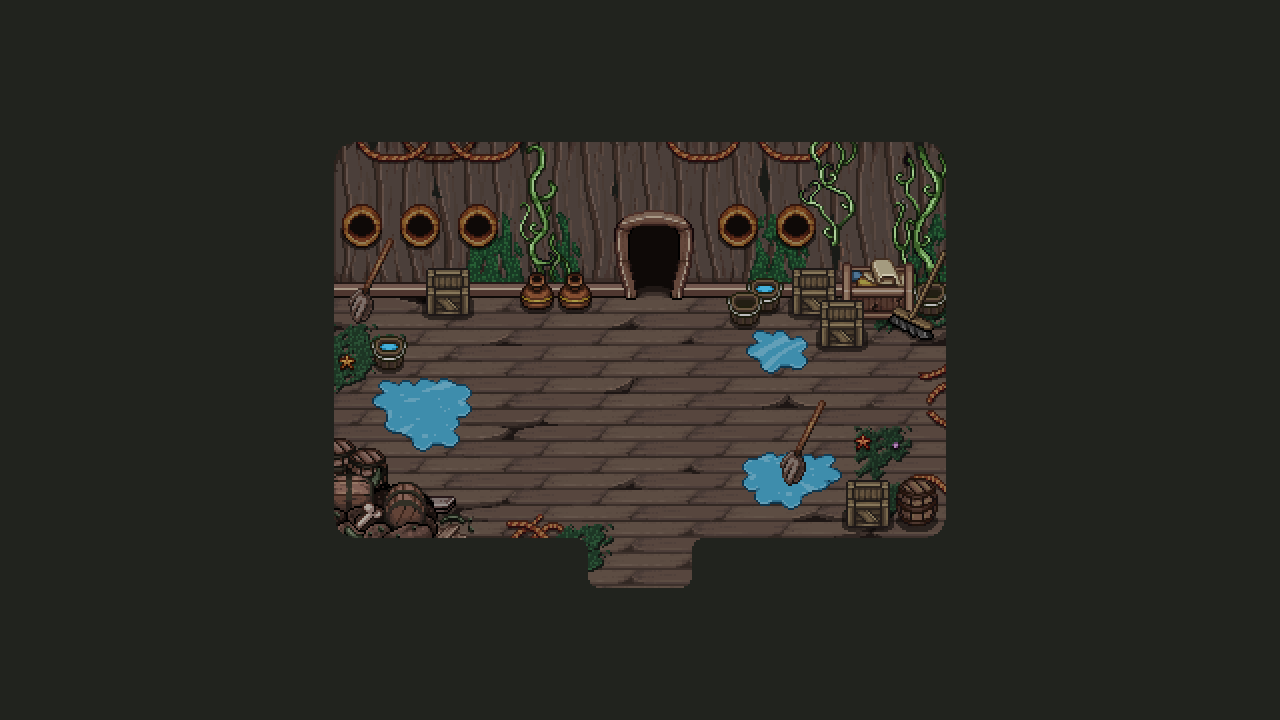 Meanwhile, Fred has been a busy necromancer, animating a bunch of skeletons (haaaaha – get it?):

The above are, as you might realize from the sword, the melee version! The magic user version looks slightly different and has another color scarf as well:

As Fred made these sprites, he came up with a rather interesting idea: to be able to cut off the head of the skeletons and have it turn into a stand-alone, different enemy (which would work much like a Jumpkin). The idea was born as he made the head on a separate layer and removed the layer from the animation:

Pretty neat, huh? I think these enemies will be a lot of fun! What do you guys think?


looks amazing like always, hope you guys will finish story mode before adding all the extra maps to arcade :)


“we’ve capped it at 999 since we don’t think anyone has the stamina to do any more of those… but maybe one of you will prove us wrong?”
Challenge accepted.


Hey, just wanted you to know that I’ve been following this game’s progress for a really long time, and I look forward to the day you’ve accomplished all your goals for the game. I love your sprite work, and this game makes for a wonderful break from my day to day stresses. Thank you so much!