Continuing with the memory orb stuff, it’s time for me to make a bunch of edits to the backgrounds! Since the world the memory orbs show are several (sometimes hundreds of) years in the past, it’s only natural some things have changed.

For one, since we’ve seen the Rabby statues be made around the time of your completion of the Collector’s trial, it needs a background version where they don’t exist yet:

And in Santa Fae / Seasonne, the NPCs comment on how it’s not supposed to be winter in the area yet. So what better way of showing the memory shown in the memory orb is nowhere near recent, but the make the world it shows in a different season altogether? 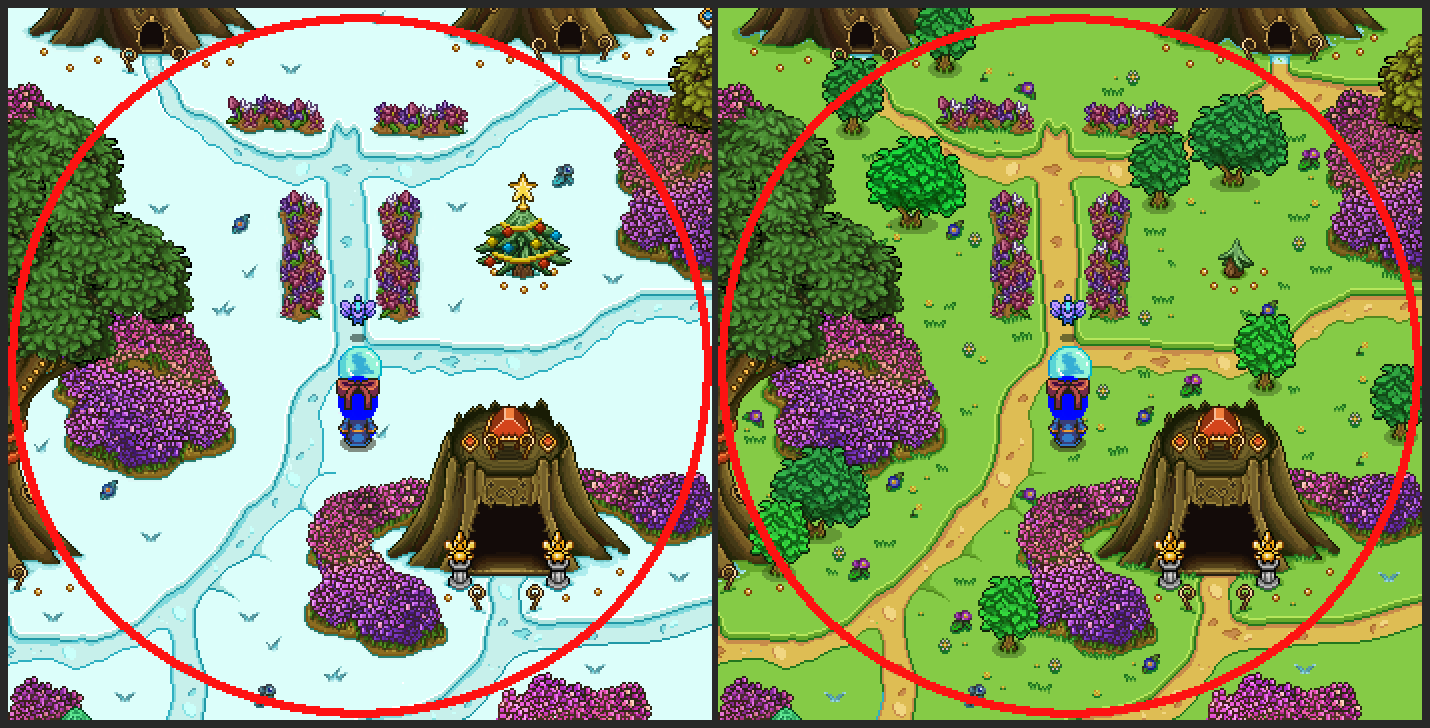 Finally, in Startington, we go so far back in time there’s not yet anyone living on the mountain. Instead it’s infested by slimes and trees!

Of course, in the above version, we used the old version of the trees, which has since been replaced by the correct ones (and slightly edited since Teddy changed the number of slimes between me making the background above and the finished thing): 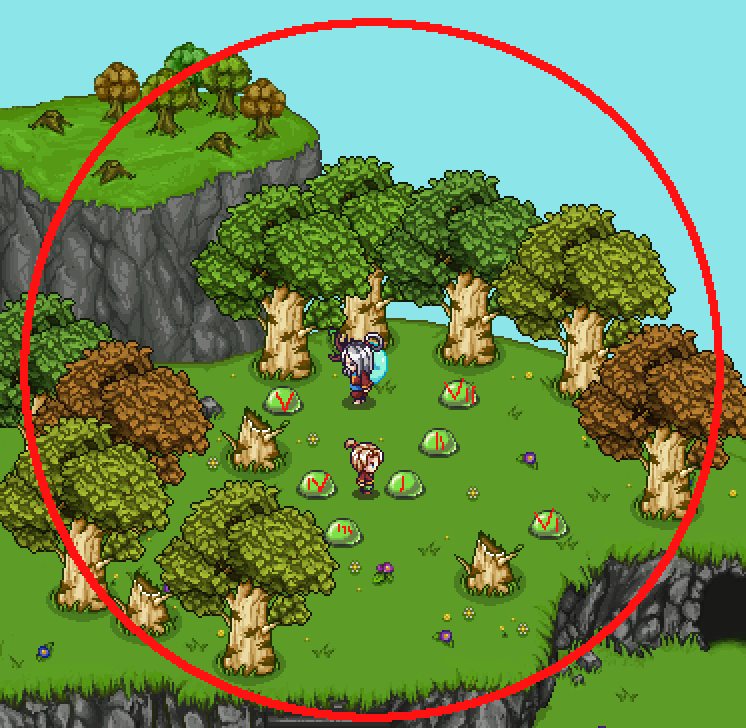 As we’ve also decided to add the season orbs needed to reach certain parts you haven’t been able to reach yet, I’ve been making some snowy paths around Grindea to get you across where you need to go: 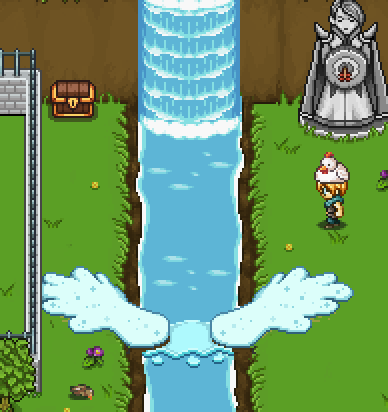 We’ve also decided to add a housing item in the form of a bowl of cat food! This will be awarded in a quest, and if you place the item in your house you’ll soon find you have a guest… :)

As such, Fred has been making some additional cat animations, to make sure your cat can move around the house:

Teddy, meanwhile, has been implementing said quest and will soon begin working on the next things, among which are those memory orbs!

We’ve also received the sound effects we need, and although there might be a few more needed for these side quests and memory orbs we’re currently working on, most of them have been chosen and ready to be implemented. I think it’s gonna be a quite different experience to play through the areas with all these glorious sound effects, so stay tuned for that :)

P.S. Remember how I mentioned the Ghost Ship “cleaning room” was the first room of the second floor, but it mysteriously didn’t have any stairs leading below deck? I’ve fixed it! And also added a missing door to the right, leading to the bunk room: 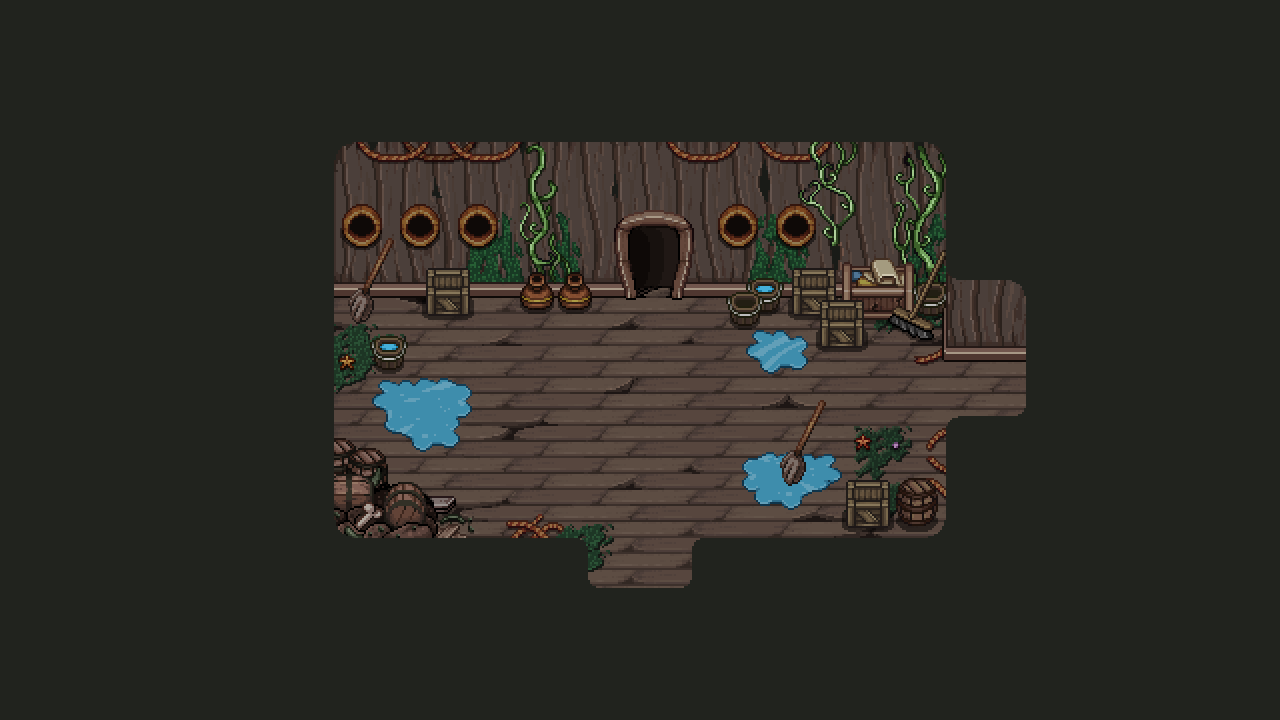 Though now I wonder if I should remove the windows haha! Having them there would probably only work if you imagine they’re *really* thick… Oh well!

What’s this?! A new kind of room, not exactly fitting into any of the sceneries we’ve been working on lately? Where could this be?!

Alright, so this is a “hidden” (not exactly) room that will be added to the church of Port Monnaie, where you’ll be able to read some interesting (?) documents on the history of the faith and Grindea herself.

Not sure whether this will be added to the upcoming stable patch or if it’ll be a later addition yet, but now it’s been made, anyway! 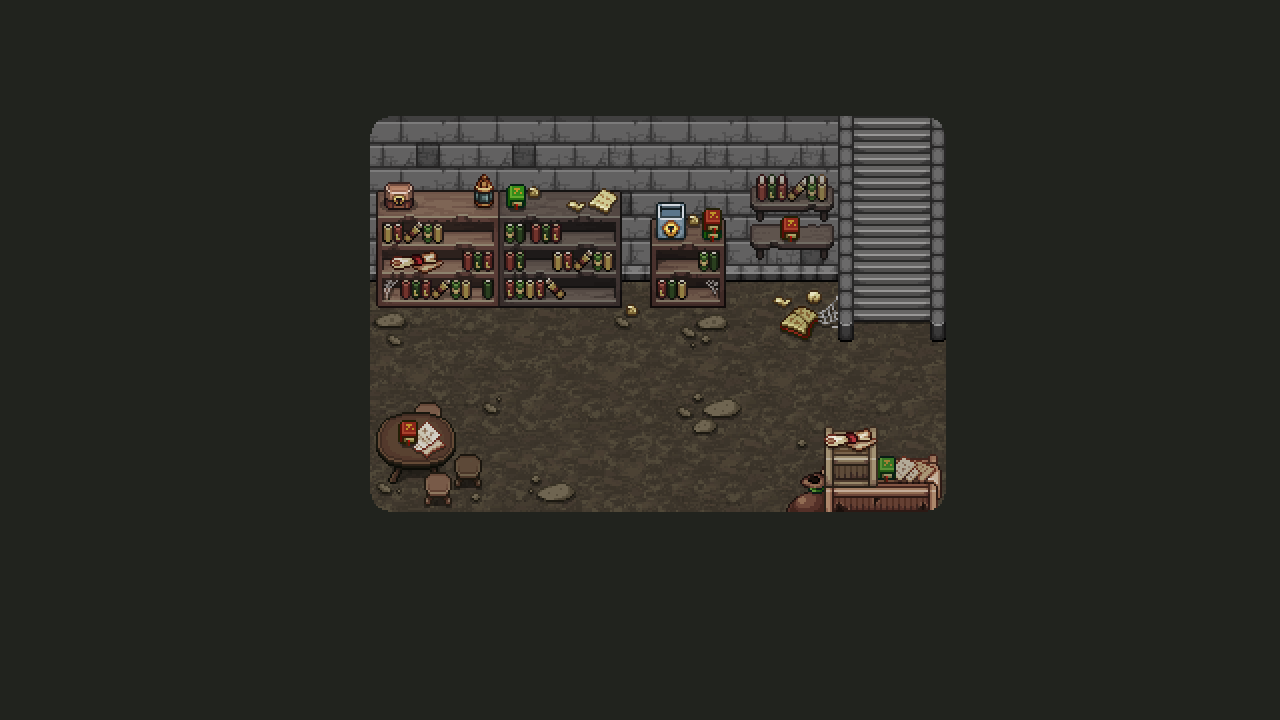 We’re not only making progress with the stable patch, there’s been a ton of progress in the enemy department as well! Let’s take a first look at our set of enemies, starting with the sword-wielding sailor:

As you can see, his sword is part of the physical world and can harm you even outside of the ghost world. Unfortunately, you can’t damage the sword, so you’ll have to toggle into the spirit world, where his ghastly form is visible, to do damage to him!

On this ship we also have a new and improved version of the Ghosty, which leaves a trail of some kind of ectoplasm on the ground. The ectoplasm doesn’t do anything in the ‘regular’ world, but once you enter the ghost world it will slow you down a lot! Both the Ghosty and the ectoplasm will probably be recolored, the ghost so it’ll look more unique compared to the Pumpkin Woods version, and the ectoplasm because.. red ectoplasm seems weird!

In the gif above you can also see something we’ve been playing around with: a line of skulls that do damage in the ghost world which you can only avoid by toggling back to your own dimension.

And this leads us to the third enemy so far, the sailor mage! These fellows have two main abilities – they can damage you, and they can turn another enemy into an elite. Below you can see our first iteration, where the mage channels a spell at you, which is basically a lightning blast that will hit you for sure unless you return to the regular world, as well as it channeling the make-elite spell at the sailor swordsman:

Since we felt this could be improved on quite a bit, we made a bunch of changes, merging the mage with the skull-line ability: meaning we removed the channeling lightning blast and instead having the mage cast the skull line we played around with in the Ghosty gif.

We also changed the spell type of the make-elite spell from something that channels on top of the enemy to an orb that is released from the mage and flows into the enemy it’s buffing, in this way making the battlefield much less cluttered while the mage channels his spells:

We’re also working on a third type of attack for the mage, where he’ll be able to pick up items in the regular world and hurl them at you from a distance – like some kind of poltergeist! Needless to say, working on these enemies around the the time of Halloween has been great.. :)

…so here we have the first iteration of the poltergeist attack! First as a WIP in Evergrind City:

… and then as a more finalized version inside the ghost ship, looking more like it should in the end:

This attack definitely make things more interesting! With this set of enemies, things are already pretty hectic and fun, but in the end we’ll likely make one more; a crab of some kind that is a ‘regular’, that is, living enemy that works the same both in the normal world and the ghost world.

I personally feel the battles on this ship are among the most fun we’ve made in the game so far, so I hope you guys will enjoy it too!

Lastly, Fred’s making a bunch of progress for the memory orbs as well! Gotta have young version sprites of Dad, Ivy and Charlotte after all! Here we have a bunch of them in action: