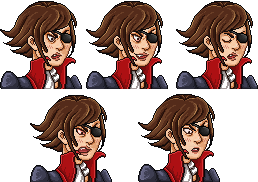 
The boss intro is fantastic!


Looks epic. I like how the boss is called “Vilya”, haha. Is every member of the team going to have a character named after them? :P


The guys cheering on in the background are actually Teddy and Fred! We’re a little group of good-for-nothing bandits, and Vilya is our leader. Sort of like Team Rocket!

We’ll make some guest appreances throughout the game, but we won’t take any spotlight from the main story :P