With the Ghost Ship drawer ever closer to completion, it’s finally time to start thinking about the future and the final dungeon! While we’ve had a bunch of loose ideas for it before, we felt it’s time to sit down and iron out exactly how we want it to be. 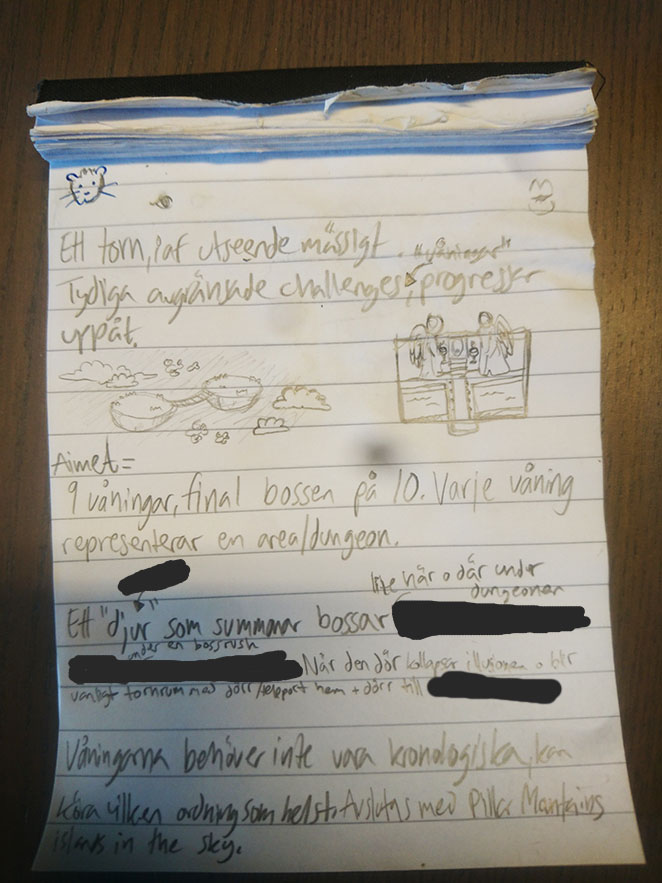 The number one thing we’ve always known we wanted is for it to be a tower of some sort. While we don’t feel the need for it to actually feel like a tower on the inside (we’d like it to have more rooms per floor than a typical tower would generally have), that’s the sort of general idea we’re going for: progression upwards (and the physical shape of a tower from the outside).

We also want each part of the rest of the game to be represented in this final dungeon, so it kind of feels like you progress through the game once more, with each floor being a distinct challenge inspired by the area it represents. As such, our goal is to have 9 different floors, one for each major area and dungeon, with the final boss residing on the 10th. These floors may still contain enemies and details from other areas than the one it represents, creating a sort of surrealistic feel to the whole thing.

We also want some sort of enemy that spawns bosses from previous places here and there throughout the dungeon, culminating in a boss rush containing several of the previously defeated bosses before you can finally reach the 10th floor and the last challenge of the game.

Our next mission will be to take some time and think about what sort of challenges would be nice to see on each of these floors, and puzzle them together into a great final dungeon. As always, if you have any ideas of what you’d like to see, feel free to share in a comment!

Next up, we’re taking a look at the lonely house in the top right corner, which you’ll eventually be able to reach through a bridge! Haven’t quite decided if we still want to keep the quest to build it or if we’ll just put it there one of these days and allow you to enter the house from the first time you enter town: we’ll see. Other than that, a fishing boat and some minor decorations to spice up the area :) 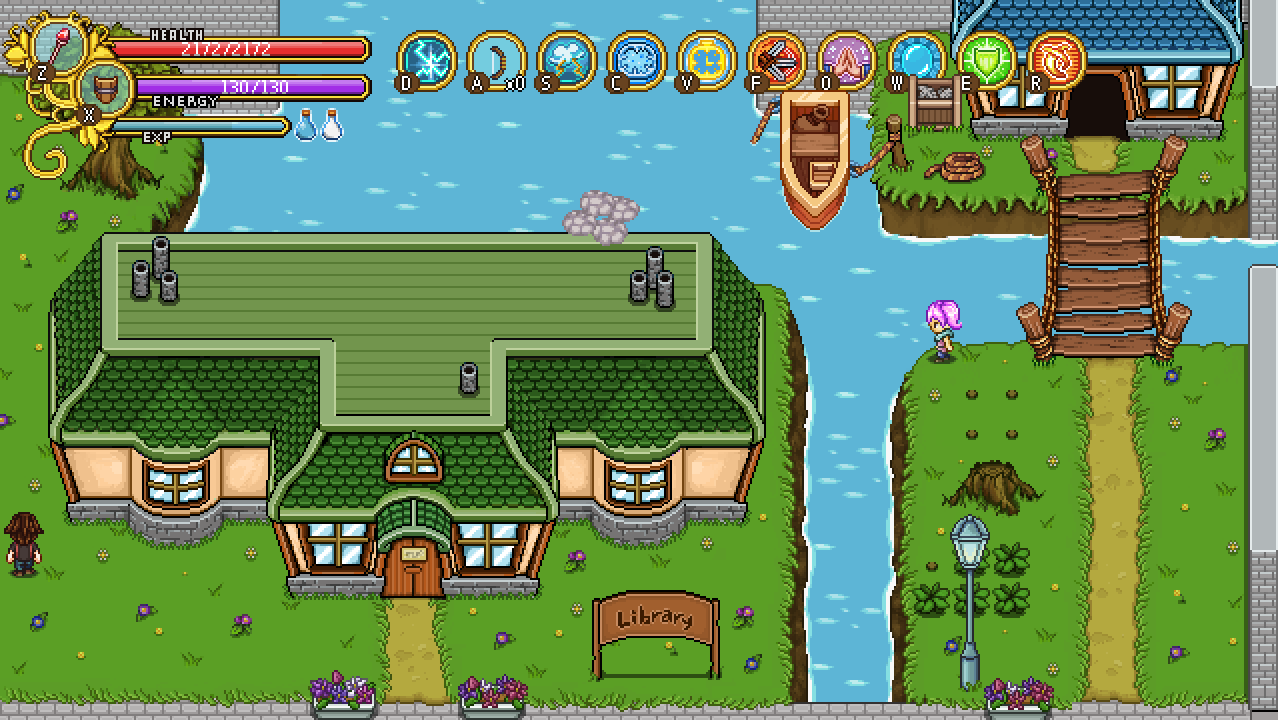 Next up in our Evergrind City improvements spree is the market area, where each of the market stands will get a little bit personality to make them stand out a bit more: 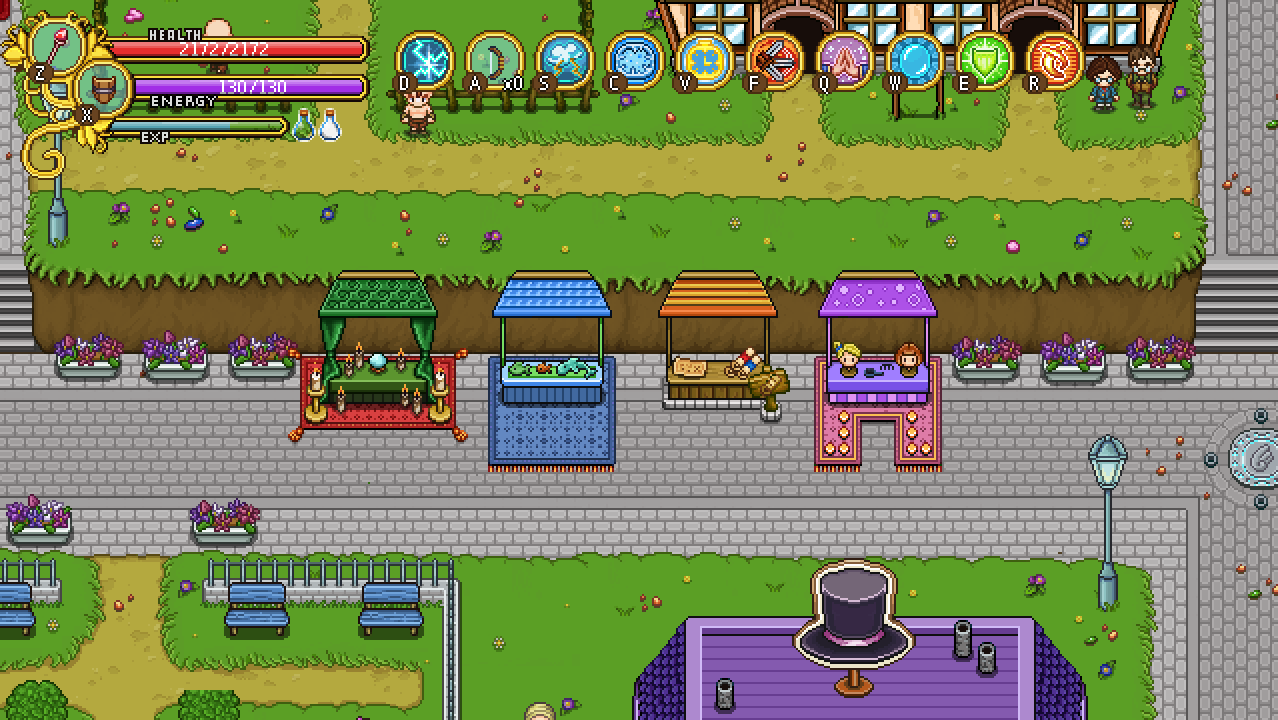 It’s been a while, but now it’s time for another boss portrait! This one featuring, unsurprisingly, the eye boss we’ve been working on for quite a while now! 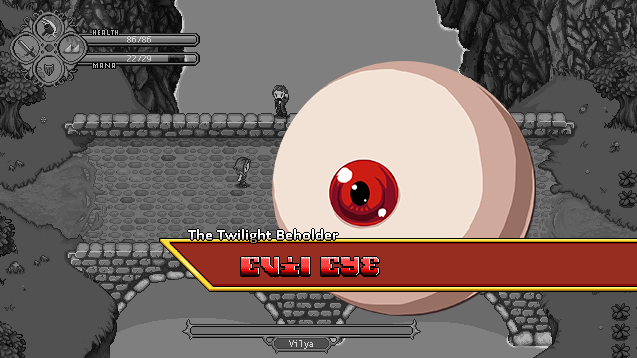 Meanwhile, Fred has started working on something slightly different; namely a set of new animations for a version of Dad you’ll run into in the creepy version of Startington you’ll find yourself very soon. What happened here?!


Thank you for your hard work! You do a lot of work, developing this game! It’s nice to watch you add or change something in the game. Will we ever be shown the story of the childhood of the protagonist and Luke? Will it be said how they met?


As a small suggestion; please post links to these updates also on the Steam Discussion or News pages.

I see a lot of people becoming impatient because there is no news nor updates over there. Just dropping a simple link (more would be better, but that is least effort) would make a world of difference.