Today we’ve had an extremely long meeting detailing the very final bits of the Ghost Ship, namely a bunch of cutscenes and the things that will drop from the enemies!

There are three important cutscenes left to finish, and in order for Fred to be able to write down each animation he needs to make, we decided it was time to plan them out in detail. The first cutscene we discussed is the very first cutscene of the ship: when the Black Ferrets drop you off. This will be the last planned scene we have for the Black Ferrets, so we want them to go out with a bang (not a literal bang – don’t worry, you won’t have to fight them again). The second and third cutscenes are when you start your battle with Luke and what happens after you’ve (hopefully?) defeated him. To avoid spoiling too much, I won’t go into detail of how any of these cutscenes will unfold, but I think all three of them will be quite exciting!

As for the drops, here’s what we’ve come up with so far!

The Hauntie will drop purple ectoplasm, twilight core, fabric, and a new blindfold.

The crab will be a little different! It will drop a pincer (a one handed weapon), but aside from that it will only drop pieces of its armour; however, it will drop a lot of them! So whereas an enemy will usually only drop one of each item, the crabs will drop multiple of the same, which can then (once you have enough of them) be crafted into either an armour, a shield or a helmet!

Other than that, we’ve come up with a couple items to be found in the chests around the game: a skull housing item, a bottle of rum, and a pirate captain’s hat!

We’ve also jotted down some ideas for the enemy cards, and since we’ve more or less settled on the size of the area where you’ll battle Luke, it’s time for me to get back and do some more work on the ghost ship again! Exciting times :)

So, time to get on with the remaining ghost ship stuff! First up, getting that ship ready for battle! Aside from the changes seen in the gif below, we’ve also increased the ship’s size again by quite a bit from last time you saw it:

And now, some drop and equipment fiesta! First, the things that will get dropped by the skeleton enemies, plus a couple of Hauntie drops: 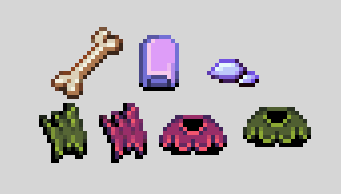 Next, some things dropped by the crab, a bottle of rum, a skull made for housing and the strange twilight core: 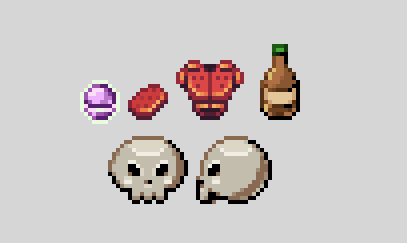 And finally, a bunch of equipment plus the appearance of the strange device that allows you to look into the ghost world! 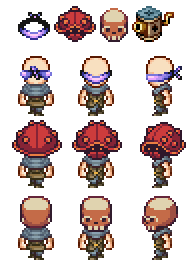 
Guys, is it possible to defeat Luke?