Let’s start off this week with some more maps! These ones belong to the desert, and again, there’s two of each kind: 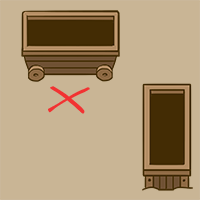 “East of the broken pillar, amidst the desert dunes”

“Well, well, well! It’s been a long (and hot!) day, but good luck ever figuring out where I hid this treasure!”

Next up is the portrait of a character you might have seen a bunch of times throughout the game, but who has never had an opportunity to speak… until now! Excited? Let me present to you yet another talking artefact:

Some more fixes for the stable release! An improvement of the sword portrait, some new battle indicators and a broken window in Ivy’s office! Oh my…

Now it’s time to add some additional expressions to some by now well known faces! Dad, Quinton and Ivy are some that are getting a whole new range of emotion for the final cutscene of this stable patch! What do you think is gonna happen? :)

I know it’s been a long time now since you got any updates from the animation side of things, and let’s just say it’s because this final cutscene, animation heavy as it is, is also quite spoilery. Things will be revealed, and some things might never be the same again. So we’re keeping away as much of it as possible for now. We’ve made quite a bit of progress though, so at least it’s progressing as it should.

Here’s a little sneak peek of some of the non spoiler-y animations:

What do you think is gonna happen? :)


Do you have any idea when the next stable update is going to be ready?


@Raeden: At the end of this week or at the beginning of next! We’re at the verge of pushing out the “Stable candidate” on Frontline now. It will probably arrive tonight or tomorrow!


I love this game so much! I have been following you since the begining :)

Although, I just happend to get the game in Steam, hahaha. Now, my wife, a friend and me are playing online (we are lvl 24, i think).

We will be waiting more of your updates.


I really hope that sword’s name is “Swordy.”