More pin work this week! Here we have the progress of two more pins, as well as two more icons and a bunch of colour variations: 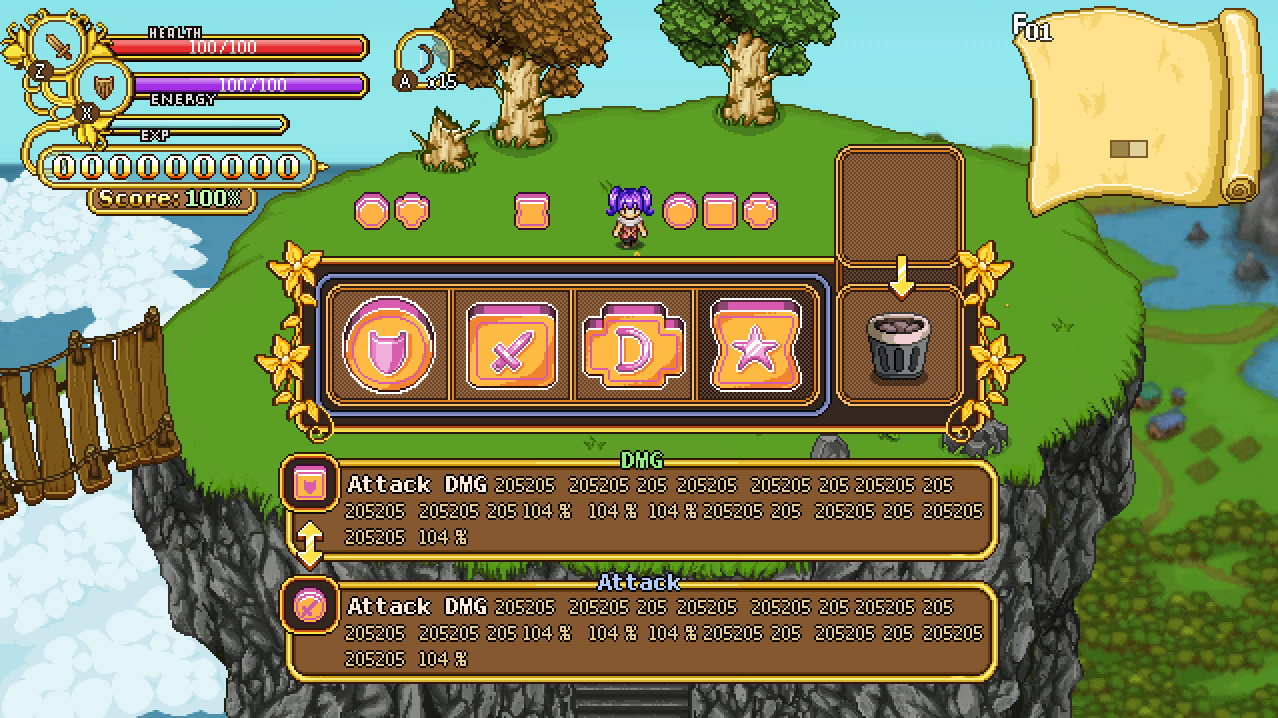 For some of you these aren’t exactly new; the last couple of days we’ve uploaded what we have done with the pins right now as a hidden command for our most devoted testers to try out. So far, we’re pretty happy with the feedback, and the feeling we have right now is that pins is definitely a positive thing for Arcade Mode! So far so good; though obviously we have a lot more to come up with and add before we are satisfied – we want some epic variation, after all :)

Speaking of variation in Arcade Mode, another thing we’ve been discussing a lot lately is the addition of more types of rooms, to make each run feel even more unique. Some of these ideas include:

Cursed Item Shop
A shop that sells items that are really good but you can’t unequip them or swap them out (this room type would mainly appear on the early floors, so in later floors the equipment might fall off and not be as good anymore). Possibly other curses as well.

Zombie J
A ghastly version of the bow salesman who sells a cursed quiver that is smaller (so you’ll have fewer arrows in total), but you can fire extra arrows at the expense of your own health. Could appear alongside the Cursed Item Shop, to mirror the regular shop.

Archie
The guy who appears here and there around the world to open up shortcuts or sell you items you’ve missed and can’t reach again, only in arcade he’ll offer you access to a bonus room he’s found. Pay up the money and he’ll let you through to a path he’s cut up leading to either a random guaranteed ‘good’ room (a shop, healing, etc), OR…

…A Lood Fountain
A room with a bunch of Loods floating around a fountain! We haven’t decided if this is only gonna be the reward for paying Archie or if it’ll be a room of its own. In the end we might end up having this be Archies only reward instead of random rooms as well. We’ll see!

A Mischievous Sprite
Think we might have mentioned this before ages ago, but it was brought up again. A sprite that appears in multiplayer only, secretly offering one of the players an advantage of some sort at the expense of his friends (like them getting less atk, def, aspd or something like that). Just something a bit silly to mess with your friends!

It’s not a certainty we’ll add all of these, but they are some suggestions at the very least. Which one is your favourite? And what sort of additional rooms would you like to see?

Now, some more stuff for the pins! Starting with a trash can icon for when you’re about to throw away one of your pins: 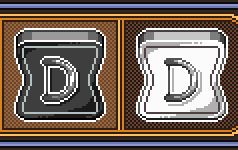 These pins are what we call “sticky” pins, meaning they’ll permanently take up a slot and there’s no way to get rid of them. Better think twice before you equip these!

There’s also another shape for pins, as well as a specific icon for potion related pins:

And finally, one more palette to mix things up a bit:

After a few discussions as well as checking in with the community about the subject, we’ve decided that rather than have pins appear from the get-go, it will be another thing that will be introduced after you’ve played arcade mode for a little bit, complete with its own NPC who will tell you how it all works. As such, I was tasked with making his portrait:

Do you recognize from where we have gotten the inspiration for this guy? :)

Meanwhile in Freds department he’s been working on some effects that will spawn around the player for some specific pins where you collect charges as you battle, as well as doing some work on the Pin collector himself:


With Majora’s Mask being possibly my favorite game ever, seeing a Happy Mask Salesman reference makes me very happy indeed~


As a big fan of the Arcade mode that has beaten the Mimic, I am very happyto see every new addition. Thanks for making this mode even greater!

Me and my brother always play co-op mode and most of times we reach Temple of Seasons with no problems at all, unless we encounter Bashie and Smashie (too overpowered in multiplayer?). They give us a really hard time.
Then if we are lucky enough to not encounter the Hydra (they also seem to be overpowered) and beat Winter, we can go all the way through to the mimic. Our build is mainly based in Fire Ball (me) and Ice Nova (my brother).

In our case, since we started playing Secrets of Grindea in 2016, we have only changed our builds once. We started with Spirit Slash (him) and Heroic Slam (me) and we only changed by chance deciding to try something new after a terrible start losing HP several times. That was when we discovered our current build.
Since then, we have never changed because it is (or it seems) not worth.

In my opinion, the perfect way to make people change their build is to randomly offer a bonus for one specific skill in each new run. For example, hihger damage for Earth spells. Or bonus to 1H or 2H build. Bonuses that are clearly going to be better than your favorite build.

Last comment regarding the new “Zombie J”. HP is the most valuable element in Arcade. How would you compensate to make worthy losing help in order to shoot an arrow. It should make massive damage. Otherwise I don’t know why you would interested in such a thing for a successful run.