This week we just want to wish you all a merry Christmas, as we’re taking a few days off to spend with our loved ones! Happy Holidays everyone, thanks for following us and see you next week!

Another week, another update! We’re now halfway through December and everyone is counting the days left before christmas. Here at the Secrets of Grindea office we keep pressing on while dreaming of the traditional swedish christmas cuisine.. :3

This week Vilya made even more portraits! She also revised some of them, and revisions will keep being made throught the entire production. Here’s an example of changes being made on the go, as well as a few of the new faces:

Better? We think so!

She also started making a few props that will appear inside one of the buildings in town. A few weapon stands, for example:

Besides adding some new stuff to the super secret first boss, Fred has been swinging away at some new skills and NPC sprites!

This here is one of the early skills from the one handed weapons skill tree (we have 8 trees in total). We haven’t got a proper name for it yet, but it plunges the hero forward damaging anything in it’s path. Range and damage increases by leveling it up.

“Treasures, puzzles, fight!
Only the best are chosen.
Are you strong enough?”

[Teddy has mostly been laying the foundations for the spectacular trials! For the puzzle part, a few more puzzles were created to ease new players into it!] 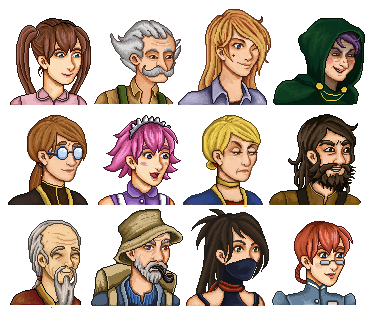 This week Vilya worked on the arena which now is in waiting-mode while Fred takes care of the next step! It is almost done, but need some tweaking and of course an excited crowd to watch your trials.

While waiting, she spent her time making portrait for a cutscene involving the first mini-boss battle, a mean bandit leader and her two thugs. 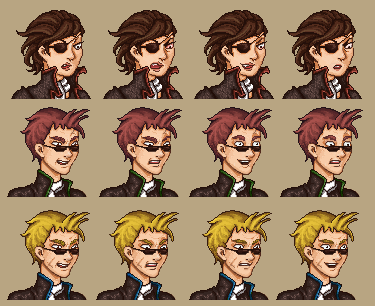 Next thing she went on doing was small props to be placed all around the city. Many more to come, of course:

Fred has spent some time adding a few flavor animations to the bandit gang, this here showing one of the thugs cheering on as the leader fights the player/players!

But mostly he has been busy with bringing the first boss to life! Even though being sick (damn you Vilya!) he has been able to finish up most of the animations, with just a couple left to clean up!

We don’t want to spoil all the fun by revealing too much about the bosses yet, so you guys will have to settle with this for now! Who’s that pokemon!? 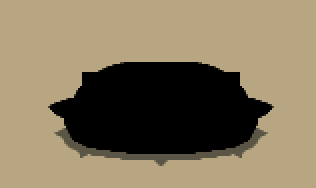 [I have made some in-game cutscenes, and also implemented the first ‘real’ boss. Of course, unlike in some games (looking at you Tales of Vesperia), you can press escape during a cutscene to skip it!]

Next week: The city keeps growing and the first NPCs moves in! Also, treasure hunting (for real this time!)