After a few hectic days at Gamex, we would like to thank everybody who played the game, gave us feedback or just stopped by to talk to us. It was a blast as always seeing people play the game for the first time. Hopefully, we’ll be back again next year with a version near completion.

Even though we’ve had a pretty busy week, production never stops!

Vilya has begun working on graphical assets for our very first dungeon in the game, which is kind of super exciting! There’s still some other things we must rap up before we can start actually designing the dungeon it self, but we’ll get there soon enough.

In short (and without spoiling too much, but still spoiling) the first dungeon is a ancient military base, driven by magic technology. It is inhabited by strange military machines designed purely for combat. Since Grindea has been at peace for a long time, what the Ancients needed a military base for is somewhat of a mystery. A mystery for you to solve!

We did some experimenting with the colors and lighting before settling on somewhat of a darker tone. 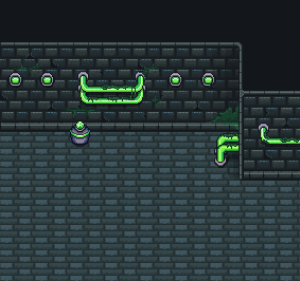 The first version, above, which we discarded shortly after. 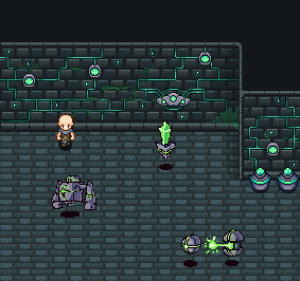 Second version, which we liked better! With enemy sketches and character added for effect.

We felt the second both fit the theme better, as well as helping the enemies stand out from the background. Of course, we still wanted it to feel like both the enemies and the environment belong together. Therefore we chose to use magical energy details in both the backdrop as well as the enemies themselves, to connect the two. Once again, we did some minor variations of the color of the energy, to help separate the two even further.

Besides the temple, Fred has done some NPC animations, as well as wrapping up the level 5 version of the Fireball spell.


Reminds me a of the sewers in Chrono Trigget when you get to the future for the first time.
Looks pretty nice to me.


omg this looks awesome :c
is it possible that i can get a beta key??
ive been waiting soo long and was heartbroken that ive never recieved a key at the key giveaway and the patches…

I love everything about this game and i watch your stream!
i saw u guys animate the fireball and it was actually really cool and it shows how hard it actually is to animate. Its a very tedious task.


Looks nice as allways. Fishing in the dungeon?;)


Want a beta too!


Now the NPC doesn’t just stand there all day. He tills the same piece of soil all day! *used car salesman smile and thumbs up*

Chrono Trigger like sewers and a fireball that size seems pretty cool. With Election Day today, I’m sure the official release is just around the corner.


Epic! Can’t wait for the release!


Been watching the progress of this game for half a year now. It’s everything I could enjoy in a game and will be ready to play the moment the opportunity arises. Thanks so much for all the work you are putting into your game. <3


Looks really awesome, can’t wait to play it. I like this “steampunk-green-acid-slime-style” :).


I dont wanna complain about your graphics, but i would rather form the fireball more… ball-like.
The heat tip has some flair but doesnt resemble a fireball at all i think, more like a fire bird.
In general i like the animation but as said, i would give it a more ball-like shape (round it at the tip, lighten up the center in some elipse shape)

You got my mail, if you need assistance, just write me.
Im not a graphics specialist but i got a few ideas, if you need someone to look over it


WTB pre-order beta access. No but really the game looks great. Doesn’t let me vote on it for green light yet but, the vote is waiting.