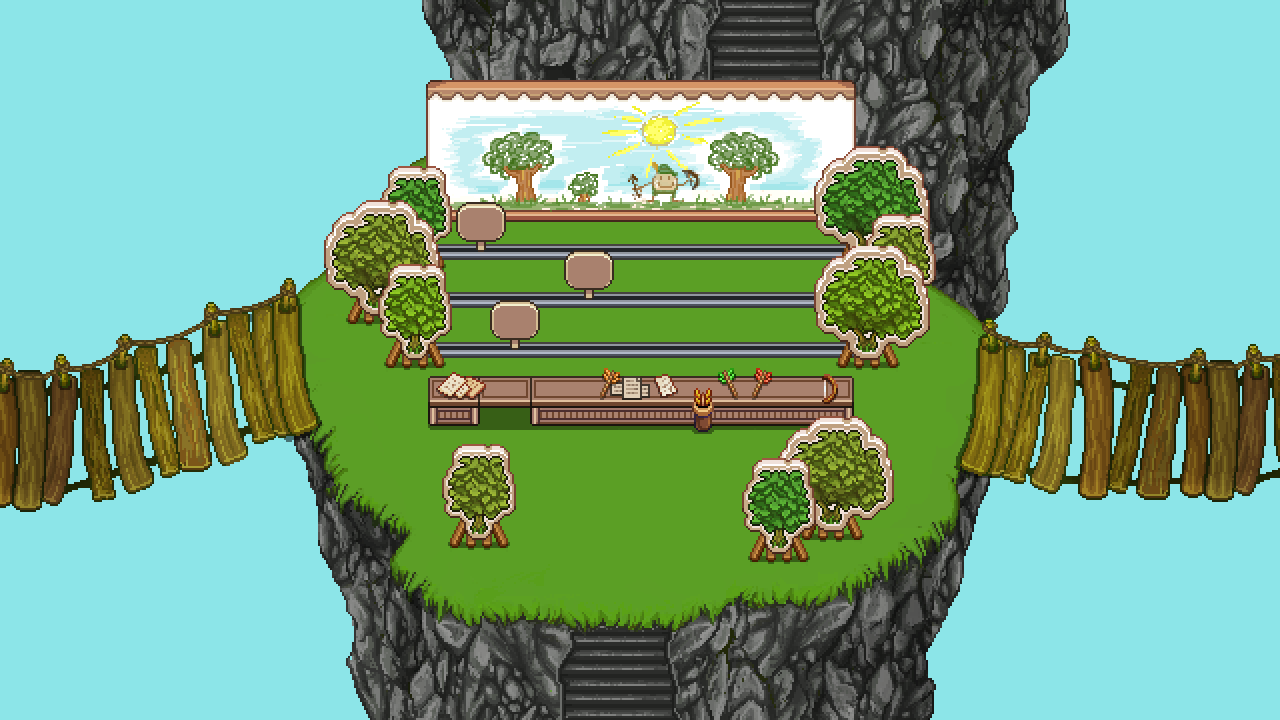 For now, this style will appear on each of the floors, but I have a crazy idea of making a special background and use different bush cutouts for each floor, if I manage to find the spare time for it!

Next up, some additions and changes to the transmutation GUI! For starters, the mechanic needed a proper ‘shop title’ splash, and a button for activating the transmutation service to begin with, as seen below:

We also decided to make a few changes to the UI itself, adding a couple of maracas, removing the title bar (it seemed unnecessary), and changing the colours of the gems in the interface to better represent the rest of the UI colours here. 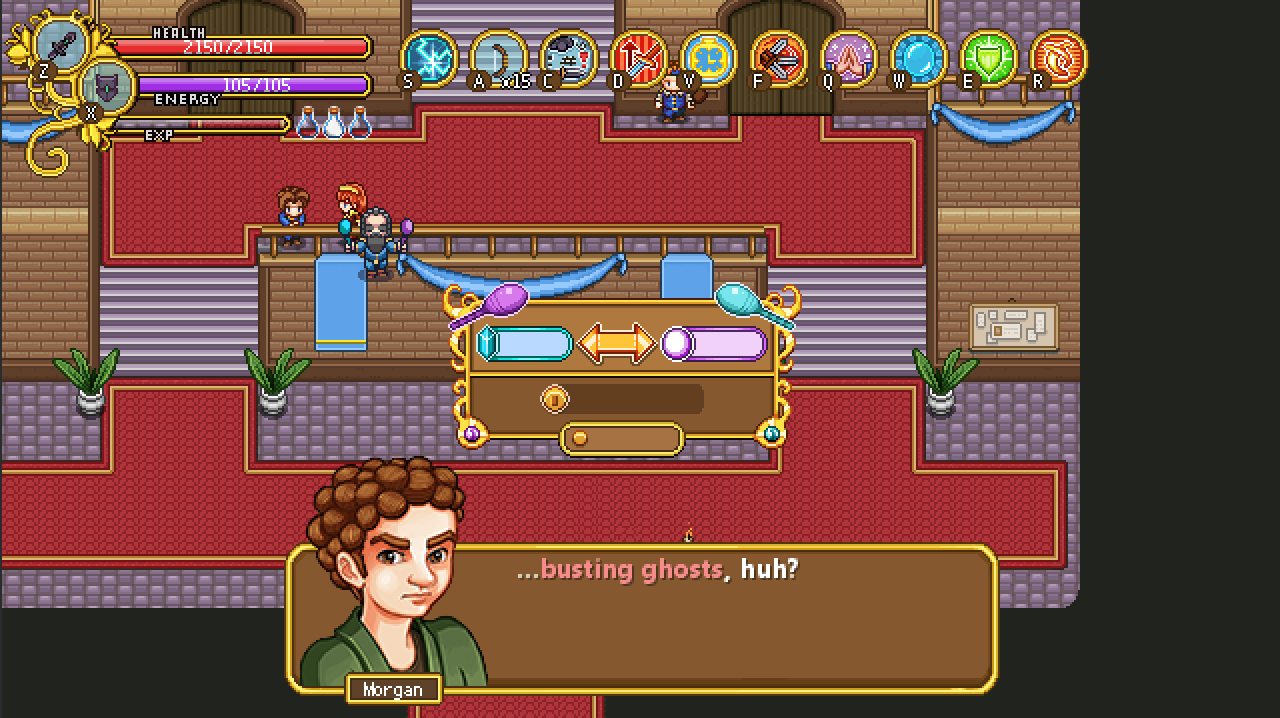 And now, some mixed stuff, starting with some improvements on the readability of the shop title splash I just showed:

An open door in the HQ leading into said transmutation room: 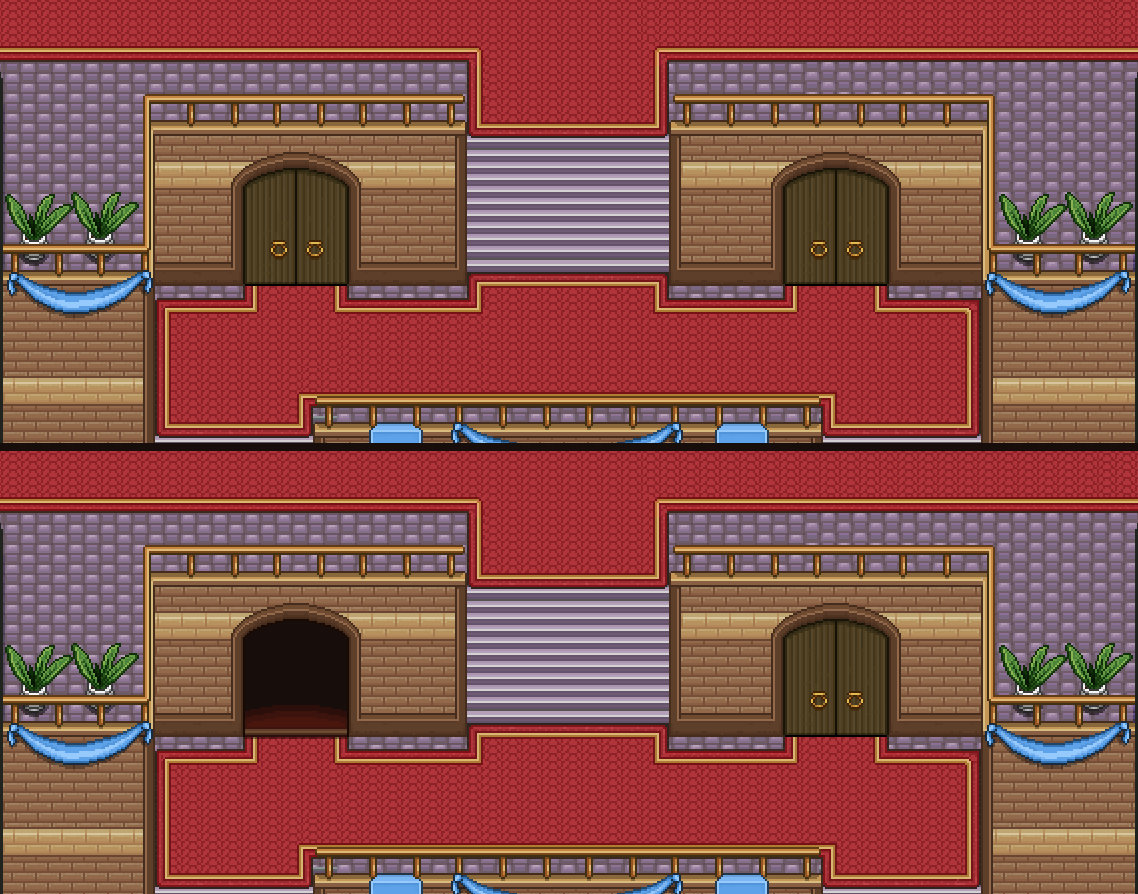 And some of our progress on a different part of the game, namely the Bishop’s battle! Here you can see some more of our iteration process, ranging from climbing the pillar itself to how the encounter with Bishop himself evolved from the placeholder version to what’s currently in the game! If you look closely, you’ll see that the background has changed slightly from the previous finished version I showed some time back: we’ve moved the bushes slightly out of the way to make sure they don’t distract from the battle:

Next, back to story mode, as we’ve been working on a redesign for the trophies menu! As mentioned before, we’re gonna change the trophies themselves around a bit as well, and in doing so we’ll upgrade the whole look of this part of the menu to better match the other newer menus, basically by adding more and better graphics: 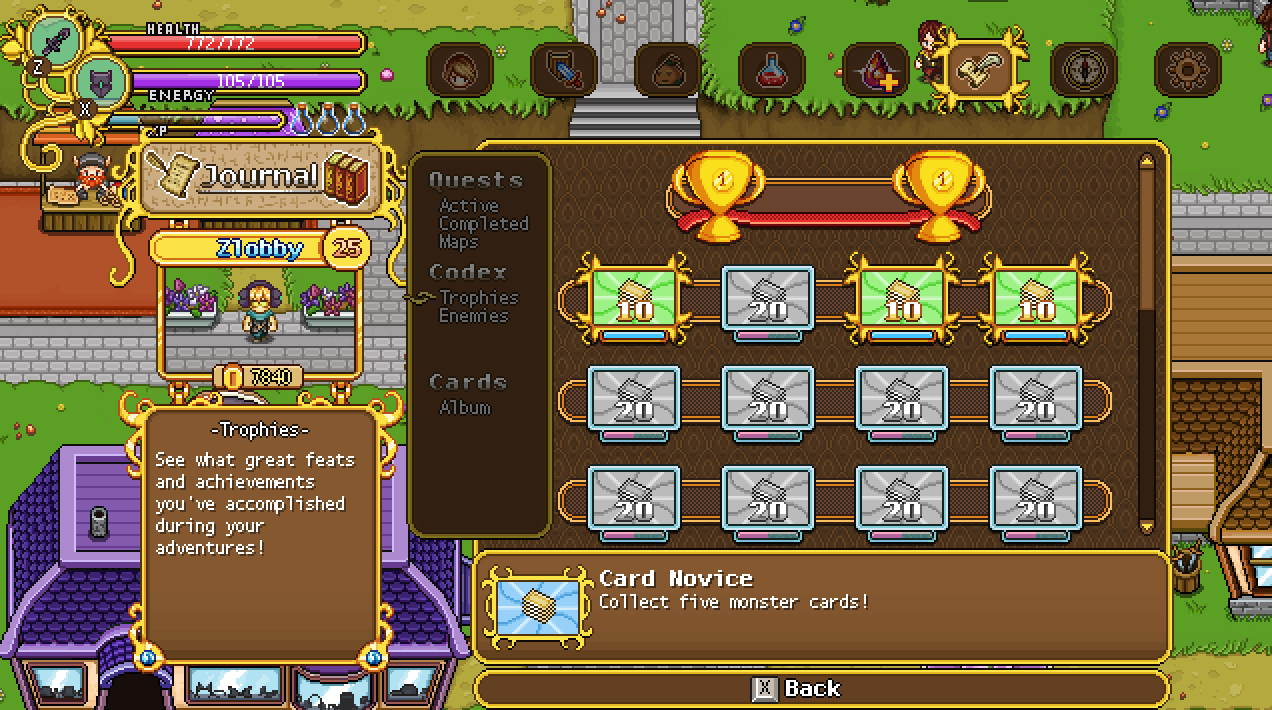 Finally we’re looking at a bunch of effects he’s been working on for the card cave, shown here as videos!

The first video shows our very first iteration of how the cavities in the wall light up depending on how many cards you’ve collected. The second video show what happens once you’ve collected all of the cards, revealing a secret catalyst, and in the third video we have adjusted the colour of the flames and added some bonus effects to when the cards merge together into the catalyst:

We’ve long been talking about revamping the challenges a bit, removing the long and slow paced ones and adding more quick and quirky challenges that you complete quickly, all with the intention of making them feel a bit more action packed. Now that we’re nearing completion of the upcoming story mode patch, it’s time to take a look at Arcade Mode, including these new challenge types!

To start off with, there will be two types of challenge rooms now – one where you’ll just solve strange challenges without risking any damage, and one for all the more dangerous challenges where you might accidentally take a hit – such as the kill in order challenge already implemented. Other ideas for these types of challenges include mini boss battles, kill quickly challenges, or take no damage challenges. Of course, due to the more dangerous nature of these challenges, it’ll be properly marked on the map so you know you’re risking your health if you enter – and also the reward will obviously be greater than in the ordinary challenge rooms!

For the regular challenge rooms meanwhile, we’re probably removing the bigger chicken challenges as well as fishing (but don’t quote me on that just yet). Some new ideas we have include:

A music challenge where you’ll have to mimic the order in which the musical faes from story mode play a song on a set of bells of your own.

And an animal taming challenge, where you’ll have to successfully tame a pet to get the reward!

…and we’re currently in the process of designing more! Do you have any cool challenge ideas you’d like to see in Arcade Mode? Let us know in the comments :)

Now, back to story mode for a little bit, as I make a bunch of adjustments to the Card Room in Mount Bloom, moving things around a bit and making more subtle frames for each of the cards: 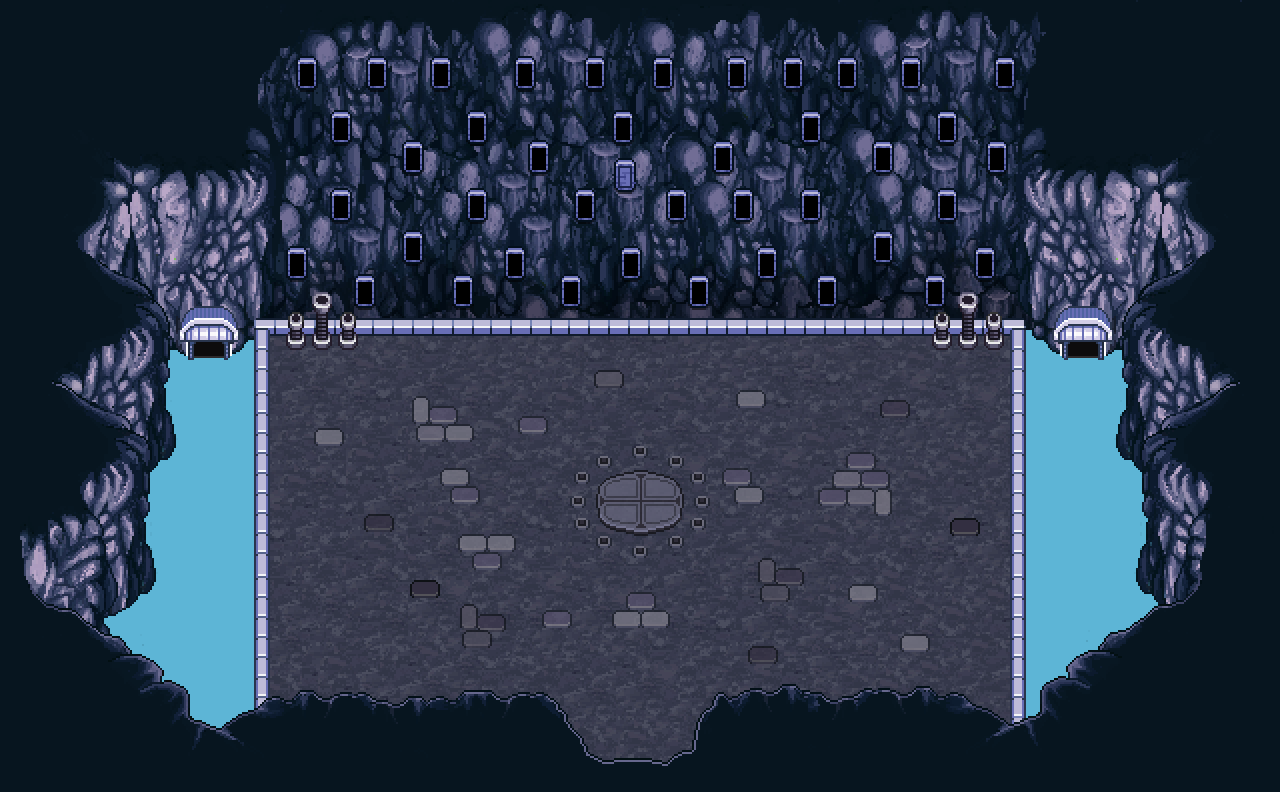 In the end, we opted for an even more subtle frame (but don’t worry, it should look fancy enough once you’ve found some cards): 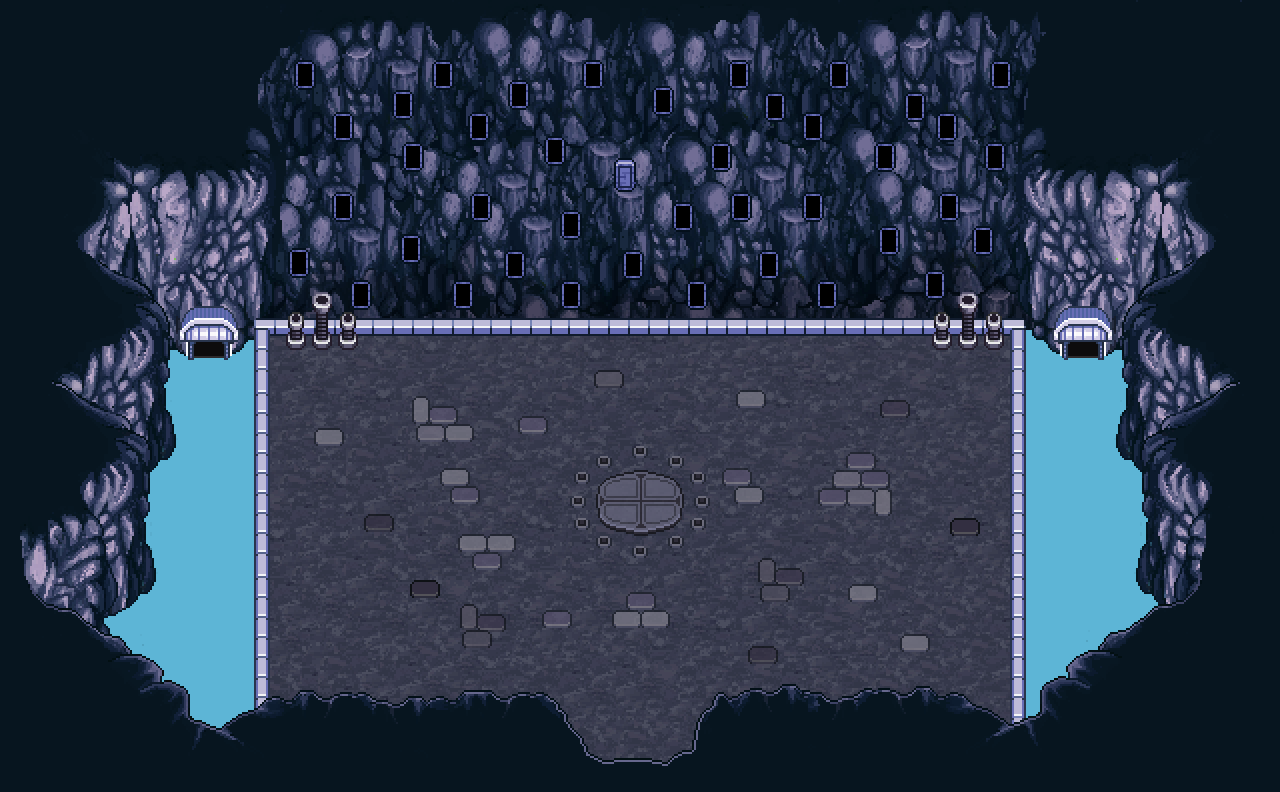 Now, back to Arcade Mode and its floating isle final room! In this next part I make a proper stand for the chest you’ll get for reaching this far: 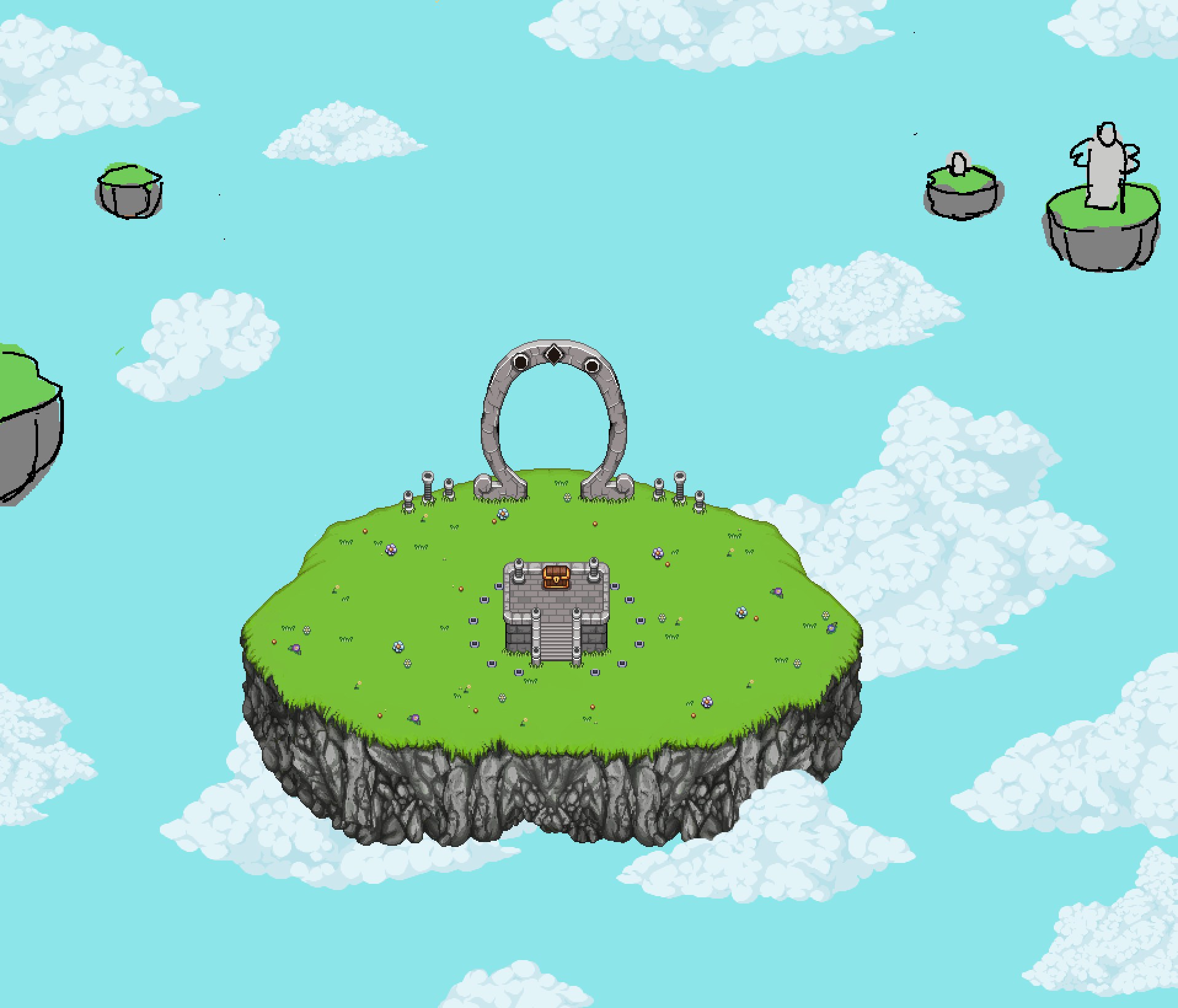 And finally, the other floating isles in the distance: 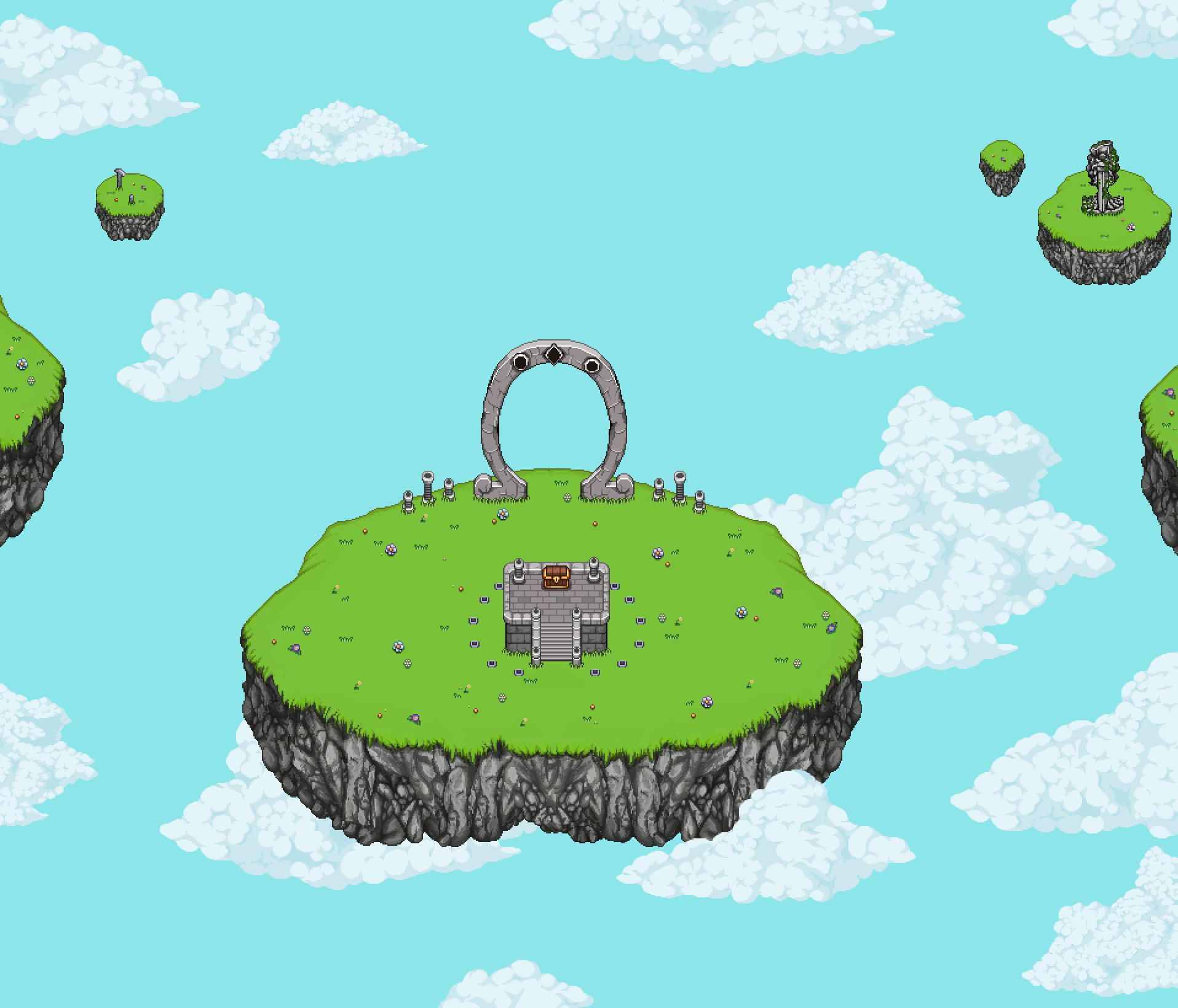 Meanwhile, Fred’s been hard at work finishing up all of the animation sketches for Bishop and a couple new ones (including the one below where he brushes off some dust after you’ve successfully defeated him):

He’s also been working on a bunch of light effects for the Mount Bloom card room which we hope to show you within the upcoming couple weeks! Stay tuned for that… :)

New week, new improvements! We wanted to make the Bishop boss portrait look a bit more creepy, so I did a bit of an paintover to adjust just that: 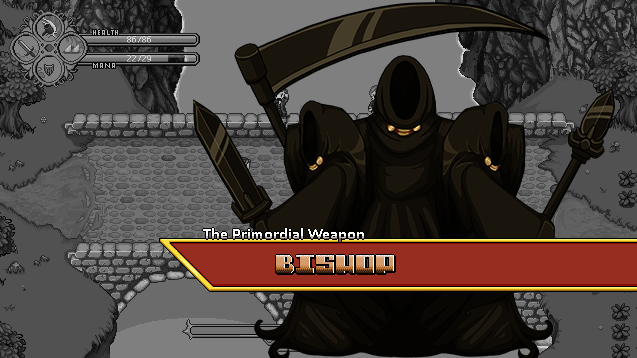 We’ve also made some additions around the card room, adding frames for each card to the wall, as well a a proper entrance (bye bye dragon floor and puzzle stuff): 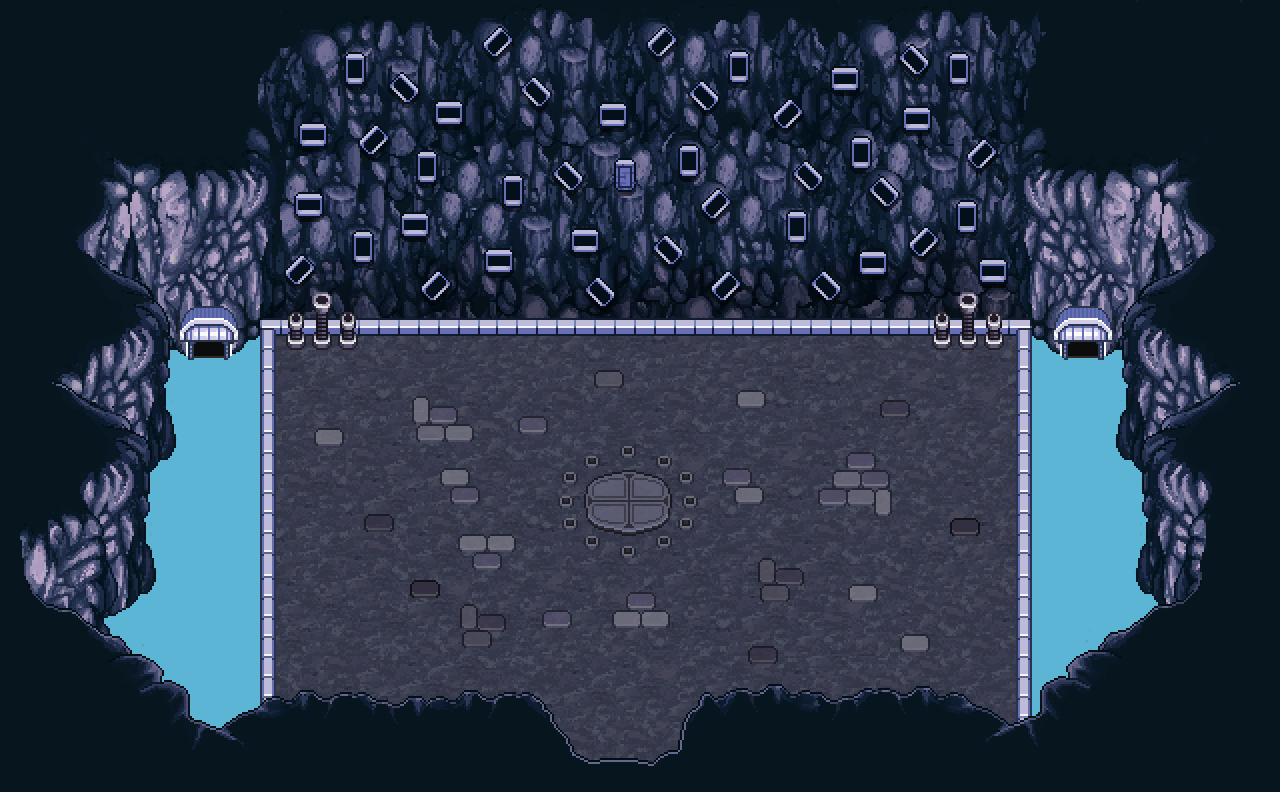 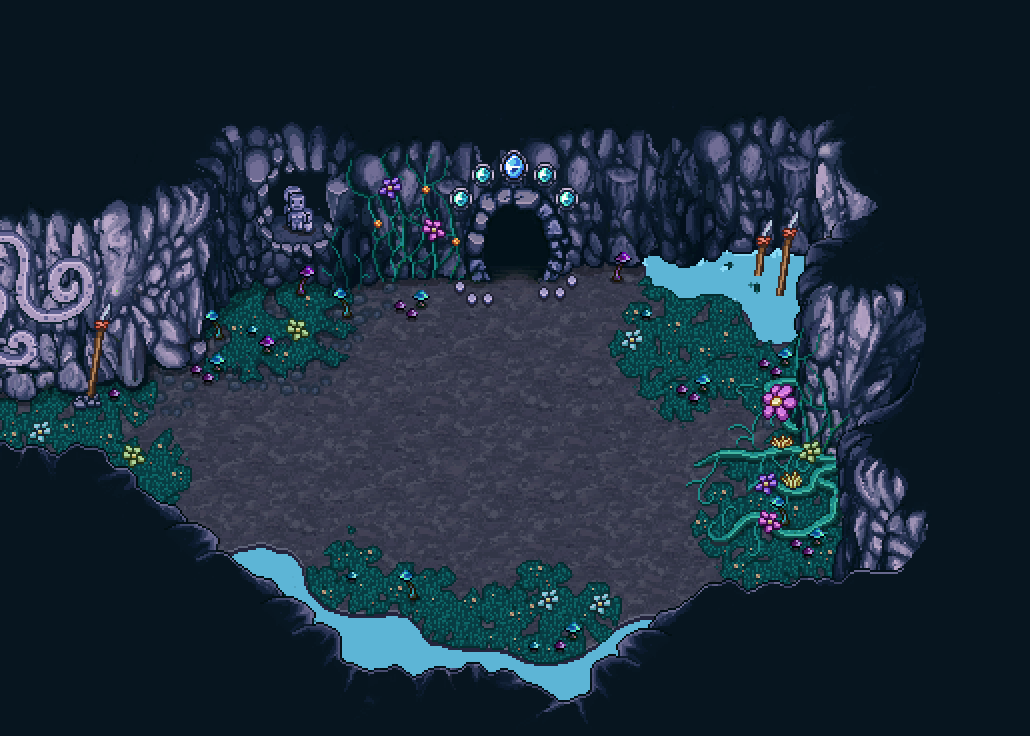 With us finally deciding the visuals for the floating isle that will be the final Arcade Mode room, it was high time to add that and Arcadia itself to the world map (proper layout of the isles yet to be decided):

And speaking of the floating isle in question, I’ve started working on that as well! Here’s as far as I’ve gotten as of yet, more work to come: 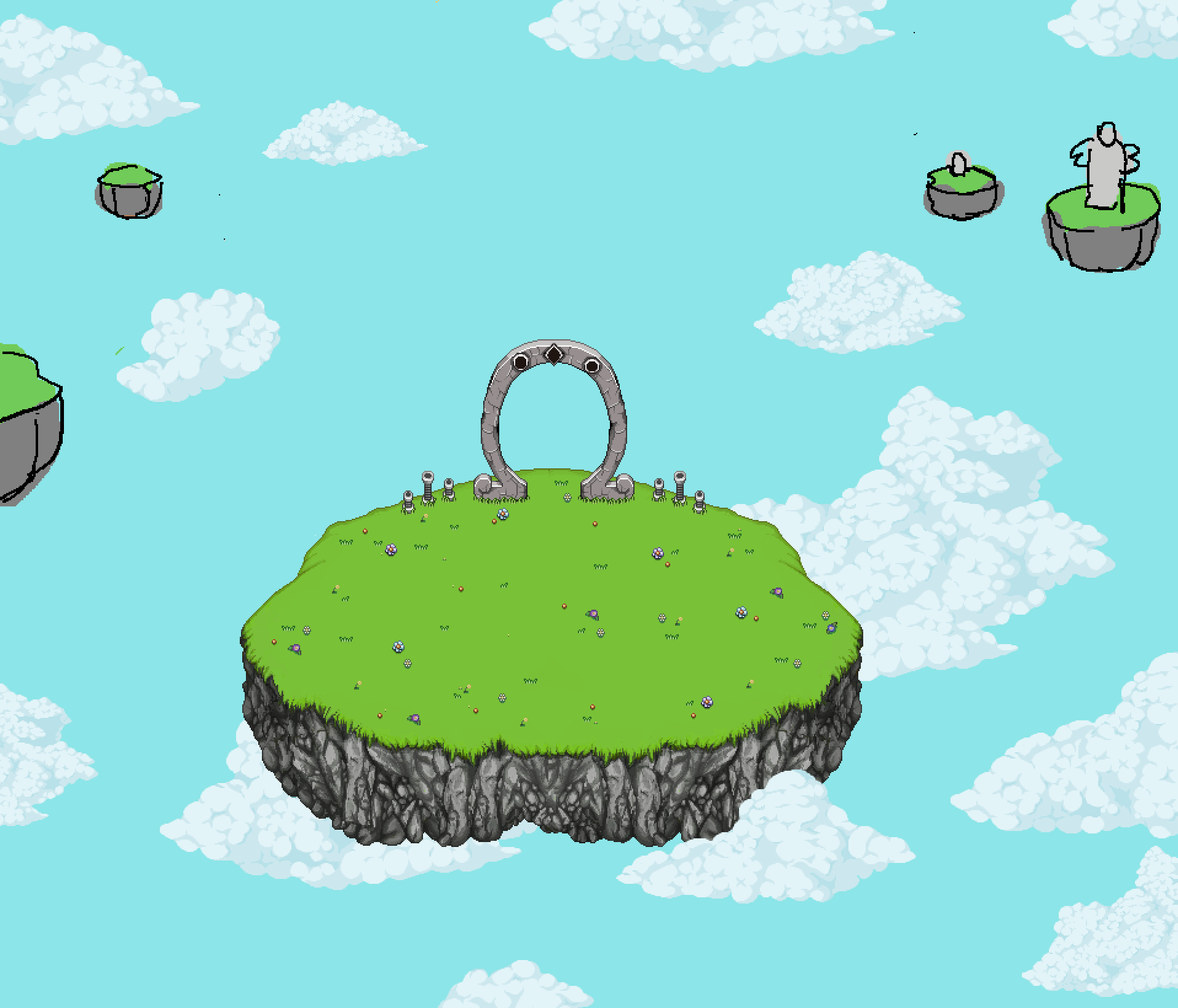 Finally, Fred makes some progress with cleaning up the Bishop’s animations (have a little sneak peek), as well as adding some light effects to the cards in the card cave, which will illustrate how many cards you’ve collected thus far:

A new week comes along with a new room in the HQ! This room is where the Silver Point to Talent Orb transmuter will hang out with his apprentice Bokus: 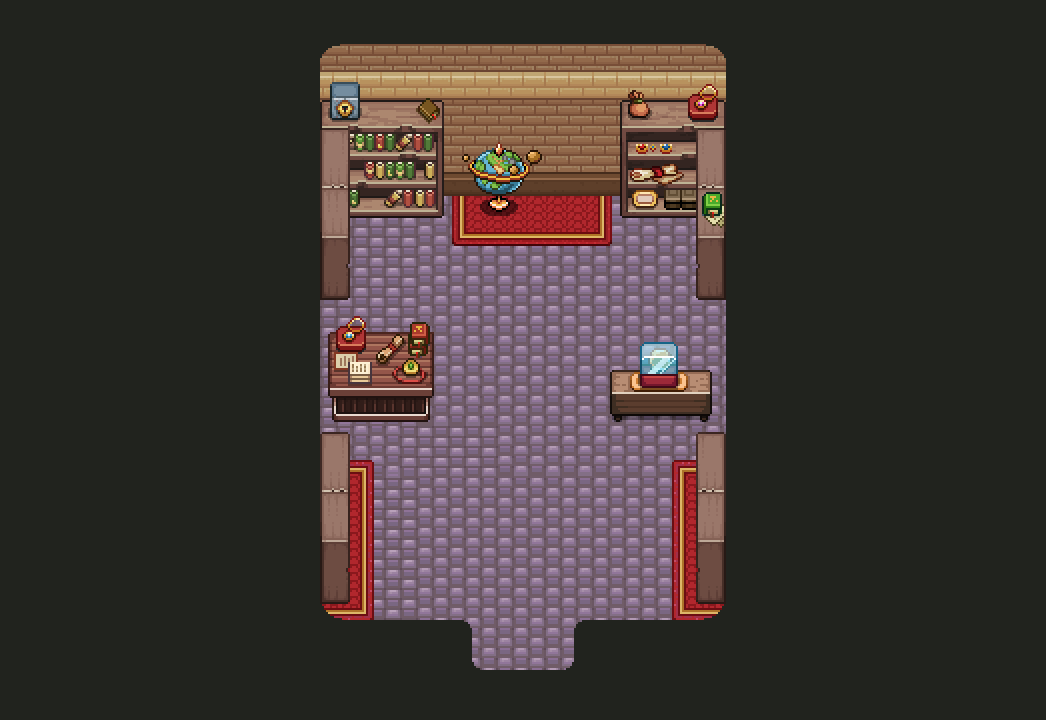 Next, it’s time to start working on Bishop’s boss portrait, here divided into two parts, starting off with the first Bishop: 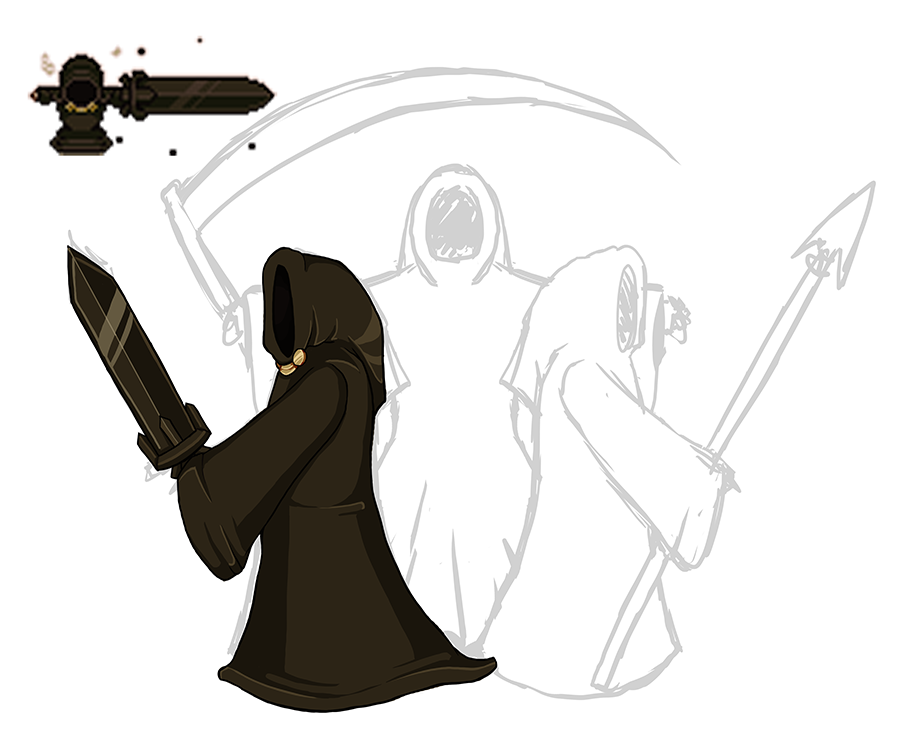 After that, we swap him around and add a different weapon, after which we add the third Bishop, the scary guy with the scythe: 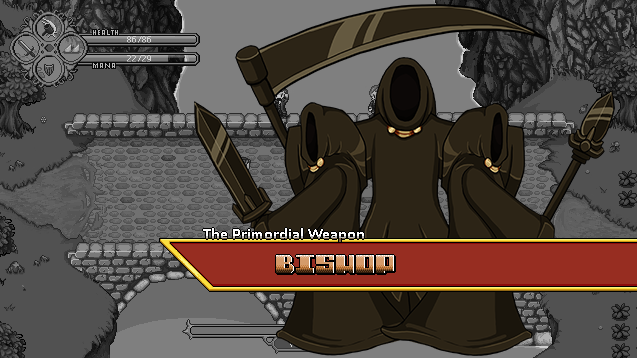 Back to the new HQ room, we had some talks about it and decided to make it smaller and a bit more messy, adding a pile of books for Bokus to sit on as well: 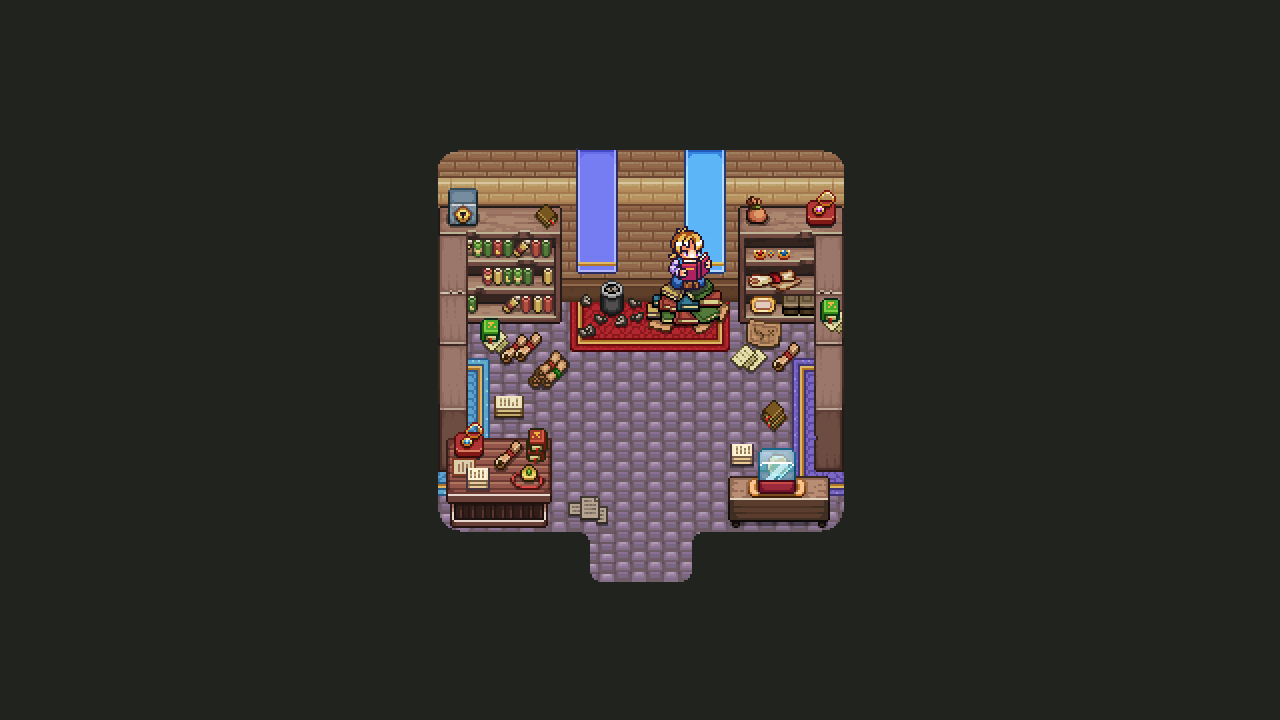 Fred, meanwhile, has continued work on Bishop, and so here we have him giving you a catalyst in a rather interesting new way: 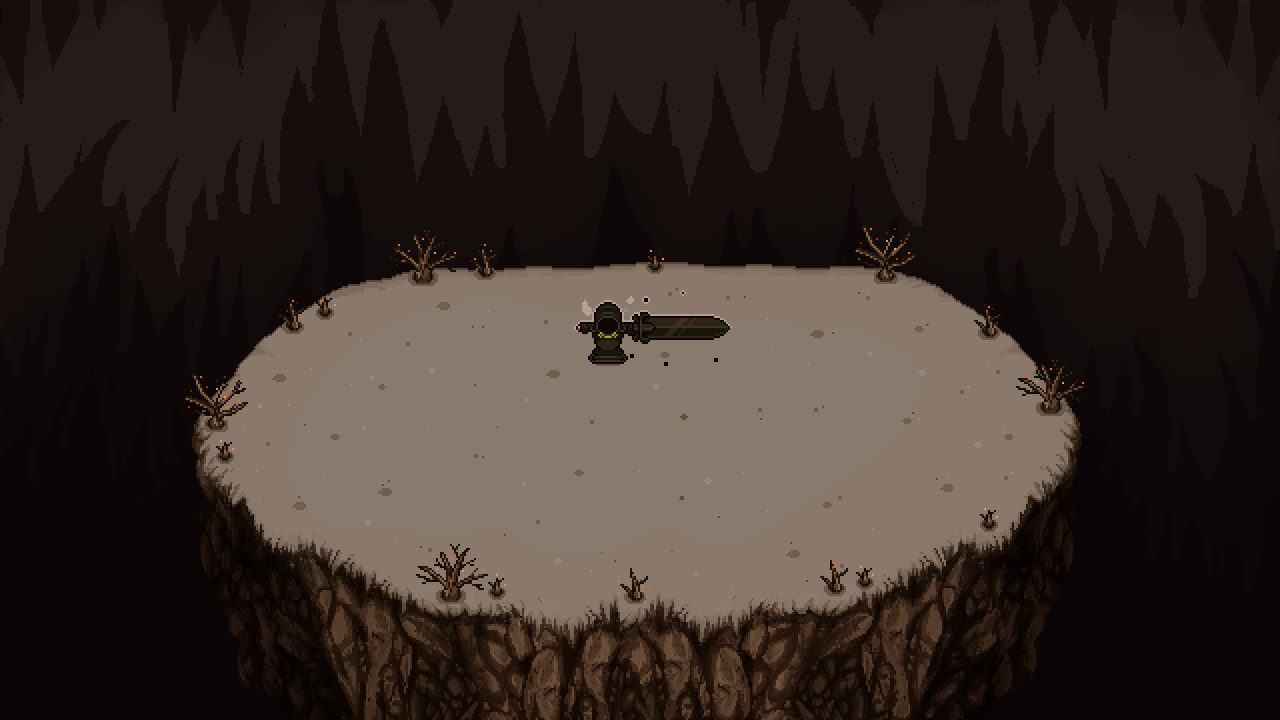 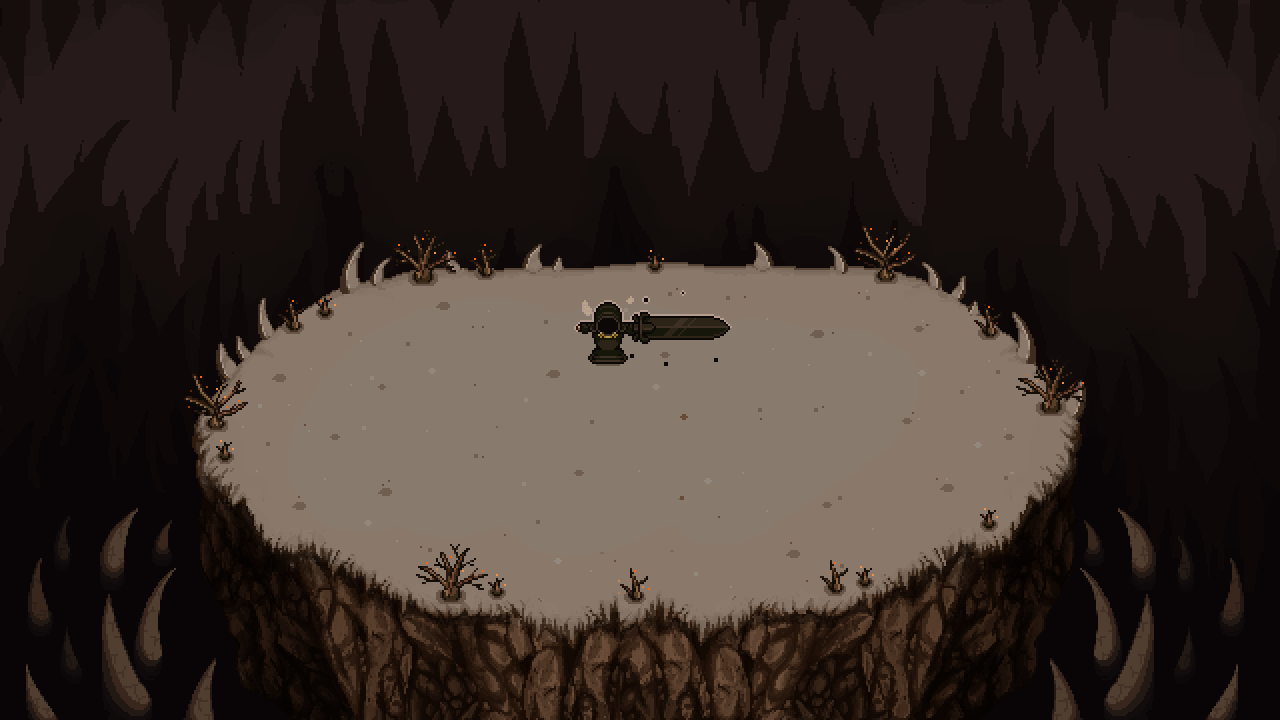 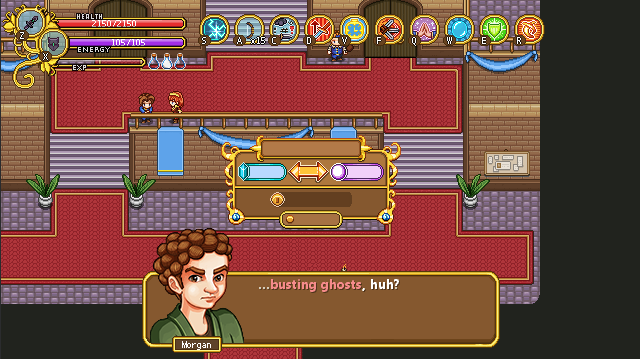 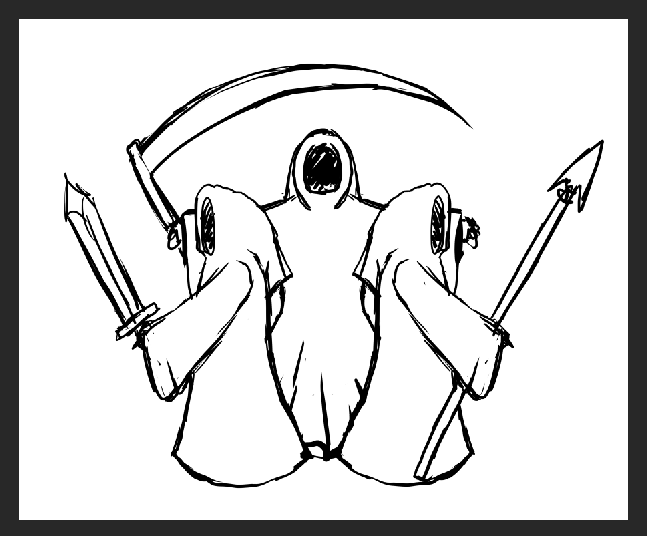