This week we’ll keep the post short! Fred is still away (he’ll be back later this week), so no animations yet. We do have a bunch of portraits though:

There’s still 30 portraits awaiting a remake, but that’s actually less than half! Phew!

Teddy is still fine-tuning the Toy Factory cutscenes, but once Fred is back it’s time for the final testing and polishing stage! If everything runs smoothly we just need a couple of additional animations from Fred before we can (finally) patch the factory into the beta for you to test.

Our next step will be to start sketching the layout and puzzles of the second temple. Stay tuned~

This post is a day late, because somehow we managed to forget that it was Monday yesterday and just kept working like it was any other day of the week… Gotta blame the crazy heat wave that’s been going on here, we Swedes can’t handle degrees over 25°C without going insane! ;)

Anyway! More Toy Factory this week. Most of it has been fleshed out by now – all that remains is polish and the boss fight, which Teddy is currently working on. Here’s a glimpse of another of the rooms, this one having a larger conveyor belt that provides a different type of obstacle for the player:

Vilya has been busy making additional expressions for some of the characters that will appear in the cutscenes, but she’s also had time to remake a bunch of old portraits to better suit the new style:

Fred is currently having well-earned summer vacation with his family and friends, so there will probably be an absence of animations to show off these coming weeks. We hope he has a great time and enjoys his time off instead (the weather sure couldn’t be better)!

Even though this last week seemed to be the hottest in the history of Sweden, we have kept our sweat drenched focus on the Winterland. A while back we posted this out-of-control Christmas Gift Machine which was supposed to act as the boss of the Toy Factory.

This design was from the time when the Toy Factory was supposed to be a smaller side quest with only a simple boss encounter within it. Back then the idea was that it would work very similar to the Sentry encounter in the Flying Fortress. A very simple “kill the boss while it spawns a ton of enemies attacking you”-encounter.

Since the area itself have gone through such massive changes since we came up with the initial gameplay design for the boss, we had to rethink it a bit to make it up to standard with the rest of the area.

We all still liked the concept of having an Enraged Gift Machine as the boss of the area so we stuck to it. We only made more of it!

As the animation hints about, the trains from last week will play a part in the boss battle. It will play out more as a combat/puzzle-hybrid compared to other bosses so far and it will hopefully keep things fresh and interesting for you players!

This week we’ve focused on completing the prototyping of the entire Toy Factory, as well as applying some polish to its first half. For posterity, we’ve saved all the different development stages of a challenge room, to show you what prototype iteration can look like! 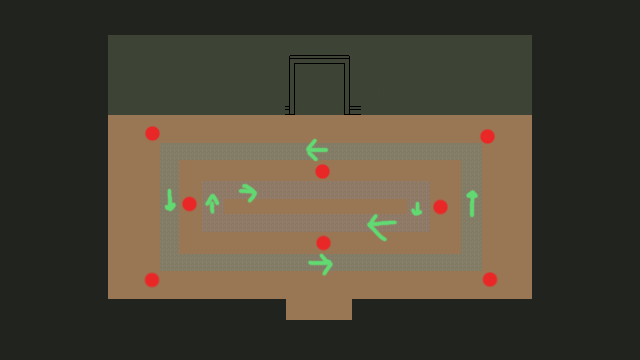 This was our first iteration. It’s pretty hard to see what’s going on since it’s all place holder graphics, but the idea was to have conveyor belts going in circles through the room (the fields with arrows), and the red dots were things you had to strike with your weapon when they appeared.

The challenge was designed so that you needed to use the speed boost from the conveyor belts to quickly move around the room in order to hit the different targets before they disappeared.

We implemented a prototype of the challenge, but quickly realized that it wasn’t up to par. The challenge was there, but it didn’t feel good. Sometimes, that last part is just lack of polish, but this time we felt it went beyond that. We decided to scrap it entirely. 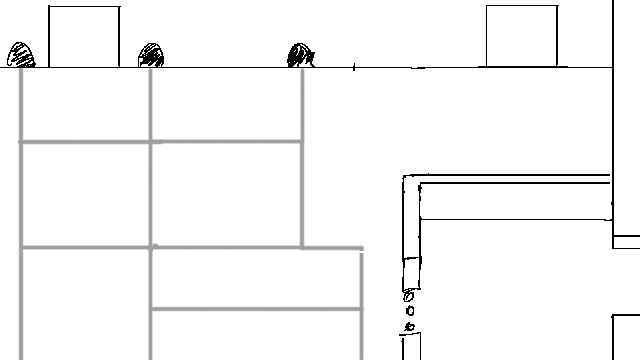 Back at the drawing board, we decided to experiment with a mechanic that was intended for the Toy Factory boss, namely toy trains. This idea was, in short, to have trains go around a track to provide dynamic area denial while having the players face a second challenge, which originally was going to be fighting enemies.

After brainstorming a bit, we decided against the enemies since it would be too similar to other encounters in the mini-dungeon, and instead came up with the idea of piling on a second type of area denial: falling bombs. For this, we moved things around a bit and came up with this layout: 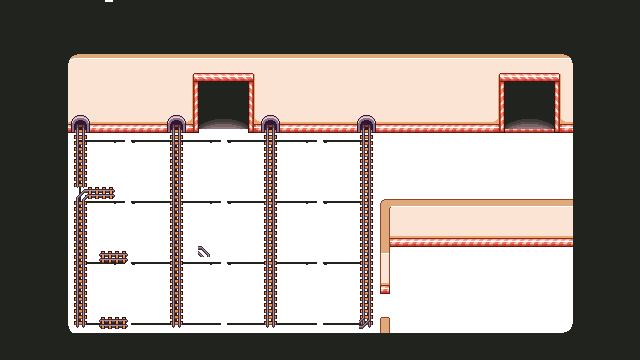 The playfield was divided into nine squares (term used loosely here). Bombs would fall inside randomly chosen squares, between which trains would zoom by on the rails. The challenge was to move between the squares, while simultaneously dodging trains. Each train crossing had a track switch, which changed at regular intervals, causing the train patterns to constantly differ.

Using the map above, we implemented a prototype of the trains themselves, as well as their switching. This time, it felt interesting right off the bat, and we decided to go forward with this idea and continue iterating. 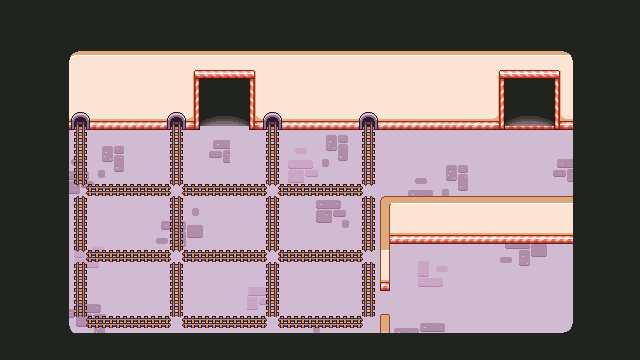 This is how the background looked after cleaning things up and measuring distances. At this point, we added the falling bombs to the prototype.

It felt pretty good, but oftentimes the trains would be too chaotic for player effort to actually be rewarded. You’d feel you had a good read on the situation, but then a switch changed and suddenly a train could still blindside you as you moved between the squares.

We decided that by making the pattern consistent, we could improve clarity and decrease frustration while still maintaining what made the challenge interesting. 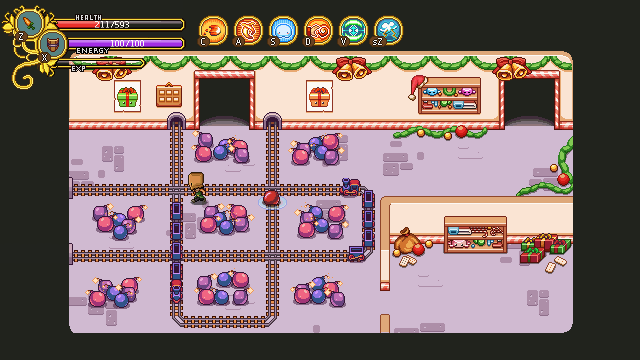 In the end, this was the prototype we went for. The image above links to an animated GIF, so be sure to click on it! Note that this is still the prototype; there’s a whole bunch of polish left, as you can see, but the core gameplay is there.

This little story is a good example of how gameplay can (and will) change as you go along, and that you should never expect your initial idea to be perfect as-is.

It also conveys the issue of hidden/surprise development time – one of the biggest reasons it’s so damn hard to estimate how long things will take on a macro level. This is why young companies (ourselves included) so often are very optimistic in the beginning regarding how long time a game will take to make.

You can look at some other game that took years to make and go “hey, I could make a game like that in six months” and you might be right, but then you never take into account all systems, sub-systems, prototypes, sprites, models, textures and lines of code that had to be made and thrown away in order for that final game to grow into existence.

Some closing food-for-thought: almost every game you’ve ever played has gone through this at almost every stage of development. Even amazing triple A games has looked terrible and been a clunky mess to play at some point!

The outside of the Toy Factory Vilya put together last week went through the animation station! You’ll have to imagine the smoke puffs coming out of the chimneys, we’ll add those in game later on.

It’s not only the outside that have been getting some animations up and running. The insides of the factory will be filled with moving parts and machinery. We’ve tried to keep the technology a bit more crude compared to the Flying Fortress-tech, to keep the two separate in terms of setting.

The Toy Factory will work as a middle stop before players can head into the second temple, much like the Ghost Hunt quest in the Pumpkin Woods.

Compared to other areas in the game so far, the Toy Factory will focus a lot on different environmental hazards, traps and other challenges instead of just pure combat encounters. It will not be the size of a full blown temple, but should keep players on their feet before they can venture into the next temple!

To sate the curiosity of all Rodney Hahoos out there, here are some updated sales stats:

An interesting thing to note here is that, even now, almost 20 % of those buying the game also get the pre-order hat! Our players know what’s important!

This figure was around 25 % at the start, and we thought it would go down significantly when our long time followers had shown their support, but the hats are still quite popular!