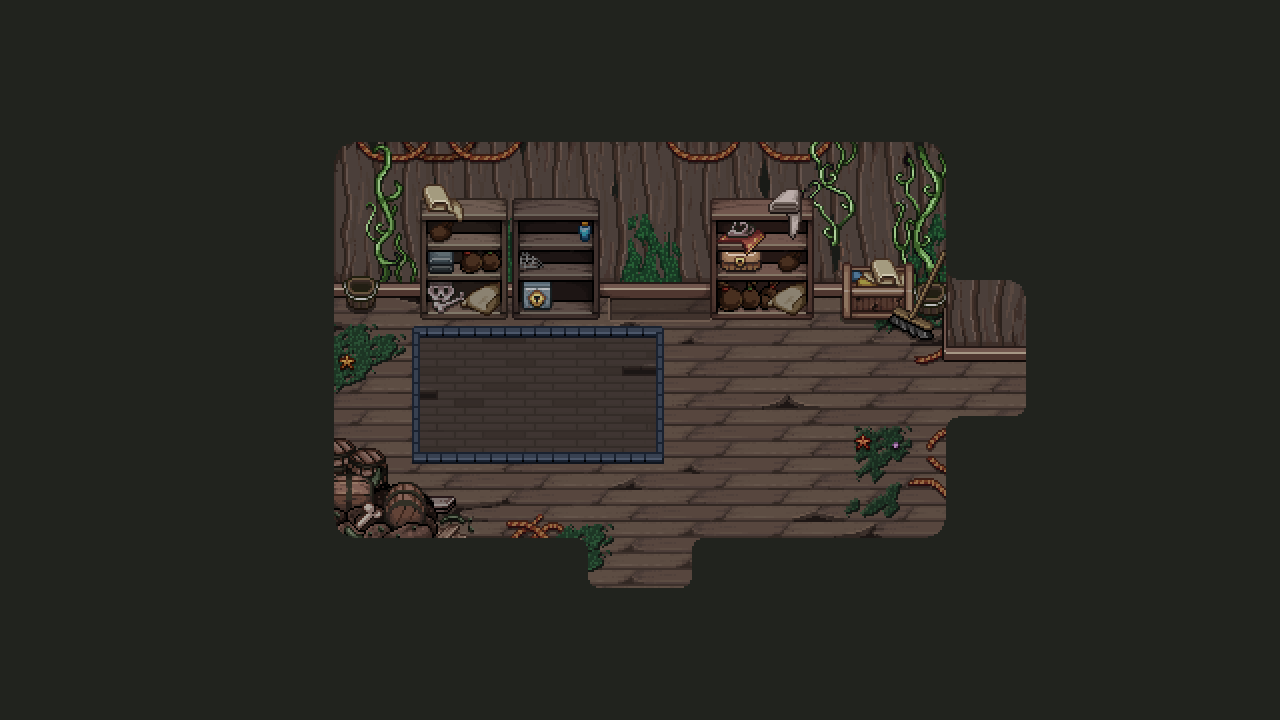 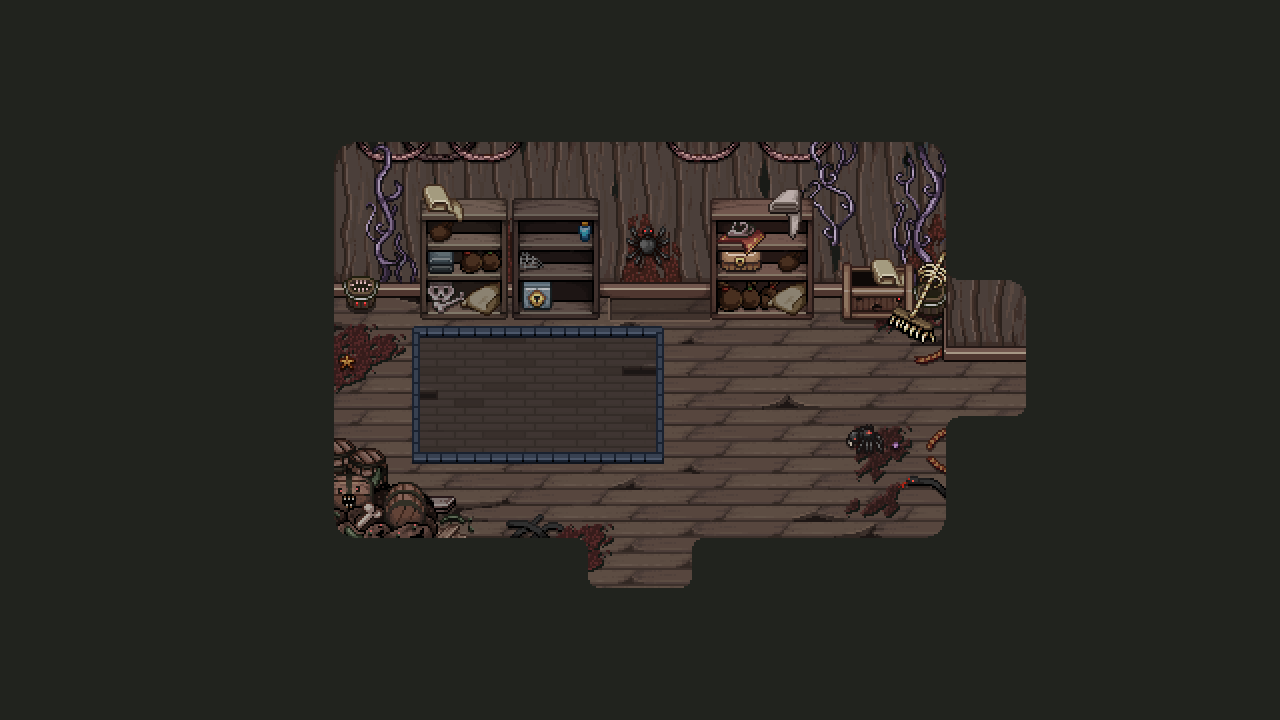 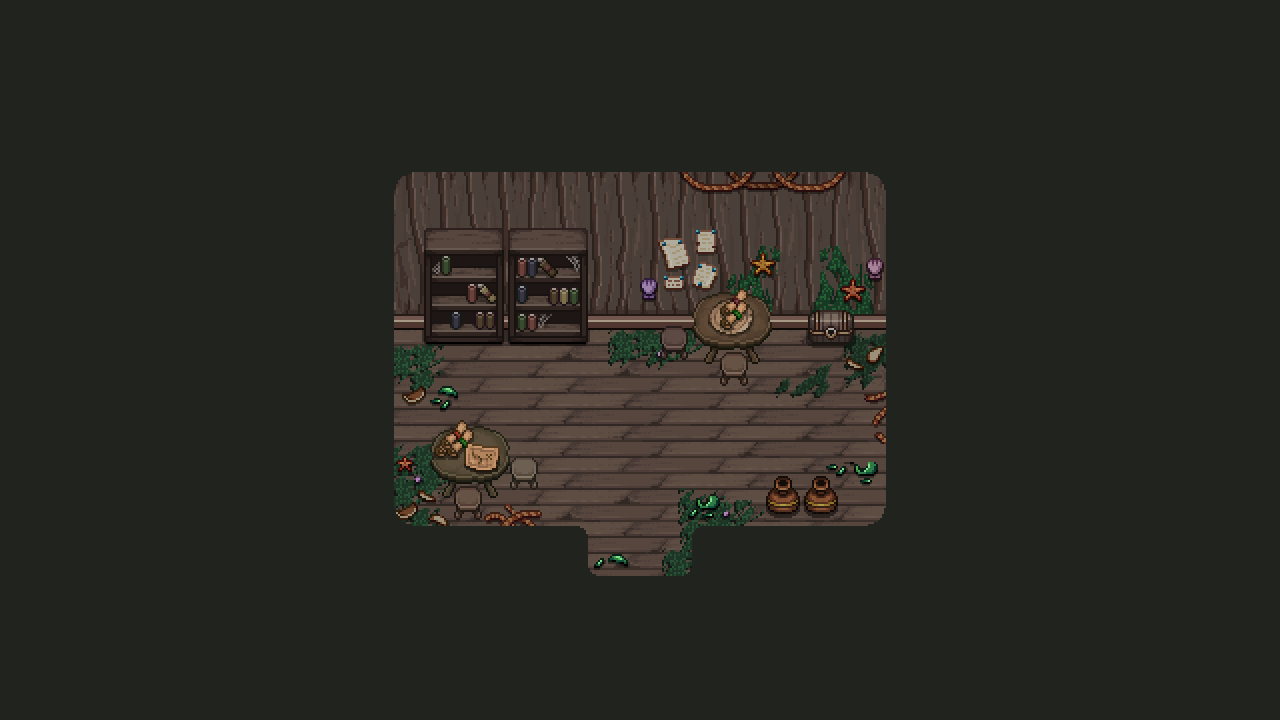 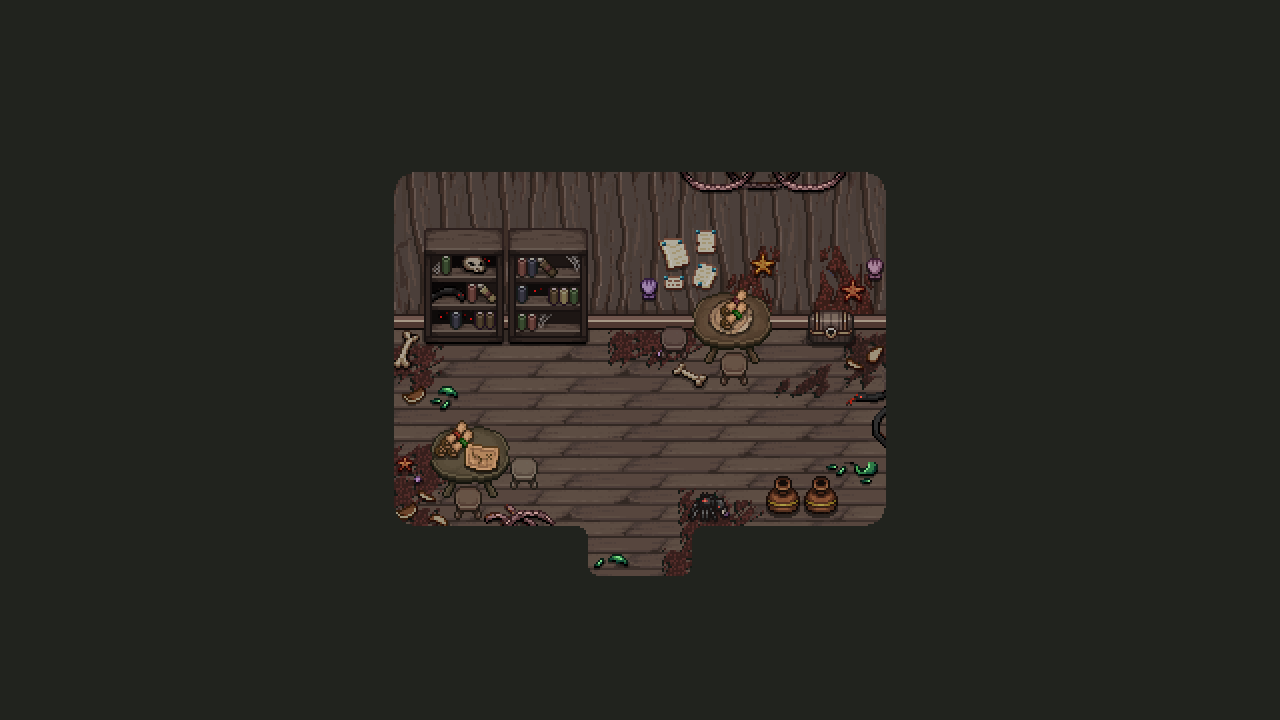 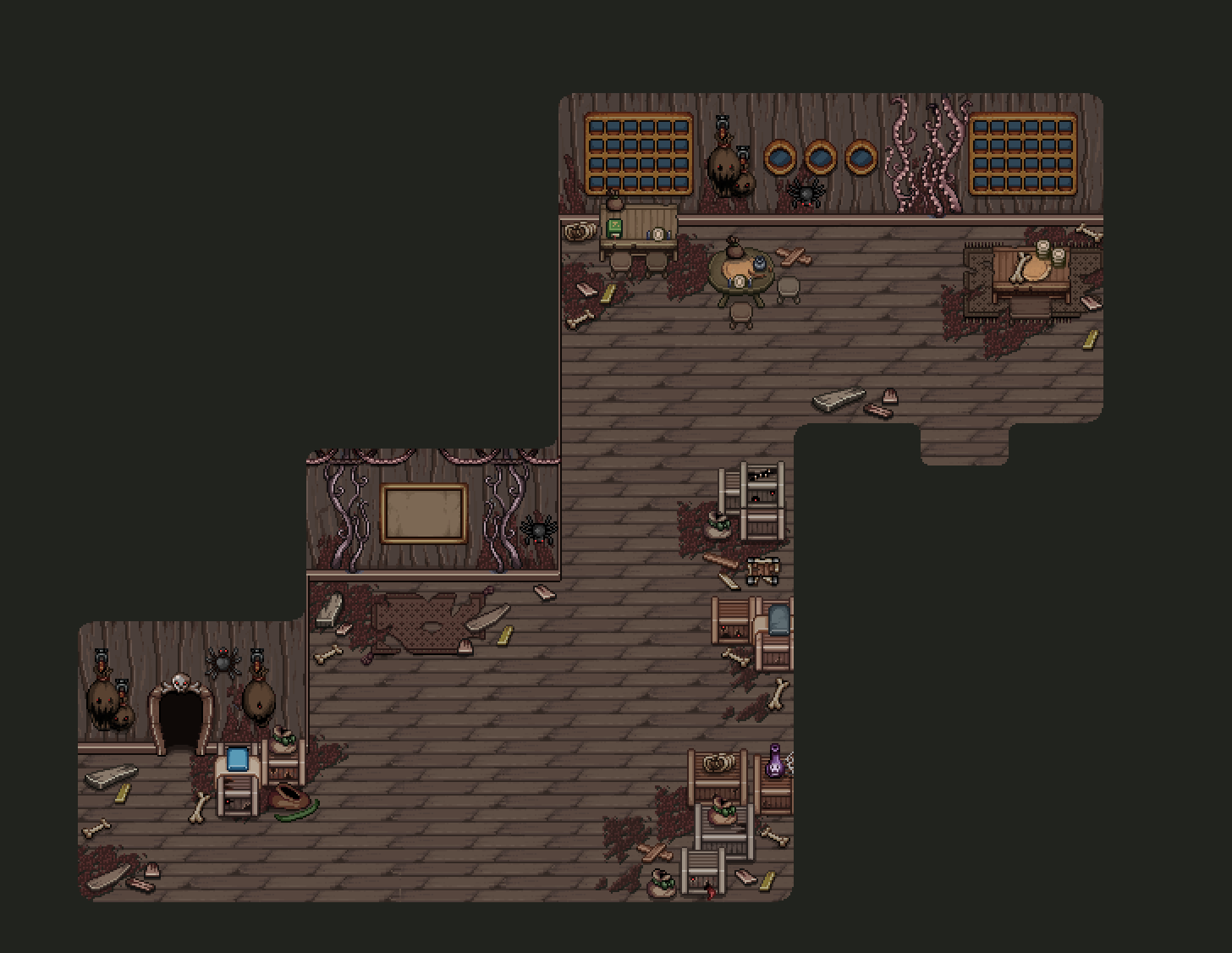 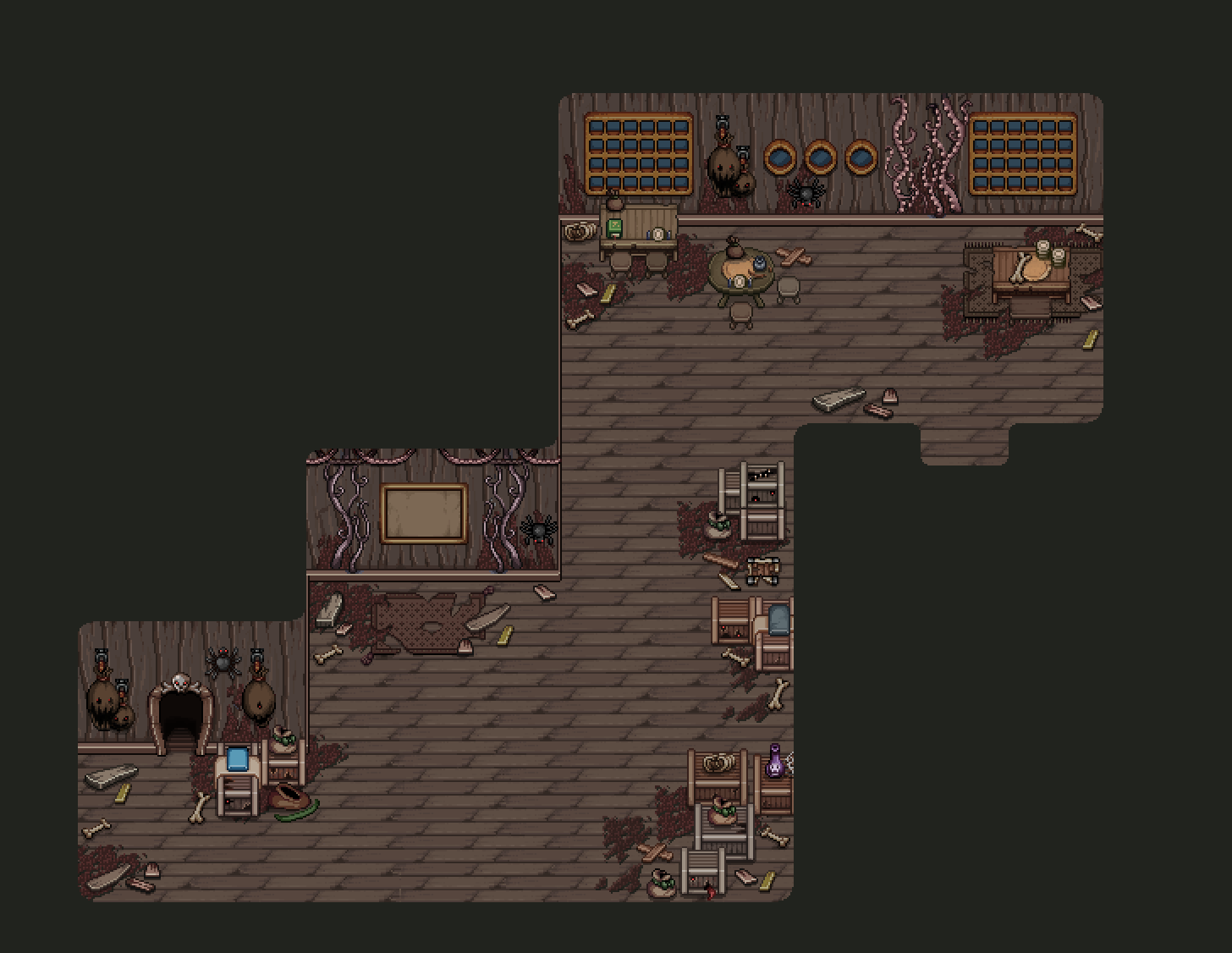 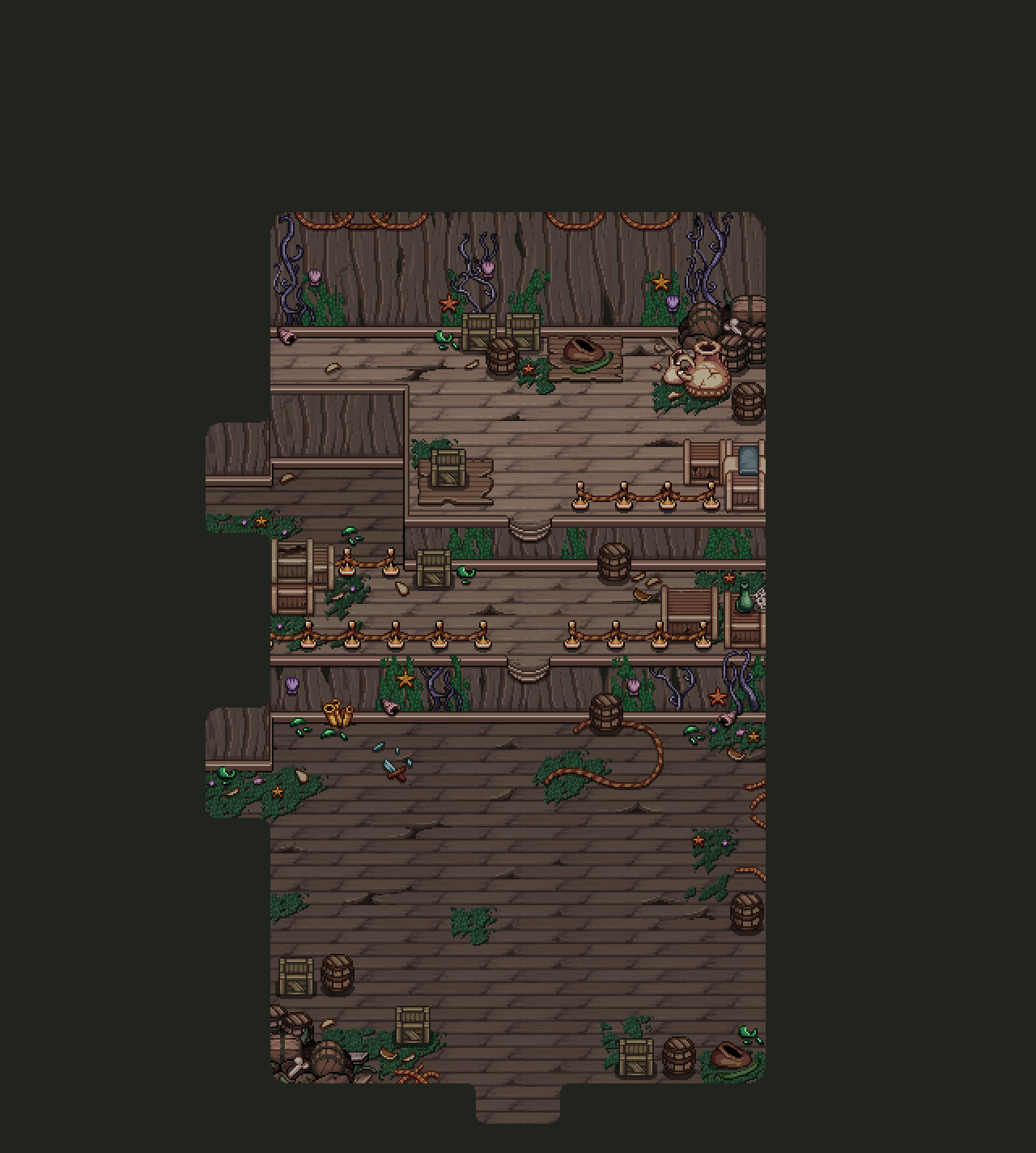 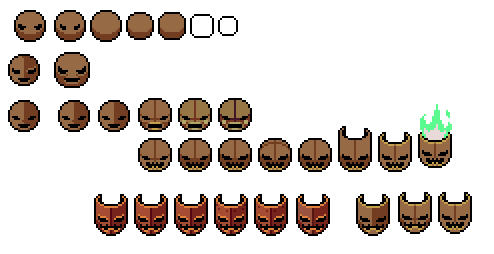 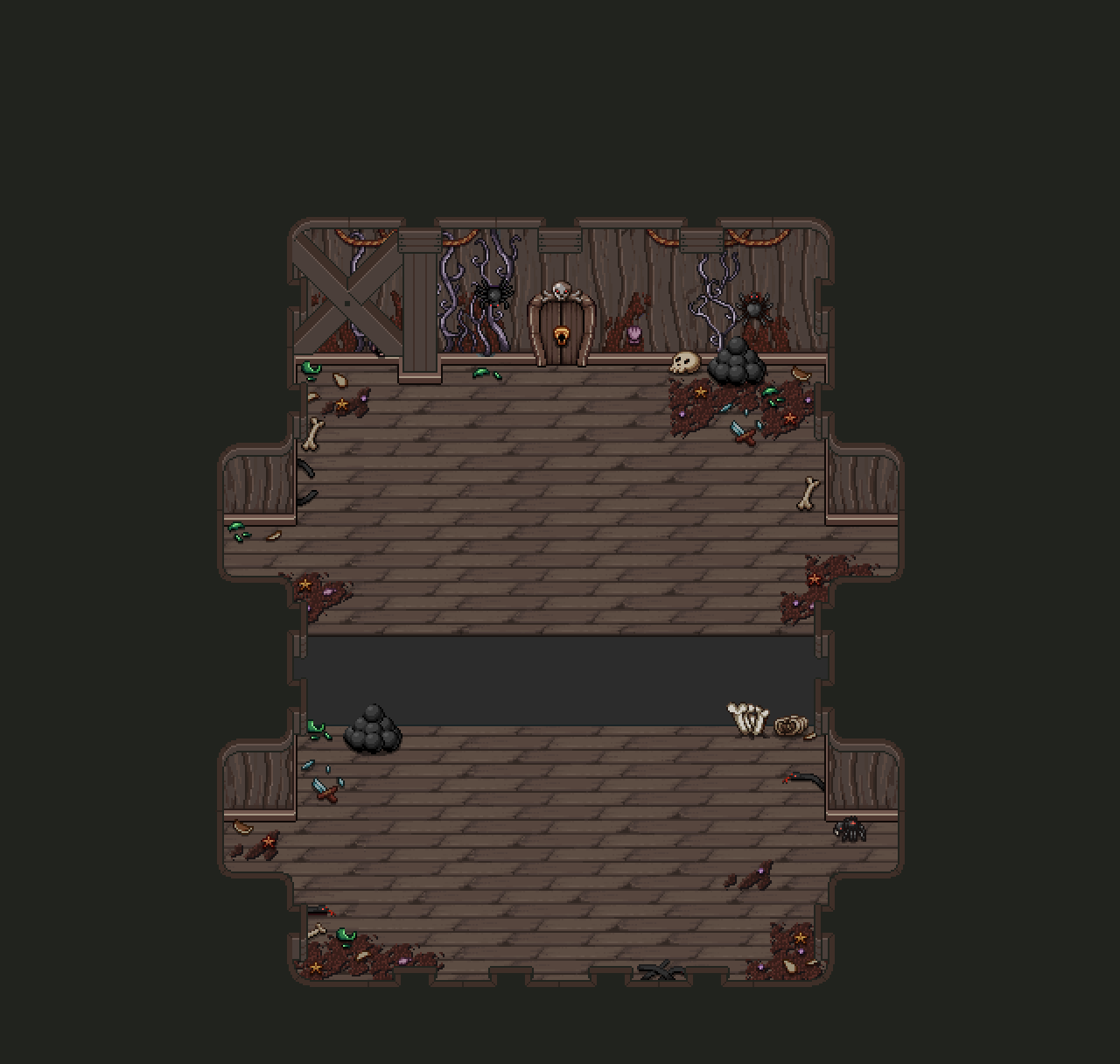 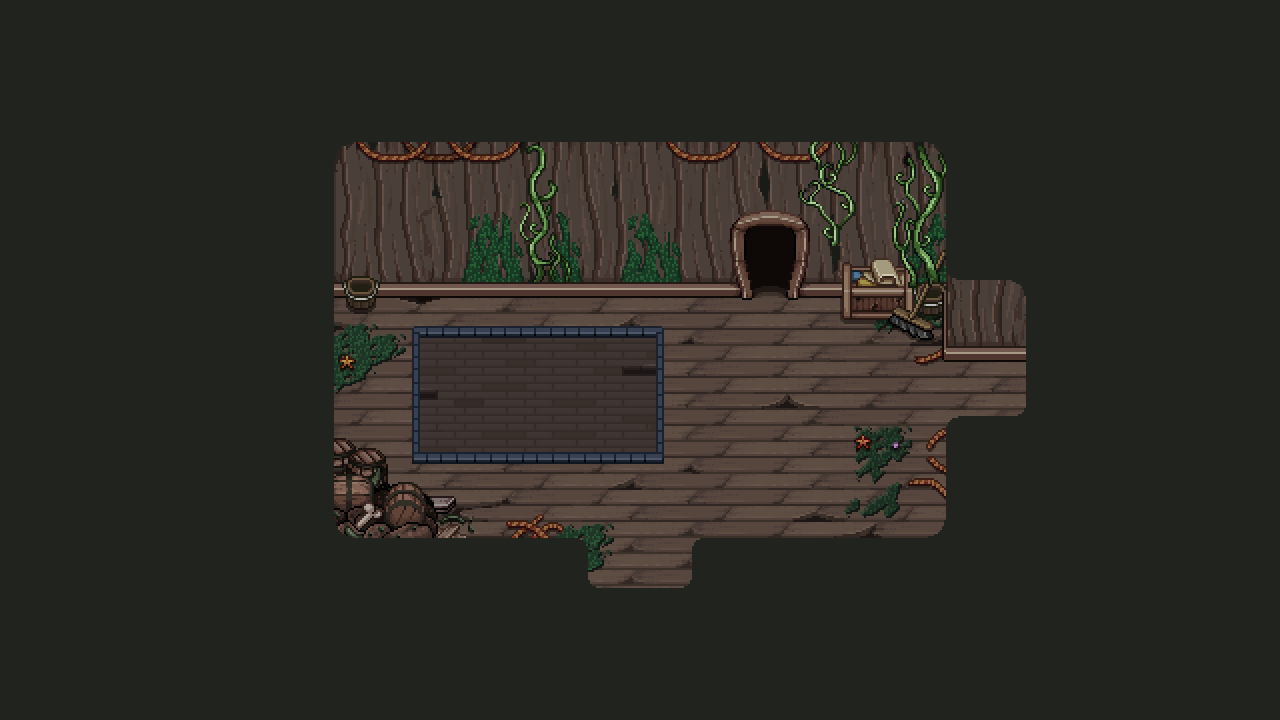 New week, and time to finish up the Mess hall by turning its regular version into a spirit world version!

As always, this involves changing the colors around a bit on the moss and such, but for this room it also involves a couple new props, including turning a couple of carrots into a sad and shrunken version of themselves as well as killing a flower in a vase:

The boss fight prototyping continues, and we’ve made a bunch of changes and additions! First of all, the actual background has been added, which gives the fight a slightly more serious feel, but we’ve also added the proper graphics for some attacks such as the water ball thing:

And we’ve also edited on of his skills slightly, namely the skulls he summons:

Previously these skulls were only visible in the spirit world, which meant you had to swap back into the regular world to avoid them. Now though, we’ve made sure some of the skulls are in the regular world as well, making avoiding them slightly harder!

We still want to improve this fight slightly, but now it’s more about patterns more than anything – we’re kind of happy with what he does, just not the timings for when and in what order. In this version of the prototype seen above, he tends to randomly summon things for you to avoid, but we have since then made him go into various phases instead, meaning he’ll have a period of simply attacking followed by a period of summoning things for you to avoid. The second part will then feature both the bullet hell elements as well as dodging his regular attacks at the same time .

I think we’re really making progress with this and hopefully the finalized boss fight will be done soon – it definitely feels a lot closer to it now, anyway!

Next, it’s time to go back to drawing those disgusting bridges! In the mess hall there needs to be a ton of them, so I better get a move on and make a bunch of variations for them. Here goes:

And here are the finished things: 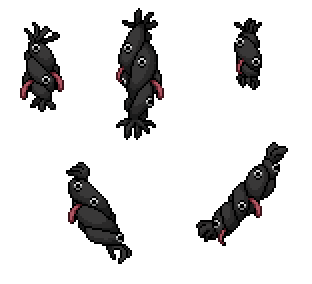 Next on our prototyping spree, we have another of the challenge rooms in the rather strange version of Startington! In this room, you’ll be facing obsession, and it takes the shape of you killing a whole lot of slimes, which then turn into… yourself?! What could it all mean?

Obviously this segment still needs a lot of work, but we’re getting there, and I think what we do in this part of the game is pretty cool even if it might not be super clear to everyone. Next up we’ll deal with the final(?) challenge, concerning ‘deceit’…

We’ll end this week with a look at a new room, though! This room is the final room of the second floor, so once this is done the whole 2nd floor can be put into the game, yay! 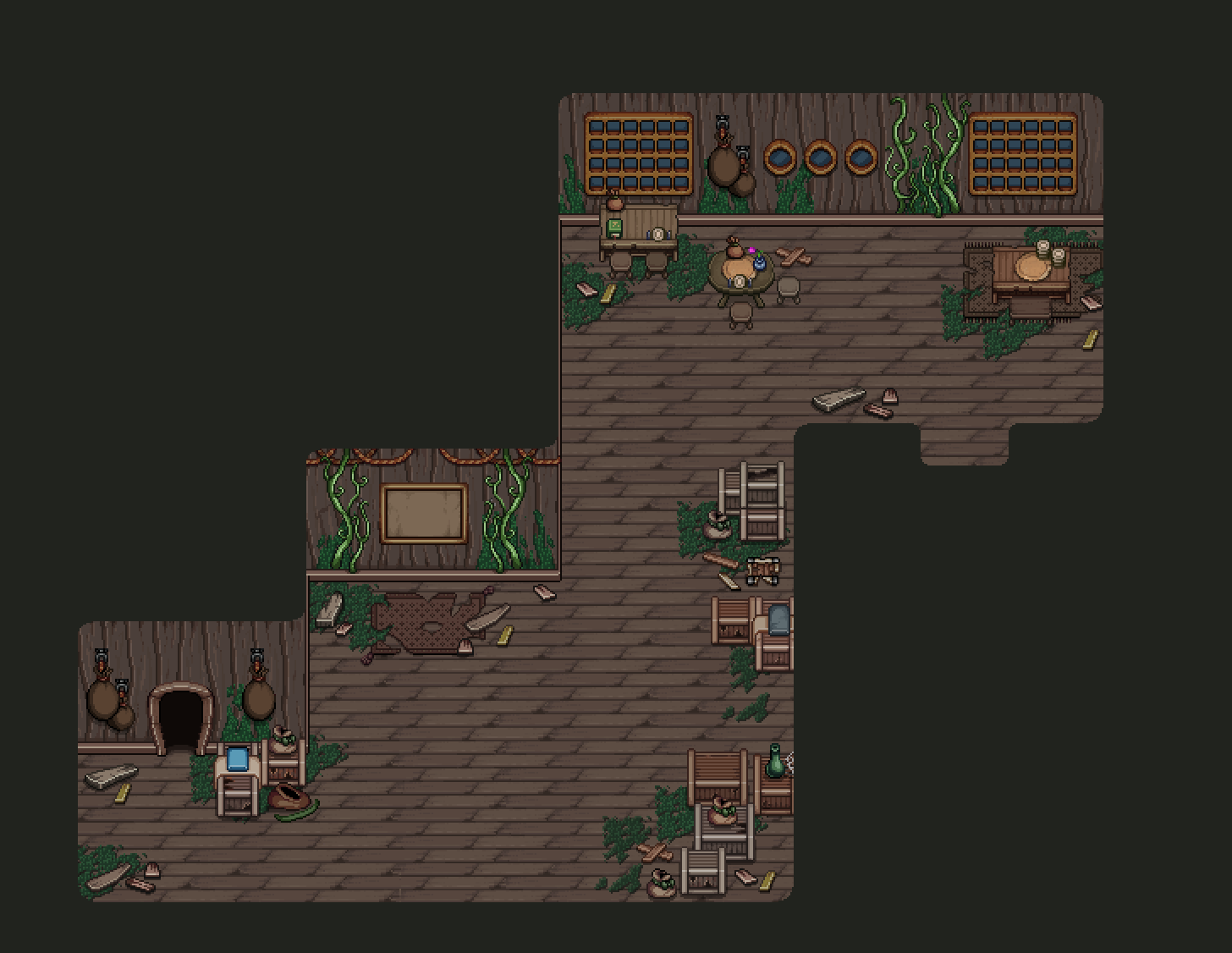 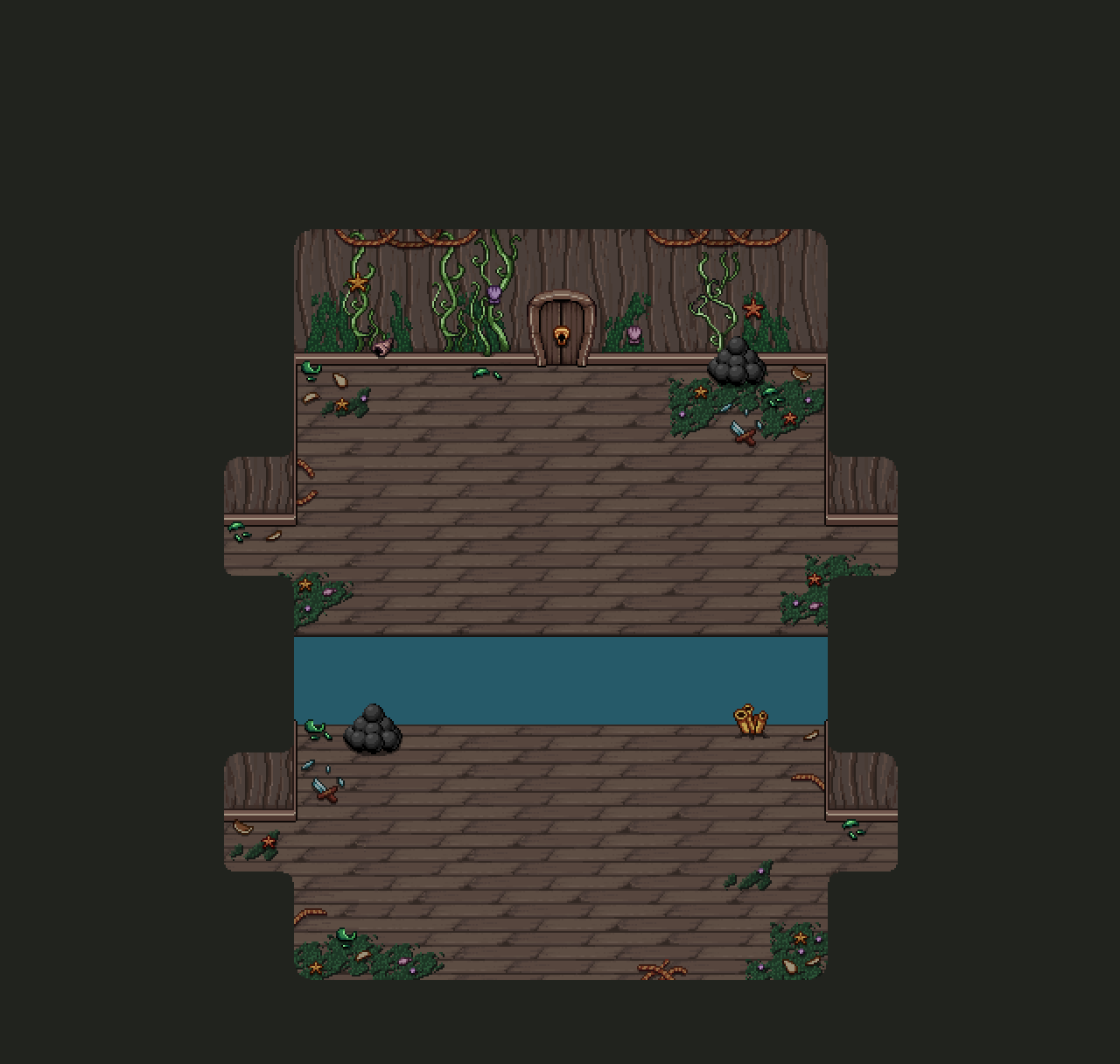 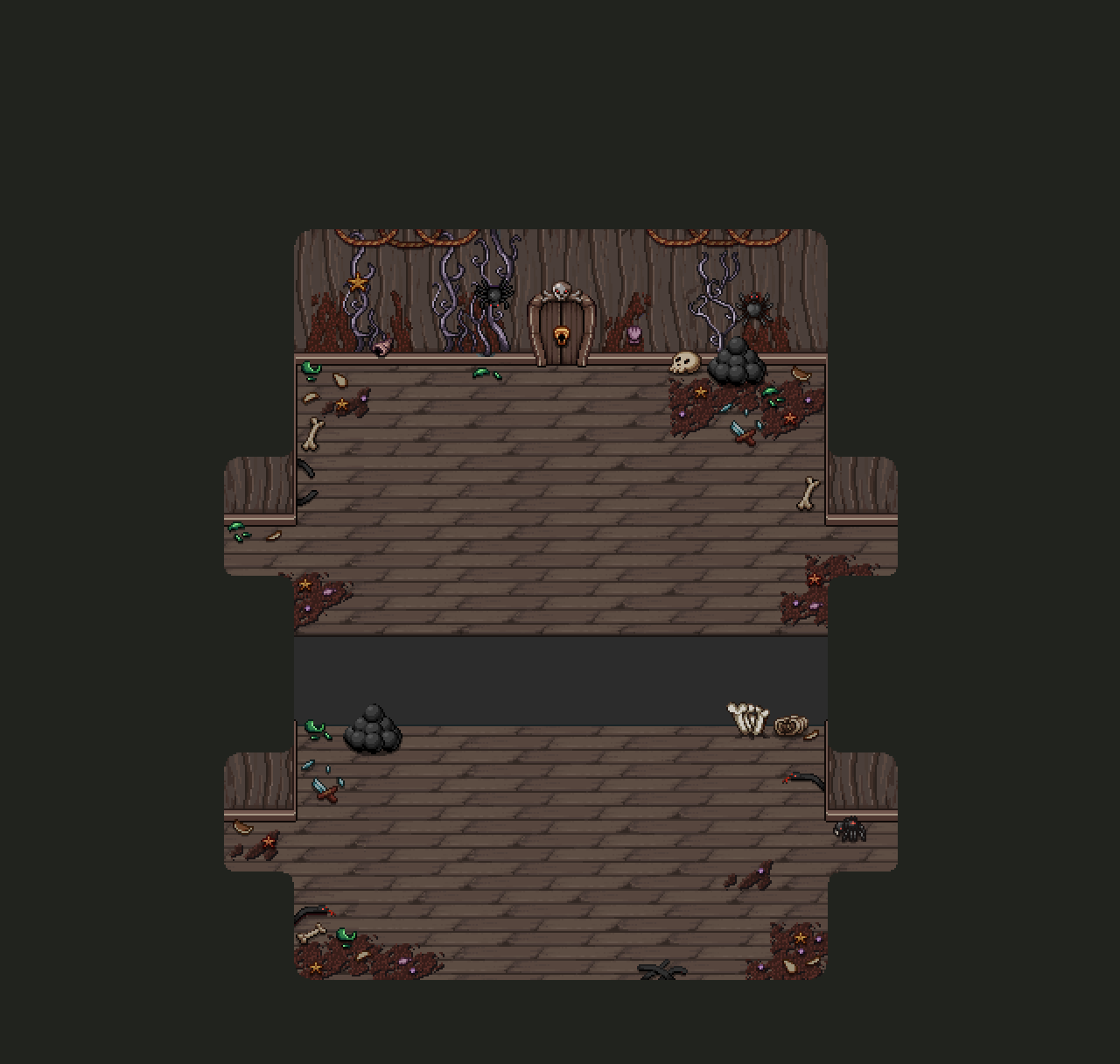