Have you all have a nice easter break (for those of you celebrating or taking time off during the holiday)? :) We’ve had a lovely time with family, but now it’s time to get back to work! This week we’ll start off by showing a couple more backgrounds for the boss rush: 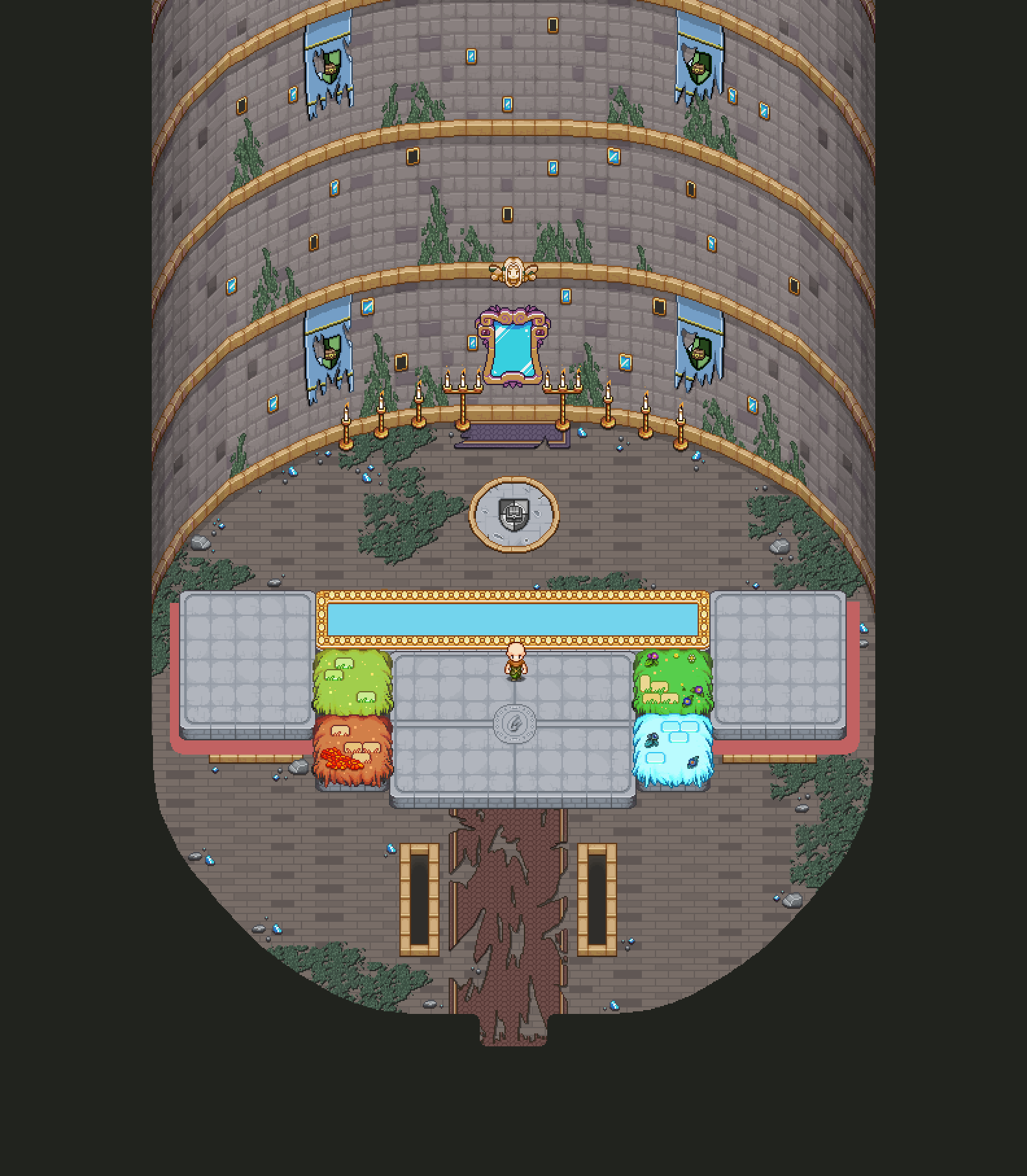 This first one is the floor for the Hydra boss, which I believe we’ve mentioned a little bit earlier. It will include a spring Hydra, so all four seasons are involved, hence the four different platform, each representing a season as well :)

Next up we have a truly terror-filled floor featuring the Power Flower AND BEES! Don’t worry, if it turns out in prototyping that this was a terrible idea, we may still cut this part of the boss fight (or will we? mwahaha): 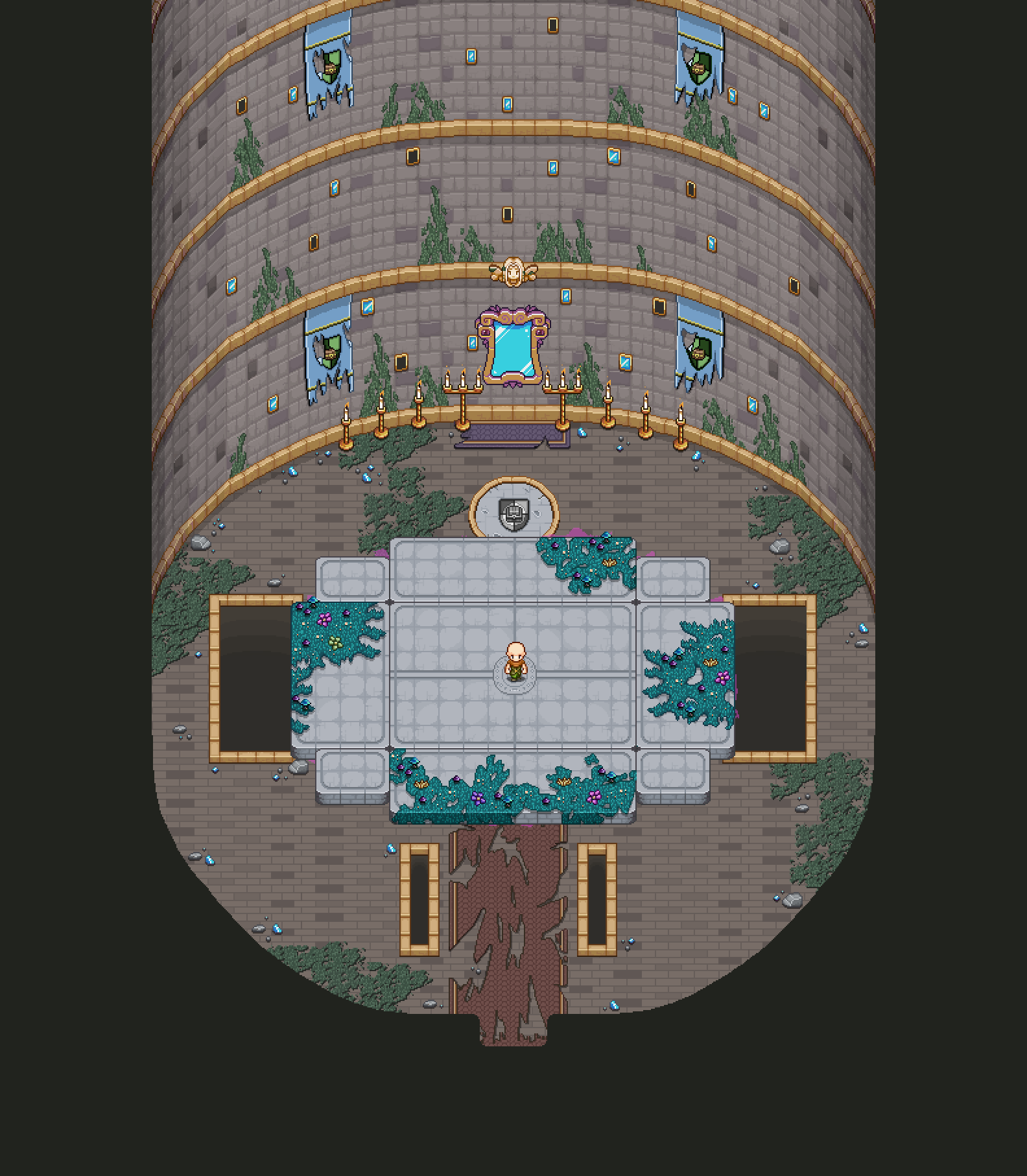 Teddy, meanwhile, has started playing around with transitions between floors, and here’s a little sneak peek of that:

And Fred continues on with the actual boss fight of the dungeon – Zhamla! Here’s another animation from his department:

This week we’ll start off with another Boss Rush floor, this time the GUN-D4M floor, which will pretty much be the Phasemen floor – but destroyed by the sheer force of the GUN-D4M starting the battle! Let’s have a look: 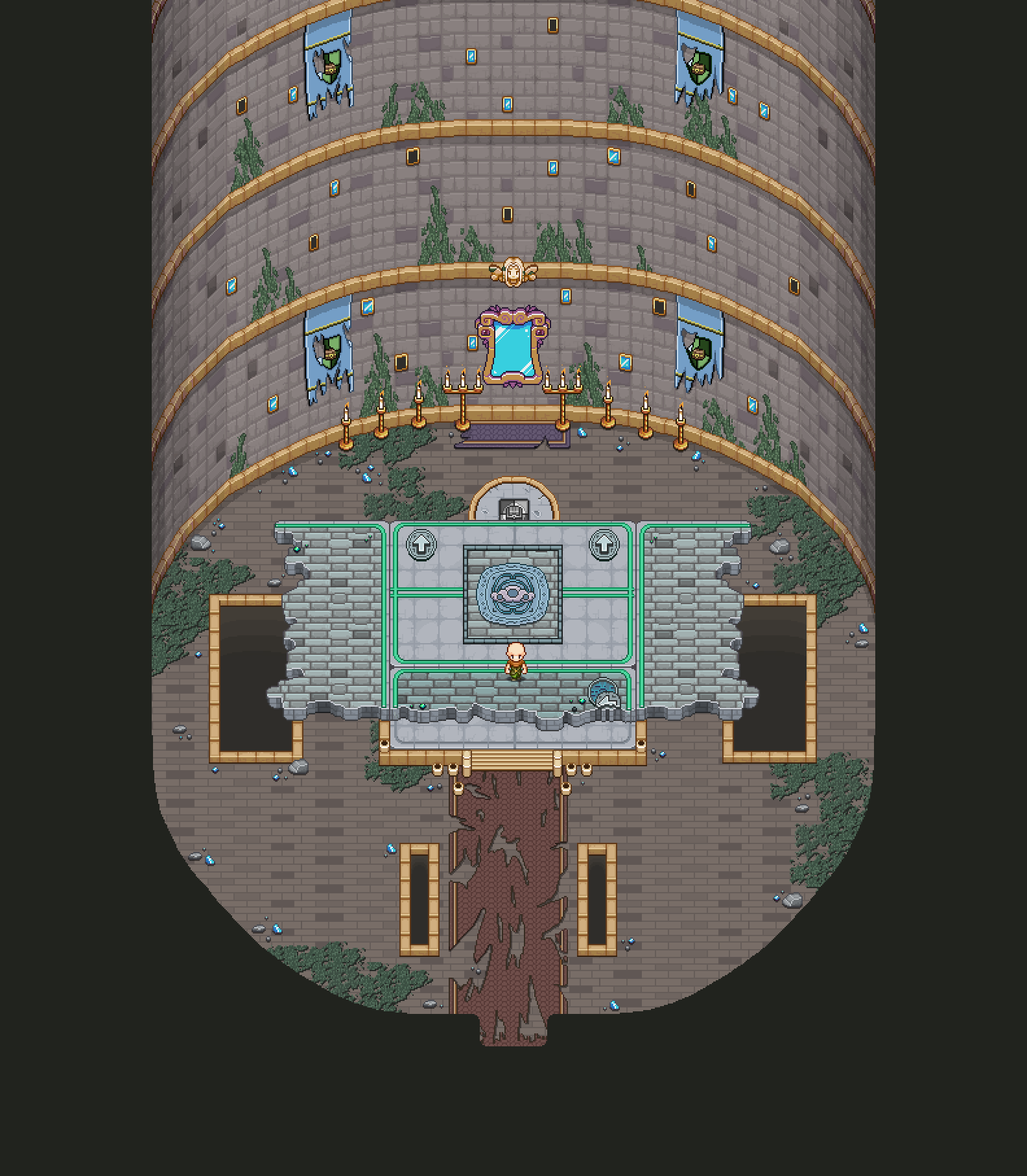 One of the other things we’ve spent a lot of time on lately is what it’s gonna look like actually summoning these bosses! Each boss will be summoned by the Mirror artefact who ‘governs’ the Tower, and so our idea has been that we want some kind of mirror or glass effect as they appear. The videos below will give a pretty good idea of how our iteration process works – starting off with something small and building on it and editing it here along with more details, until we have something we’re happy with.

So, first up, here’s a couple of our very early iterations:

Then, we added a glass/mirror-like colouring for the next couple iterations:

Here we begin to play around with a glass shattering effect, which in these early prototypes is still very crude, as you can see:

Here Fred has gotten his hands on the prototype and started making some graphics! The shattering effect is still pretty basic, though:

With more proper graphics it’s starting to look more and more like something that would actually appear in the game! Here the “summoning-shards” have better graphics, and we’re playing around with various sizes for the mirror shards as they shatter:

We’ve also been working on the elevator itself, adding some darkness to give a better sense of dept to the dungeon:

Pretty cool huh? It’s really exciting to see this all coming together :) Now, next week is easter here, and with the restrictions finally being out of the way for the most part, it’s time to spend some time with family!

Therefore, there won’t be an update next week, but the blog will be back as usual on Monday the 25th! See you then :)

Let’s start with the Terrorweed floor: 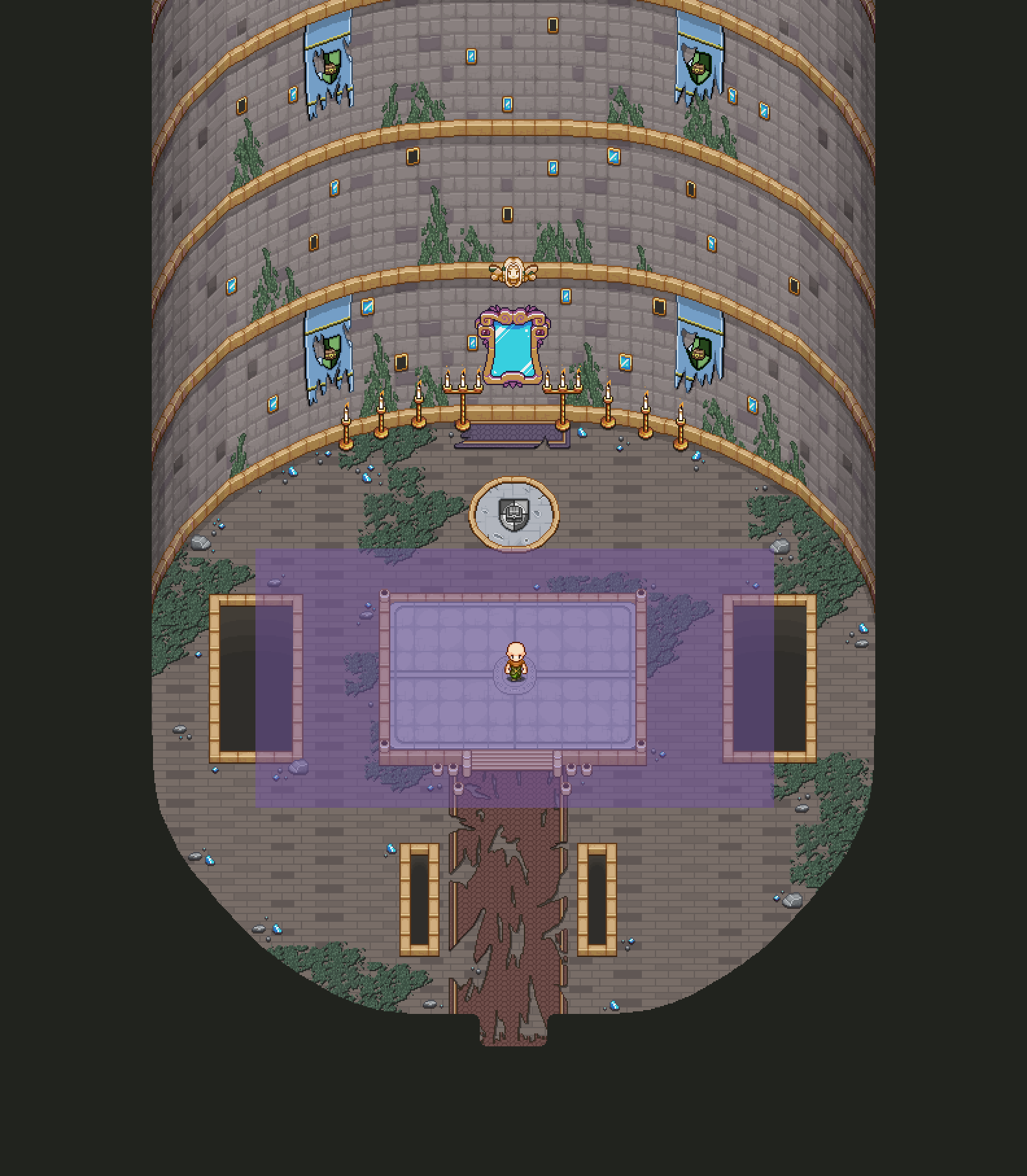 Size wise, it’s pretty similar to the previous floor, so we decided that the transition between these two floors would mainly be the mirror changing the colour of the grass and having new decorations pop up. In other words, the elevator sizes will remain the same for this one: 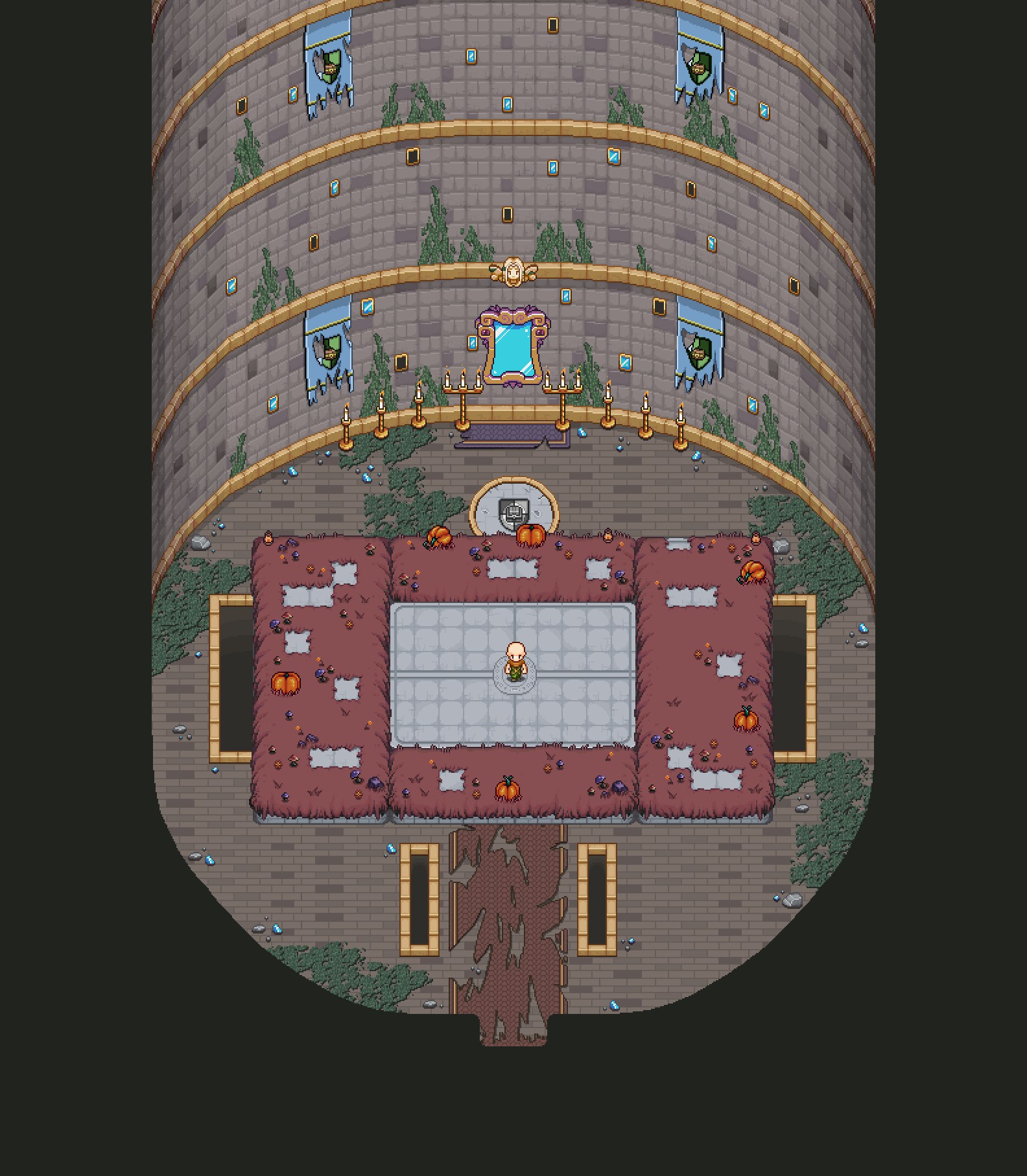 Now, the next floor, where you’ll face off against two Phasemen, will be a little bigger: 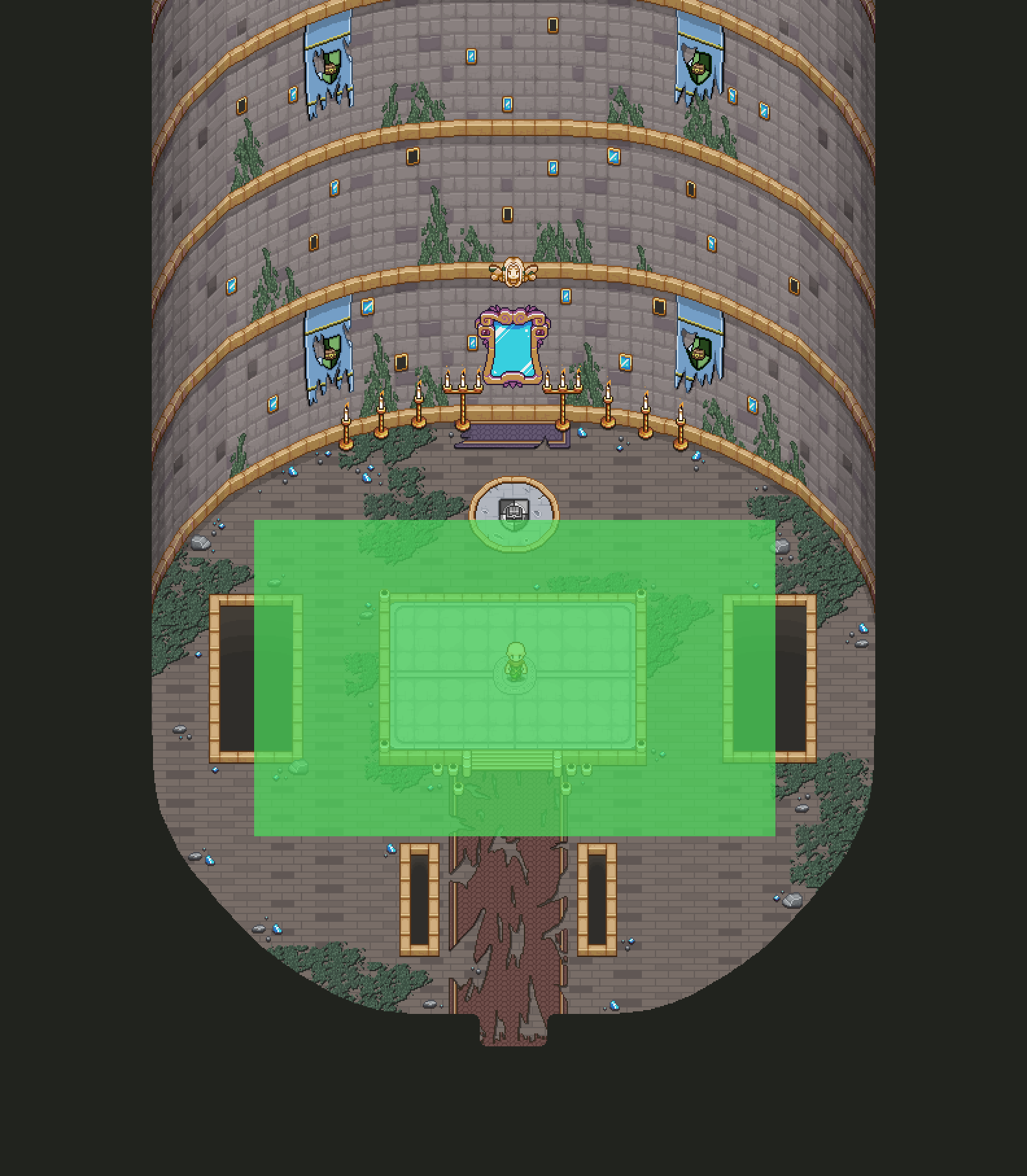 Here, I began by adding two elevator pieces “above” the original elevator, but then I realized a parts of this elevator will be destroyed by Gun-D4M that will appear mid-fight, and I knew we had mentioned keeping the elevator whole for the entire duration so we ended up having a long discussion about whether or not it should break – in some ways, it’d be pretty cool, but in the end we decided on our original idea of keepign the main elevator itself whole while the rest could get destroyed to fit the size change. As such, I had to remake this floor, keeping the elevator at the top to ensure it wouldn’t get destroyed once the floor starts falling apart:

And so, here’s the final version of the Phaseman floor: 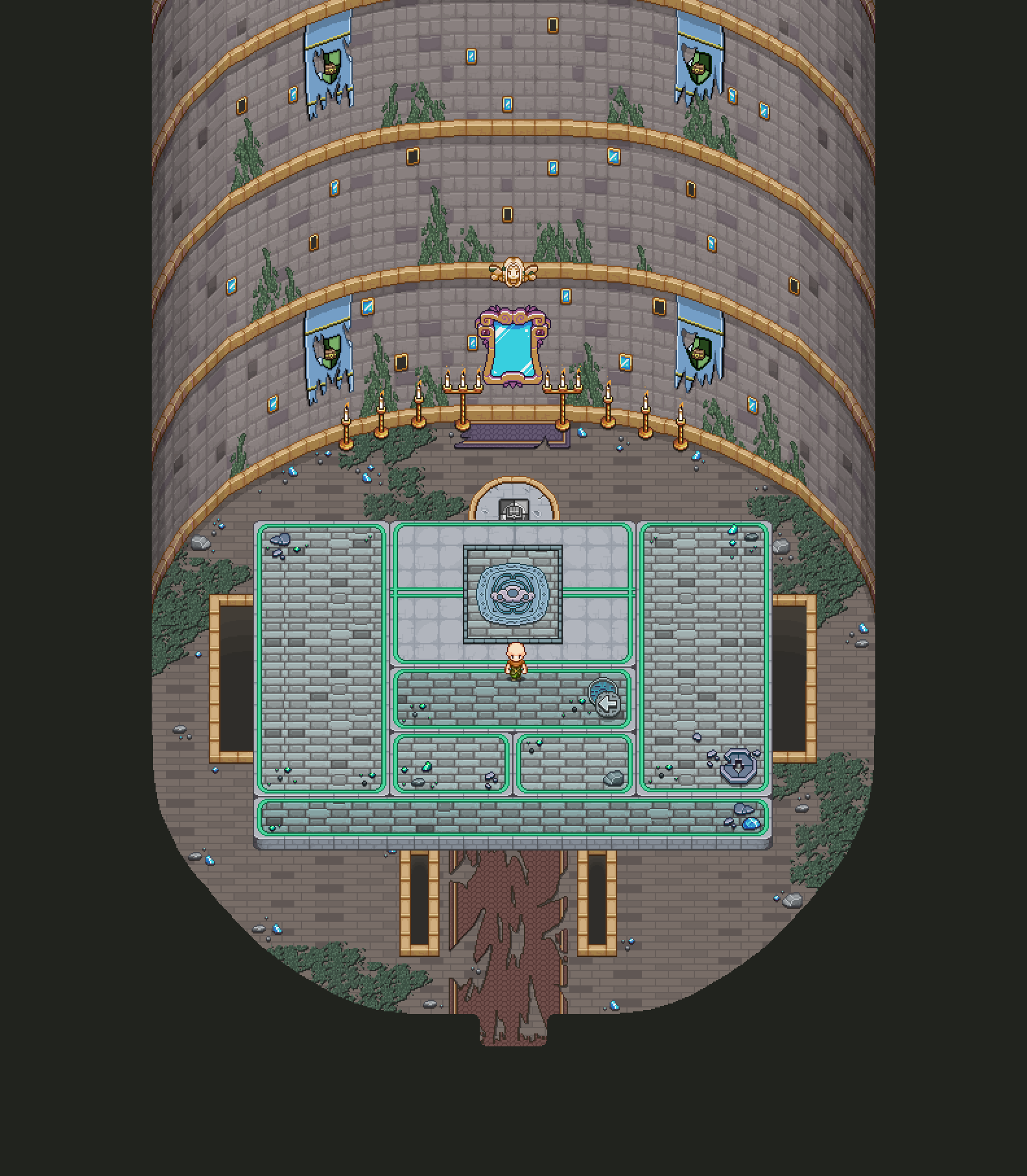 In Teddy and Fred’s department, we’re starting work on the mirror summoning bosses for the boss rush! Here’s a little sneak peek of some of Fred’s animations:

More details to come next week :)