New week, new tasks! This time it’s all about making that first floor of the final dungeon. Let’s start with the left pillar, where you’ll do a fishing and puzzle challenge: 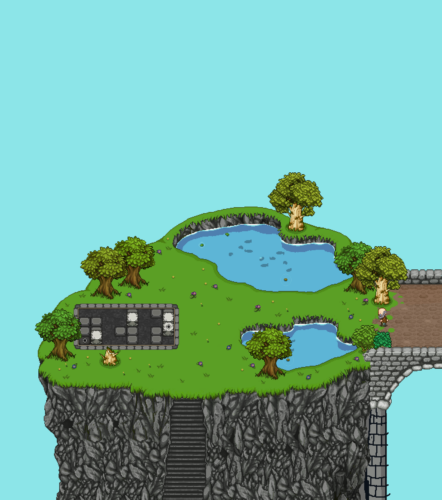 Next, the bridge connecting the two pillars. You’ll fight a bazillion Teddys and Freds on this bridge, and since we don’t know exactly how long it needs to be, I had to make it able to repeat itself indefinitely. In order for the player to be further reminded of their first encounter with Teddy and Fred, we decided to use the very bridge you pass over in Pillar Mountains / Evergrind Fields as a base: 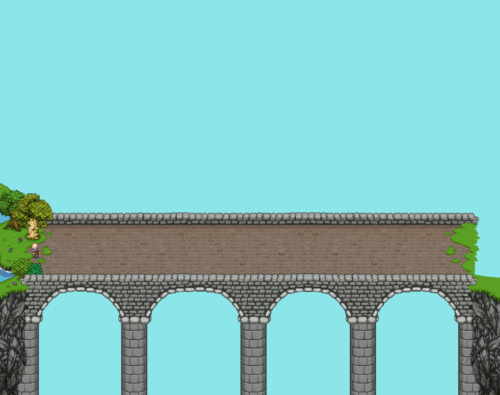 Next, the right pillar, where you’ll do battle against Vilya (and possibly Giga Slime)! Here I used the Arena as a base, since this whole dungeon is all about reminding you of the old places you’ve visited throughout the game: 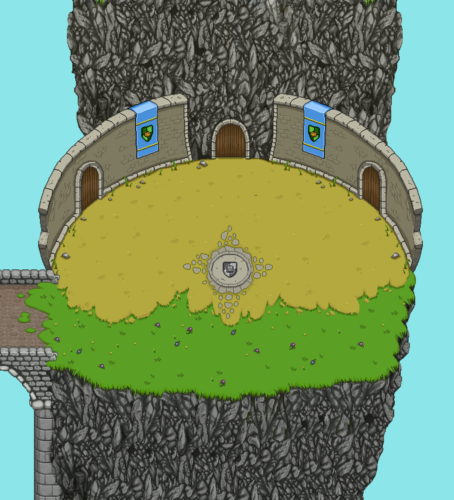 And finally, adding a bunch of details and props to make the area feel a bit more alive. Plus shredding the collector banners for “dramatic” effect, cause why not? :)

Time to start this week with another meeting! As you know, we’ve been going through each of our old floor designs for the final dungeon and deciding whether we want to keep them as is or improve them in any way. This week we talked about the Mount Bloom and Tai Ming focused floors!

On the Mount Bloom floor, you’ll find a Mount Bloom combined with the festival themed area where you’ll compete against Cavelings in each of the festival challenges, with a twist. We were still quite happy with this floor, but we had some notes on a cutscene towards the end that we fleshed out a bit, making it a lot better.

The Tai Ming floor, meanwhile, seemed incredibly long now that we decided to shorten a lot of the previous floors. Before, the idea was that you needed to help three different ghosts with a challenge each (either battles or puzzle related), before being able to collect the three Tai Ming emblems from them, which in turn would trigger an advanced version of the Priestess battle. Now we’ve decided to simply let the player talk to the ghosts and get the emblems that way, making the floor a lot shorter and more to the point. We now feel a lot happier with this floor as well!

Next week, we’ll take some time to discuss the final floor we need to decide: the Dragonbone Dunes floor. Yes, I know there’s still the Ghost Ship floor, but as it happens, we’ve always been sure of what’s gonna happen on that one, so no need to redesign that one. The desert floor however isn’t exactly the way we like it yet, so as “homework” for next week’s meeting we’ll each take some time to think about what different options we have for the floor :)

But for now, onwards with more art stuff! Starting with a quick return to Arcade Mode! There’s a couple transer screens needed for when your character runs towards the next area, showing your score as you go. First up, the transfer between Tai Ming and Dragonbone Dunes: 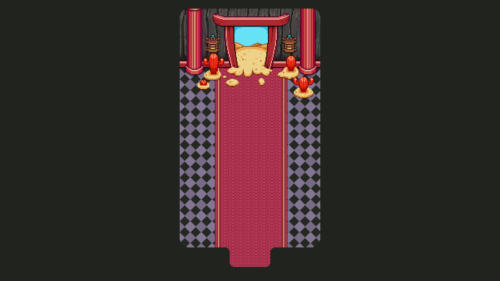 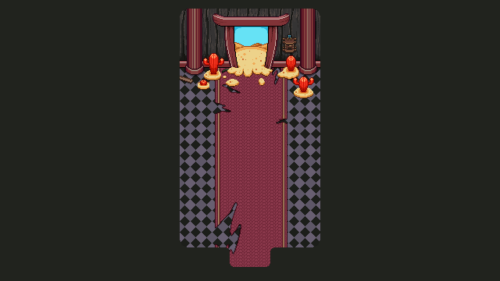 And next, the transfer between Dragonbone Dunes and the Ghost Ship: 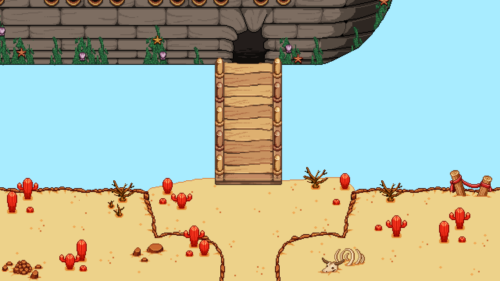 In Teddy’s department, it’s all about the battle against Grindea, a battle we’re getting more and more excited about!

The idea is that she’ll have two forms: one “regular sized” form, where she’ll be pretty much player sized and have a bunch of different moves. Here’s a couple ideas we’ve thrown together – big warning that we’re using a LOT of placeholder graphics in these, just to get a feel for the mechanics:

And as a bonus, here’s our very first test, before any mechanics at all were added, just a very basic Grindea running around in a circle (square?). Pretty cool how iterations work, and how we’ll soon go from the placeholder graphic versions above to stuff with finalized art. This is probably one of my personal favourite parts of game design, seeing how things go from something basic and crude to more fleshed out and detailed designs!

The second form she’ll have is this giant, “proper” goddess form, where she’ll have a different set of attacks:

More to come! Super excited for this battle, which should be one of the most difficult and epic fights in the game :)

Aaaand I’m back! It’s been a couple of really nice weeks, as predicted, but it’s time to jump straight back into work, so let’s start off with one of our most recent design meetings, involving the next floor of the final dungeon – the Temple of Seasons!

This floor remains pretty similar to its original shape, but we’ve spent some time fleshing out the puzzle part of it. As a reminder, the idea with the temple of seasons floor was that you’d enter a lobby room of sort in which there are three doors, but only one is accessible from the start. Upon entering this door, you’ll enter a mixed season battle room, after which you’ll free Summer. With Summer along with you in the lobby, he can change the season so another of the doors open, behind which is a season change puzzle and a captured Autumn – upon releasing her she’ll change the lobby room to autumn and as such open up the door to the next floor of the final dungeon.

But what about the puzzle then? We decided to each make at least one design for it each, and then either use of our designs straight up, combine a few, och edit someone’s idea until it felt just right. 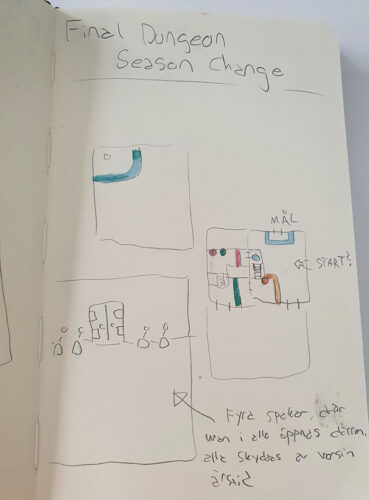 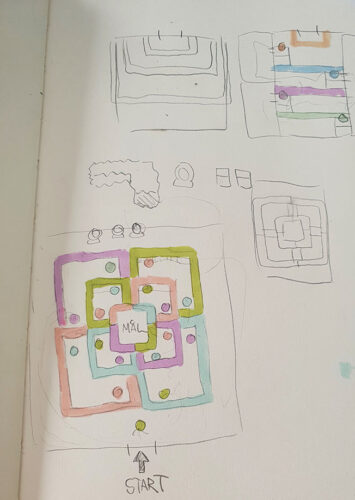 Some of Freds designs above! 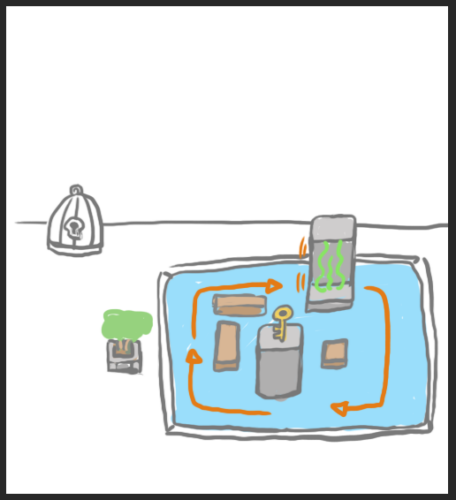 My design is a pretty straight forward puzzle in which you have to reach a key on a platform by using an unstoppable (?) moving block in the water, some floating wood, a plant, and the power of the seasons! For now it seems we’ll use some variation of this idea. Let’s see if you can figure it out in the game! :)

Next up, we have some more of those archery backgrounds! Let’s have a look:

And coming right up, the last bunch as well:

As we’ve mentioned before, completing Arcade Mode will grant you a chest with some fancy stuff! But since this is technically the final reward of the game and pretty difficult to get, we wanted to make a proper, more epic type of chest for it! 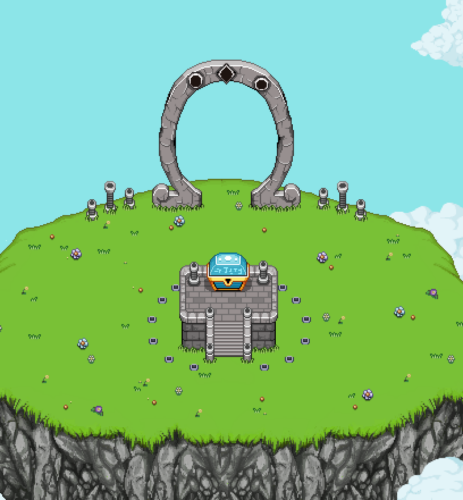 Meanwhile in Fred’s animation department, we have more grindea animations, a strange portal, and another fish! Enjoy :D