As you know, we’re drawing ever closer to the completion of this game, and since I’m usually a bit ahead of making the background art and such, we’re nearing a point where I’ll run out of stuff to do! So how to keep me busy?

Well, we’ve had a budding idea of having me prepare the graphic assets and likely, most of the writing, for a little side project, or a companion piece if you’d like: basically, a visual novel where you’re a Collector, interacting with other collectors and sentient artifacts!

This game will be a very short game to go along with the Grindea universe, so we’re not talking any big investments of time here, even for me – but it’ll give me something to do while Teddy and Fred finish the last bits of animations and code for the main game. And it may also serve to give you guys a bit more insight in the world of Grindea!

Because of the planning needed, you’re likely going to start seeing some sketches and rough ideas for this project come up on this blog soon. So how do you guys feel about visual novels? Any particular ones you like, or dislike? Features you’d like to see in a project like this?

Again, keep in mind our goal here is just to make a little companion piece, so it’s not gonna be very long or super complex – just a little side project in the same world :)

Next up with actual Secrets of Grindea stuff though, for the Grindea boss fight we’re looking at having a total of three different HP-bars! Time to take a look at those: 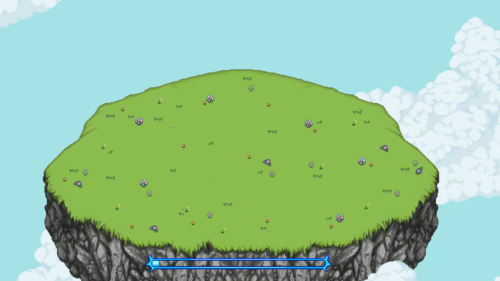 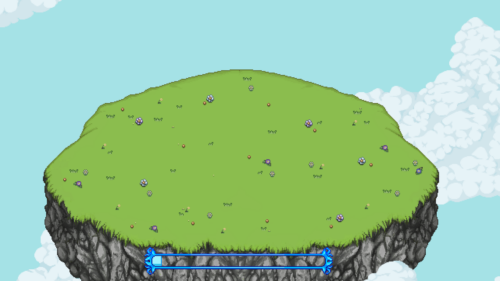 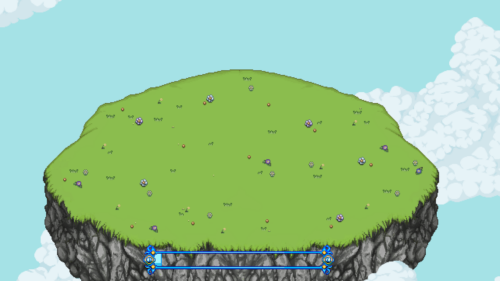 Now with the Grindea boss fight drawing ever closer to completion, it’s time we start working on a proper victory UI for Arcade Mode instead of the standard Game Over one!

Here’s the regular version, as a reminder: 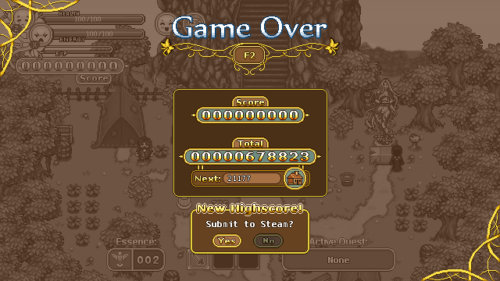 And here’s the post-Grindea one, which will be more blue. It has a star instead of the floor number, and will most likely show up against a black backdrop as seen in the second picture below, as it’ll appear after the credits: 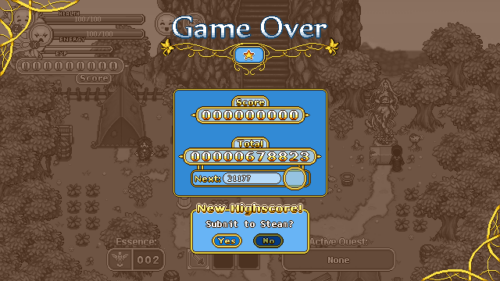 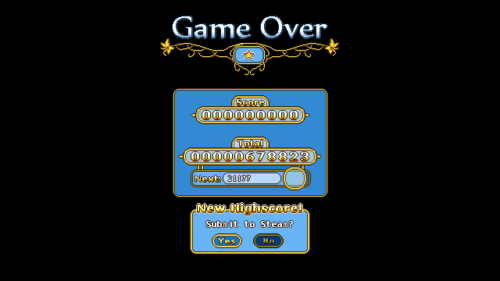 Of course, in the above examples there’s still the usual Game Over text, but in the actual interface it’ll say “Victory!” one you’ve defeated Grindea. We’ve made three versions of the next now, though, with “Victory?” showing up when you finish the game without battling either Bishop och Grindea, and “Victory” showing up when you defeat Bishop! 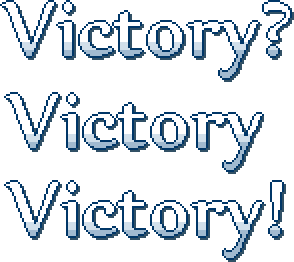 Next up, for Grindea’s big battle, we want to add a starry space-like background for one of her attacks, and as such, I was tasked with making a simple space background! Let’s have a look: 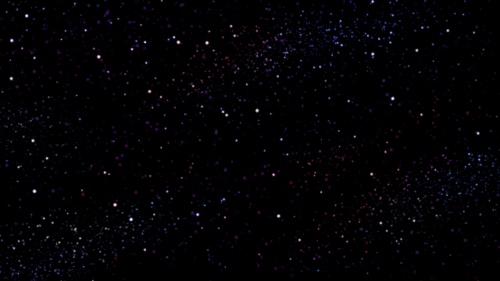 As we draw ever closer to you being able to finish your Arcade Mode journey, it’s time to add a proper way of getting up to that island where your fate will be decided. Using a standard portal? Nah, let’s do something a bit cooler: flying up yourself! Have a look:

One thing that’s been missing from the stylist for a while now is a way to rotate your character preview so you’re able to see what you’d look like from more than one direction! Since we’re working on adding the final haircuts now, we decided it’s also time to add that missing feature, and as such, we’ve spent some time trying out various interfaces showing you how to rotate the preview: 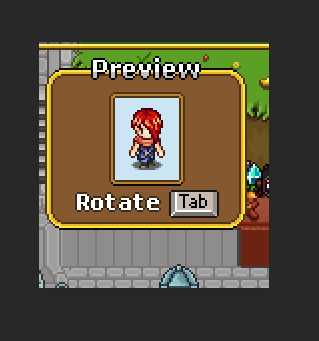 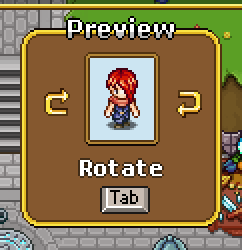 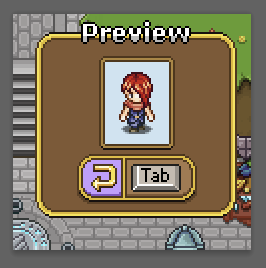 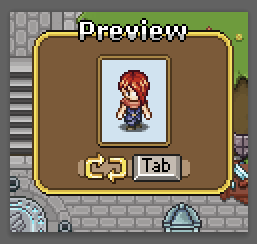 Right now our current favourite is the last one. Which one do you prefer?

Next up, we have a bunch of haircut fixes! To start off with, this one seemed to lack a bit of the ‘swirly’ part of the bangs showing from behind, so I added that:

Since this haircut is super wide we needed a version of it which can be used when you wear a full coverage hat as well, made here below:

As for this one, we felt we wanted to show the bangs on the side a bit from behind as well:

Next up, it’s time to decide in what order to display the haircuts! For now we’ve decided to go from shortest to longest (well, kind of – we haven’t measured them all exactly, so some variations may occur), divided over two pages with 16 on each. 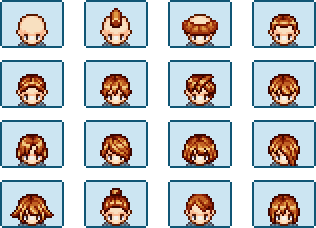 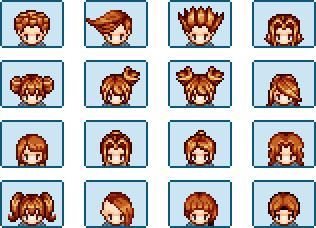 Finally on the haircut side, we realized the new haircuts looked a bit off when added to the game, due to some palette swapping mishaps. As such, I had to remake them slightly! Here’s a couple of them, with the original version first, the recolored version second, and the improved remake third:

In Teddy & Fred’s department, we’re mainly still focusing on the Grindea fight, but some other animations and cutscenes are made here and there. Here, let’s the a look at one of those, the activation of the portal that will take you to Grindea’s realm:

Now it’s time to start looking at the Mount Bloom / Festival floor of the final dungeon for real! Let’s start off with an introduction room, the first you’ll find yourself in within this floor of the dungeon: 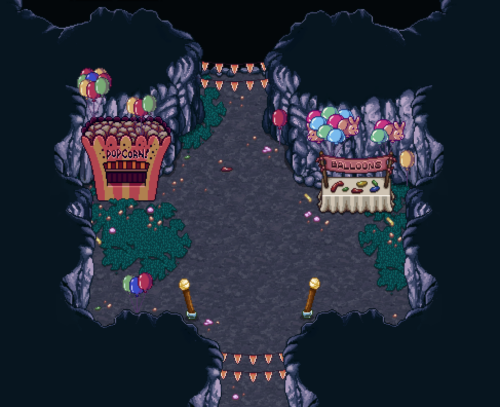 Next up, the exit and northern cave room, featuring the strength challenge: 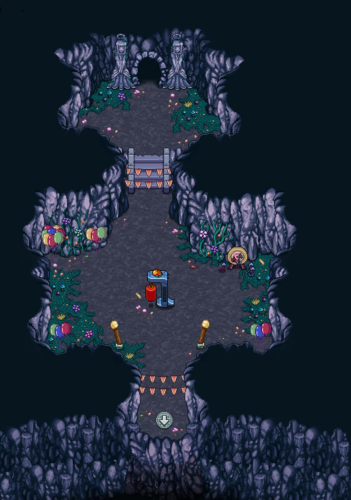 Next, there’s the fishing challenge, set in a cave setting: 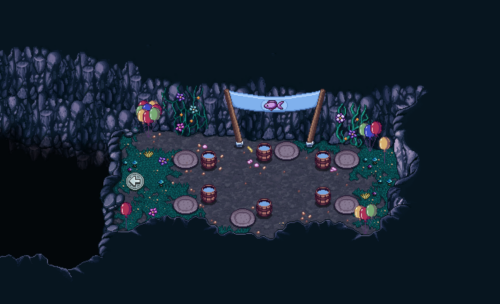 And finally, the running challenge:

And here we have the complete thing, all rooms together: 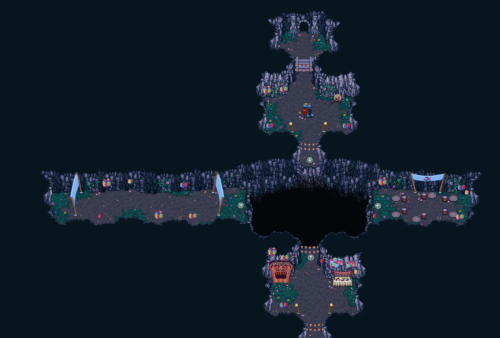 Meanwhile, Fred continues work on Grindea and her attacks, including a mysterious space rift:

This week I continue working on those final dungeon floors, continuing on with the Flying Fortress floor to start off with. Aside from just having a platform for battling the bosses, you also need an entry point and an exit, which is what we’re taking a look at today: 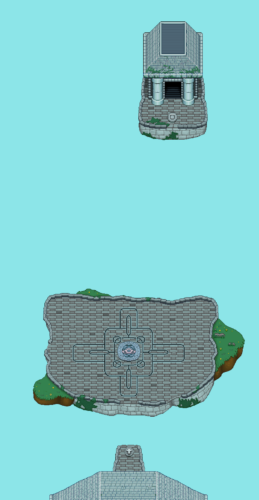 Next, a quick sketch to give you a basic overview of what the Mount Bloom floor will look like! I do this a bit ahead of time so we’re all on the same page of the layout before I start making the actual rooms.

As you can see from the sketch below, you start of in an introductory room. In the middle, in the very dark spot, will be a very simple phase shift course which will take you either to the room on the left, the room on the right or the room above depending on how you move through it. You need to reach and complete the challenge in each room to be able to continue on to the next floor through the north exit :) 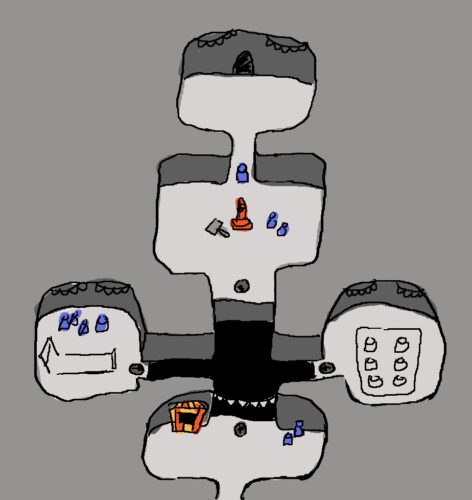 But before heading to Mt Bloom, there’s the Seasonne floor to take care of! Without further ado: 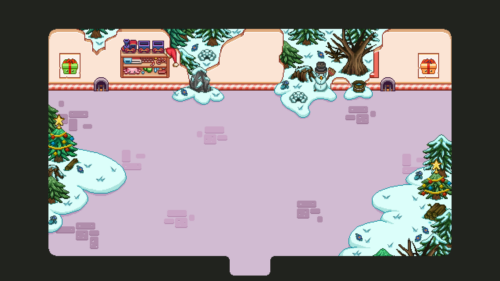 In this next part of the floor, we add some more detail and stuff around the walls so that the colliders are all pretty much even, so you won’t get stuck against the trees if you find yourself pushed against the wall at some point during the battle: 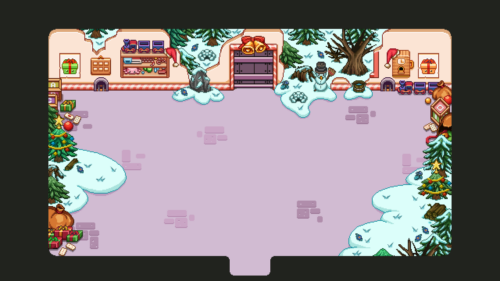 Meanwhile, Fred continues his work on Grindea! Let’s take a look at this epic dash: