First of all, thanks a lot for your comments on last week’s blog post! Most people seem to agree that Easy Mode isn’t needed, so that’s how we’ll keep it until it seems that opinion have changed :)

This week we’ve once more, in the spirit of having shorter design meetings but scheduling them more often, had another set of discussion regarding upcoming Grindea stuff! This time we’ve mainly focused on the next dungeon (!) and the bow.

The Fourth Dungeon
So, we’ve talked a lot about this back and forth over the years. We do know we want it to be ghost/undead themed, but it’s been hard to decide on a setting, and we’ve gone from wanting it to be a ghost ship, to a ghost ship + an island, to a shrine on an island, and back to just a single ghost ship. After today’s meeting I’m fairly certain the 4th dungeon will indeed be a ghost ship, where your goal is to move from the bottom of the ship to the deck where the final artifact awaits you.

So far, in our very basic design, there will be a big floor at the bottom, which will be used as the ship’s storage area and where you’ll move through a set of rooms solving various obstacles until you get the skill used in this dungeon: an item that allows you to see into the spirit world. Some of the enemies and other.. things.. on this ship can only be seen & interacted with when using this skill. That means there might be flying swords coming after you that you can do nothing about until you have the skill that allows you to see the actual enemies!

The following two floors will consist a main corridor, which you’re supposed to get through. Only there’s obstacles in the way forcing you into other doors in hopes of finding a way around the obstacles, finding enemies and challenges on the way.

The ghost ship will probably be around the size of Temple of Seasons (that’s what we aim for, at least), and the main focus of the dungeon will be to use the dungeon skill to solve various puzzles and obstacles.

The Bow
We also talked a bit about the bow, since it’s something we haven’t touched upon a lot since it was implemented a hundred years ago! We agreed that we want to add more upgrades for the bow in general -even bigger quivers, more damage, etc, but we’re also looking into adding a bunch of talents for it (we want to add a ton of talents for basically everything, haha).

We’re also thinking of adding a NPC somewhere that can modify your bow into a fire or ice bow (there might be more options as we come up with them). With the fire bow, your arrows have a chance to burn on enemies, and the ice bow has a chance to make them cold. I’m guessing this NPC would be found in the later stages of the game, perhaps in the upcoming desert town. Either that or modifying your bow will be expensive enough for most people to save up for it for a while. But nothing about that is set in stone yet – gotta finish Tai Ming first :)

Speaking of Tai Ming, we’re of course continuing to work on the final part. This week I began working the second to last map for Tai Ming: The Courtyard!

After this there’s actually only the final Boss Room (which will have a couple of variations, so it’s still a bit of work left before I’m ready to completely leave Tai Ming behind)… What a journey!

For this background, let’s start with the basic sketch: 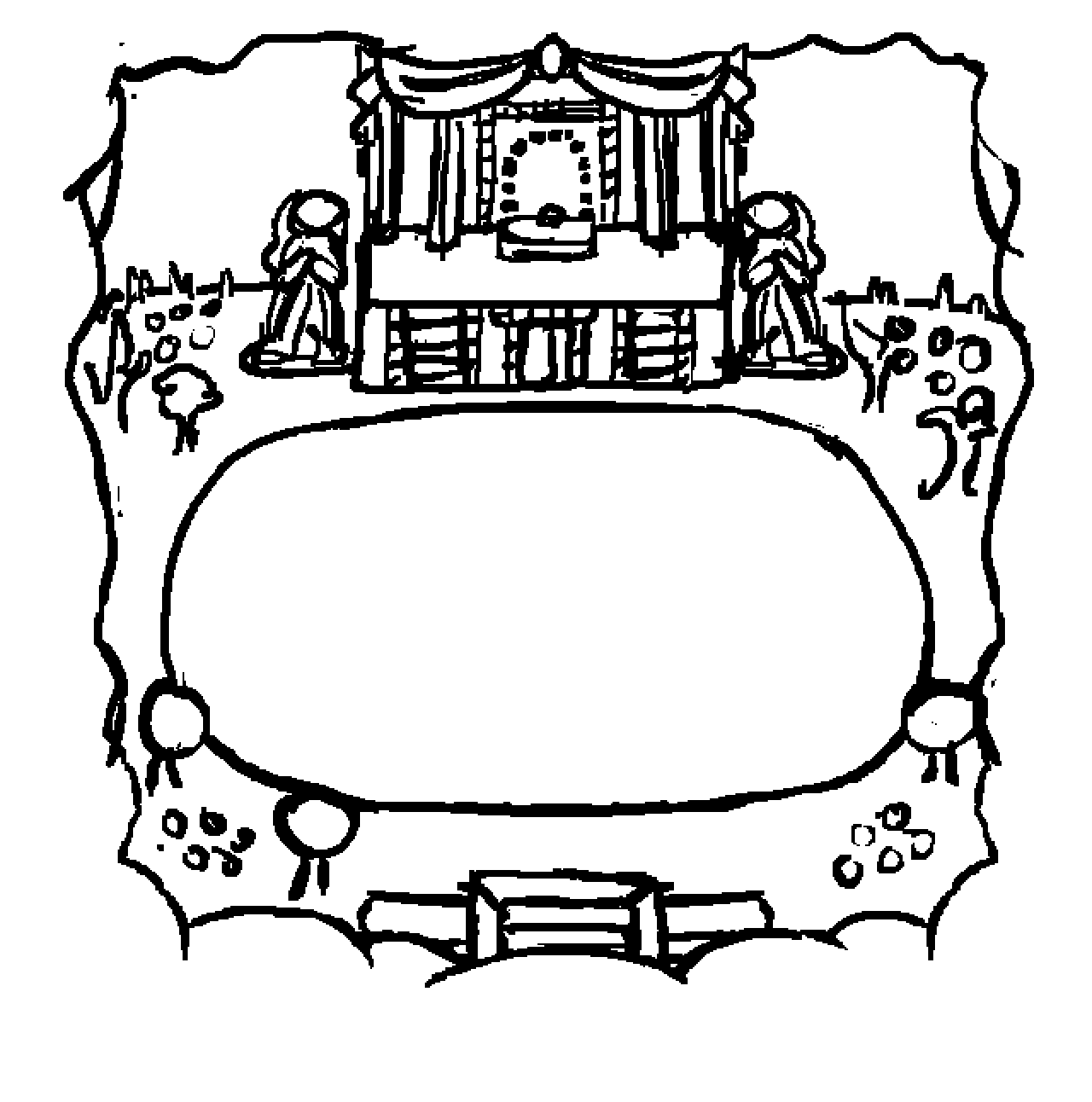 The circle in the middle are my indications of where you need to be able to battle stuff, hence there shouldn’t be a lot of stuff in the way around there. Otherwise we have a huge altar of sorts, and some greenery…

And the final image below! You may notice the door from my sketch (on the altar) is missing. Actually you probably didn’t notice since it wasn’t very clear it was a door…. BUT in any case, there will, indeed be a door there in the future (I hadn’t made it at the point of taking the screencap below…): 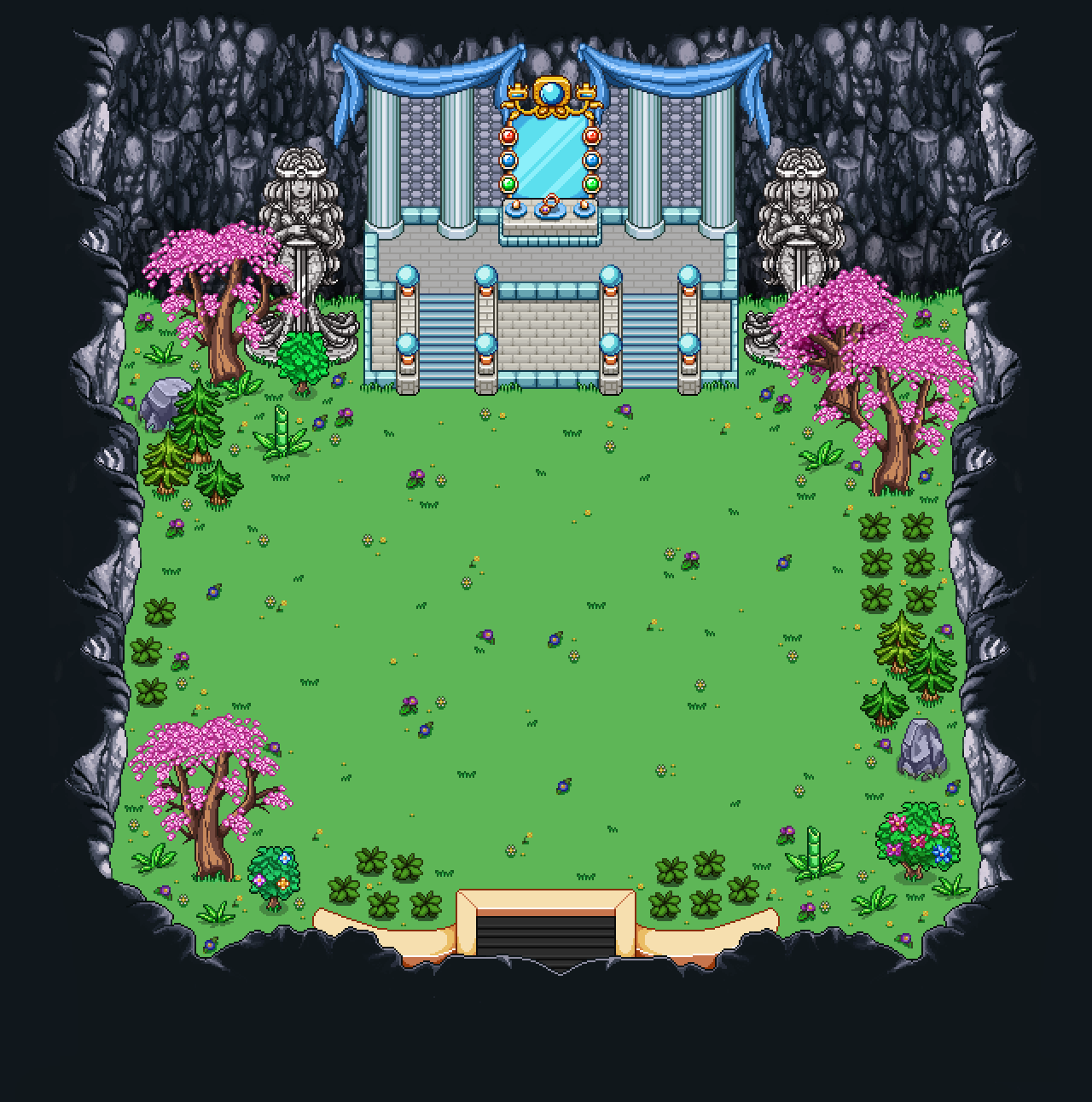 A somewhat related thing we’ve been working on recently is creating a suitable effect for an upcoming battle! In this recap, I thought it’d be fun to take a look at our iteration progress as we implement and improve upon an idea.

So, this battle takes place in that courtyard above, and in the beginning, we had a vague idea of the battle area being surrounded by a circle of flames. Once the background was ready, Teddy went ahead and made a quick prototype of what that circle could look like: 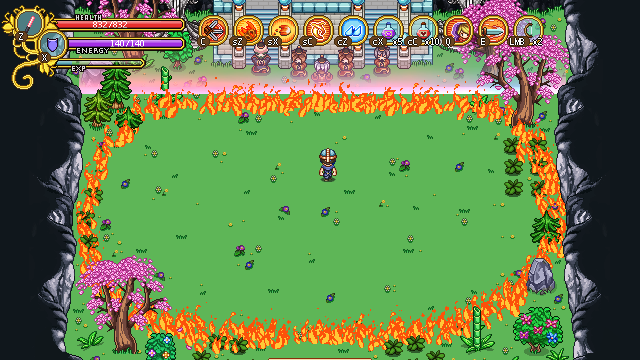 While it certainly gives some kind of effect, it also felt a bit underwhelming. While discussing our options, we thought about making the trees and bushes burn, using another color flame and using different sizes for the flame particles, among other things, but nothing really felt spot on.

During our talk it also turned out some of us had imagined the flame circle differently. And so we went on to prototype another idea, where the fire would cover everything not inside the battle area. 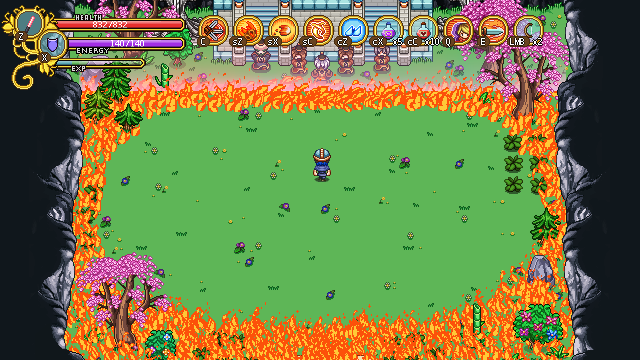 Now this felt a bit more epic, but it still felt like it missed something. So I decided to take the above screenshot into Photoshop and started painting on top of it, creating a mockup of what I thought would be a cool effect for the battle: 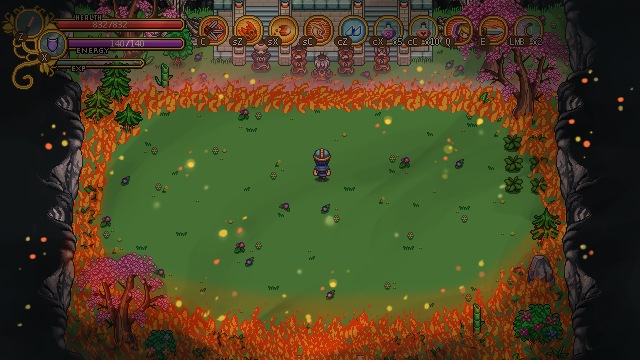 After showing it to the others, Teddy used my mockup as a base and created a third prototype, this time featuring the illustrated effects:

After seeing this in action, we all pretty much agree this is a much better direction than the first basic flame circle. And we’re still gonna add/edit a bunch of stuff! For one, the graphics are all prototype here, the sparks in the air and the flame particles will be different in the final version. We’ll also the add the burning trees and greenery we talked about after seeing the first prototype, and I’ll edit the ground to look more burnt around the flames.

Now, we could have chosen to look at the fire circle in the first screenshot and say “this is OK, let’s keep it”. Instead, we kept pushing to make the scene better and more epic. Would it have saved us a lot of time to just stick with the original idea? Yes. Would the fight be as epic in the end? No.

And this is why it’s so hard for us to estimate how long things will take! Sometimes our first try is good enough, but often we have to spend a lot of time prototyping different options and change stuff before we get something we’re truly satisfied with. Is it worth it in the end? Well, I certainly believe it is and I hope you guys agree! :)

….And now for something different.

After some further discussing of the Housing and it’s ‘batch’ system (where you unlock a batch of x items in the furniture shop every time you enter a new area), we made a list of base items that should be included in each batch!

There will be a bunch of additional, random items as well, but we thought it would be good to have a common base for each batch. The items available in each batch will be:

And so, I went ahead and added a bunch of basic items for the two batches I already started working on (more special items to come): 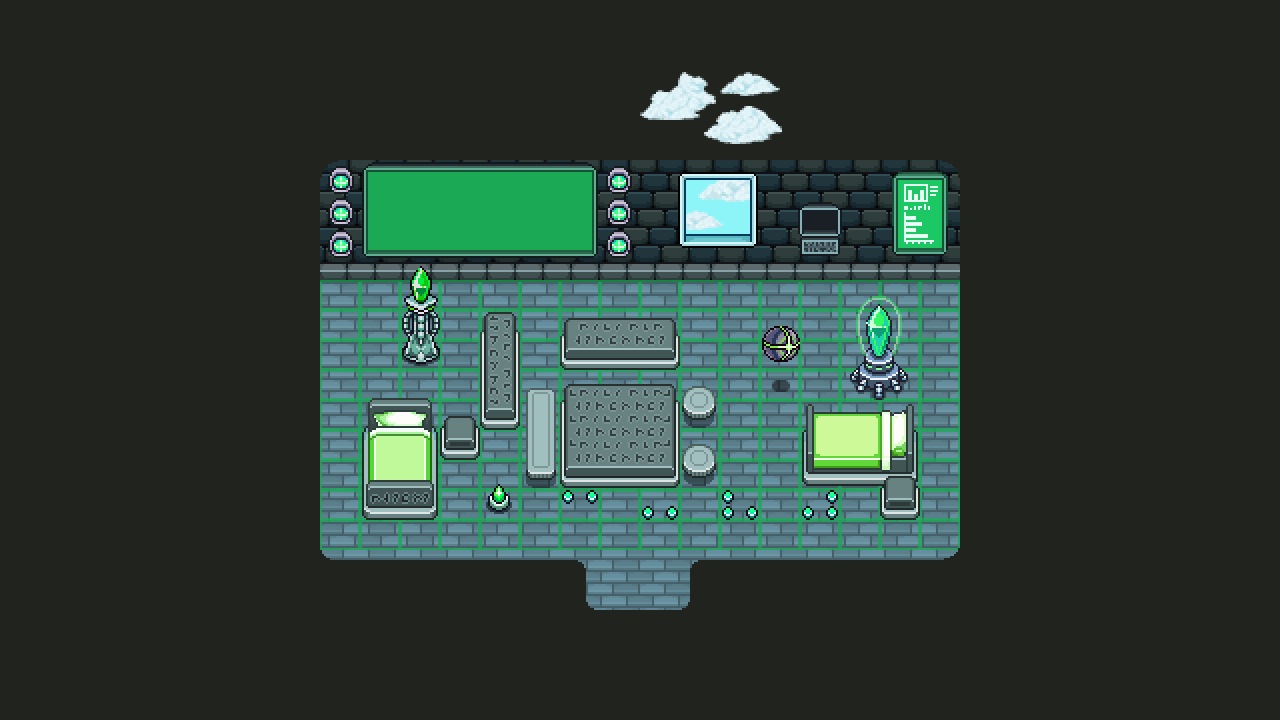 My dream for the Flying Fortress window above is that it’ll have tiny clouds floating by, but I haven’t confirmed 100% it’ll actually happen yet. If it ends up being too time consuming to implement we’ll come up with something else (or make a loopable animation of it perhaps). 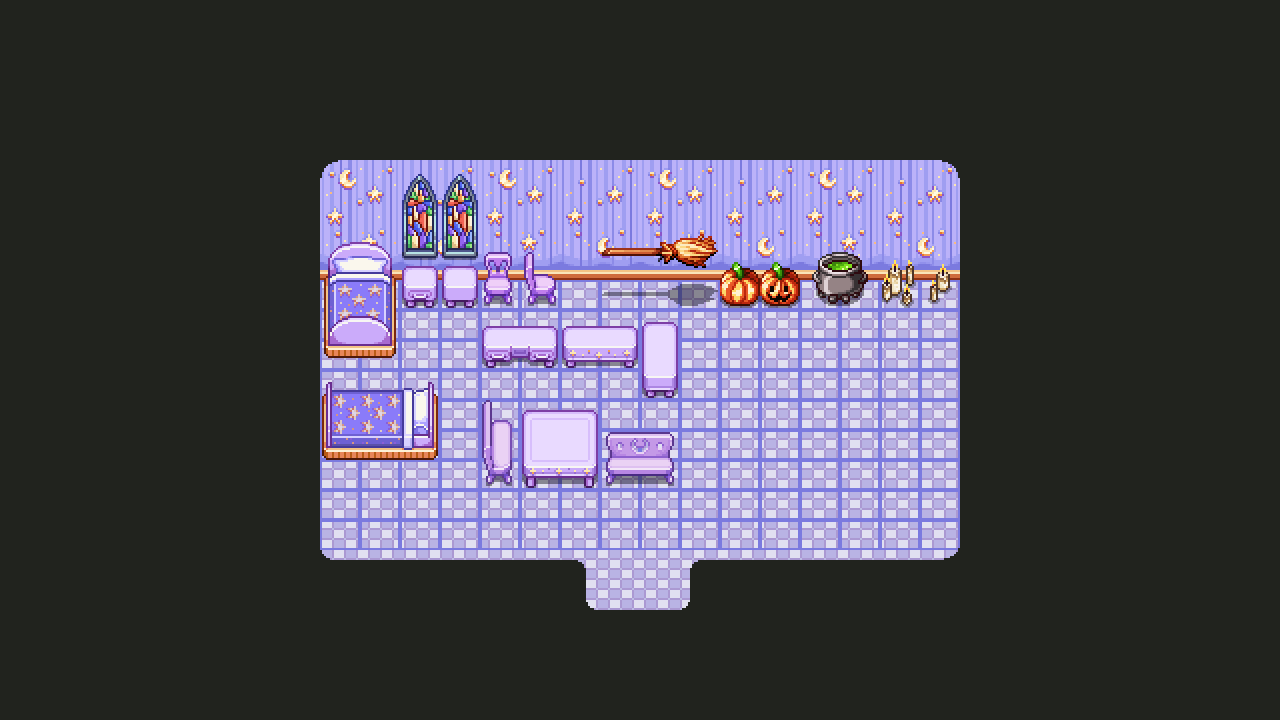 The above set will unlock when you enter Pumpkin Woods. Some of you might wish for a more extreme Halloween theme with scary ghosts and creepy stuff, but don’t worry! Those needs should be satisfied with another upcoming batch for.. another area… :3

Finally, because tradition, have a sneak peek at what Fred’s working on right now – the second stage of the Mimic battle! Yes, it’s growing… 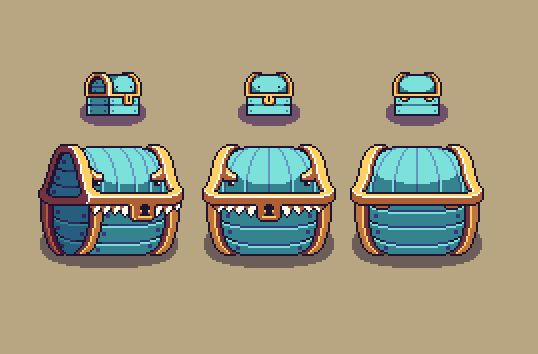 
Oh wow! I really like what you did the arena! Lighting really changes everything and the sparks/ash floating in the air really adds to it perfectly!

I’m also liking the idea of a ghost ship dungeon, reminds me of one of my most favorite games!