So a really long time ago by now, we started working on the Tai Ming floors. Or rather, I made a bunch of graphics for them and awaited a chance for Teddy to add them to the game for testing. Now, a hundred years later when we finally finished a ton of other important stuff, it’s time to dive back into the actual Arcade floors again, and it begins with fixing a bunch of errors. 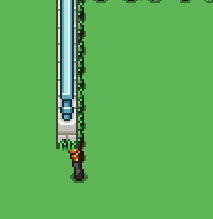 To start off, the first thing we noticed when adding things to the engine was that I had somehow failed making the openings in the two types of fences the same width, which creates a bunch of zoning problems….

….and secondly, all of us had completely forgotten how much space the interface takes in in Arcade Mode compared to Story Mode. If you take a look at the screen below, you can see a lot of the fighting area is covered by the map and score board: 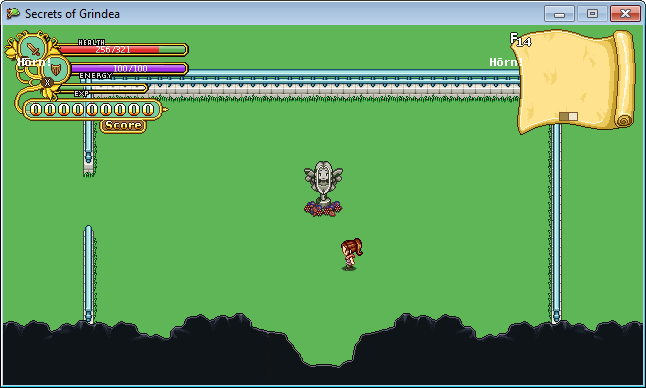 Not exactly ideal… SO, two kind of major things for me to fix: one, make sure the fence openings are equally wide, and make the fight areas smaller so they won’t get covered by interface (we certainly don’t want anyone losing precious score because an enemy was hiding behind the map): 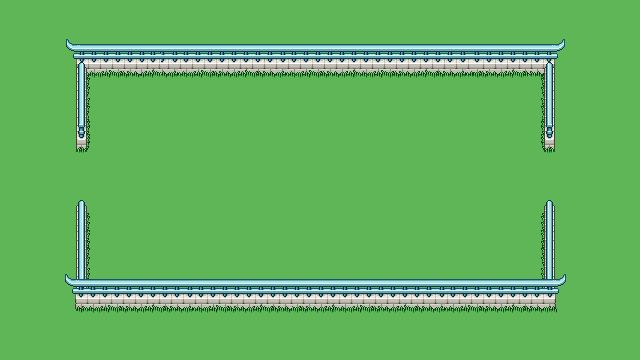 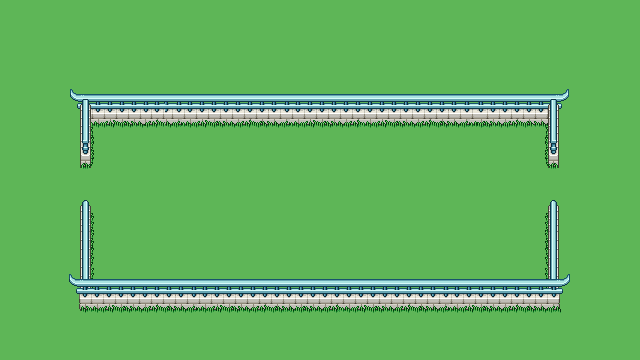 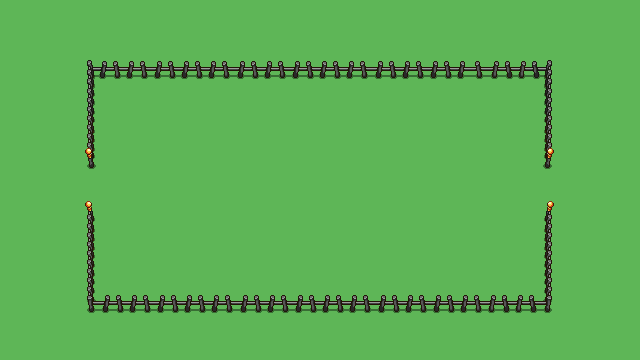 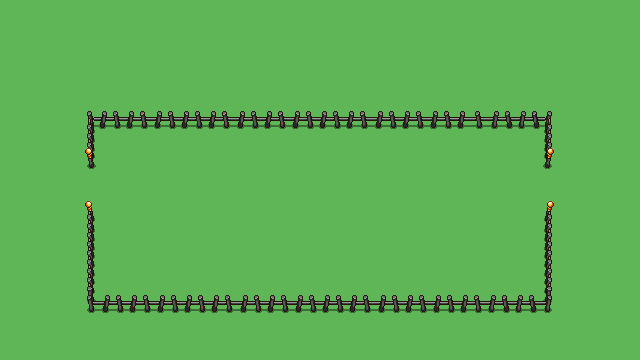 The above changes may not look like much but it makes all the difference in the engine! As you may notice, the exits are no longer in the middle of the fence, but further towards the top. This is to save Teddy a ton of work, as he had already implemented the zoning for each of this exits, and would have to manually change them after the fence resize. As such, we decided keep them slightly higher and save the work. It may not look 100% ideal but I think in the heat of battle nobody will really think much of it.

Now, here are a few more screens showing what things look like in the engine so far (using my still not fixed graphics at this point): 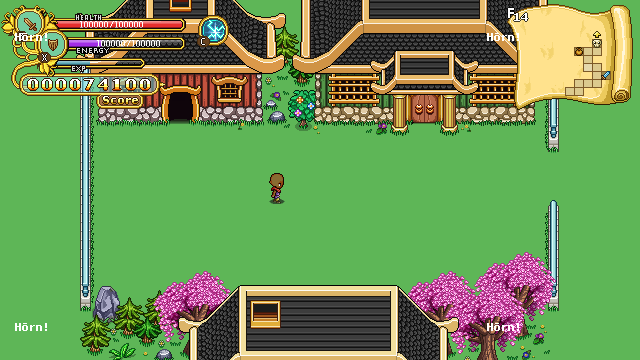 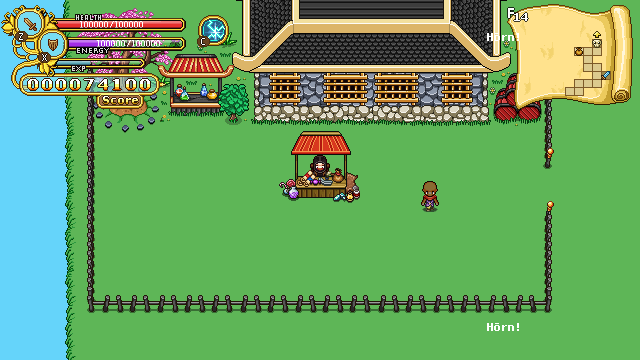 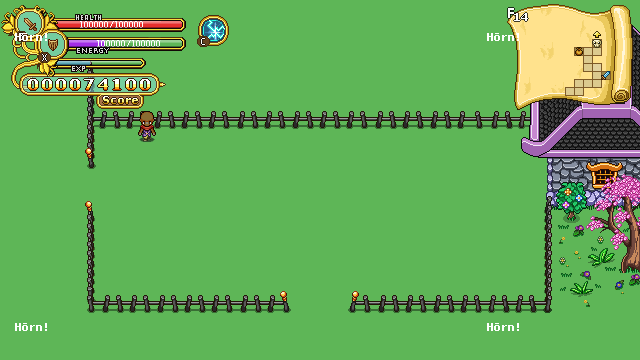 As you can see, there’s a lot of stuff missing still, but the core is getting there (it’s basically playable, just not polished graphically at all). Next up I’ll be making a bunch of decorations for the area around the “room”s: grass decorations, randomized trees and rocks, etc. Once everything is added I think this will actually look quite nice!

But before moving on to more Tai Ming floor stuff, I wanted to finish a rather important boss room for Mount Bloom’s arcade floors: the one where you’ll battle the Black Ferrets (the awesomest trio in the game, am I right?!) 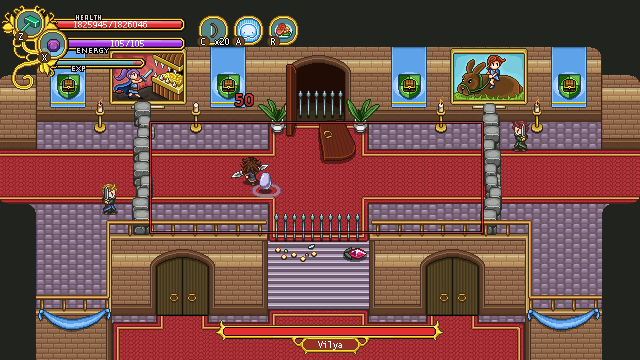 As you may know, this battle initially takes place inside the HQ, but will now be in Mount Bloom, as it’s where you’ll be at Arcadia wise. As such, we extracted the vital points of the map (the actual size of the fight area, so Teddy does not have to make new boundaries for it): 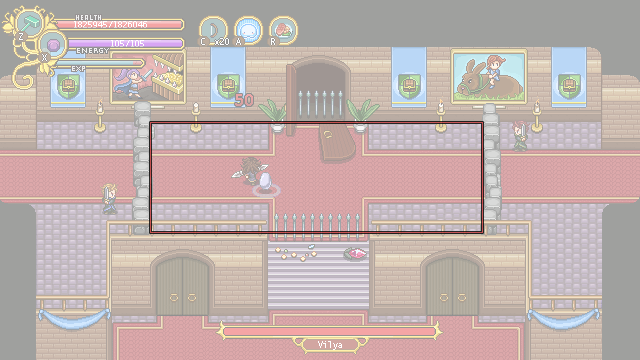 …And the proceed to make a new version of the area, set in Mount Bloom instead!

It’s kind of amazing how much smaller the fight area looks when it’s surrounded by water rather than more of the HQ, but it’s the exact same size! Teddy and Freddy will each be on the opposite end, hurling their blades at the unsuspecting player(s), just like in story mode: 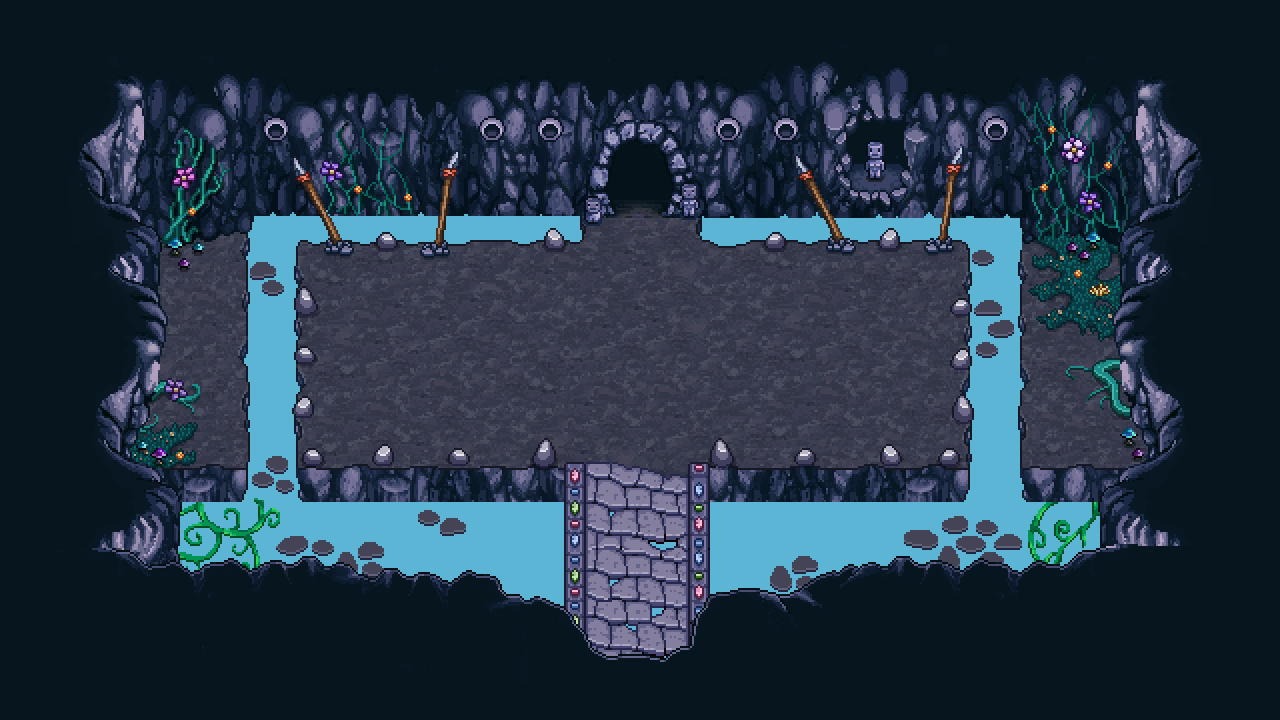 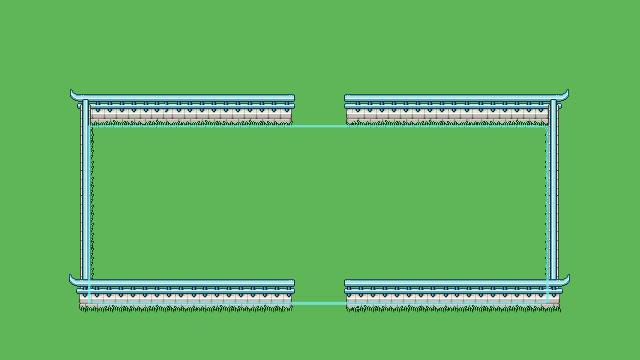 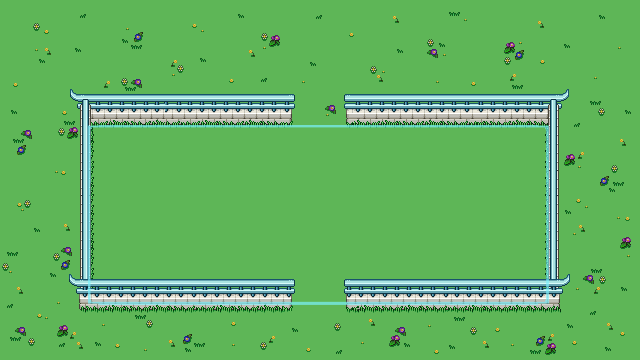 Now, we need to make sure the flowers won’t get cut off when we add water or mountain walls, as seen below (fixed by moving the flowers slightly away from the border): 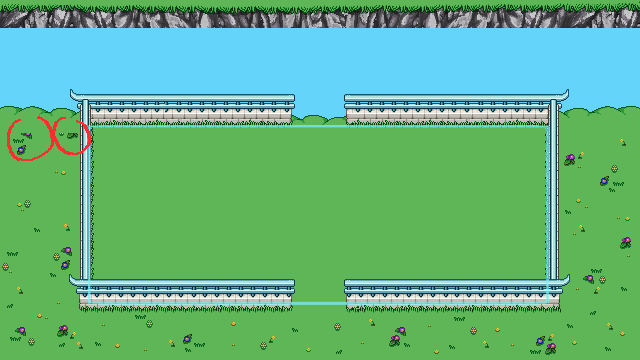 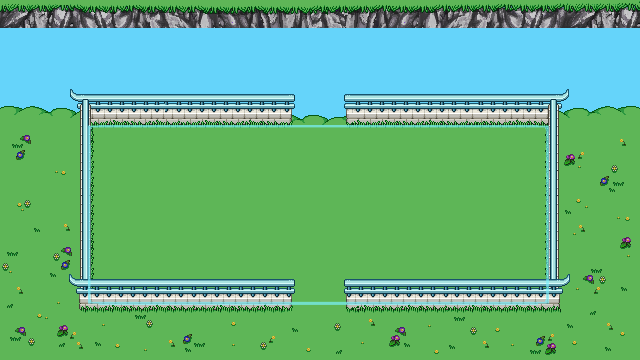 In order to make the edges of the water look more decorated, we put a bunch of the flowers directly on its sprite: 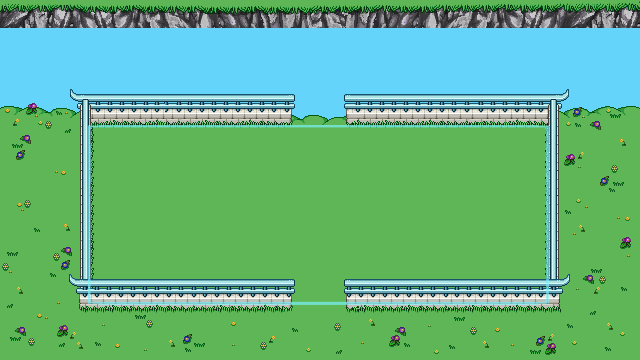 And now, the most important stuff: making a bunch of variations for trees, rocks and other decorations that will appear around the fences when there is no water or mountain to cover ’em up. I’ve made 6 variation of each side: three for when there’s an exit in that directions, and three for when it’s closed (as seen in the two examples below): 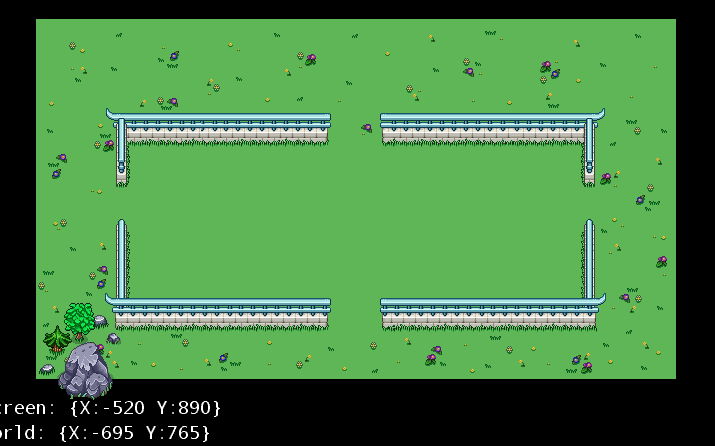 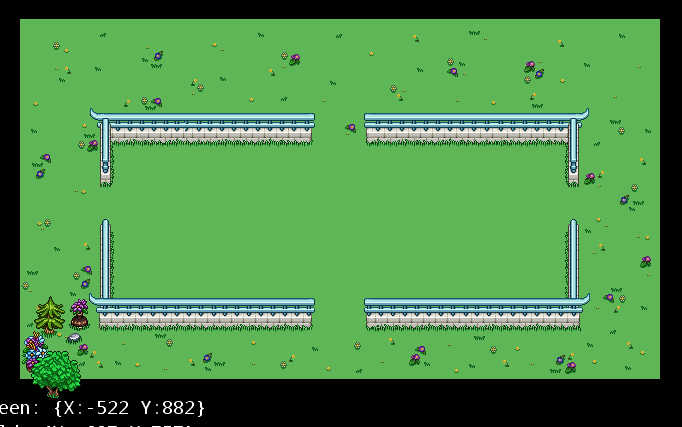 When a horizontal fence connects with a vertical one, there also needs to be a number of corner decorations, so I made three of those for each corner as well, two of which can be seen below: 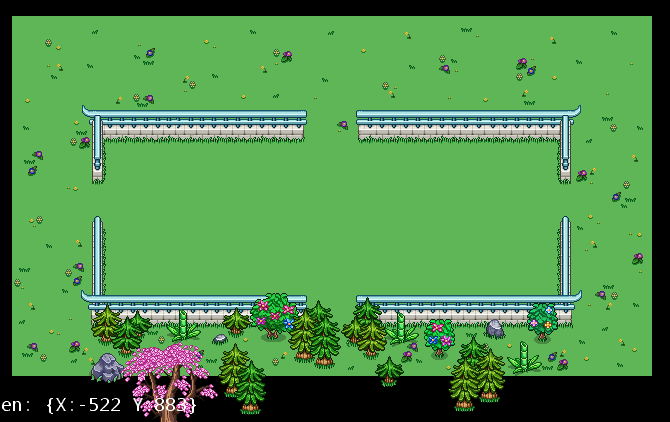 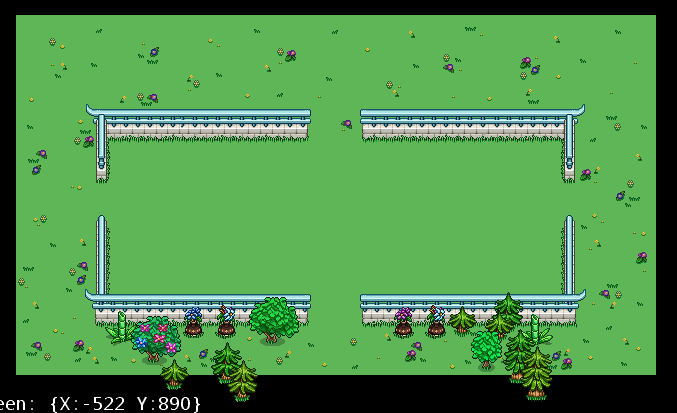 Mixing and matching these decorations along with water, mountain walls and the buildings I made earlier will surely make this area look a whole lot different each time you play it! I think as far as Arcade floors go, these will probably look the most epic in that way, as each time you get there will truly be a new experience graphics wise.

Now I just need to make a bunch of interiors (you’ll battle through buildings as well), and turn everything into its past version for when it’s time for the time warp!

As for Fred’s work this week:

Even more fishies! When all this is said and done we’ll be able to make a fishing game… Wouldn’t that be exciting?! (Maybe not…)

So while these fishes take a lot of time to complete, we hope that once they’re all available in the aquarium it’ll be worth all the effort! Plus, who knows what else we can come up with now that we have a ton of animated fishes.

If you have any ideas, feel free to share your crazy fish dreams!


Little underwater sections where you turn into a fish to get through! Could be some kind of puzzles or challenges.


OH MY GOD THE KRAKEN IS SO CUTE!!