Alright, back to business (ALSO SORRY THIS POST IS SO LATE! Scheduling got messed up again (I will set an alarm to check that it actually works, I promise)! As mentioned before, we’re at the point where we need to design a lot of interface stuff and decide how things will work together and unlock in terms of the new Arcadia rework features.

These include new interface indicator for gold, treats and curses when you’re running around inside Arcadia itself. Here we decided to combine Treats and Curses. Previously we said you could pick either Treats or Curses, and have three of each, but since then we have changed our minds: now, you’ll be able to pick and choose between Treats and Curses, but you can only pick 3 in total. It’s good to keep in mind that 3 isn’t a 100% fixed number at this point, we’ll have to try things out and see what feels good. The final number could be anywhere between 2-5 (is my guess, anyway).

We haven’t actually decided on which specific Treats or Curses to include yet, so if you have any cool ideas, feel free to share them with us! As a reminder, Treats are features that will make an Arcade run easier, but lowers your score, while Curses make your runs harder and increases your score!

Selecting Treats/Curses at their respective NPC will need a menu of its own too, as will the Cinema’s replay feature (where you’ll be able to view past runs), the Bank exchange service (where you can convert Essence to Gold and the other way around), and Master Ji’s challenge selection (where you pick which of his shield-focused challenges you want to try). We also need to come up with the challenges the latter will have.

The Arena will mainly use the interface from Story Mode, but we will also need a menu where you can select your last three characters that reached any boss in the game and have a go at the boss again. Here, we’ve decided to keep the Multiplayer mini-games, while the single player ones will be replaced by the boss-rebattle feature. Our reasoning here is that it might be fun to be able to challenge your friends to mini-games in the Arena without having to start Story Mode (since we have the arena anyway, you know), while the single player portion of the Arena doesn’t make as much sense to keep and works better in Story Mode alone.

There’s also another matter we need to discuss, and finalize: whether the build time of unlocked buildings will count IRL time, the time you play Arcade runs, or both. Last time we talked about this we could not decide, so now’s possibly your last chance: what would you prefer? To wait a short while regardless of what you do, to have to play arcade runs for the buildings to finish, or to be able to shorten the waiting time by playing arcade mode?

Let us know what you think!

So, time to get those new interfaces going! First up, the main interface as you run around Arcadia. Here’s the old version of the interface: 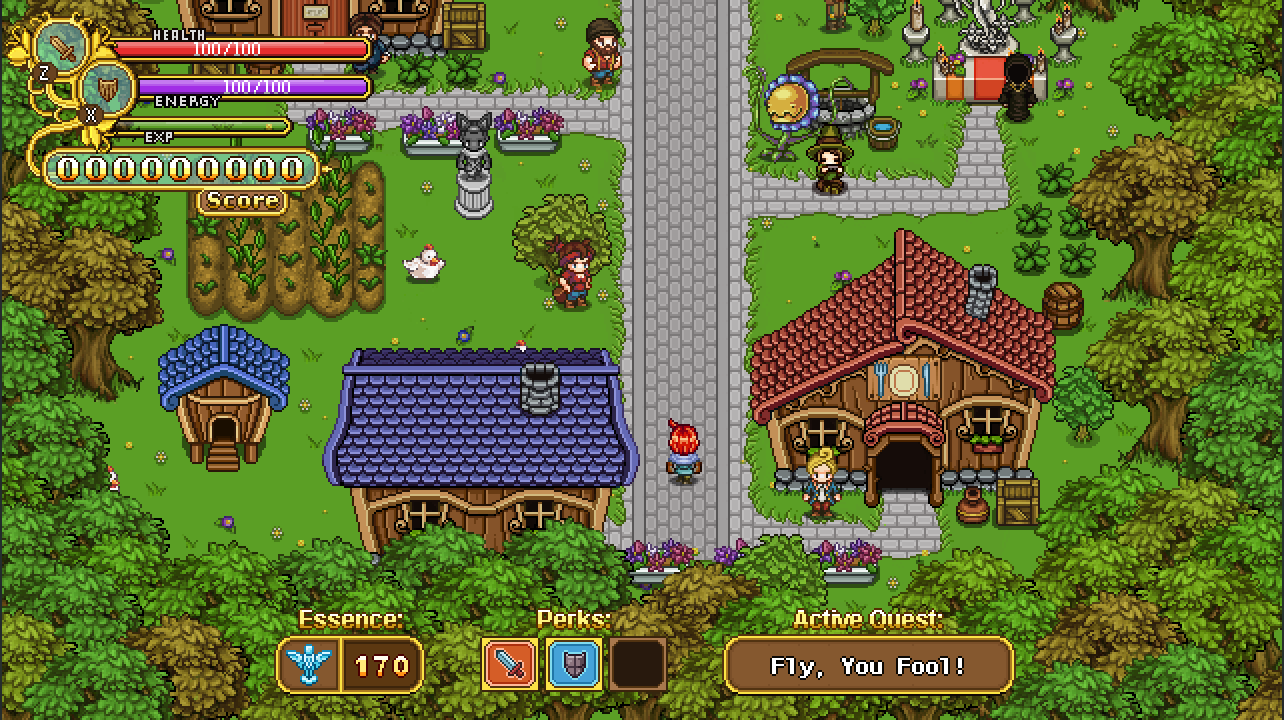 And here’s a basic suggestion with a new gold indicator and slots for Treats/Curses: 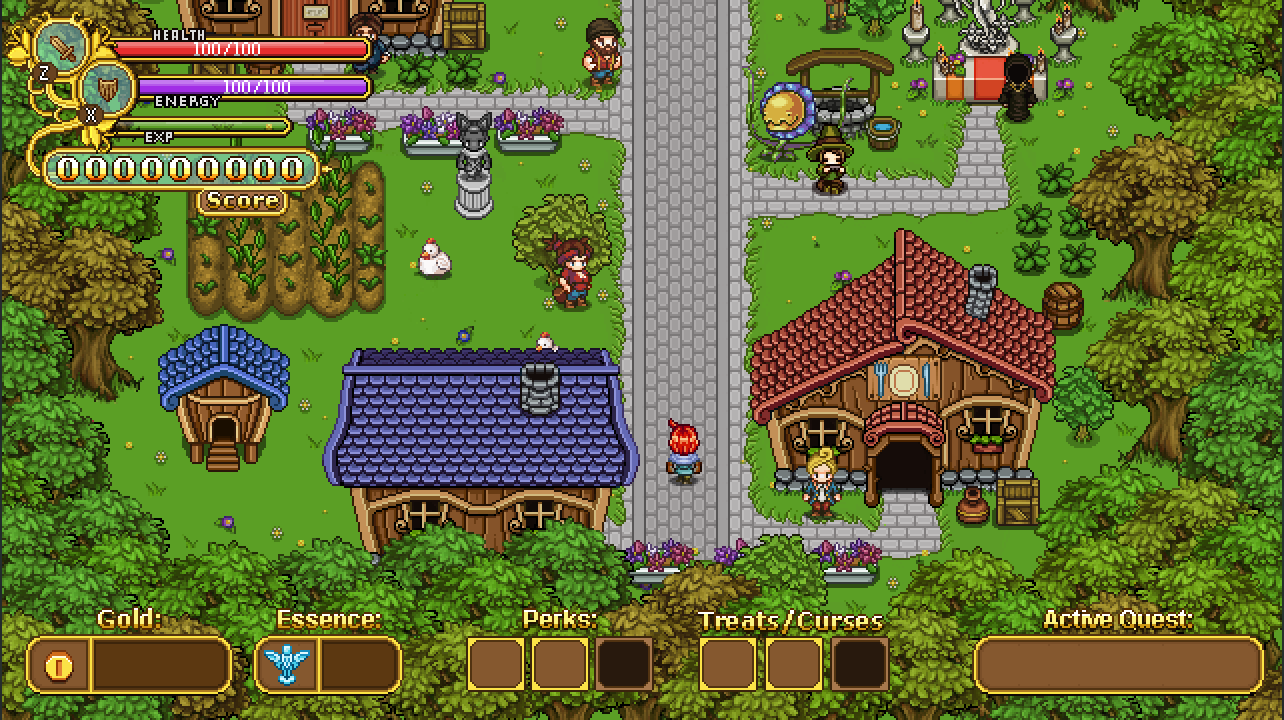 Now, the treats and curses will affect your score multiplier by a certain percentage each: either they’ll increase your score or they’ll reduce your score. More score equals more rewards (and a higher place on the high score list!), so we felt it was important to include this in the interface somehow. Here’s a quick sketch featuring the score multiplier increase both next to the score and next to the treats/curses: 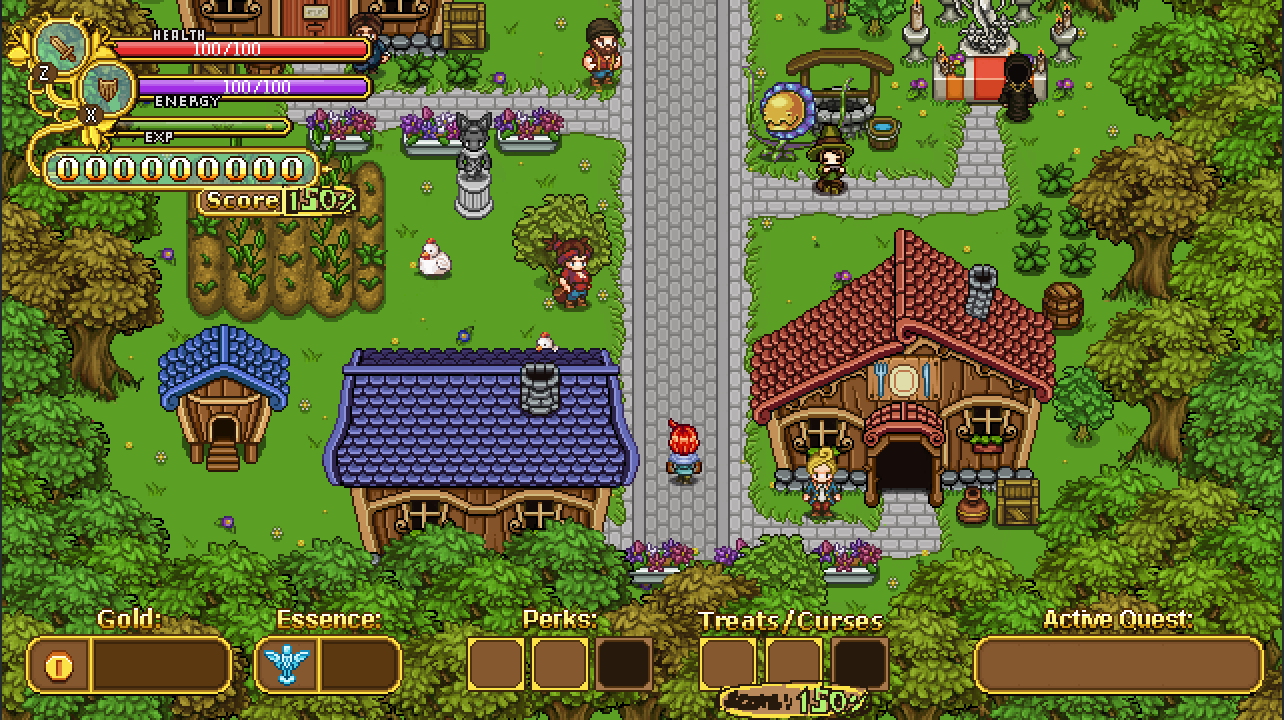 While we liked the idea of having the percentage show next to the score counter (that way it can show all through your run as well), we weren’t sold on having an exact copy of it next to the treats/curses. Instead, we thought maybe we should separate them and show how much each of your curses or treats actually subtract or add to your score:

As of now, we still haven’t decided whether we want to include the above version or just keep the cleaned up score multiplier next to your score (as seen below). Do you think you’d prefer to see how much each score adds/subtracts, or is that unnecessary information that only clutters up the interface? 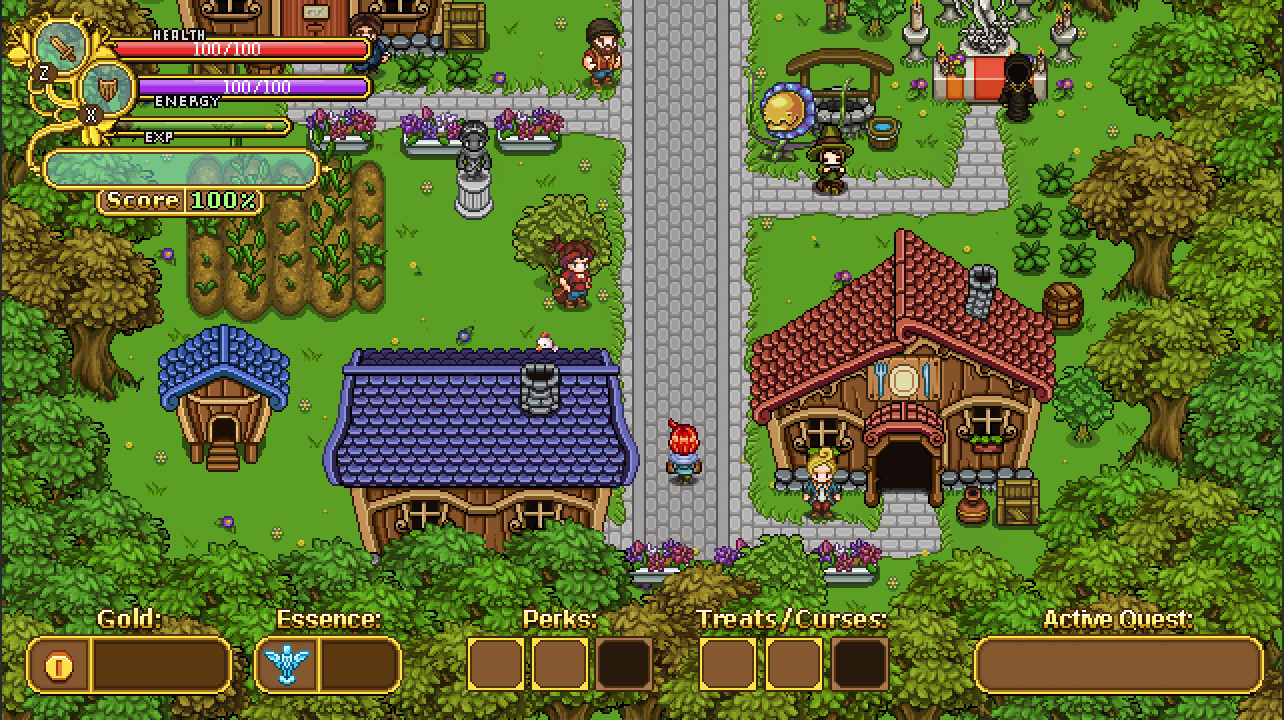 Next up, we’ll continue the interface business by taking a look at the interface of one of the more important new features: Treats and Curses! 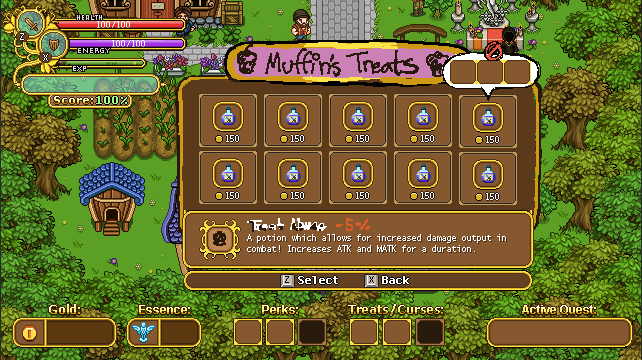 For this interface the important part is having enough room for a bunch of treats/curses, with a text box featuring a description of each treat/curse, a title bar (so you know which interface you’re in), as well as some way of letting the player know when treats/curses don’t work together – for example if you have on treat that disables all elite enemies along with a curse that makes them more likely to spawn.

In the above sketch I used the potion interface as a base. There will be a few key differences though: for one, it won’t cost you money to change curses/treats, at least not the way it’s currently designed. If you’re currently hovering over a curse/treat that won’t work with the ones you have selected currently, a speech bubble popup will appear with a stop sign, showing you which ones are incompatible. Next to the curse/treat title in the text box will be how much score will be added or subtracted to your score, in percent.

Once you select a curse, a new interface will pop up where you can select which slot you want to add the curse/treat to: 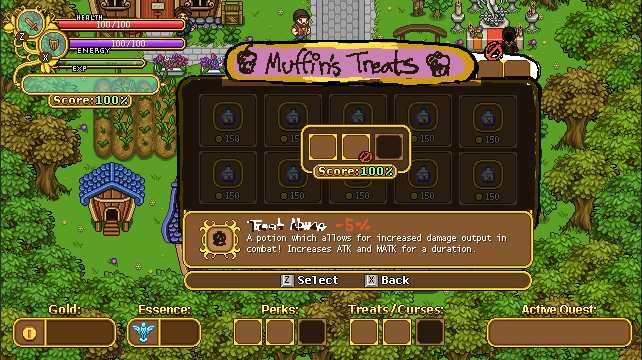 In this interface there will also be a total score counter showing how much your total score will be with your selected curses/treats. In the sketch above there’s another stop sign next to the incompatible curse/treat, however this will likely not be added to the game: instead, if you try to select a curse or treat when you have others selected that wouldn’t work with it, there will be a prompt asking if you’d like to remove the ones that are incompatible with the one you’re trying to select. If you answer yes, the above interface will pop up with the incompatible curses/treats removed: if you answer no, you’ll remain in the curse/treat selection screen.

Now, time to freshen up the graphics a bit: 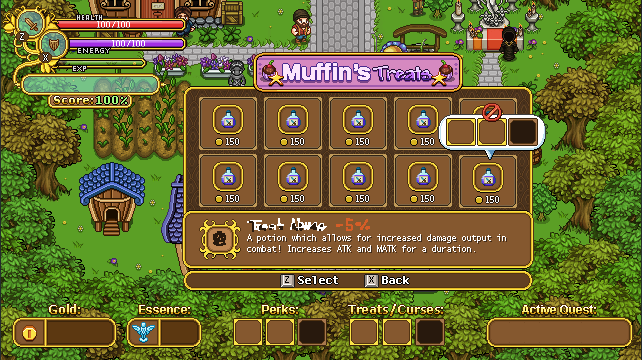 Here I’ve added some proper graphics to nearly everything: Muffin’s Treats has a title sprite, the pop-up speech bubble indicating which curses/treats are incompatible has been added, and the background is properly made as well. The text I haven’t touched though, as it will be added properly with the game engine.

Next, same thing but with Candy’s title sprite: 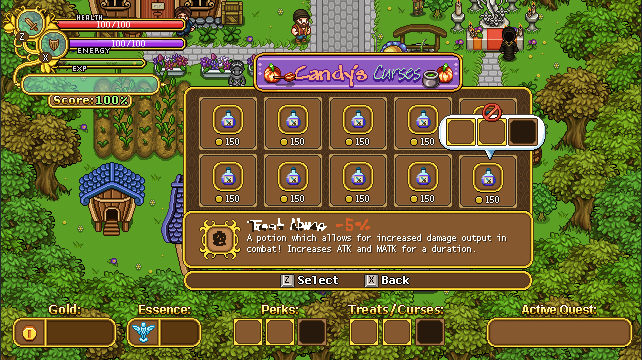 And finally, the screen where you select which slot to add your selected curse/treat to! Again, the stop sign will probably not be used the way we ended up designing things, but we hadn’t finalized that by the time I finished making the graphics: 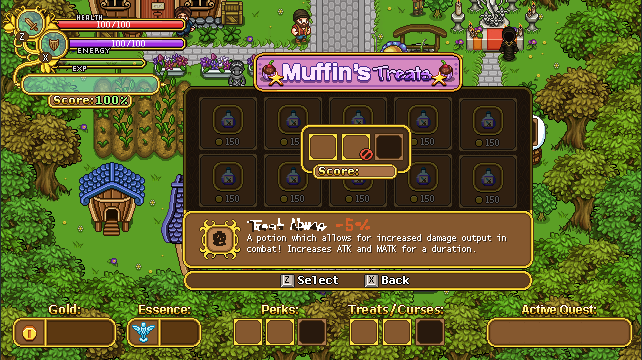 Next, a quick portrait, with and without hat:

And Fred’s section of this post features a return to the desert and more of its inhabitants! Here’s a whole bunch of the iterations for four of the characters you’ll meet in the harbor town, with the final versions inside each green circle: 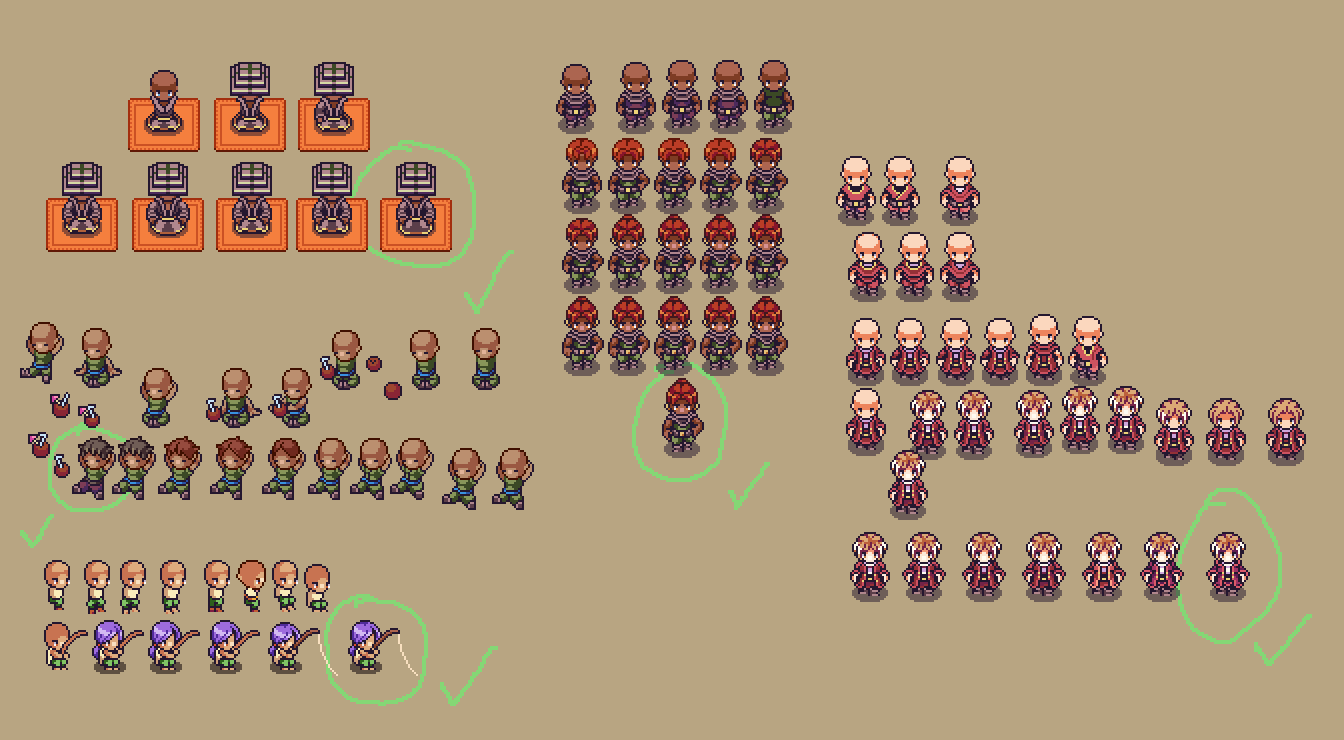 …And an animation for that poor winter fae, who has been lured into the desert by his friend! Poor thing is suffering from the less than ideal weather for a winter loving creature!

With only a few days left before Christmas, we’ll take a small break and will return on January 1st! No weekly recap next week, in other words, but we’ll make sure to post a happy holiday post to cheer you all on over the holidays :) In the meanwhile you can sneak a peek of what will be shown in the recap of Jan 1st over on my own workblog! Until then~


I think it would be great to have a curse that will not allow you to get any health pickups. Or a decreased amount.

Or treats that allow for increased drop rates of things.

Great post, been a long time follower of the game.


I believe the fairest decision would either be playing the Arcade alone for the construction to finish or IRL time + Arcade. Another solution would be to also have the Story Mode Playtime to count as well.