New week, new interfaces! This time it’s the last couple of interfaces for Arcade Mode, featuring how to build new houses and a notification window for when new NPCs are added to town: 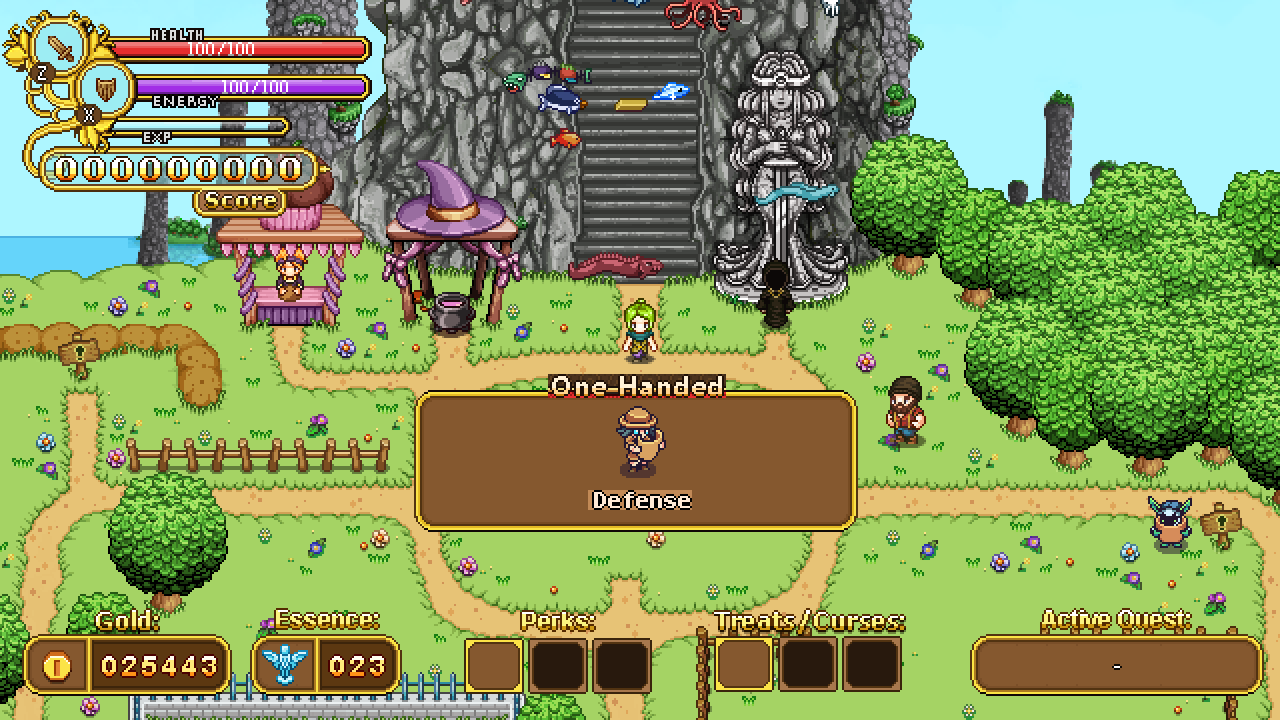 Above is the first quick sketch of the notification box mentioned. We wanted to notify players of when new characters appear in town so they know what/who to look for. Instead of One-Handed it will say “A New Face in Town”, and instead of Defense, it’ll say the character’s name. We used to placeholder text to get a feeling for how big the fonts are.

Here’s the progress of taking the box from the sketch version to the actual one we’ll use in the game:

And the final window in its context: 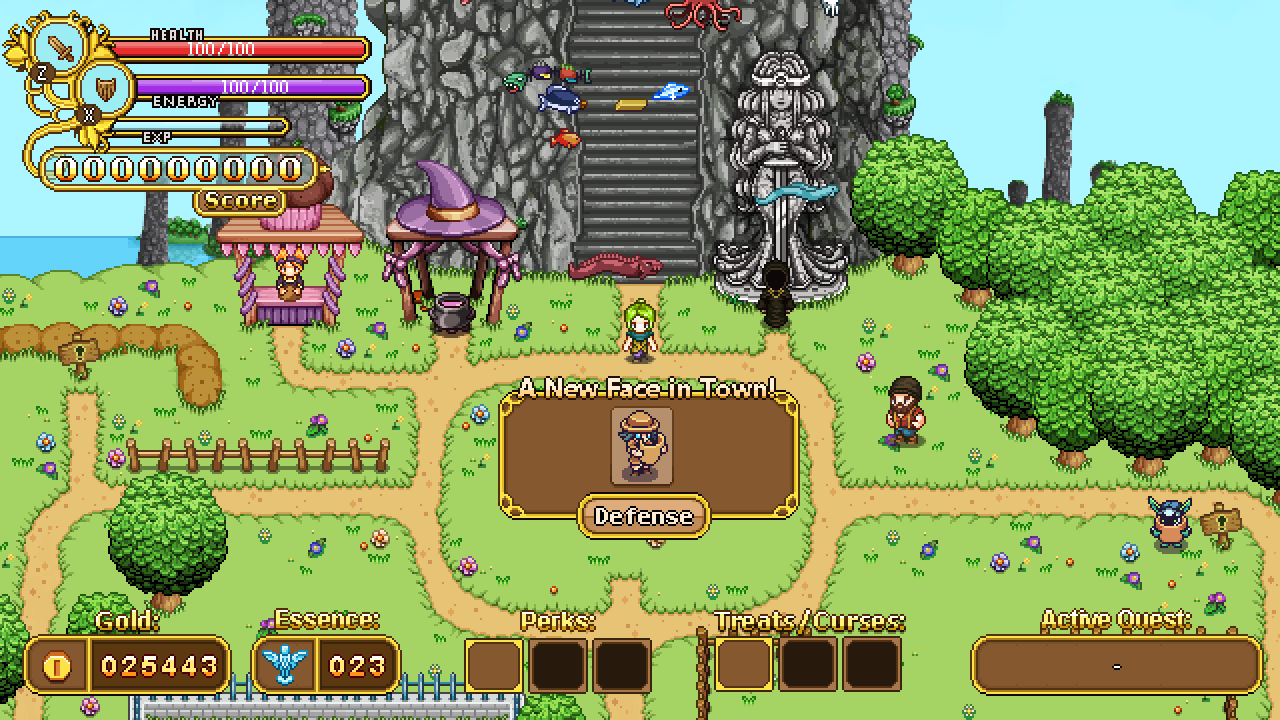 Next up, building houses. When you inspect a signpost you’ll be presented with a window where Trunk informs you of what will appear in that area and how much it’ll cost. Extremely(!) detailed sketch below: 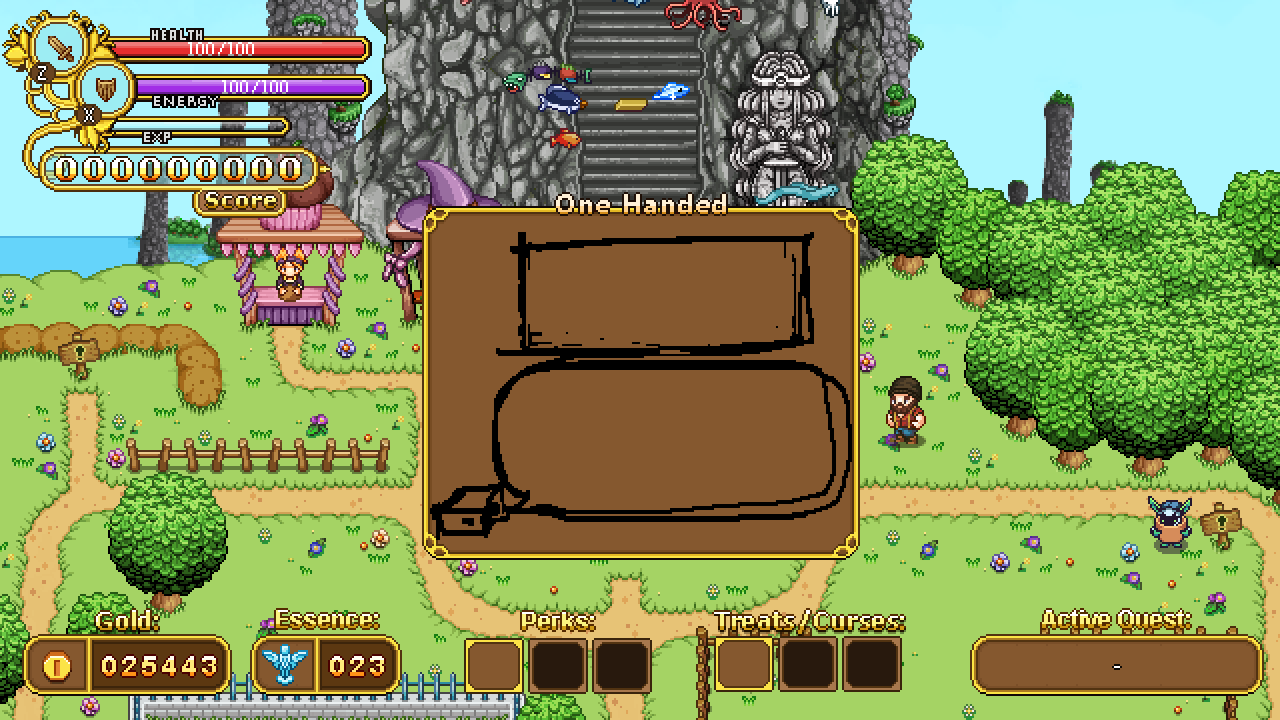 Again, bringing it from sketch to final box:

Once more we’ve used a placeholder text to get a feeling of how big text will appear inside the box. Instead of One-Handed it’ll say the name of the building, and instead of Candy’s line from Pumpkin Woods there will be a description of the house and what can be done there. The coin box to the bottom left of the window will tell you how much it costs to unlock this building, while the checkmark and x will confirm or cancel. The x will be selected by default to avoid accidentally building things you wouldn’t want. 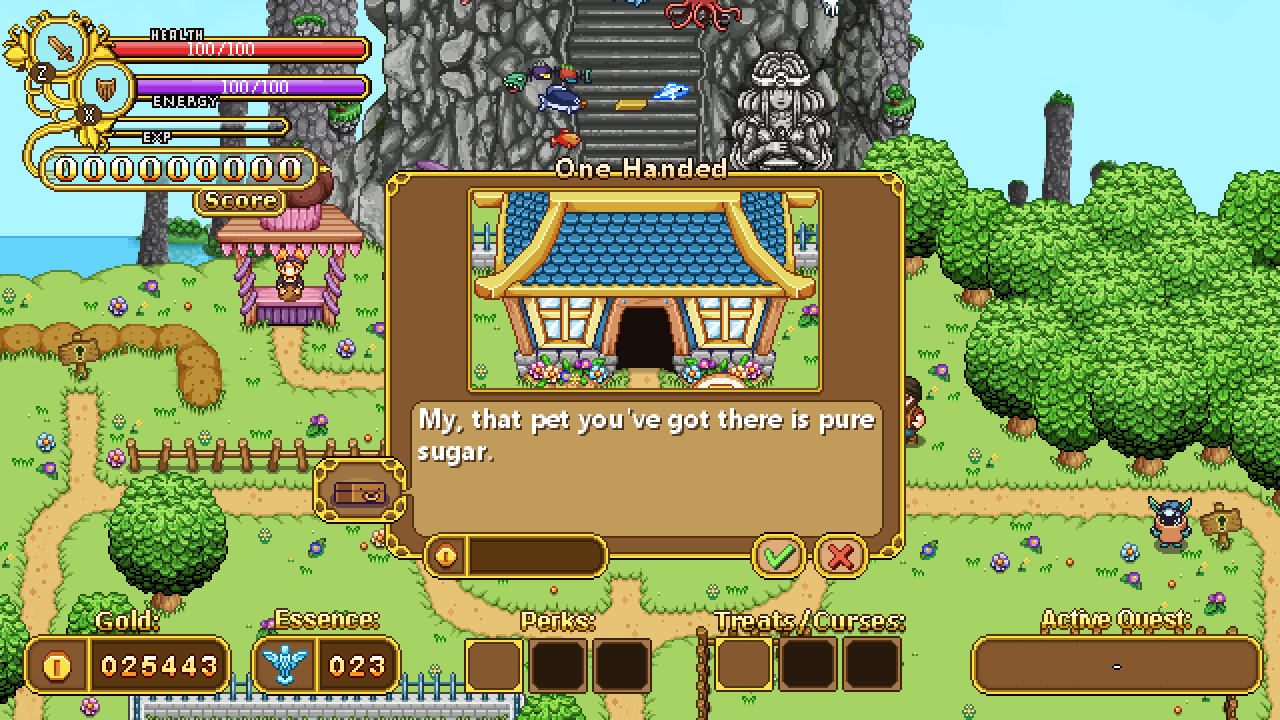 Next up, a bunch of icons, featuring both curses and Bishop challenges:

Next up, the next bunch of curses:

The first one being where the floors turn to ice, the second where you’re surrounded by flames, the third being the curse which allows higher level enemies to spawn on lower level floors, the fourth is a curse that makes you take double damage.

The fifth is the curse which makes enemies leave something harmful behind when they die (poison clouds, acid, etc), and the last one is a slightly modified version of the bishop challenge above, for the curse which either blinds you temporarily at the start of each room, or has blinding mushrooms spread across the floor. If we go for the mushroom idea, we’ll likely change the icon, but for now this is the placeholder until we’ve tried the two modes out:

Now, in preparation to move from Arcadia to the desert, here’s some small Arcadia fixes to conclude my work there (for now): 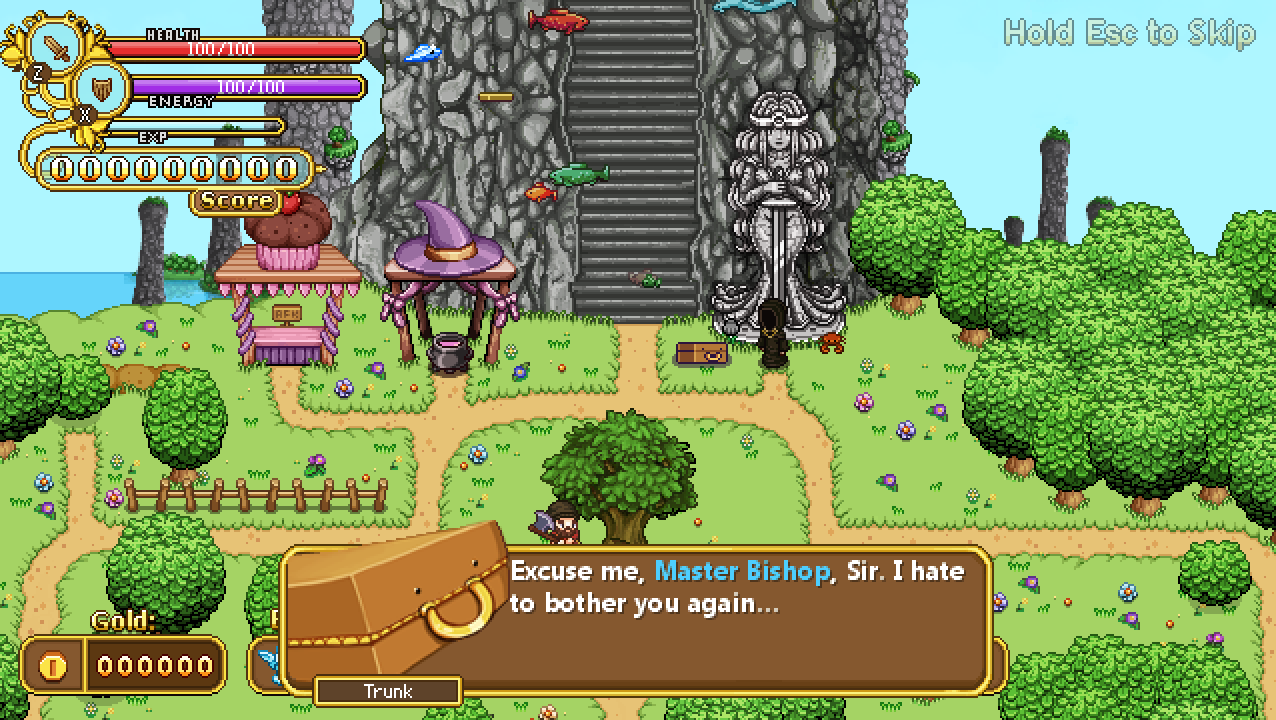 Above is a screen of Trunk talking to Bishop, during which we realized his portrait is a little too big and feels too close to the text. First mission: make it smaller! 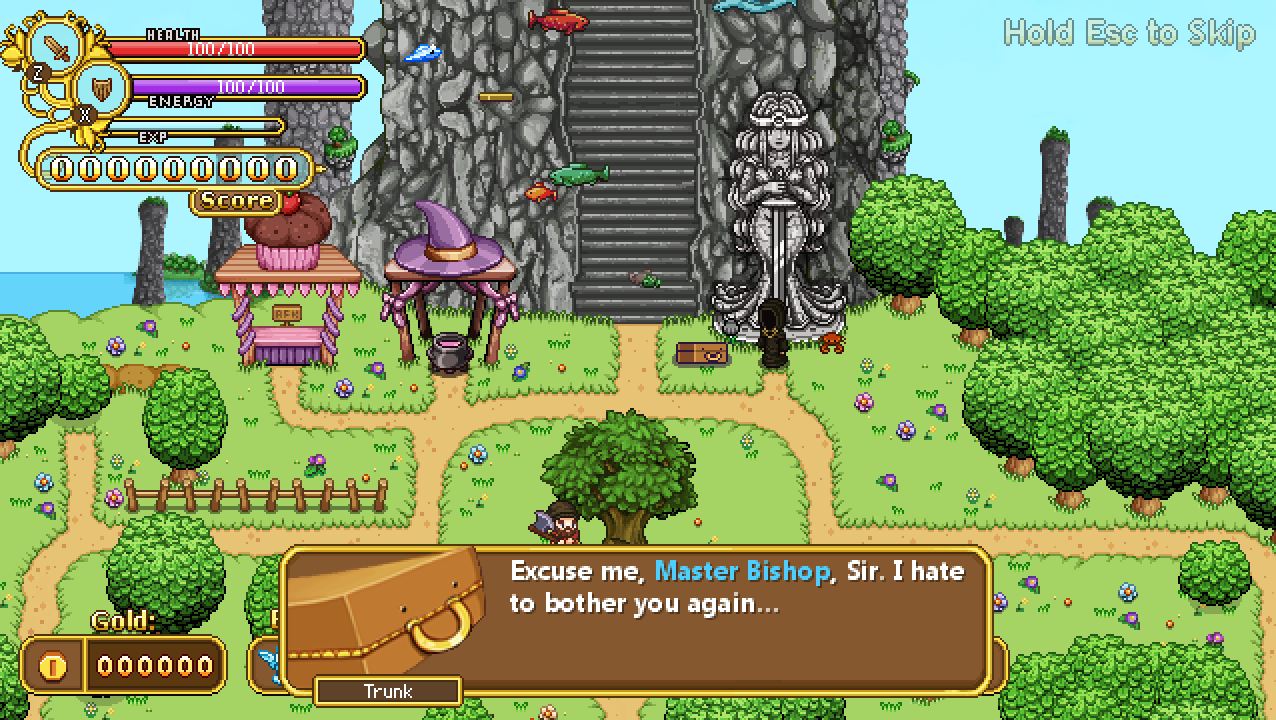 Second mission, giving him a proper expression for a special moment where he gets a little surprised to say the least: 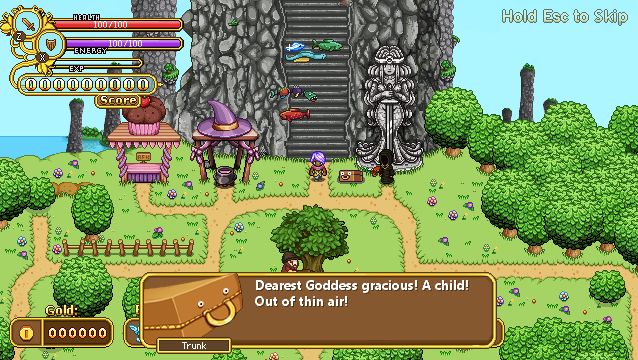 This is approximately what Arcadia will look like when you first arrive, but there’s a little something missing here: 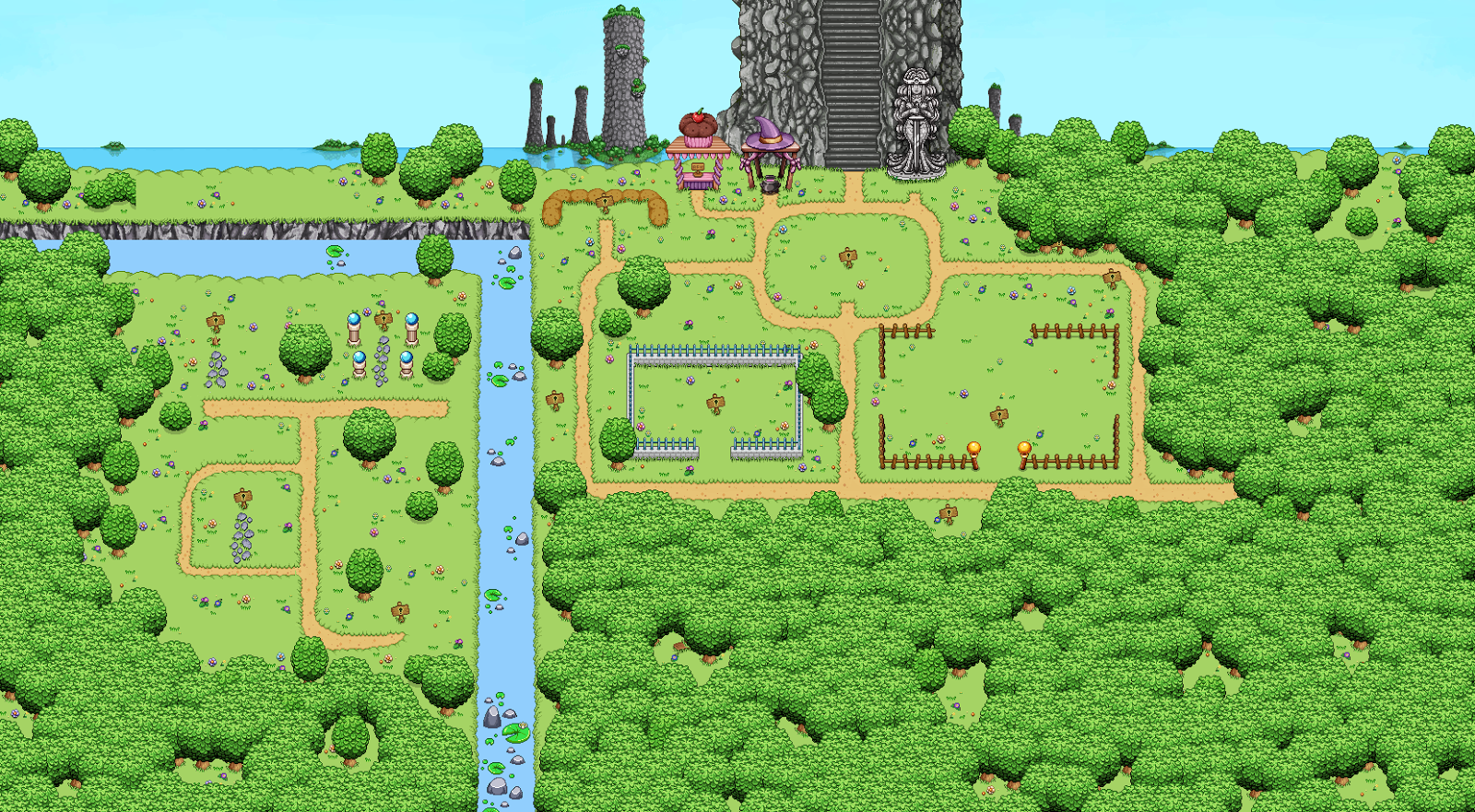 What’s that? A ruined bridge, of course! We realized it’s kind of weird that some things have already been set up on the other side of the water without any indication of how people got over, and it looks a little more interesting to have it there: 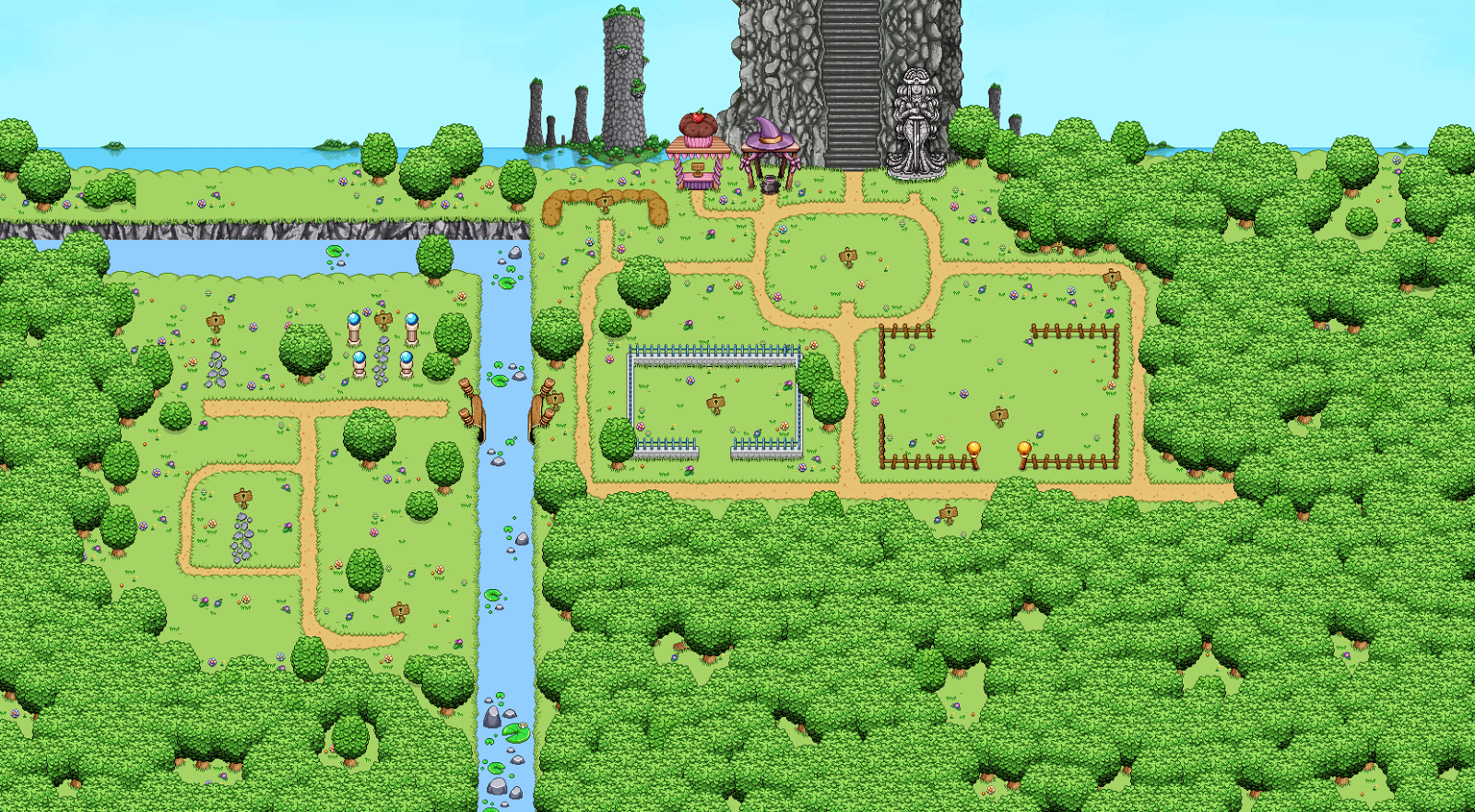 Okay, so time to move to the desert. Here we have a pathway that’s supposed to be blocked, so you have to move around the area before unlocking a way to pass through here: 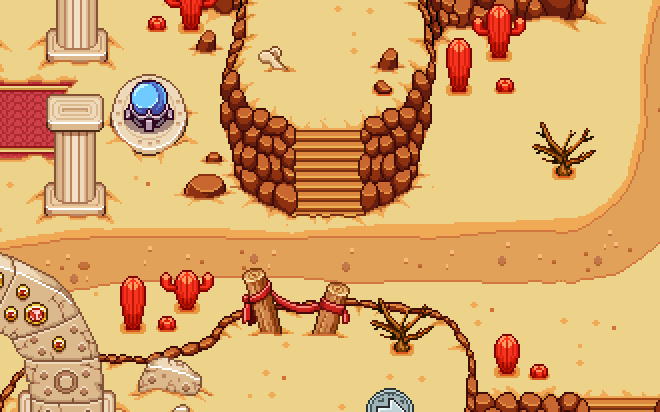 And what’s stopping you? More cacti! Bigger ones, this time. Time to make a bunch:

And here they are, in their rather huge glory! We’ll probably add a bunch of these here and there to keep you from being able to destroy everything (most other decorations – the smaller cacti – can be cut down by the player, while these cannot): 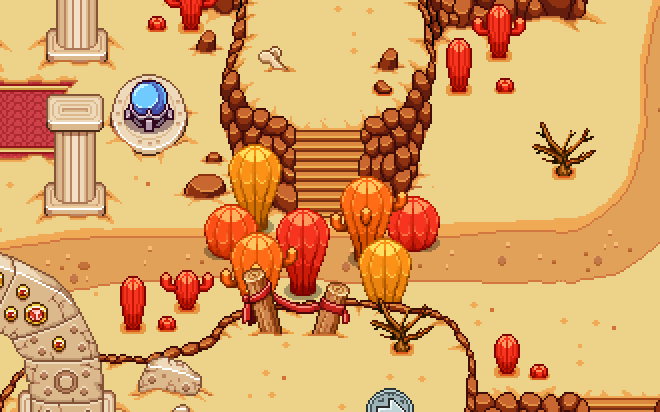 Next up, another place that will be blocked until you’re actually supposed to get here: 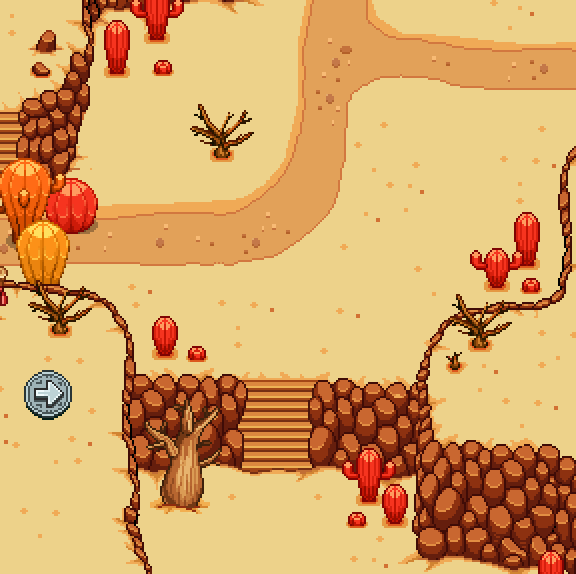 Here, we want the stairway to be blocked by a couple of archaeologists who have made interesting findings in the area. This serves both as an introduction to the fact that there will be archaeologists here, as well as a temporary way of blocking your progress until you’re ready for the desert storyline:

(Of course I couldn’t leave the stairs looking as empty as they did, or you wouldn’t really buy why the archaeologists are interested in it..) 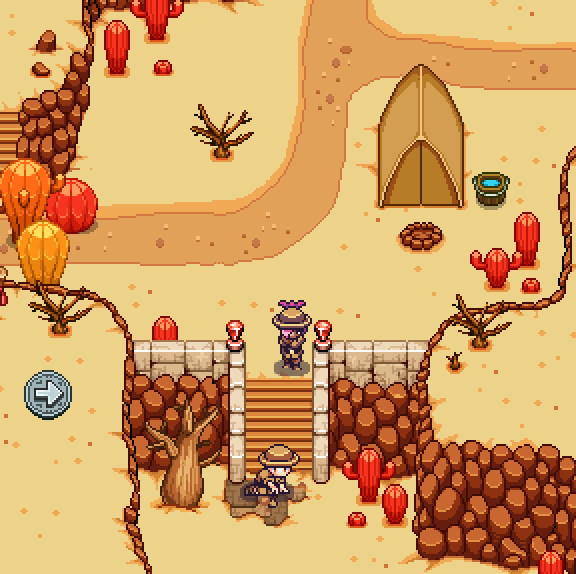 And with the new, more epic looking staircase, this one looks rather boring in comparison: 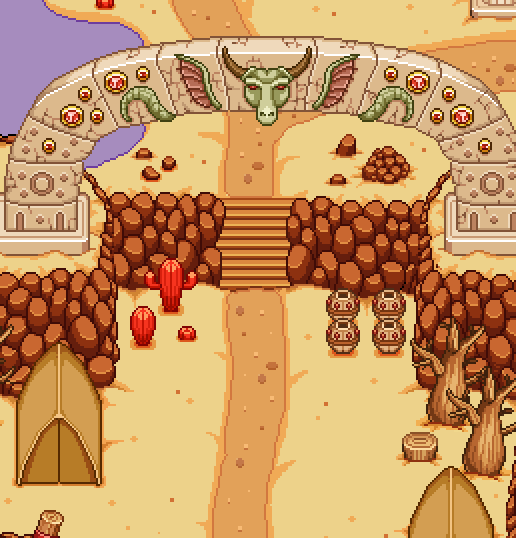 Time to fix the problem: 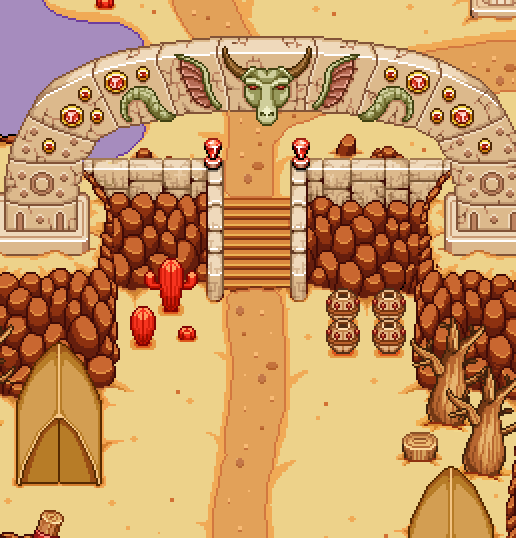 Next up, another portrait! As Fred keeps making new NPCs needed for the upcoming quests, I make the portraits to match. This time it’s another archaeologist, consulting a map. Sprite below:

As for Fred, this week he has been working on finishing up the vegetable lineup from last week! Here they are, in all directions:

Needless to say, these fellow will of course be animated as well, bouncing around in a cute way: 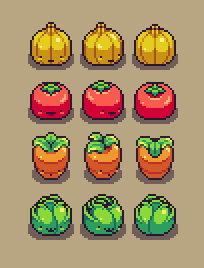 And where’s there vegetables, there’s a garden, right? Here’s a gardener, pulling up some rather small and sad looking vegetables in comparison to the lively one above:


The desert characters look really amazing, but I’m a little concerned at the yellow of the desert at the moment. it’s a bit… bright and pastel?

Also every time you post an animated gif, I fall in love with this game all over again. I’d be so hype for a pack of all the gifs in one place on transparent backgrounds –

My streaming friends and I like to pop a little animated gif in the corner of our twitch overlays so even if there’s no motion on stream viewers can tell that the feed is still working. Your artwork is some of the most charming I’ve ever seen. (people always ask “what’s that from??? ” when they see a character they don’t recognise – so I guess such things would help raise awareness of your amazing game.)