This week it’s time to start work on the upper right corner of the desert town, featuring the market area! In this first video, I’ll be making the first market stand which will serve as a base for the rest. The first one here belongs to someone selling jars: how exciting. …Or maybe not! 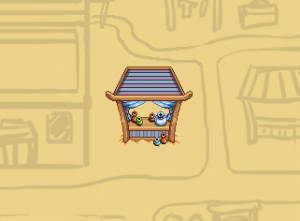 In the second part of the Marketplace, I’m making a bigger stand featuring three different sellers: one who sells weapons, one who sells potions and one who sells shields. A little more useful for the player, compared to the previous one, perhaps :) 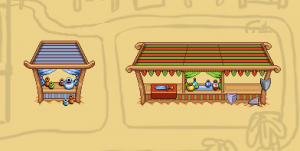 Before continuing on with the market, have a portrait! This one is of one of the armwrestlers from two weeks ago:

The final part of the marketplace means making three new stands, one for carpets, one double for hats/accessories and one for souvenirs! Also changed the color of the jar stand to further separate the stands from one another: 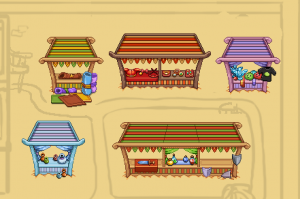 Meanwhile, this week Fred has worked on a bunch of NPCs! Not only will there be an autumn fae bandit leader in the Saloon, you’ll also get to see a couple of old friends(?), who may or may not be too excited about running into you again:

In the desert town more NPCs are appearing as well, and here’s one of them, a swimmer enjoying the clear water:

As Teddy continues to implement Arcadia Rework stuff, one or two new animations were requested as well. Here’s an animation featuring the gate to the farm, which can be either open or closed. If it’s open, the animals you keep at the farm will be able to roam around the entire map, while if it’s closed they’ll be kept inside the pasture: