Warning! This blog contains spoilers for the upcoming parts of the game, if you wish to be surprised, stop reading here!

The ghost ship plans continue to unfold, and the next big things we’ve decided on is to take the player on a strange dream, caused by the ghostly presences on the ship. In this dream, you’ll find yourself back in Startington (?!), but it’s a quiet, somewhat “wrong” version of itself. Here you need to solve four different challenges in order to find your way back to the ghost ship and continue on your journey.

There will be things in this dream referencing events that have happened in the game this far, with each building in Startington holding its own challenge. In one, you’ll need to battle a ton of slimes searching for that one card, in another you’ll be pressured to show your skill with the shield. A third urges you to remember you friends, and a forth the dreams you had for the future.

Needless to say, this will be a slightly very surreal world, and we’ll be hard pressed to make sure things have just the right amount of eeriness. We’ve had a ton of crazy, creepy ideas for this part, but our intention isn’t to turn into a psychological horror game – we just want approximately 5% of that feeling!

Right now we’re still undecided exactly how this place will look graphically – we’ve got ideas ranging from having it be just regular Startington (without the people – and probably without the song, making it a too quiet, too still version of itself) all the way to going full sepia-toned, dark, with shadows and mists lurking around the edges of the screen. We’ll see where it all ends up, and here I think we’ll need a lot of help from you guys as you test it out in Frontline.

After the Tai Ming storyline, things have taken a turn for the darker already, but as I said, we don’t want it to go full horror. It’ll be very interesting to get this right, but I think and hope we will!

Now, more places implemented means more places that need fixes! Here’s a bunch of changes we’ve decided to make since the desert started getting into place.

First up, closing off one of the caves. Previously we wanted it to look open, but since there will be a map change between them, we felt it’s more consistent to use the regular cave doors:

Second, we realized if you manage to get out of the cave exit to the right on this map, you’d be stuck on this plateau forever (there’s a jump-down inside the cave, so you’re unable to go back that way… oops):

Some detail changes to the wall here, making it more consistent with how it looks inside the city. Keep in mind most of the wall will be offscreen:

Same thing here, I’ve changed the texture of the wall and made it more consistent with the size inside town. Also edited the path to align better after you change screen: 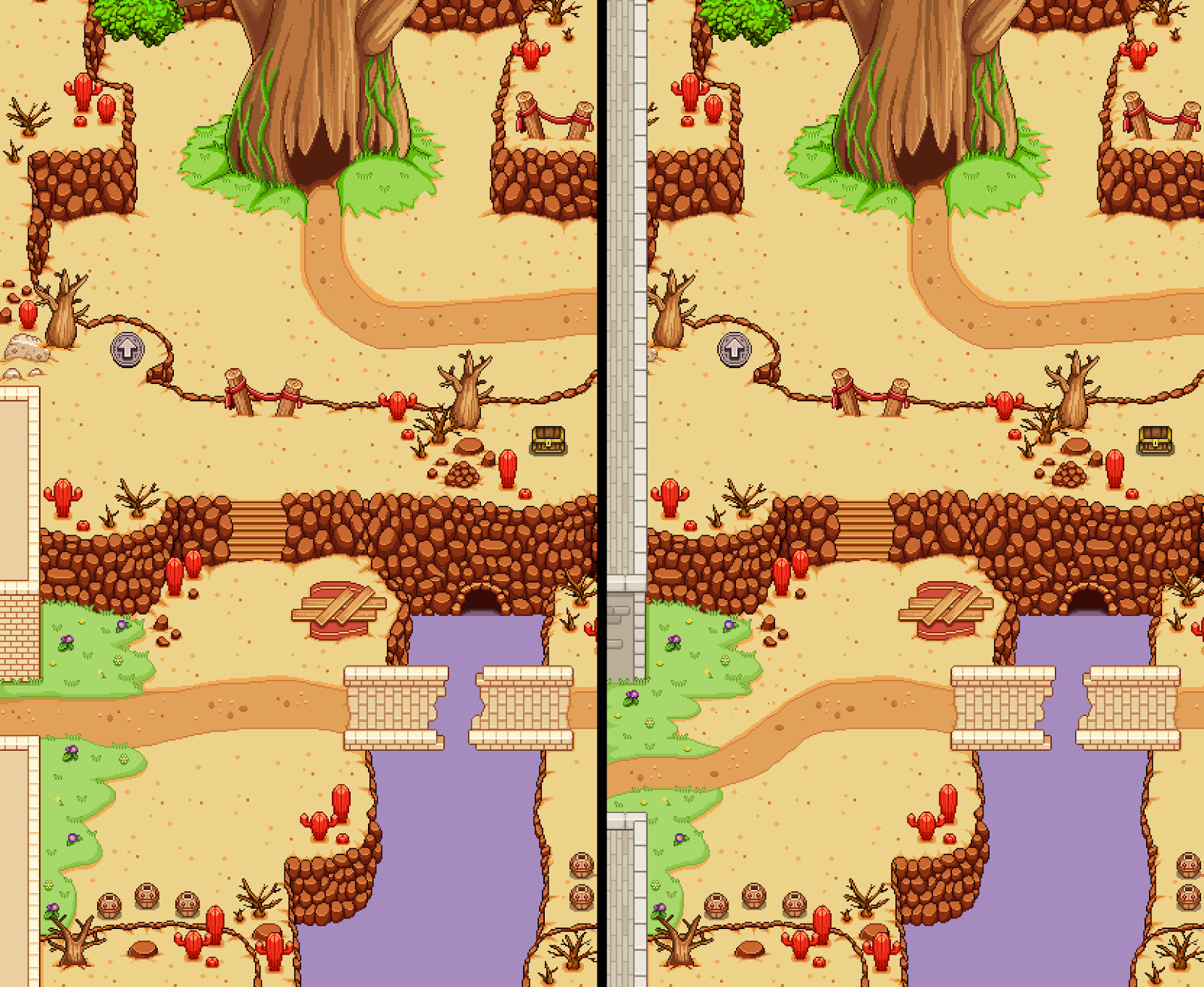 We’ve also added a slight bit of decoration outside the number cave, which will have magical flames as well once Fred has used some of his animation magic:

Finally, as we were looking around the NPC folders while implementing the desert NPCs, we realized we made a collector’s outfit for Sally a long, long time ago, but forgot to add it. We’ll remedy this in time, and in preparation for that I made a recolored version of her sprite, featuring her Collector uniform:

And now it’s time to start the second room of those Desert Ruins! There’s been a lot of talk about the Ghost Ship so it’s easy to forget we’re still not done with the desert, haha. This place is where you’ll battle the Solem Boss, and have an Indiana Jones-y cutscene! Let’s take a look:

It’s all pretty bare so far, but the video got long enough already. In the next part, we’ll continue working on the upper part of this map, where a treasure lies waiting! 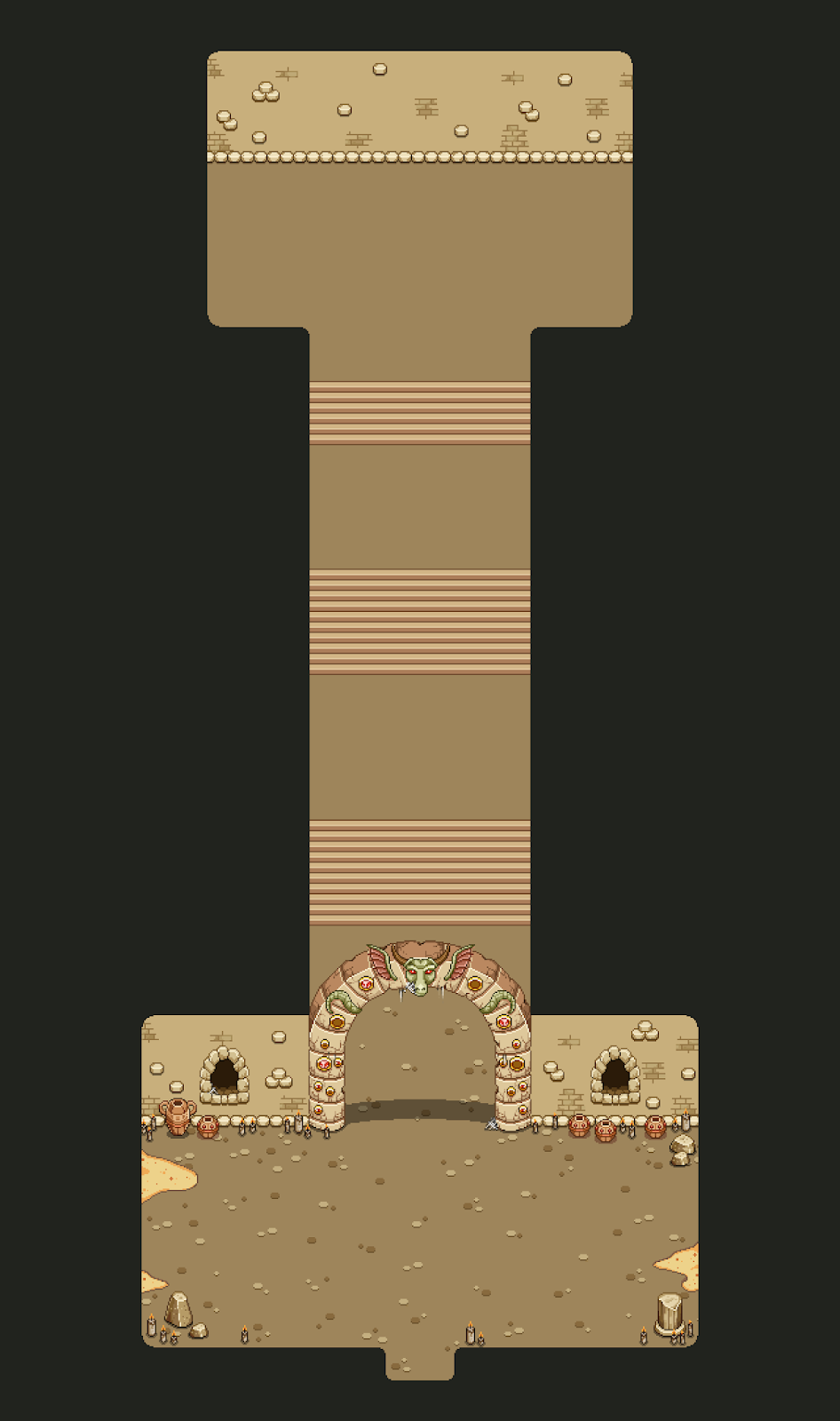 As Teddy has started implementing NPCs, both me and Fred were in for a surprise. Not only were there NPC sprites made by Fred that I forgot to make portraits for, there were portraits of NPCs that Fred forgot to make sprites for as well… Silly things happen when you work on multiple parts of the game at once!

In other words, it’s time to start mashing out a couple more portraits, so for a while there will be two presented every week once more.

This guy here is someone selling souvenirs in the Desert Town, though by the looks of his outfit, I wouldn’t be surprised if his real job was to be a Collector:

And finally, we have the ghost scientist I think I mentioned before – this person will appear in the lab in Evergrind City in the beginning of the game, where she’s investigating the spirit world. Later on, she’ll play a part in your ghost ship journey:


There is a lot of different ways to use Startington in a way that’s psychologically eerie, but not “scary”. To be honest, I think having this particular scene be silent wouldn’t work as well.

Remember that music is the most powerful tool in gaming to help invoke emotions from the player. So, when the music track a player is used to hearing sounds “wrong” and “off” even if it’s intended to be, the person playing the game will FEEL like something is wrong and off as well because it’s “not supposed to sound like that” even when it’s on purpose. Having the scene silent may just feel like something is MISSING, rather than something is WRONG or OFF. In order for silence to pull off the horror effect, something needs to be foreshadowed that something wrong may be about to happen and it’s generally used as a suspense tool for dread rather than actually making someone feel “wrong” or “off” as I described.

Startington’s theme is actually a pretty good theme to do this kind of psychological eerie horror, because normally it’s a calm, relaxing theme (and place) that makes you feel at peace and, being one of the first themes you hear in the game and the first location, that means it’s quite remember-able but the player probably won’t normally have heard or seen it in a while. You can use that to your advantage because that means it’s quite easy to manipulate and toy with the player’s memory in this kind of way. Distorting what is normally a slow and serene track is an easy way to get a creepy tune and even better when it’s one that you know isn’t supposed to sound like that.

There are lot of ways to manipulate music to sound “wrong” even though its all intentional. My personal favorite method is by increasing the speed and/or pitch of the song veeeery gradually over time; only for it to reset back to normal during when the song loops. Sometimes this can be subtle enough that players don’t even know the song’s pitch or speed was increasing until the sudden resets makes them wonder “something didn’t sound quite right just then”.

Just as an example, I did this with the Startington theme just to show you what I mean (video is unlisted): https://www.youtube.com/watch?v=ncMy92UUPgk&feature=youtu.be

This was done in Audacity just by increasing the speed of the song by 1% every 10 seconds. Someone with proper editing tools (and knowing what they’re actually doing) would be able to do a better job at getting the effect done. This was just a quick 30 second edit but even still, you can still hear that something is “off” about the song, and you can easily adjust it to be more subtle or more obvious as you please (probably with more frequent but smaller doses of speed/pitch increases).

And there are so many other methods than just this one of course:
– You can have a note sporadically reverse at random intervals. Our ears don’t quite know how to perceived reversed instruments because they’re not natural sounds. So it sounds very off-putting.
– Instead of gradually changing pitch, you can have some notes just randomly be off key; like something is trying to copy the music but is unable to properly replicate the real thing — the music itself feels fake. Kind of like comparing how a fake trading card is to the real thing. You can do this manually or even program it so it’s actually REALLY random and it will never sound the same twice for any person.
– You can have the entire track speed up and slow down with pitch matching it with no actual pattern. Again, you can do this manually or program it to be actually random.
– You can have notes gradually fade and disappear, leaving the song a shell of its former self. You can go a step further and have the few instruments that remain begin to transform into something darker, more sinister and twisted, too.
– You can go meta with the entire concept, and make the game become ‘glitched’, either through skipping the song, leaving notes hang indefinitely, the use a bit crusher on a string of instruments, etc.
– You can have instruments go off rhythm.

And probably a lot more methods I can’t think of on the top of my head at the moment. You can use one or any combinations of these to pull all sorts of effects off to make the tone of the music shift dramatically.

Doki Doki Literature Club did this kind of thing very well at taking music the player got used to and then purposely messing it up so the player knows something is wrong and off even when everything looks normal. I’d suggest checking the game out for inspiration and ideas on how to pull psychological effects with the music off.

Either way, I hope all of this blabbering I’ve done helps you decide how you want the scene to go in some way! :D


Thanks, Sairek! Some good thoughts in there for sure! :)