Time to make some more portraits for the flashback orbs you’ll be able to find throughout the world in that upcoming stable patch (and the frontline patch that naturally will precede it). Perhaps you’ll be able to recognize this silly young girl, and imagine what awesome trio will be featured in the next orb we’re making:

Next up, unsurprisingly… Two young gangsters in the making, and now I think you most certainly can start to guess who will be the subject of this flashback orb:

However, there’s one more character involved in the events that will be portrayed…

Hold your horses. Mandrake. Out of all characters, why Mandrake? What did he do in his young days to warrant a portrayal in a flashback orb? What’s his connection to the Black Ferrets? Has he really always looked this ridiculous?!

I guess y’all better find this memory orb and find out (once it’s been implemented) :D

Alright, so previously I’ve mentioned three flashback orbs that will be available, dealing with Zhamla finding his first card, Young Dad meeting equally young Ivy and Charlotte, and Charlotte speaking to the winter elder after saving Santa Fae from the legendary Goblin King.

Since then we’ve decided to add two more such orbs, one that details how the Black Ferrets gang came to be (which yes, weirdly enough involves professor Mandrake!), and one that features Professor Pine and Tannie working on the weapons they used when trying to defeat Zhamla.

The portraits for the mentioned events have been made, but now they all need expressions to fit what’s going on: 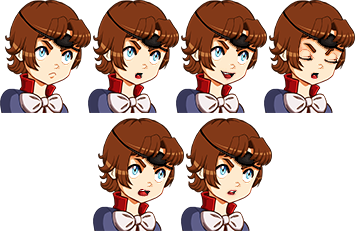 Meanwhile, a different piece remaining before the desert is fully ready for the stable patch is a set of treasure maps. These will be given to you by the archaeologist Finder, who is busy doing other things and cannot dig at so many places at the same time. So it’s up to you to find and bring back these ancient treasures to the archaeologist’s collection:

Perhaps by doing so, you might even get some sort of reward?!

As for the maps themselves, they too need to be made. And since you’re here and have read this far, you can have a look at them before anyone else: 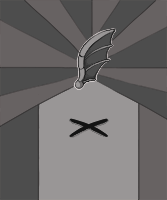 Can you figure out where to look for the treasure? :)

And now an update from the programming and animation department! Teddy and Fred have been working hard on adding the remaining Flashback Orbs, which which means there’s a ton of new sprites and animations needed. First one of young Zhamla casting a spell:

Vilya beating someone up:

Young mandrake’s design and animations of him walking threateningly and running away from something scary (wonder what that could be):

And a bunch of designs for an ancient piece of weaponry, once meant for Phaseman. Unfortunately (?) for the player, the piece ended up sold and shipped off on a certain ship instead. The first time we’ll see this ancient relic is in the flashback orb with Tannie and Professor Pine, but I have a feeling you’ll see it again, somewhere…

Since we’re adding a bunch of quests, drops and a few craftables, there’a also a bunch of items to be made. Here we have the given #1 favorite weapon for all classes, a book:

And the #1 favorite housing item for every player in the world, the cat food bowl in action: 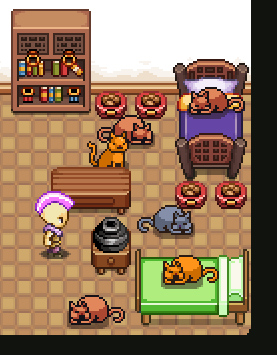 Who can’t wait to fill their house with cats?!