Now that the month has drawn to a close, it’s time to do a quick recap of what’s left for this patch, especially what we want to add to frontline (which is out already, by the way!!) and what we’ll save for stable – so it was high time for another meeting!

One of the things we’ve been talking about has been the boss drops. Right now only a few early bosses have boss drops, which aren’t even dropped 100% of the time, which is a bit weird even now that we’ve added boss rebattles in the arena. We had two options for this – either remove the boss drops altogether or let the boss drops be at 100% and add some more to other bosses across the game. In this case, we decided to go with the later, adding a bunch of new boss drops, including a seed allowing you to grow a Power Flower inside your house, an evil eye mask dropped from the evil eye in the ghost ship, a thorn worm cap allowing you to wear thorns on your head, and a cog shield dropped from the toy machine in Seasonne!

The Power Flower Seed brings us to the next topic, which is a plant system where you can plant seeds and have them grow in your home! How this will work is that you’ll find a seed, dropped from various plant enemies, and if you take the seed to the tree in Seasonne he’ll put it in a pot for you, which you can then place in your house. After some time, the seed will turn into a full grown potted version of the enemy you got the seed from. While this completed system won’t make it into this frontline update, we’ll start it up at the very least.

For the stable update, we’ll be adding Penn Wrythe’s novels, which will appear throughout the game in parts. After meeting her in Port Monnaie you’ll get to influence the way the final part of the story turns out, so think about your answers carefully! We’ll also be adding the cellar beneath the church in Port Monnaie, as well as a bunch of old books here and there across the game.

We discussed whether to add the player scaling feature yet or not, but we’ve decided to save that for another update – possibly the one after this one, where we go back to focusing more on Arcade Mode again.

Now, time for some last minute additions, starting with the final arena award, the arena hat:

Adding some backgrounds for Bishop in the journal, as well as a background for your character when they’re in Bishop’s own little realm:

Here’s something that won’t appear in this next patch, but is important to start working on anyway, namely our continued rework of the menu! In this step you’ll see me making a new layout where we’re removing the text titles of each inventory category and replacing them with icons (although the actual icons haven’t been made yet): 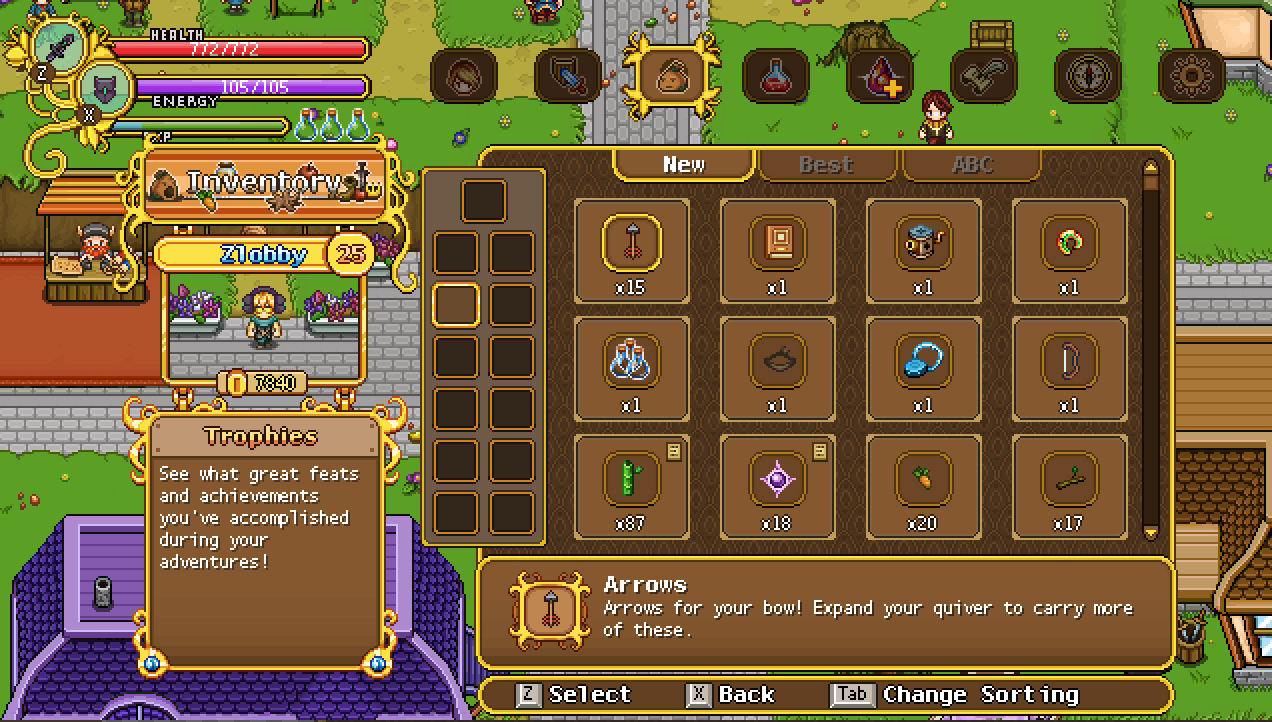 And as an additional bonus, a sneak peek of what Maracus Skill-to-Talent transmute looks like, complete with the awesome song made by our amazing music creator Andrew Riley of Lucky Lion Studios! Look at the old man go :3

Since we decided to make a bunch of new boss drops as well, I better get to work making those! Here’s a Power Flower seed, an Evil Eye Mask, and a Thorn Worm cap:

I also went ahead and made the drop appearance of the power flower seed all grown up for its place in the housing system, although you won’t be able to use it just yet (next update, maybe!)

Finally I was a bit cheeky and made my own suggestion for what the Toy Factory’s shield drop could look like, although it’ll most likely be edited and adjusted a bit by Fred:

And finally, here’s a little early sneak peek of three new collectors that will appear in the collector’s HQ or around the world, featuring a few more veterans, since we felt like the collectors all seemed awfully young: 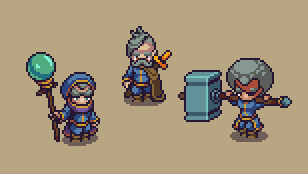 Now go forth dear friends and try out the new patch over on the frontline beta! Among the new stuff is:

* Three big but optional side “quests”/objectives has been added, you can find them in the lost ship, Pillar Mountains and Mt Bloom respectively

* You can now refight all bosses in the arena, which has been improved in terms of UI and has a few more challenges as well

* A new load screen and splash screen for everyone who has been working on the game; the game should also load more quickly

You can read the full patch notes over at the forums! And as always, all feedback is appreciated, please continue to help us make this game the best it can be, we value each and every one of your comments <3

Now, with this patch out and about, we’ll be taking a little belated easter holiday, since we haven’t had any off time for a while! The blog will be back as usual on April 26th, after we’ve had a full week back at the office with new content to recap for you guys :)


Great update , blasted through it in a second because of how much i grinded cards and items , only thing left to do is S rank on the last arena battle that is actually hard to get s rank. Anyways , thanks for continuing to work on the game!


I’m so proud of ya’lls work! I bought the game three times just because I want to share this great work.


This game is sick.