So… last week I was supposed to post a recap saying we went on a short Halloween-break, but forgot to post it since we were having said break!

Now, it’s not just the ending of Arcade Mode that we’re working on, but also expanding it and cleaning it up so it’s all nice and polished. In this Monday’s meeting, we came up with two new rooms we’d like to try:

First up, a room where you meet the fortune teller Astrid, who tells you which boss is at the end of the floor, and offers you an opportunity to change your fate (that is, for her to change the boss for another one in the pool). Whether or not this will cost you anything we haven’t decided yet – but it’s likely it’ll cost a bit of gold.

The second room we’d like to add is a “Caveling Casino” where you pay gold OR essence for a chance of getting one of a pool of items, which you’ll be able to see beforehand. The items can be things such as equips, buffs, pins, HP pots, or maybe just an apple… We’re considering giving you two chances as well, so if you spent gold on one try, you can spend essence on another – but no more than that.

This addition of essence as a currency on a run is something we’ll likely experiment a bit more with as well, giving you more ways to spend that stuff :)

Finally, we’ve decided to try out a pretty big change – but I’ll have to make a couple tests first to make sure it feels alright… And that is to have each of the shops and special character’s rooms in a run appear inside a specially designed map just for them instead of having them sit in the middle of an ordinary room. So basically the merchant would actually appear in a shop, shadier merchant might appear in a creepy temple like setting, and so on. However, since we don’t want to give away what kind of room you’ll enter in the case of event rooms, I’m gonna have to play around with making an entrance to the house which makes it feel like you came from the outside even though you as a player didn’t see an actual building to enter. It may not make much sense now, but I’ll make a couple tests and you’ll see!

We’ve also been discussing what sort of rewards you’ll get from that chest in the final room before battling either Bishop or Grindea! We want the player to get plenty of rewards, at least three for each level of difficulty, so it won’t just be a reward for the first time you reach the top!

Some of our suggestions so far include:

A diploma that shows you made it. Can be hung on the wall of your house, where it can be inspected showing a proper fancy diploma stating you reached the top floor.

A lood trinket that allows you to keep a Lood with you on your runs.

A Record player which is a furniture item that will change the music inside your house.

Riley as a NPC in Arcadia, who can change the music both in Arcadia and on your runs.

Angel Wings and Demon Wings to decorate your character. We’ll have to try out how this looks with the character’s animations, but if it doesn’t work out we’ll add them as hat versions instead.

A trinket that makes you character levitate when moving and in idle.

A trinket that gives you the same colour scheme as Grindea

and a Cloud hat!

…in no particular order. Do you have any suggestions of your own? We’d love to hear them!

Next up, it’s time to start looking into giving Grindea a proper background instead of the placeholder flying fortress platform she’s currently on! In this sketch, I’m playing around with some aesthethics, trying to give her a place that feels fully her own.

What do you guys think? 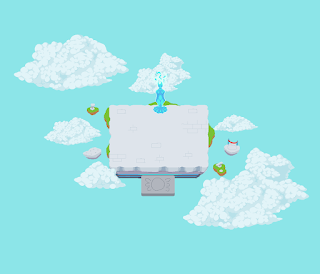 As mentioned before, we wanted to be able to include some indoor areas without having you pass through an actual building first, so I’ve made a little test featuring what it could look like entering a building from Seasonne in this case: 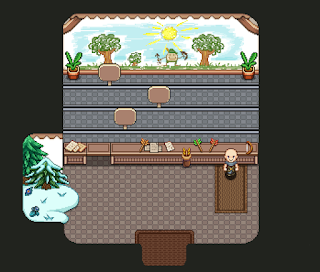 In this example, you’d be in a regular arcade mode Seasonne room, and expect to enter an event room to the right. Instead of going into another outdoor room, you end up in this house instead. Do you think the transition will feel weird seeing as there is no building to enter? We hope that by adding part of the outdoorsy area in the entrance it’ll feel more like you seamlessly transitioned between the two rooms :)

Meanwhile in Fred’s department, it’s all about Grindea, as has been for a while now! Let’s have a look at the most recent animations:


Hello there, nice to see the game so close to finished.

About the reward before the final boss I really liked the ideas presented, two suggestions that came to mind were a hat that looks like Grindea’s hair but less complex and something new on Arcadia (like a totem/token on the ground or a glow on the statue, idk…) implying the goddess has blessed the player.

The background for Grindea’s boss fight is looking nice, it might be something dumb to suggest but if I where to give it a more “angry” presence as if she was bringing her wrath down I might consider making the clouds/sky more tempestuous with darker clouds and less blue visible, then as the player wins the fight it all clears up.

I don’t personally understand the need of indoor spaces during arcade, but I don’t think it is bad either, anyway I feel the example shown doesn’t need the trees, just the snow would’ve been enough implication.

Lastly I’ve a small question, is Grindea’s sword in the last gif the final version? I kinda expected her attacks to match her color scheme. I’m not complaining, I’m just curious.

Everything I said was just my opinion, a humble fan’s opinion. Sorry if I spoke too much and feel free to discard everything I said if you prefer. Your game is incredible and hope it gets tons of new players when it releases.


Hey King Torden! Thanks for all the feedback, and no need at all to apologize :)

Regarding Grindea’s sword, it is that color for a reason, but we might still change it to match her body! We’ll make a final decision when she’s finished.

Thanks for your kind words!


Few words to say about the comments already made!
I would prefer Grindea’s attacks don’t match her body’s color. That way it will be significantly easier basically watching the hitboxes and not getting confused what’s the attack and what’s just Grindea herself.

Now, onto what I wanted to say.
YES to the wing cosmetics! If someone took their time to beat the hardest difficulty of the arcade mode, they should most definitely get rewarded with something as cool as these! I believe dumbing them down to simply a hat, however, wouldn’t be very fulfilling to the player however! Something nice and flashy to tell other people you did what they did not would be very nice, so I ask if you go through with this idea to not make them just simple hats!

Also, I would personally like to suggest something like the bishop’s robes as some sort of cosmetic. There is his hat, but the base character model doesn’t really… fit well with just the hood.


I’m still looking forward this game to finish early access.
I can’t wait for recommending this game to my favorite streamer !
2021 about to ends…


I think she’s “borrowing” that sword from someone else :3