This week has been patch week, meaning we’ve spent a ton of time doing bug testing/fixing, AND that the Frontline version of the beta finally has an update! This patch adds the final two floors, new event rooms and some adjustments to Arcade Mode. We still got some things to add, such as sound effects and some minor additions (some updates to the high score interface, among other things), but once that’s done it’s finally back to Story Mode and the final updates of that mode.

The Desert and Lost Ship floors are now added, as well as a load of new Event Rooms, revamped challenge-rooms, more perks, and more stuff that can happen during runs! Arcade Mode now also has its very own map, instead of using Story Mode’s, which.. really didn’t do anything.

Finishing a run awards players with Golden Essence which can be used to purchase rewards, both power-ups and cosmetic. After the run has “finished”, the player can also fight a final battle against two different bosses – the one waiting after a finished Three Catalyst run is an entirely new boss that’s unique to the mode.

This means we’ve also been spending some time working on the proper achievements for reaching the final two floors, meaning some graphics for that and a nice Solem Hat as a reward:

The Trophies that will serve as awards for finishing each challenge in a floor needed their own drop appearances, so that’s something we’ve been working on as well: 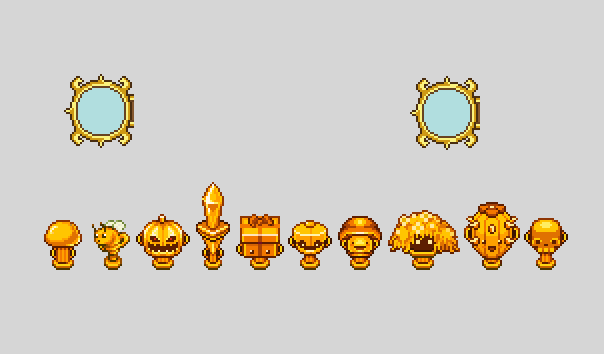 And of course, the wings are now available as rewards! Here’s what they look like, including Fred’s neat animations:

So, what are you waiting for – go ahead and try things out, and let us know what you think! As always, we value all of your feedback and would love to hear back from you guys! :)


Seriously respect that you guys consistently do these weekly devlog updates! Y’all put in so much work, and it shows. This is in my top 10 favorite games of all time, and I love that you continue to develop it after all these years. Keep up the good work! <3