Another week, and this one’s main focus will be all about GUN-D4M, or rather the upgraded more epic version you’ll face in the dungeon! First up, a slight redesign was in order, to properly differentiate him from the previous version! For this, we made a couple sketches to determine which one we liked the best:

We felt like the one with the lights were the cooler version, so we ended up going with that: 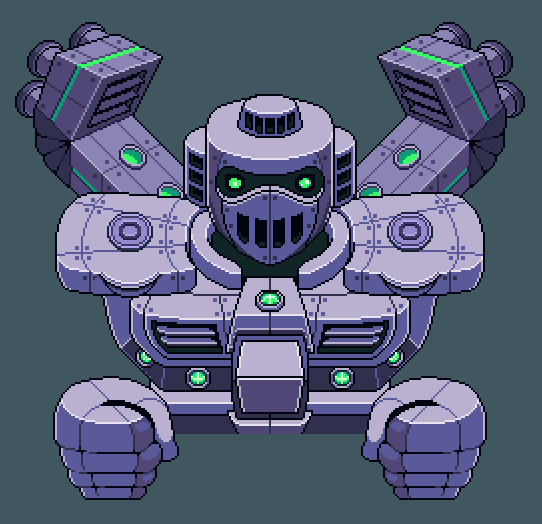 Some colour variations to get it all just right:

And after that, time to start animating that badass! Let’s have a look at one of his animations:

His fingers will feature a new weapon as well… Ooof!

And here’s a bunch of videos from our prototyping of this part of the battle, starting with the two Phasemen, going into the GUN-D4M portion of the game, and then finally a bit of how the boss fight itself will play out:

What do you think so far? We’re all very excited for where this is heading anyway, hope you are too :D


Oh no, Gun-D5M has been learning new tricks from Grindea! Who knows how powerful it may become…


Are there any news about the end of early-access? It’s been 11 years of development guys. Your work is amazing and it will be probably the highest selling indie game when it will be released, but it’s really a torture for players to wait 11 years without having an idea of the release date. Don’t take my comment as negative please. This is already my favorite game, but it is starting to seem a scam to people that bought it.


@ShinyBug The game basically says in the description of EA “Don’t buy me if you want a full game, because we want to make game good, not fast”. If people cannot read, it’s their problem, they shouldn’t be allowed to buy games anyway.
Also, this post talks about a progress they made in making the last dungeon. They are pushing forward, but they can’t say when they will end. The game will leave early-access when it’s done.


@ShinyBug I totally understand the desire to have a release date for a project after following it for so long. But, from my experience, with a team this small, time-frames can rapidly change depending on circumstances. Add to that, this game has been the developers life for 11 years and as such they want to complete it to the highest standard. So I would guess we would only get a end of early access date after the final main quest content is up on frontline. But looking at the content on this blog, it’s clear the ferrets are in the home stretch. I don’t want to over speculate, but a guesstimate could be the next patch going to frontline before the end of the year even.


@Miseris this kind of comments push people away from liking the game, not only me. My comment was genuine and spoke for many people that love the game but feel scammed for the slow development of it. It was just a request for infos (that the gentle @Andrew answered in a polite and intelligent way) by a fan of the game that until now spoke very well about it in many forums, chats and twitch channels. I won’t talk about development time of other high quality games that had 1 or 2 developers without even early-access, but they exists.

Your answer threw mud on this game dude, learn from @Andrew how to properly answer to questions that had no negative purpose in them.

Also, thank you @Andrew for your kind answer.


@ShinyBug
You’re probably not gonna come back here to read it, but oh well:
I didn’t try to be rude, but i didn’t try to be polite either. I just wrote my post without any emotions, stating a few facts:
1.Game literally says don’t buy me
2.People should read the description before buying something to not be surprised they bought the thing they did not want
3. There isn’t, and will not be any estimated time of full release, because even devs don’t know it and don’t want to work under pressure of time
4. We are writing under the post that talks about the progress of final dungeon. So people can track how much of the work is happening behind the scenes, thus come to conclusion that it is not scam.
5. The game will leave early acces when it’s done, not a second ealier, not a second later.
Personally I don’t see any difference between my two comments. If you do, I’m sorry my first comment sounded bad for you.