This week it’s finally been time for us to build a new area! It’s a somewhat traditional forest-y area which houses one new enemy, the bowman’s house and a mysterious mansion…

While it’s not in the game yet (soon!), here’s a WIP preview of what it’ll look like: 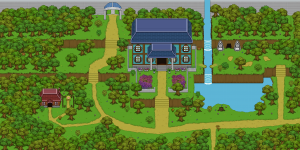 Yes, as you might guess that means it’s soon time for the bow to reappear in the game! It won’t have its own skill tree like the traditional weapons, but we hope you’ll like it none the less. We’ll talk more about the bow once it’s actually implemented along with the rest of this area.

As for the new enemy, it’s of course the boar that has made an appearance on this blog before! This time, however, it’s animated – and out to get you!

Can you name the Ragnarok Online inspiration? ;)

Now, back to area-building! With some luck, there might be yet another area available soon after this one.. :>


Yay! New area! Can’t wait to see when it’s released! The only boar I can think of from Ragnarok is the Bebe mount, but that one look WAY more gnarly, lol. Never played Ragnarok much, can’t really get into point n’ click games anymore…

Anyways, game’s looking awesome. Hopefully we’ll be able to see the other area soon too! ^^


savage babe perhaps? hahaha.. anyways it looooooks really cool. I can’t wait. YOU CAN DO IT GUYS!! I’M ROOTING FOR YA.


The final Touch on the animation was spot on Eldbolln!


Yeah that’s totally inspired by the Savage, haha. The Savage Babe was the small, cute, pink one that people could have as a pet. Awesome! Keep up the good work!


if you made this game an MMO it would be a hit!!


You know, you all keep saying Savage, which in fact, you are right. However, I was more under the impression of a forest, where you can get a bow, I thought they were referring to the area of the ‘Archer Village’ located to the east of Payon Town. xD


I’m so glad this ISN’T an MMO. The formula for them are over-used garbage. One of the reasons this game significantly stands out :) A multiplayer, homage to classic ARPGs!


I say either Savage or the Goats.


Forgot to mention the area looks nice and yay bow!


Savages! I remember them from the path to Morroc from Prontera, beautiful animations, I can’t wait for this game to be released, keep up the good job you three :D

I would suggest making the line that ends the water (http://puu.sh/1d1CA) a little more smooth, anyways nice work


Woo, will it have babies called Savage Babes? xD

Just became a GM on a server, it’s nice to see a game I was interested in implemented features from RO. :3