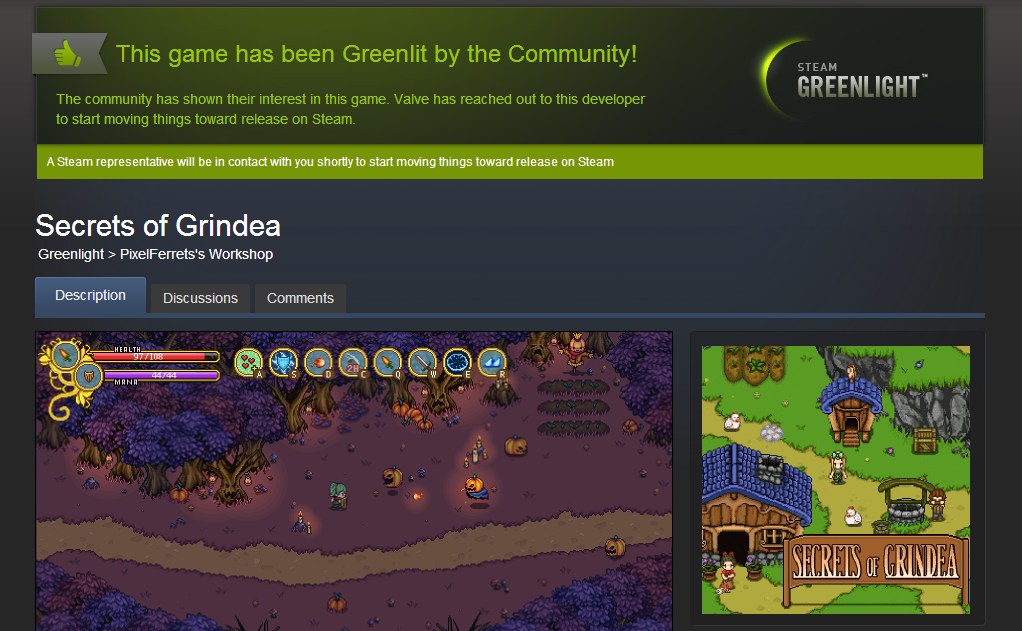 Even though we still got a fair deal of work left to do before release, we are all super excited about this. It feels great to have the support from Steam, and get to see that a lot of people out there likes the game so far.

To celebrate, we’ll be sending out a bonus batch of Beta Invites despite not being patch day! :D

So, for actual production this week. We kept the same theme as last week and dished out a new area. This time, it’s the western fields of Evergrind city.

These parts are mainly used as farmlands and are inhabited by a lot of wildlife, such as the pig enemy we showed off last week. From here you can access the Farm, which is where all of your caught pets will be stored while you are out on your collecting adventures. 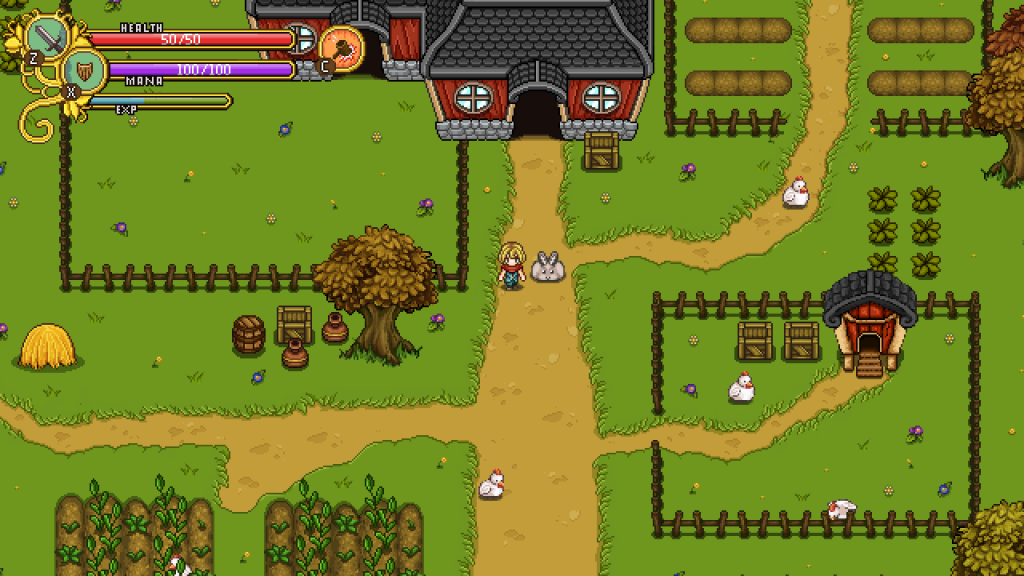 A slightly better home for pets than the Evergrind Café! 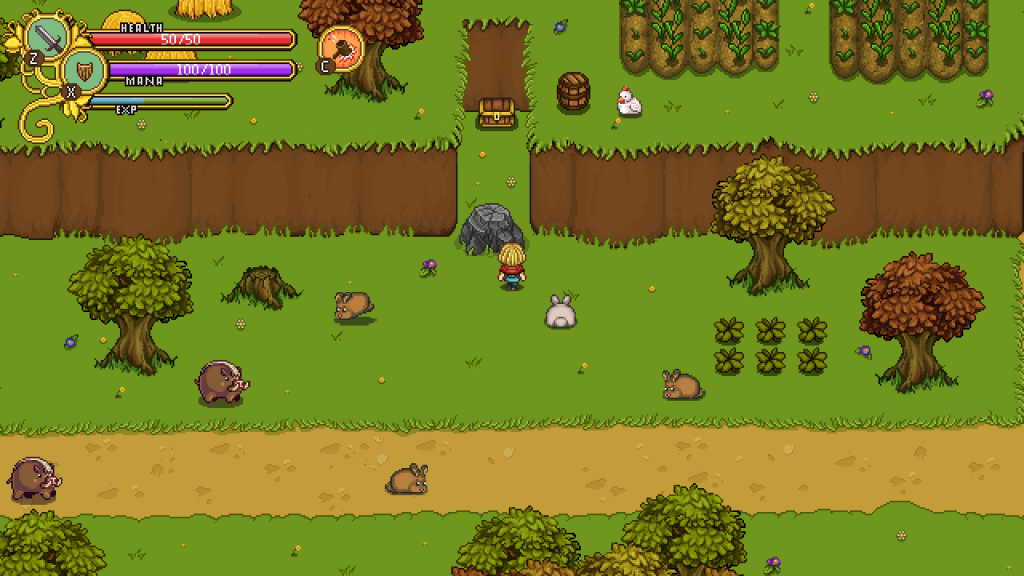 In the animation department, last weeks theme applies here as well. Our pig friend has gotten a bunch of new animations, including the attack, damage and death animations shown below, making him ready to take on any sneaky Collectors trying to turn him into bacon!


I’m proud to say I contributed to your greenlightening :D

In a side note, I absolutely love that “death” animation for the boar.


Nice job, guys! I really love this “A Link to the past” atmosphere.


Congratulations! it`s a really good news for everyone who saw this game (even if just a video))


Yep, I greenlit it!

But then again, thank you for doing such nice game!


I’m very excited to hear you guys got the greenlight! :)
I’m really looking forward to this, too bad 2013 seems so far!

Love the pixel work you are doing for this game <3
The boar turning into meat animation seems so smooth!


man…
ill never get to try this game :;c


Sweet news! congrats, looking forward to own this in steam =]!


I knew it’d be Greenlit! A game as amazing as this deserves nothing less! Congrats guys!!!


Really enjoyed the animations and pixel art style of the game! Hope you guys can finished it soon so that us unlucky fellows will get the chance to take a swing at it! Love you guys~


Congratulation Guys! i knew it would occur any time.
And the animations are great, Loved the death one, so funny. Keep it like that, this game has so much future!


I absolutely love the way this game looks. I have been psyched to try it out since I found out about it! I know my friends and I are all looking forward to playing it together, which will be perfect once this game is released.

The art direction is smooth and lovely and the retro gameplay style seems to be right up my alley. I can’t wait! :)


congrats on getting greenlit guys, knew you could do it! now keep up the good work so we can all enjoy this awesome game


The bunny needs to look more like the pig, they look like they are form two different games


congraz guys!
I was really happy when i read the news about greenlight on steam!
Now, if only i could be lucky enough to get one of those beta-keys…


I’ve just discovered your game thanks to Greenlight and have been looking at all infos here since. xD

It seems like a wonderful game with a lot of great animations and excellent fighting mechanics, but I really wonder about the length of the game. How much time do you expect it’ll take to go through the whole game? o.o

I’m asking mainly because of Wanderlust: Rebirth, another classic-like action RPG with coop function that recently got released on Steam. It was really similar in concept to your game and was indeed an excellent game, but the first playthrough only took 2-3 hours (even though there IS somewhat a lot of replayability thanks to higher difficulty levels, gear and skills)… And well, as awesome as your game looks like, I really hope it’d at least take around 8 to 10 hours to go through it. I’m also woried since it seems you guys took months to create a REALLY AWESOME CITY ( I can’t say that enough), but… yeah, is there much zones? And how much exploration time do you guys aim for?

Anyway, I find this project really awesome. Even with only 4 hours of play time, I’ll give you my money for it without a doubt. Awesome job on the animations and concept. You guys are awesome. ^^


Congratulations!
I’m really excited to play the game! It just looks great!
I’m glad to see that there are so many other people that like old-school RPGs like I do.


Have you guys thought about making a profile border url picture for promotion of the site? It’d probably not pull too many in, but, in proper eggman voice: You know what they say! The more the merrier!

You won’t have to worry about the game being short at all. The beta currently takes 5-10 hours to get 100% and it’s only a VERY small portion of the game. According to Teddy, the full game will have 10-15x more content! So you should be able to get a good 100 hours out of it! ^^


Please, guys, let me play SoG at your acc. I will not change password or doing anything wrong. I’m begging you. :(

You’ll have to wait like everyone else. The point of the beta is to get as much information from people as you can. By having new people join the beta here and there, its fresh eyes even from things you’ve had out previous for a long time. Its just the way they want to run the game, and I suggest that we all stick to it. Won’t be fair to them, or the community if the game was to go public with its current release.


Hehe, thanks for the reply, Elegroth. Sounds much promising. :)


This game looks pretty good. This game looks like a cool co-op game. Ive been waiting for such a game. And take you so much time as you need for working on this game and make it great fuller, because I want in the end to spend much time in to playing this game whit my friends. >:)


Even though to some people I’m wishing the world could end faster, but when can it be 2013 so this game can come out? D: *impatient*