It’s time again for our weekly recap – this time we have a bunch of random things, as well as some good news:

For a long while now we’ve had some pretty tough time communicating due to us living in 3 very different parts of Sweden. However, as of last week Fred and Teddy has finally moved back to Gotland and are now roomies – something which we really hope will improve the speed and quality of the production.

Their first mission will be to finish the main boss of the dungeon! We’ve been saving it since it needs a lot of fine tuning and screen pointing, which is cumbersome to do online.

As for the work we’ve done this week, here’s a bunch of random stuff: 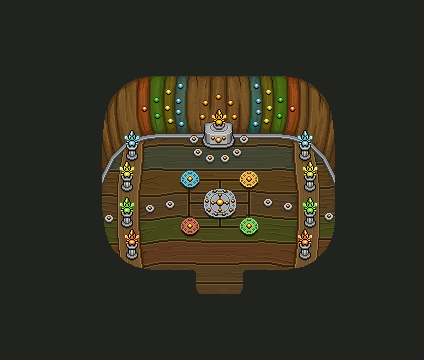 Here’s the interior of the treestump previously seen in a screenshot of the Fae village. This is where the Elder Fae gather to keep order in the forest and among their kin.

And while we’re on the topic of Elder Fae, we’ve shown you 3 before, representing Winter, Spring and Summer. Here’s the last one, representing autumn:

In the animation department we have an effect which you’ll see in an upcoming mini-boss fight with the mysterious Phaseman:

There’s also this a scary-but-kind-of-cute enemy roaming the snow lands we’ve been working on lately:

Lastly, we present to you the Ice Spike skill, a spell which we actually completed a very long time ago, but which we haven’t included in the beta as of yet. This skill will make ice spikes appear in the direction you’re casting it.

Click on the image to see the animated gif if it doesn’t play automatically: 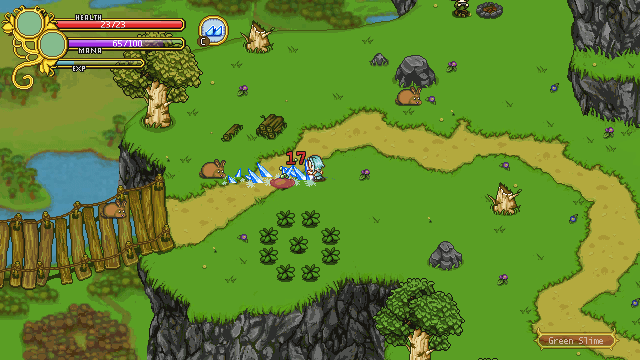 
nice work :D its cool to see how fast it is going on and the dev updates are really cool
Hope this project will become as popular as i think it will


Great job cant wait to try this game out, its just too good to not want to play. :D


Great job. I look forward to this update every week.


Love the icespike, it looks like dark souls dragons breath magic, just make it more usefull then it was in that game. =)))


What a cute bear!!!
Or a yeti? Ah, I don’t know, but it’s cute :)
And as I hoped, even more skills!!
You’re doing a great work – as always! I’m really going to enjoy Secrets of Grindea!
I totally agree with ark626, this blog is awesome!


Keep up the good work! It doesn’t matter if the game is released next month or next year, because undoubtedly, it already looks like it is going to be a co-op masterpiece.

Spectacular update once again.
The Ice Spike reminds me of Magicka, which is good.

Keep on the great work!!!


It’s been a while since I’ve checked in on you guys. Your latest stuff looks awesome.

I love how you are still managing to come up with great original ideas even though the game is based upon a tried and tested idea.

On the topic of making your main characters stand out, I’d suggest giving each one a their own characteristic that makes them unique (a crown, a long green cape etc.). This not only helps with identifying the characters without having to actually remember their names (e.g. “we need to find the dude with the massive mohawk”). It also makes it easier to identify the character from their sprites (as in their in-game sprites as opposed to their portraits) as their feature is a dead giveaway.

Anyway, keep up the good work :)


Even Starbound is doing a preorder beta now. Why won’t you? You already -have- a beta with people uploading videos of it onto youtube, there’s no sense in keeping it in such exclusivity.


@Fae They have said why before. If they release an open beta now, the majority of people that would want to play the beta would play it straight away. If they release it slowly, they get a consistent stream of fresh testers. After all, it is a beta TEST, not a beta preview.


That is great news that you guys gathered together, I am sure that will make everything go more smoothly. The Ice Spike looks awesome too! Man seeing all of those pixels and animations really brings me back. This game is going to be one of a kind! Best of wishes to you guys over there in Sweden and as always, keep up the great progress!


@Adam I didn’t say an open beta, I said a preorder beta. People preordering Starbound are getting access to the beta test of it.


@FAE I think you missed the point I was trying to explain. By open beta I simply meant that anyone could play it at any point if they wanted to.