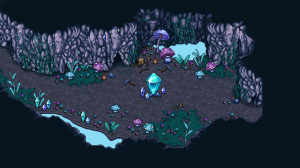 
I feel like the sections we’ve seen of cave zone (seen in the screenshot) look very similar and I could see myself getting lost. Whether that’s a good thing or not, I’m unsure :P

Also, if we are going to be seeing animations next week, does that mean videos? :D


Looks fun !
Maybe some light effects as someone suggested previously would make the whole area even more atmospheric.

For me, the underground areas could use a bit more shadows and contrast playing with light. Deeper shadows and source lightning around the crystals for example.


The caves look really nice, I love the colors. But as other people have said, some light effects could really help out. It’s not that important, though, looks good either way.


“Shadow Clone” looks scary!
I agree to McToast, more shadows would be even more awesome. But I guess you will update the textures multiple times as you did with the temple before.
But of course great job, keep it up!

PS: I hate captchas, I can’t read them…