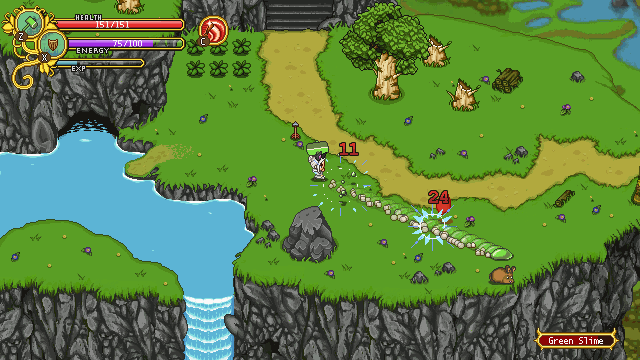 
Looking great. Can’t wait to give you guys money to play this.


Oh I was very aware that you hadn’t posted an update last week. I can’t tell you how many times I came back to check through out the week, only to be saddened each time!
I like the new attack, I believe I could implement it very well into a more strategic style of game play. However, it kind of bothers me how the slime flies towards an edge, hits an invisible wall, then explodes…


I just wasn’t aware of a beta, any way to participate? :D


Talk about awareness indeed. The suspense is horrible. If you dont mind in the future could you mention something on twitter? The new attack will definitely be quite the arsenal. It really wouldnt benefits anything to fly out of the play zone though…
BTW… not in Beta, retired, years of gaming experience. I believe I’d have a lot to offer.


I definitely noticed the lack of last week’s update. I’m glad you guys had a reason, though.

The spinning animation looks a bit off, in my opinion, ’cause the pointy corners just disappear when it starts spinning. That’s just looking at just the sprite/animation, though. It probably isn’t noticeable in game with a background and the critter moving while it spins.

For more beta invites, I know you guys take a random posts weighted towards the beginning of the ridiculously long, ever-increasing thread, but I’d ask that you take a look through the comments and invite people that have been giving feedback consistently. After all, that is what you’re looking for in beta testers. (I’ve only been following for six months or so, but I’m sure there are others that have commenting on the weekly updates far longer that you would greatly benefit from with their input).


Also, I just clicked on the gif and smash looks flippin’ sweet!


How do the spinning insects attack? Whirl and home in on the player like Gigaslime, or do they act like a Pong ball and just start rapidly ricocheting around the area / off of things? That would be a pretty neat enemy attack style, maybe a tad unpredictable.


Yeah! Arcade mode!
Smash is an awesome ability. If you want it to deal maximum damage, you need to position yourself right. An idea for the higher skill ranks (silver, gold) is to knock the enemies out for a short duration, if the hit a wall.
The spinning insect is exactly the type of enemy I hate! It is so damn annoying (provided you cant attack it while spinning)!

Cool update though!
And i totally agree to claudekennilol in case of the beta invites!


The Smash skills seems quite interesting, though judging from the youtube videos i’ve seen, two-handed just feels too sluggish for me in general. It’s probably supposed to play different from other classes, feeling slower and more powerful (maybe a little more knockback?), but in the arcade mode, where avoiding as much damage as possible seems a priority, i guess it could use a defensive skill.

Isn’t the arcade mode a nice opportunity to open the game to a broader player base via a demo/open beta/early access? There would be less spoilers (maybe place a few more rare monsters and fewer story bosses), it would focus on balancing skills and fine-tuning the gameplay and players could start honing their skills, developing strategies and setting highscores. After all, many people must’ve followed this game’s development though a 100 weekly recaps, every week hoping to finally gain beta access… so please end their suffering ;-)


Just one question. Where are u taking participants from for your beta? I used the side on desura…i hope its the right one to register for beta:P


I nearly clawed my eyes out every time I came to check for the recap, and it wasn’t up yet. Fingers crossed I get a beta invite, I’m so excited to play this game.


Hey, I just wondere how I could; -If i at all could, get into beta, anyone knows anything about it?

Some players, like myself, and Elegroth are of of the folks who got the first batch of Beta invites, and I’ve been following this game since nearly its inception. I can definitely tell you that the website that they’ve posted numerous times, the one being ‘Register here for Beta – Indiedb’ and whathave you is the one you want to register on.

And then, the waiting game. It’s hit an’ miss.


For those with no idea, it’s right here. Enjoy.


Yeah, I’ve been waiting for a loooooooooooooooooonnng time trying to get in, and it sucks. I want to give this a try so hard.