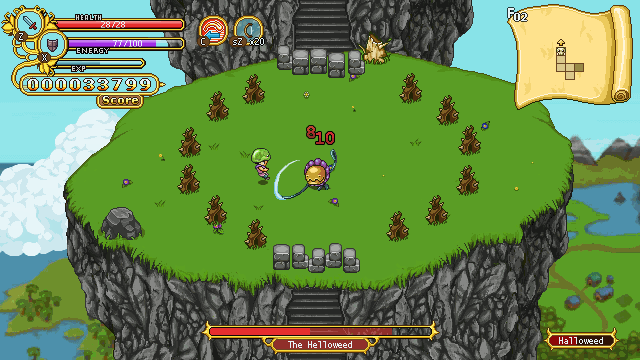 
Everyone update contains such awesome pixels. Keep up the good work guys!


That snow guy is so cute! I can’t wait to summon him.


That dash animation is just AWESOME !! Lovin the snowy minion too, can’t to see it fighting around! :)

Keet up the good work guys, this it amazing!


The frosty frined looks like the Poros from League of Legends with some improved animations! Awesome!
The dodging strike is a great new element which will increase the combat flow significant. It is a great variety to the shield. In my opinion, the effect from perfect guard is a bit too bad. It really need good timing and skill to block an attack perfectly but the difference to the normal block isn’t big.
A suggestion is that if you perfect guard an attack it stund the enemy for a short time (except the ranged ones).
A great artwork again done by Vilya. I like the contrast between the total pixel style and the a bit more resolution portraits.


Still excited for this game, keep up the good work guys. Kind of curious what your pricing point for this game will be, cause I’d pay shameful amounts for this game.

The Frosty Friend is amazing.
Hoping I can combo it with my cloud.
Using same resurrect as multiplayer would be plain awesome, making the summon that much more personnal.
I would also love to use it as a fast-walking, enemy-freezing (slow), bodyguard.


I just love the animation of Frosty the Sno- I mean Frosty Friend, being summoned.
:P


That frost minion is adorable. Can’t wait to see it in game.


Since there is no question and this is just your “average” amazing update, there’s not much to say. The blob looks really cute and anything else looks as great as always.
This game could easily be the game of the year 2013 (in my opinion, admittedly). Nobody said this award could not be won by a game that’s not finished yet. ;-)


Thanks for your comments, guys! Always great to hear back from you :)

@Sogomn: One ‘hidden’ effect of the perfect guard is that once you’ve blocked a hit your next skill will start charging at silver level (or as high as possible if you haven’t unlocked silver yet). For some reason it isn’t mentioned anywhere in the game yet, something we definitely should fix!

@Rodney Hahoo: Oops! That’s pretty inconsistent of us, haha! Gonna fix that ASAP, thanks for pointing it out :)