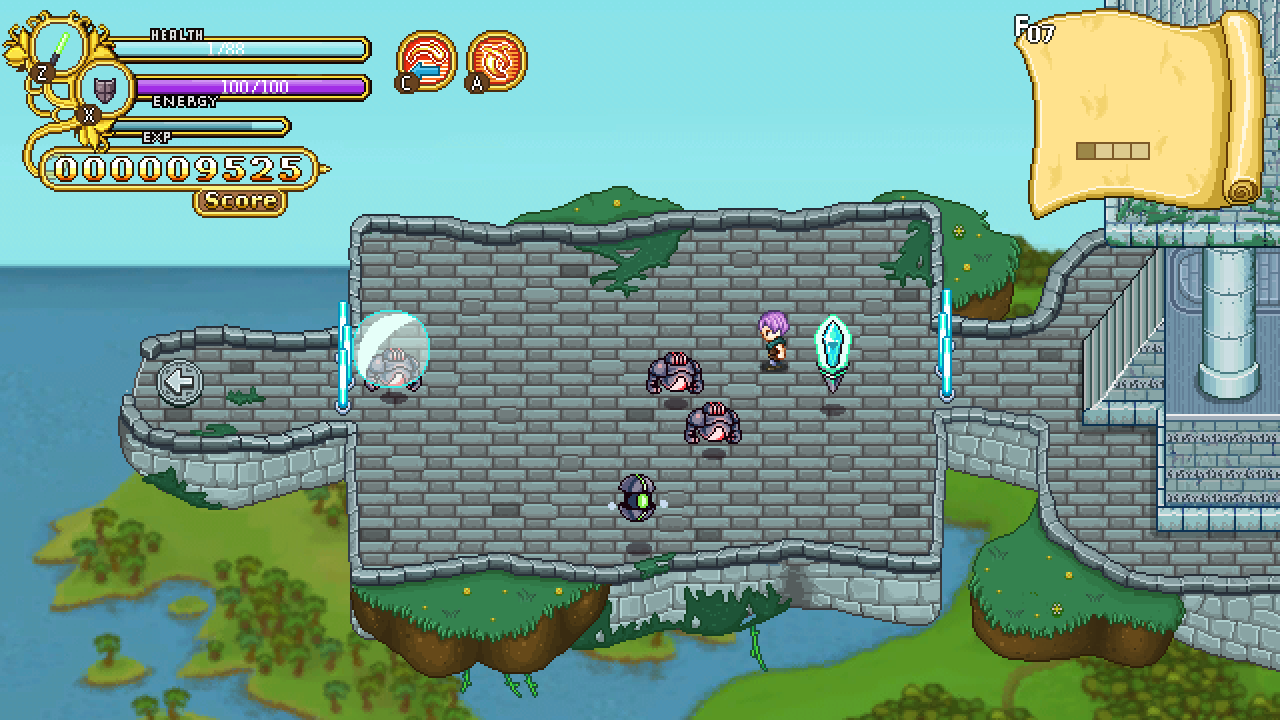 
Have you guys thought about different difficulty settings available to the player to increase replay value?


Charged up Frosty Friend “not as cute”? Take. that. back.


I totally agree to Antar! The charged version is incredible cute, especially because of his cheeks.
The arcade mode totally rocks! I love it! The new Stages look very good and I’m looking forward to play them!


Could you please release the Game? I hate this waiting^^


I decided not to complain this time regarding the game not being released soon enough for my greedy little hands to get on it. Instead, I was wondering about the “grinding” aspect of it. I like the idea of being able to craft items (i.e. starbound/terraria style). That said are you going to have some kind of mining system in place? Or can you plant a farm Harvest moon style? Even if the world map is static and has very little environmental interaction, you could create “mines” in each area that give you better and better ores to upgrade equipment you can find if you wish to. Just a thought I had, as always a giant fan of your work and absolutely cannot wait for it to come out. Thanks!


You guys should release this game on Early Access so that we can finally play it lol.


Is the forum on desura still the best place to register for beta and how many people realistically get chosen.

I guess the fact that there was a beta sign up almost 2 years ago gave me more of a feeling of actually getting a chance to be in beta than it seems is even possible.


The game looks like it really coming along. It’s nice to see it all come together.

I was pleased to read that you had decided to change the damage indicators colours as this was something that jumped out at me while playing the beta.

I’m still amazed by the artwork that’s being produced for this game. Good job!

I can’t remember if this has been answered before so please forgive me if it has. Do you have any plans for a matchmaking system so that players can find/join each-others games easily (without having to request IP addresses)?


I’m starting to fall into the “wake me up when it’s done and we can play” frame of mind.

Since it was already greenlit on Steam, I guess I can just forget about it until I see it pop up there.


Rodney, how about we stop using the “threat” tactic to get the devs to release the game -.-


Been a good long while since I checked on this game, and it’s good to see it has gotten a lot of updates. It feels a bit off with the colors of the damage numbers in the latest change though, personally I’d like to see it the other way around, player damage be white and monster be red. Maybe you could put sliders or something in an options menu so you can change the colors of each type of damage on your own. Anyways, good job so far fellas, looking forward a LOT to this game!


What threat tactic? I’m not threatening them at all, just saying that the tiny updates without any sort of release is not doing it for me personally anymore.

Nowhere in my post was I threatening them at all. I’m still going to buy this when it comes out.


@McCaferdy: We have two story mode difficulties right now. Normal is decently challenging for most people, and Hard is very difficult. Then we have Arcade Mode, for an almost ridiculous challenge!

@Rodney: We totally understand! Not everyone finds the detailed process of development interesting, and we’re honestly a bit surprised at how many do enjoy it. When it’s released, you’ll probably (fingers crossed) hear about it :P

@TheOrdeal: We might do something like that if it becomes a common problem and people find it difficult to adapt!


Sorry Rodney, It’s just I always see people threatening developers by saying they will not purchase the game to “scare” the devs into hurrying up.


Wouldn’t it be better for damage done to you to be red so that it stands out against all the white damage you would do to enemies?


Rich I think that’s how it is right now.