This week, as you can probably imagine, we’ve been pretty busy with preparing for the upcoming pre-order! We just updated the beta with what we hope will turn out to be a stable build we can use for the pre-order launch.

Besides all the administrative work (setting humble widgets up, making the pre-order site, etc), we’ve still hammered away quite a bit on the game! For one, we’ve added a new little main quest to the Pumpkin Woods, to make players experience the atmosphere a bit more before moving on to the temple. If you’re in the beta and have som spare time, please try the quest out and share your thoughts on the forums! It’s supposed to be played between the exams and the first temple, story wise.

We’ve also worked a bit on removing some player confusion. First off, pets now have a small aura so they can be distinguished from their bloodthirsty, farmable counterparts: 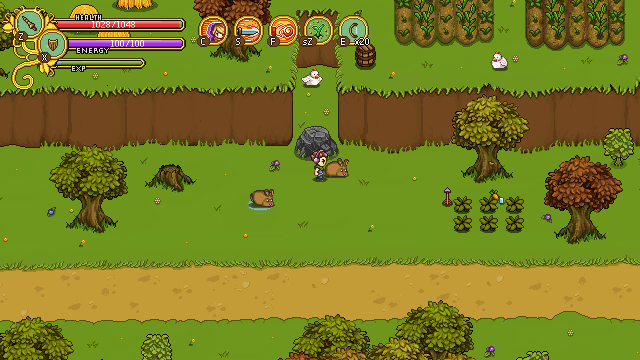 We tried to keep it subtle yet noticable, so you’ll
know what cute things to murder!

Another thing that wasn’t all that clear to player is that you can jump down certain ledges! To help with this, we’ve added small arrows that appear when you get close to a ledge from which you can jump down. If this doesn’t work, we’ll probably have to implement escalators instead. 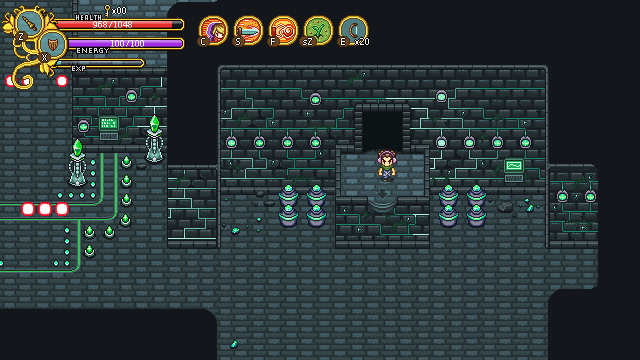 Wait, how did he get up there without turning off the bullets?!

Apart from this, Vilya has kept on updating portraits to the new style! Here are a couple of them, step by step:

As for Fred, he’s been working on some juicy animations for the new quest as well as the enemies of the Season Change Temple, who are slowly but surely being brought to life! The knight has taken its first steps while the Wizard is doing his best not using feet at all.


I can’t wait till this game releases, I’ve been beta testing for companies that used to release these games on the SNES I can’t wait to get in there and throw a bunch of tips at ya :). Here’s 2, tiny bubbles or triangle over your pets make for much better distinguishing then auras, also the little ledge arrows are definitely a must when you have the chance make them have a little color pointer on the end and like 3 little lights that light up in sequence so you can easily see which way to go.


I’m wanting to play this game so much. You guys are so talented. Keep the hard work!


http://youtu.be/jVrA_-Va4XU fast forward to 2:45 to see what I mean when referencing the lighting for the arrows, I hope that clears it up :)


I like the arrows – to obvious and shiny would kill the atmosphere, i think they are perfect and hope that you will just have to adjust the distance from which they can be seen ergo how soon they pop up.
As for the pets – you could consider the pet changing its color ever so slightly to be different from the wild animals of its species, but… I dunno… Or give it a collar? make the player even choose the color of the collar. that would be nice looking, wouldn’t break the immersion and you could easily distinguish your pet from others – even you pet from the pet of another player if they have different collar colors!


I like the new Avatar artstyle. Its alot cuter than befor but still recognicable as secret of grindeas own style.
Keep up the good work, I am exited for the steam alpha release


You’re doing a great job, guys!! And I can only be so eager to get my chance to play this, even if still in beta stage. I haven’t seen enough videos of it to be sure I’m not just saying silly things but I’d say the pets reacting to situations would be a nice “small” addition. For example, one of those bunny pets. You go fight a big scary monster and the pet cowers in a corner while you fight the mob. Wouldn’t be funny? xD

@Alex: Too much distinction might become annoying and may be misleading (one would see it more as a target rather than a pet). The arrows… there’s no need for neon lights pointing the way, right? At best, making the arrows a slight red would be more obvious but it’s not like they want to make it look like jumping down the edge is the way to go, right? Let them keep it simple.
(^.^)


Since I’m the one doing all the animation stuff, I can comment on the pet stuff.

The reason we haven’t gone with a collar or any other appearing changing item is just as Illanyss pointed out, it’s a time saver. If I have to make a collar for the Rabby, that means I have to do similar, unique graphical changes to all pets (and we are planning to have quite a lot of pets).
Making those changes is not that time consuming in themselves, but since I’m the sole animator, making any kind of time save anywhere stacks up over time! “Många bäckar små” as we say in Sweden ;D

I still have the intention to add some kind of unique flare to the pets once they reach the max level, to set them apart more. There’s just so much stuff that are way more important at this point. I’ve added it to my “Want to add, don’t have time right now”-list. A list that’s starting to get pretty massive ;D

As for the color, it is possible to change the color of your pet. Not everybody wants to though, so the aura helps in that regard.


I’ll have to find some time to tear myself away from ESO to try out that quest in the Pumpkin woods. That area was too good to not force the player to stay in it, so I’m sure this is a good change.


The pet aura is really helpful! I caught myself multiple times trying to whack my own Rabby!
I am really looking forward to the new temple / dungeon. But though I cant wait for the finished game, please do not spoiler too much content in the weekly updates. ;)


Could you make the aura optional? This way whoever does not want to see it can just turn it of (for example people who have changed the color of their pet).
How will you manage multiplayer? Will every pet an screen have the same aura or will there be multiple colors for “my pet” and “others pet”?


Wow, the more animated gifs you guys post, the more I am amazed at your work. I really love how smooth the game looks and the general art style. Great job and I think the aura and arrows will most likely be very helpful. Gotta love that wizard animation! :3


You don’t have to copy the arrow artwork from the other games, I was simply saying it would be nice to put something in to make it a little more obvious that’s all, it won’t take anything away if you base the colors on the surroundings.


This has been bothering me for some time now. I don’t know which portrait of the girl with the veil I like the most. The 2nd portrait looks more mysterious and gets your eyes’ attention (probably due to bigger pupils and less shades and nose) but the 3rd is more detailed.


– Any news on the price?
– I’d prefer to have something like a ribbon, leather necklace or a hat for my pet, instead of an aura
– It should only have an aura if the aura has an effect
– How about pets with effect auras? :D


Listoric, they stated in this blog update why they won’t do something like a collar or other accessory. It’s just too time consuming and they have more important stuff to work on.


Hello.I want to report a BUG I found when I play this game.At first, this game is really a great game. I think it will make itself famous in this world.
————————————
Now here is the BUG: when I work at the third place where there are so many robots,I try to read the instructor of the perfect defense.However ,the game stopped and hang out.I don’t know why and my platform is windows 8.1.
—————————————
Thank you all for make me have a great night when I game through the whole game of the beta.