Last week was all about PR, customer service and whittling down a horde of bugs, but now things are finally starting to look kind of normal around here! As such, we’ve actually gotten some “new” stuff done.

A couple of days ago we added a feature which we’ve mentioned before on the blog but never got around to implement, namely the memory room! 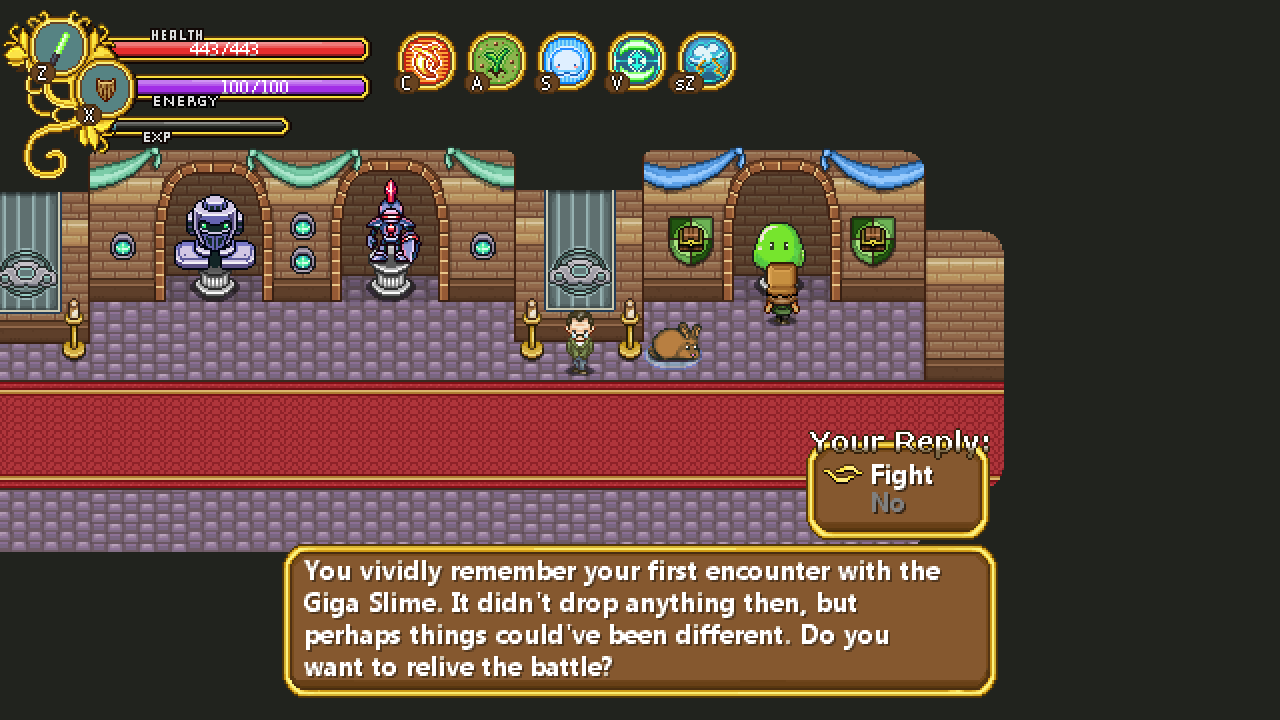 Many of our bosses drop items just like regular enemies, and will eventually also drop cards. This creates a little Collector’s dilemma, where if you don’t get every drop the first time you defeat a boss, you’ll have eternal holes in your item codex for all eternity! That is of course unacceptable in a modern society, and that’s how the memory room came to be.

For every boss you defeat in the game, you’ll unlock a statue in the Memory Room. By interacting with it, you can then choose to relive the battle in order to farm items you didn’t get the first time around.

Currently, the feature isn’t very balanced since the boss drops are both strong and worth a lot of money. That worked well when the boss items were rare, but less so if you can fight them an infinite number of times! While the economic aspect can be solved by making the items sell for less money, the issue of having easily farmable but very strong items is a bit more tricky.

There are a bunch of ways to deal with this, though. One is to simply add a fee to battle memories, so you can’t fight over and over without cost.

Another is to adjust drop rates when in a memory battle. Boss drops have pretty high drop rates to compensate for the fact you only fight a boss once, and we’d like to keep it that way for when you meet them on your natural journey through the game but obviously it doesn’t work when you can farm the bosses.

A third option is to rethink the drops which bosses have, and only focus on either flavor drops (style hats, furniture, etc) or crafting materials that require at least another rare material. That way we’ll prevent having boss farming be the be all end all way of getting certain gear upgrades. We’ll play around with it until we get something that feels nice!

Marino, our Gary of the game, has received quite a make over! The main reason for this was that the old sprite looked a lot like the officials of the Collector’s Headquarter, something we wanted to avoid to set him apart more.

Since Marino is a recurring character, he needed to be able to do more interesting stuff than just walking around being smug. Below are a few animations foreshadowing things to come!


I strongly believe that the focus should be on the game development and not the balance of the game, this is something you should focus on once the game is done feature wise, in my opinion. (I don’t mean to sound rude, I love your game and it has potential to be one of my favorite games once it’s finished).


@Jonathan: Without balance, a game is unplayable. Balance needs to be addressed as the game is developed, that’s part of having an open beta (especially if they’re charging for it). Balance should be an ongoing discussion and given plenty of time for feedback and testing. If they play with a few variables now, they can fit it into the game better or possibly change what happens before or after depending on the change in balance.


I’d say keep the high drop rates on the first kill, reduce the drop rates for the memory room kills, add a fee and add an unlock feature to it. Like, you can only fight the first boss after you reached a certain level or after you’re at a certain point in the story. That’s what I think would give some balance to it :)


Marino looks much better for me now!

Thank you for the game! The level of details is fantastic, it beats even most of already released games.


Hey guys, the game looks better by the day!

My two cents on the boss battle conundrum: if you want to keep the drops constant, you could always increase the boss’s difficulty (higher strength, speed, hp,etc). This would also encourage a co-operative aspect to defeat the insanely difficult bosses.


Aye! I personally prefer the new Marino, it looks more royal which makes him even more unsympathetic. The memory room is very good. Sometimes I want to fight a boss again and thats only possible in very few games. Really good!


My suggestion as to the boss drops is to keep everything as it is, but change the drop mechanic so that if the player has ever had the item, then the boss isn’t eligible to drop that any more.

It’s ok grinding random mobs that respawn pretty constantly for a low drop rate, it’s gonna get super boring grinding bosses over and over if the drop rates are lowered.


@claudekennilol – I agree about the lowering the drop rates for bosses. You want to be rewarded for defeating the boss.


I agree with Illanyss. I think it would be best to let you fight them again and again only when it is less of a factor. That is, make it so you can fight the first boss over and over only when the items you receive wouldn’t be such a big deal.

It wouldn’t have to be a 1:1 scenario where the items are worthless, but far enough along where if you want to grind them out they would help, but not so much you would be overly powerful.

The cost could also work towards this same goal. Making it cost relatively high amount so you wouldn’t be able to initially replay it, but as time passes and money is less of an issue it becomes easy to replay over and over.

Depending on the drops you decide, you could always just have the vanity items droppable from the boss right away if you choose to battle them, then hold out on the higher more powerful items until later in the game.

I’m sure you guys will figure it out! Best of luck and keep up the good work!


I would say reduce the worth of the boss items, and for any recipe it is in just make the recipe need more then 1 boss item but make it like 3 or 4, that way a boss seems more fun to me, I enjoy fighting bosses I fought before its a good indication of your current battle strenght, I mean I can fight a slime to asses the power of my character but one hitting things dont give me all the data I want :), Other then that keep up the good work :)


Could so something in the style of Terraria, where you have to craft the boss to fight it (for repeated attempts), e.g. the giga-slime could require X amount of Slime Gel, and for GUN-D4M some robot parts and crystals. Considering it’s called Grindea, that’d be appropiate :P


I think you guys should add a price to use the memory room.
Ex: To fight the slime boss again, you have to pay 50 “normal slime’s loot”


I quite like the idea of having to pay a fee to battle memories. Not only do you solve the problem of overpowered farming, but it also make it more important for you to win the battle.


Yeah, I think a fee that is just slightly less than the average amount earned from the fight, would make sense. So that it’s still a way to “make” money, but only as much as you would make farming anything else. Plus the fee would help you to set the drop rates at whatever feels right for just collecting and filling out the drop sheet. Then tweak the fee to make the average profit feel right. The fee also would help to curb just trying to kill them over and over right away to make sure you are always wearing boss quality equipment drops. Because you have no guarantee of profit from a small number of kills.


Oh wait!, I somehow missed EmElw’s post, that is the perfect solution. Crafting requirements for farming bosses. Might take a bit to figure out exactly how many materials feels right, but it would be the most fun solution.

And I’m sure you guys are always trying to think up more things to use monster drops for.


I have tried the memory room and I loved it! Hopefully after all of this balancing it doesn’t become a hassle or too expensive. I also like the new Marino better than the old one. The hair fit’s him better and the rapier is cool. The way he wiggles his fingers really gives him character!


Okay so, will the game auto-update? Or will we have to do it manually? I’m not seeing a different Marino or the Memory room..


Thanks for your suggestions guys! We’ll think about them all and see what we come up with :)

Check this thread for info on how to swap between beta versions: https://secretsofgrindea.com/forum/index.php?threads/how-to-switch-between-stable-and-frontline-and-why.127/