We kicked off last week by doing a sneaky little update of the Frontline beta, containing the final boss fight of the Temple of Seasons. While it isn’t 100% ready in terms of graphics and cut scenes, we really wanted some insight in how people felt the fight played. We are reaching a point in the game where the difficulty is starting to really kick off, which makes the beta testers more important than ever. Making a boss or area hard is easy — making it fair and fun is the tricky part!

Anyway! With some much appreciated help from our loyal beta testers, old and new alike, we got a good dose of feedback and critique. The general vibe was positive, so with some more tinkering we’re hoping we’ll end up with a boss you’ll enjoy getting your asses kicked by!

Vilya took the time to clean up the room of the boss battle, pulling her (presumably) last straw to the second dungeon-stack! 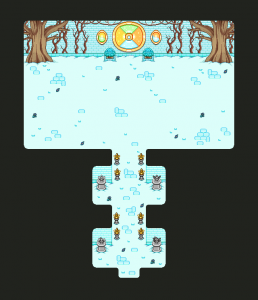 While not there just yet, Fred is nearing the finish line on his end as well. With all of the actual battle stuff for the boss out of the way, the cut scene animations took center stage!

So while Fred and Teddy have been working on the final touches of the temple, Vilya have kept speeding ahead and started working on the next big area of the game. Still nameless, we’ve settle upon a Desert (with some twists!) that will be the connecting area to the fourth dungeon. Below are some prop and color testing: 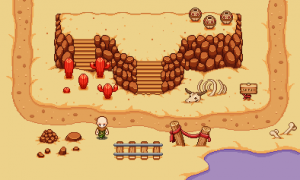 Now we know, desert areas in RPG don’t generally tend to be anyone’s favorite. Heck, even 2/3 of Pixel Ferrets hate deserts in RPGs with a deep and devoted passion. Therefore, we’re more determined then ever to infuse it with as much care and love as humanly possible to make it stand out! With some added Pixel Ferrets magic, we might end up with the first ever enjoyable RPG desert. Fingers crossed!


Great rendition of the desert, this reminds me of the earthbound deserts, I loved them too!


I think deserts are pretty cool in games, I’ve never heard of people disliking them. Hopefully we’ll see some awesome dunes! Also keep in mind that deserts aren’t just sand. there are many places where it’s dry and rocky and not just a sea of sand. Check out some photographs. Hopefully that can give you guys more ideas.


I like it, it would be cool if you could only walk in the desert for a limited time unless u had water to make it more diverse and challenging.


IMA FIREING MY LASAAA!
I like the desert preview. However, you could make the colors a bit less intense, imho.


People don’t like deserts? D;
They are my favorite!


It would seem like deserts are nearly as widely liked as desserts!

I’m surprised, since deserts are the source of all evil, but it’s also good news considering we’ll have one in the game!


2 deserts I hate(d and now like) in RPGs:
– Terranigma: To cross the desert you need to follow a specific path, otherwise you have to restart.
Zelda – Ocarina of Time: Same thing.
While I generally like the idea, the first tries were pretty annoying.

2 deserts I like in RPGs:
Secret of Mana: Those vortexes with the sandcrabs can be annoying, but it was a refreshing, cool idea back then. And you need cool things in the desert. ;)
Secret of Evermore: There is a huge desert in the 2nd time period (Antiqua) where you constantly loose health. Entering one of the few oases out there replenishes your health and the whole situation felt very climactic back then.

And since I never find the time to post in the forum there’s one point I always wanted to state: While I really love the game so far and most things feel awesome, the game also feels pretty short. The Haunted Woods, for example, are just two screens (until now) and even the quest(s) there do(es)n’t expand the “feeled time span spent there”. In short, I would like to see more screens such as in Secret of Mana with its lengthy dungeons / areas.


Desert is a great idea, as enemies you guys could use scorpions, Snakes, The thorny devil (My favorite, search on google for this one) and some cactus.

I Don´t know where you guys plan to put this map at,but i think you guys could use the place where the temple was before it flew away since now its just a empty and kind desert there…put some quests before unlock the desert so people can get there after done those.

Another Idea I have to share is to put one quest before open the door to fight the winter fae boss. the quest is:

Get 3 essence of seasons that could be found in different part of the game, one in the hallowen area, other in the snow area and the last one anywhere you guys feel like lol. after get all of than the player should go back to season temple and use than to light up those season artefact that is located close to the door and break the magic to open it… It would make a couple more hours of gameplay with not much work on level designing..


Sweetness, the desert is a must have! I can’t wait for the next part to be unlocked. This game has given me so many flashbacks from when I was a kid, playing games like Zelda on the Snes, Secret of Mana 1&2(Seiken Densetsu 2&3 jap) , Secret of Evermore, Terranigma(specially this game). Great memories brought forth by a great game.

I have a few questions tho:

1. Is the level capped?
Cus I can’t seem to get past level 17 on my character. The exp bar has locked itself in the halfway through:P

2. Is that quest where you have to get the the two turkeys bugged? or is the santa character look on that woman supposed to look like that and not let you finish her request? x’D
In anycase, if this isn’t the case then i should let you guys know that she doesn’t let you finish the quest and get your reward.

-!!!ANYWHOM!!!-
Really great work guys, I will def report any future bugs that i encounter :’D